Curves at the Central Public Library

Calgary’s new Central Public Library is an amazing space for many reasons. Last night I enjoyed circling the exterior for the first time, photographing interesting features at interesting moments as I went. 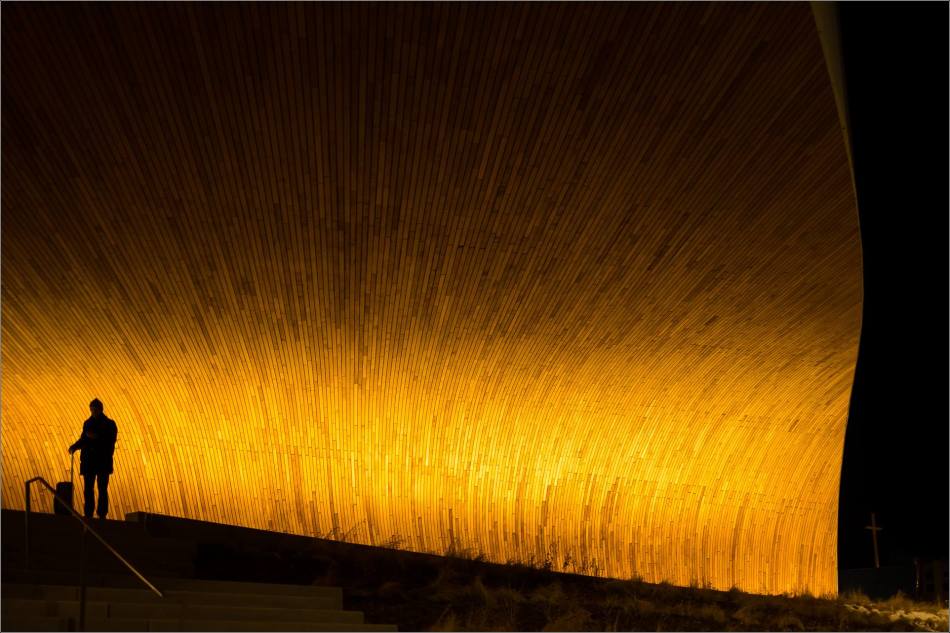 Above a patron standing at the stairs near the main entrance is silhouetted against the beautifully designed curving wall that leads to the doors.  A minute later, and a few steps to the north, a fellow photographer captured the curve in his own way while sitting outside.

La Joute – a fountain of water, fog and fire

Recently I was in Montréal and my first destination was the Palais des congrès.  A stroll down Avenue Viger led me to this convention centre and the beautiful façade of colorful glass windows that drew me there.  I crossed the street to frame the windows behind the fountain in the park there.  La Joute is the name of the sculpture fountain and it breathes fire!  I didn’t know that when I arrived though.  Standing at the edge of the fountain’s pool, I overheard a boy ask his brother when the fire would start so I decided to wait and see what would come next. 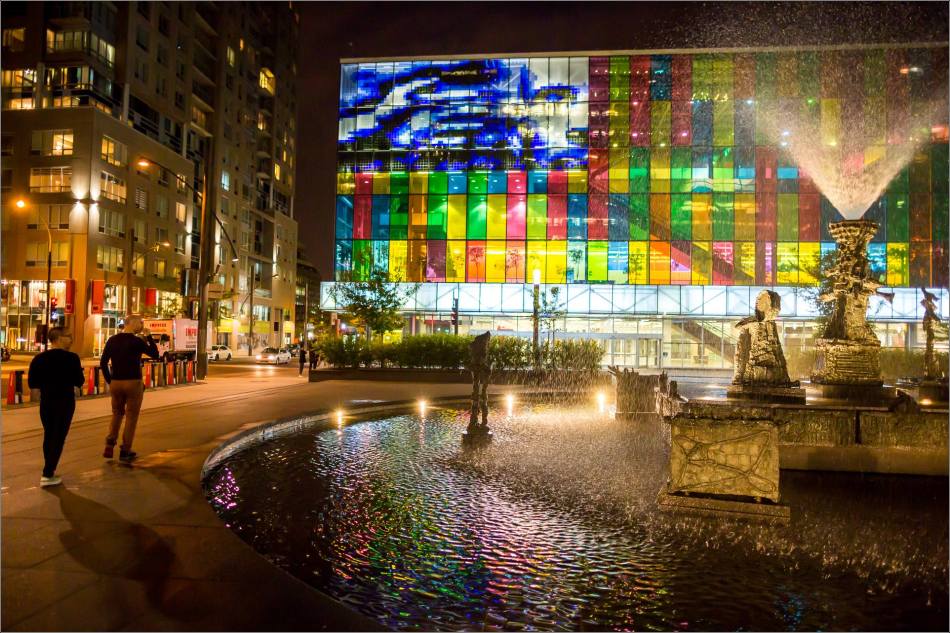 A few minutes later, a thick haze started to roll over the water and soon covered the pool and rose up towards the bronze sculptures of animal and human figures.  The presentation was impressive and had a gentle flow as it moved from water into fog.

A few people had gathered and were enthralled, as I was, when the first flickers of flame began to appear around the central statue.  These flames connected into a complete ring of fire and rose a foot or two off of the water. 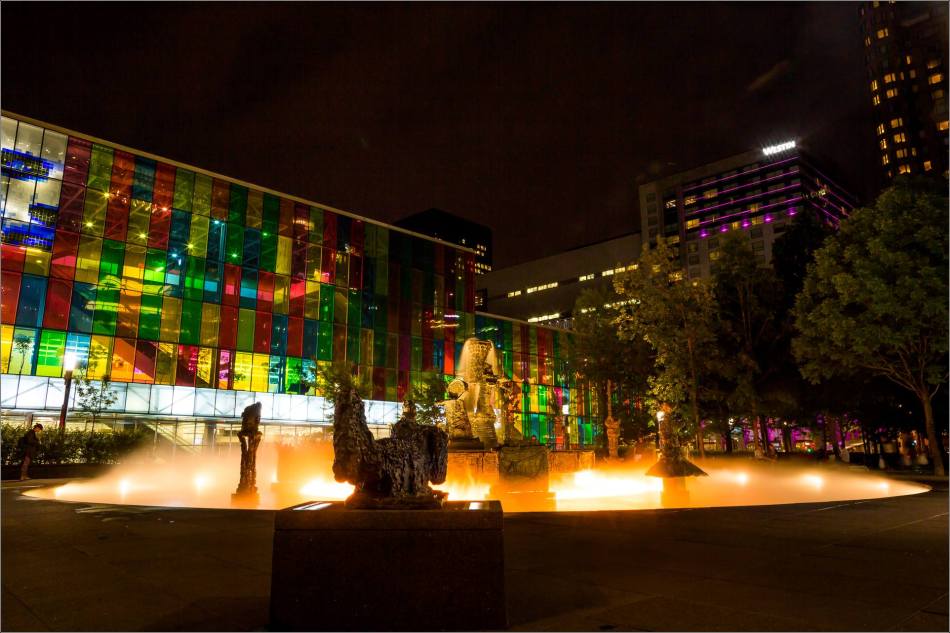 The backdrop of the Palais made for a lovely atmosphere and a great scene to photograph throughout the sequence.

I was out on a windy hill east of Calgary’s downtown core on Monday night photographing the city center at sunset. There were some great clouds that soaked up the light to create some beautiful hues that reflected into the buildings. As the sun fell, stray light would find a clear patch through the clouds and then bounce around the glass on the buildings. A beautiful scene to photograph, here are a few from the evening. 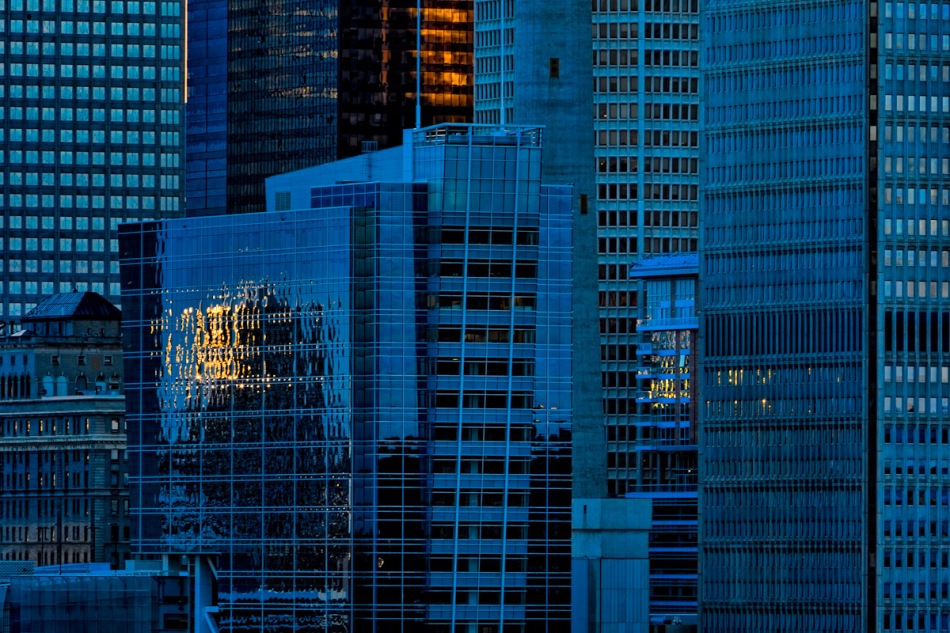 Although it is no longer the tallest building along the skyline, the Calgary Tower is still an icon for the city.  This is a different look at the building as dusk quickly advanced.

A view of the whole downtown as the sunlight waned.

We were invited by Alvise and Paola to enjoy New Year’s Eve at their home on a corner of their Folk Tree Lodge property last night.  Very glad that we took them up on the invitation as we joined a small, wonderful group of people for a delicious potluck dinner, skating on a pond with a bonfire in the middle and a steady stream of good conversations.

Paola and Alvise have a very beautiful property just west of Bragg Creek in Priddis and it looked amazing as I wandered the path between the house and the pond.  I had to take a few photographs away from the evening.

Thank you to our hosts and the other guests for ending last year on a great note.  For those of you who might be looking for a retreat in the Bragg Creek area on the edge of Kananaskis Country in Alberta, Folk Tree is a special place run by a very special family. 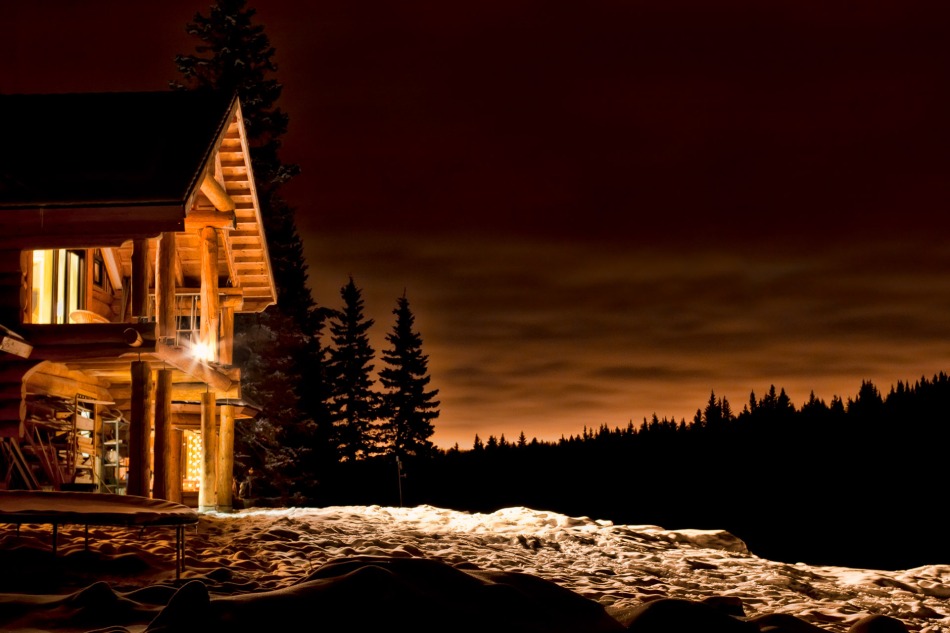 I was up in the North-East of Calgary a couple of days ago during the tail-end of  the cold snap.  At one of my stops, I realized I was in the flight path of planes landing at the Calgary International Airport.  I found an interesting set of lines to frame a plane and then waited in the frigid air for 10 minutes for another plane to pass overhead.  I like the result of this simple composition. 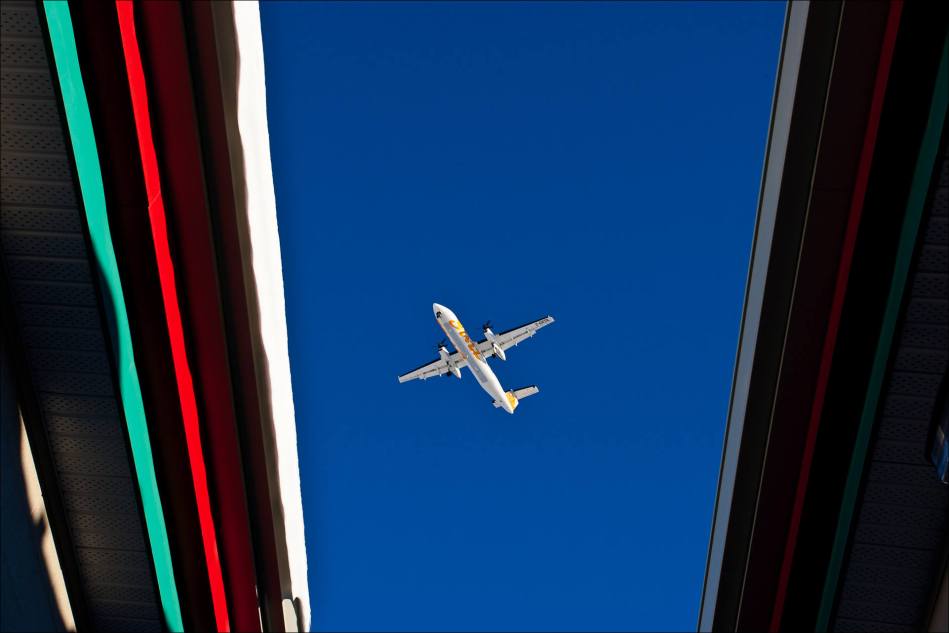 Here is the alley sans plane.

The McDougall United Church is just east of Morley, Alberta.  It sits on a bluff above the Bow River about midway between Canmore and Calgary.

The church was built in 1875 by Reverend George McDougall who was a missionary bringing Christianity to the people of the Bow River valley. 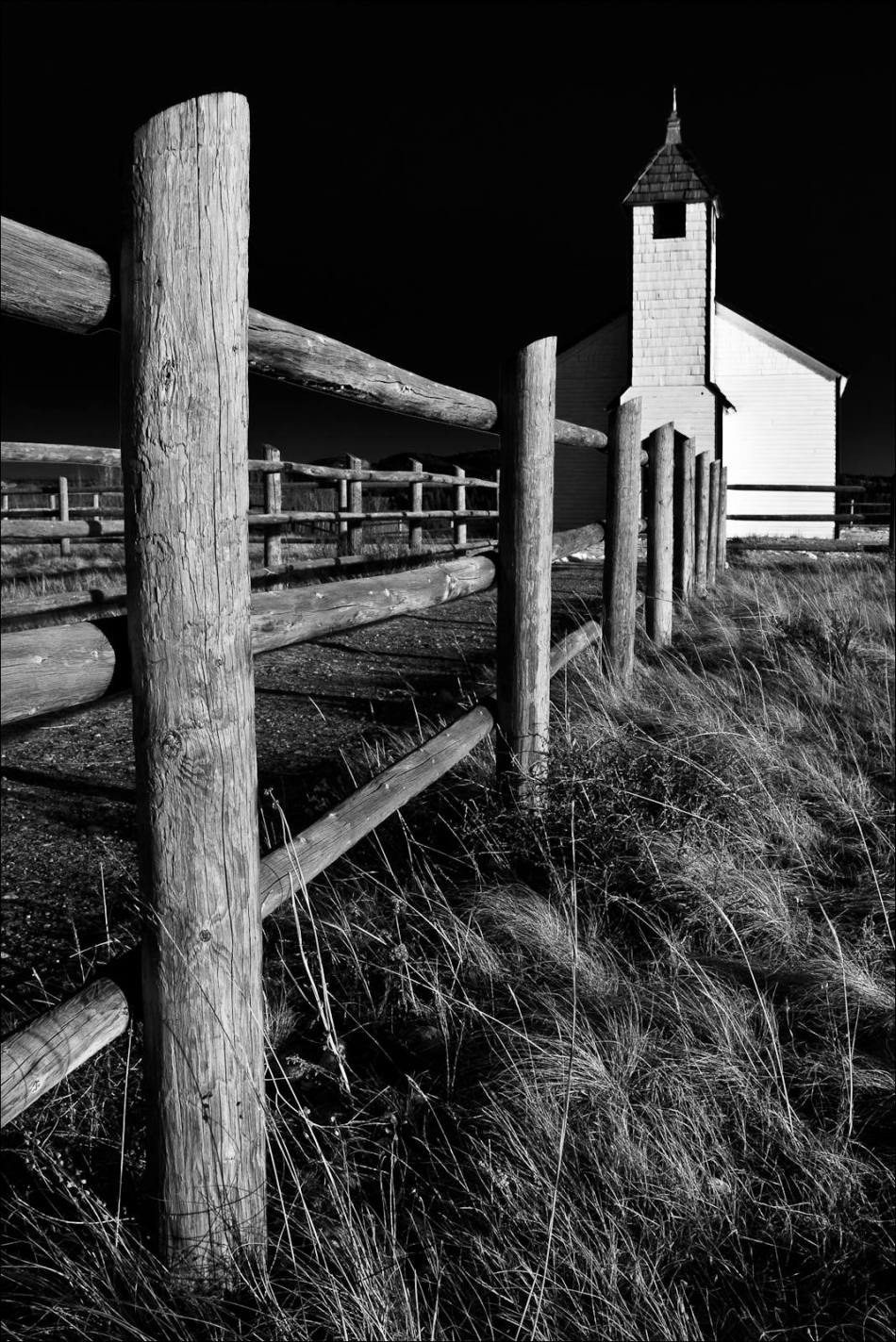 This church draws the eye if you drive the Bow Valley Trail (Highway 1A) between Cochrane and Canmore.  It has been restored and the fence is far from original but it is a beautiful spot.  The building stands out against the rolling prairie and has a lonely yet resolute feel.

I have shot at this location many times and when I was last there, in early evening, I shot this image with a black and white print in mind which would allow the separate elements to each stand out.  I used an approach that Ansel Adams pioneered of exposing the blue sky as a deep black.  The result is a graphic depiction of the building within the detailed prairie grass and fence posts.

We have been out at Jaffray to usher the new year in.  Our friends, Ken and Rhona Beaumont, have a beautiful cabin on a hill overlooking a picturesque section of the East Kootenays which they continue to be very generous in welcoming us to stay with them.  Here is a photo taken this evening of the cabin as the clouds lowered at the front of an approaching storm.

The Beaumont Cabin in the woods outside of Jaffray, BC

We rang in 2010 with our children, my mother and father and my Uncle Bill and Auntie Ann.  It was a wonderful way to end the year and start the new one.

I am excited about this year coming up and wish you the same enthusiasm throughout the whole year.