There were two beavers working at Wild Rose yesterday.  My daughter was thrilled to see them swimming around.  She had never seen one before so two was double perfect in her words.  This one was working hard ferrying tree branches back to their lodge.

Under heavy rain with a Grizzly 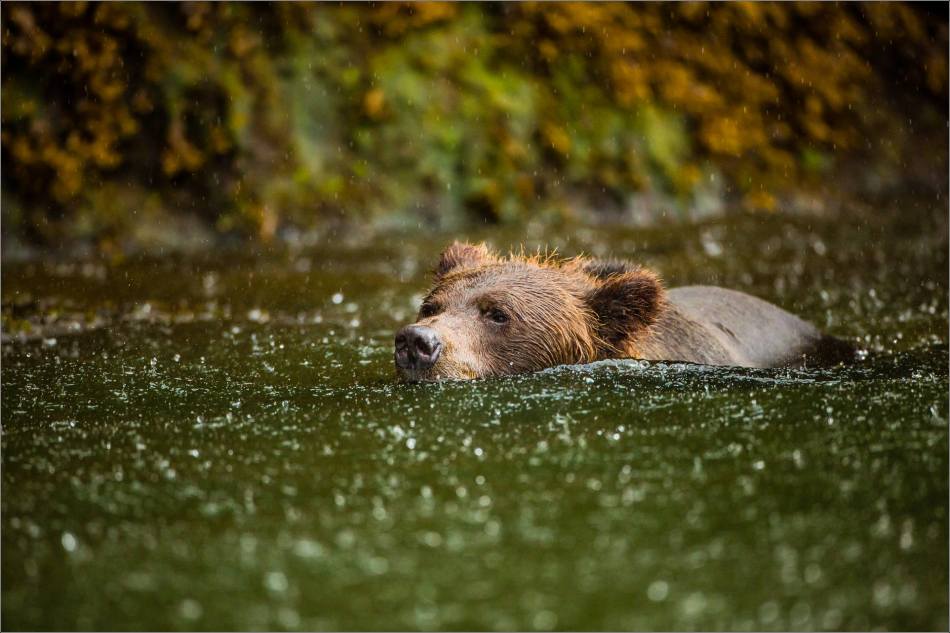 I am traveling back from Prince Rupert right now after my trip into the Khutzeymateen Grizzly Bear Sanctuary.  We were in there for four nights and had an amazing time.  My high hopes were exceeded in every respect and I will have a lot more to share once I’m back home and can work through the images.  This beautiful bear is called Blondie due to her colouring as a cub and the stray tufts that remain behind her ears now that she’s an adult.  She mated for this first time this year so cubs are expected next year.  We were able to watch her on a few separate occasions and she was a favourite amongst us.  She’s a bit of a wild one  but on this day she was cowed by the weather, as were we.  The rain fell hard early, kept going strong all day and stayed late.  We spied her walking along the exposed rock during low tide.  She headed towards the estuary and our guide, Dan, who has been taking people into the Khutzeymateen for the last 35 years, got us into the zodiac boat and we paralleled her travels for over a mile.  This was one of two times where she elected to swim past a steep section of rock.  With the raindrops bouncing off the water, the image gives a feeling of the inlet on that wet day.

I have always loved the crazy colours and patterns displayed by the male Wood duck (Aix sponsa).  They have been somewhat elusive in the areas I am typically out photographing wildlife.  When I was at the George C. Reifel Migratory Bird Sanctuary a couple of weeks ago, I came across a raft of them paddling around a chain of small ponds sheltered by overhanging branches above and reeds behind. 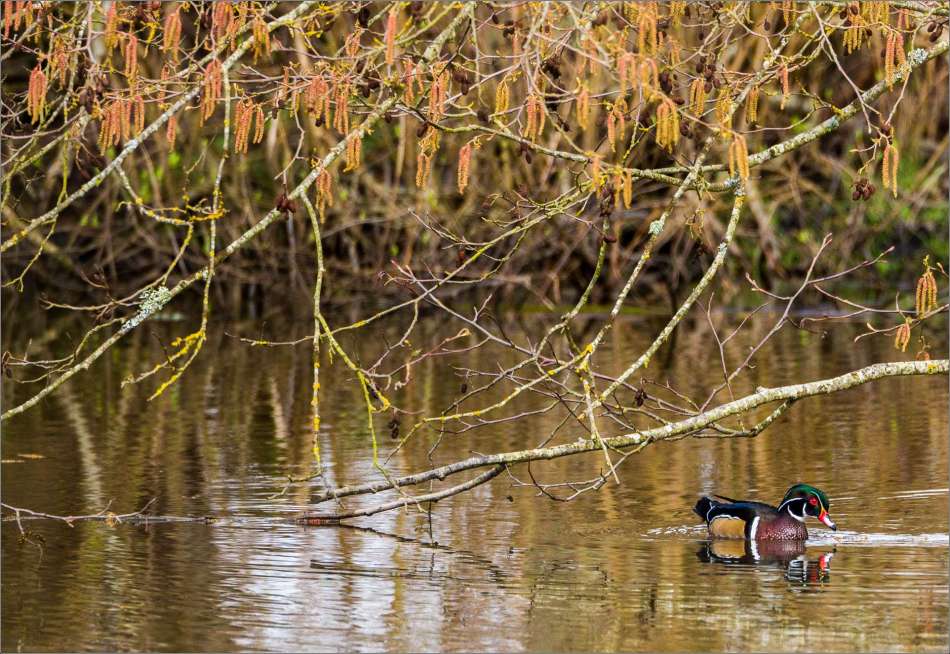 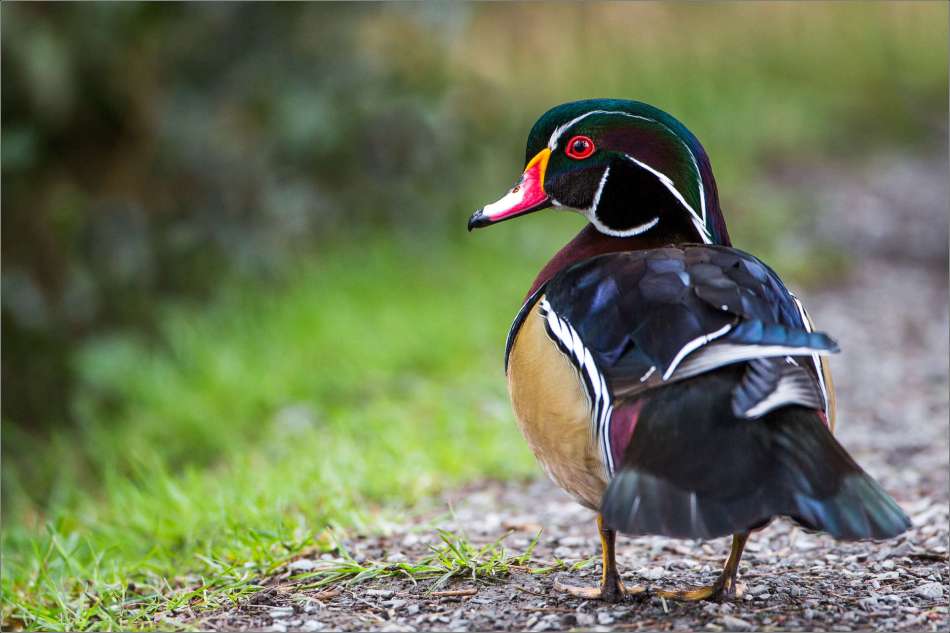 The ripples in the water and the distorted reflections served as a chaotic yet still suitable background to photograph these beautiful birds.  I stopped and enjoyed almost an hour of watching these fellows swim, waddle and chase one another as well as their better halves.  The weather picked a great time to cloud over and the diffused, even light allowed those colours and the textures in the feathers to own the stage in several of the images.

One of the last ones I photographed before moving on caught my eye as it hopped out of the water onto a log jutting out of the water.  After shaking himself off, he cocked his head and fixed me with this one-eyed stare.  The stare, his body posture along with the tail feathers slightly askew suggested a bit of a character and he was a fitting model to finish this duck encounter with.

Swimming with a Honu

I went on a sailing trip up the Na Pali coast yesterday.  The morning was clear and we had a great trip with visits from a couple of separate pods of dolphins and a few humpback whales.  After turning around at the Kalalau Valley, the captain found us a calm cove and we had an hour to snorkel.  Halfway through the swim, I found a Green sea turtle fishing down in the coral. 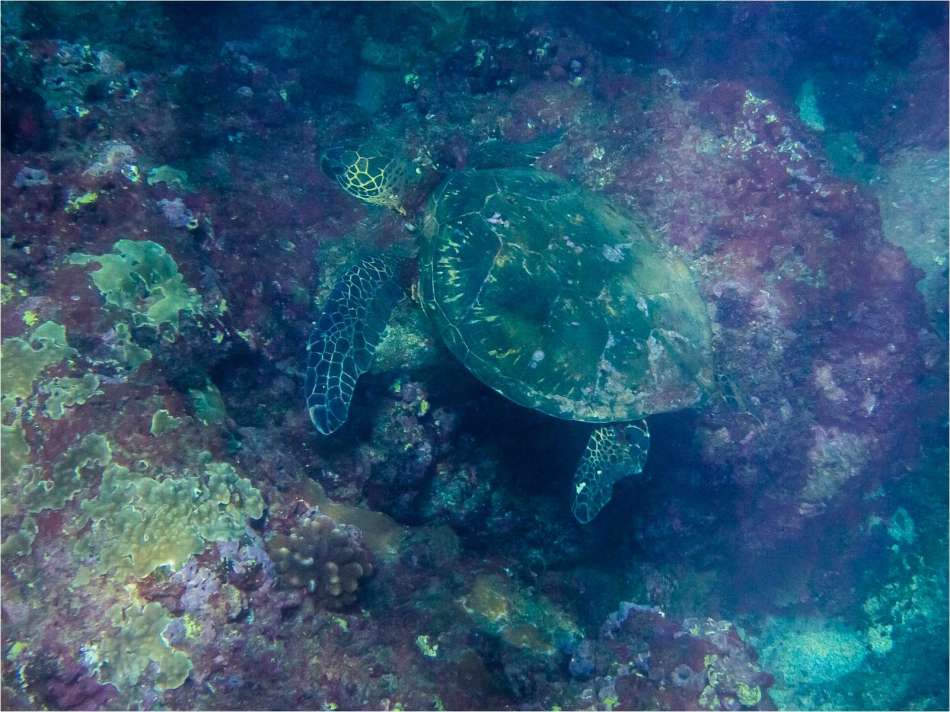 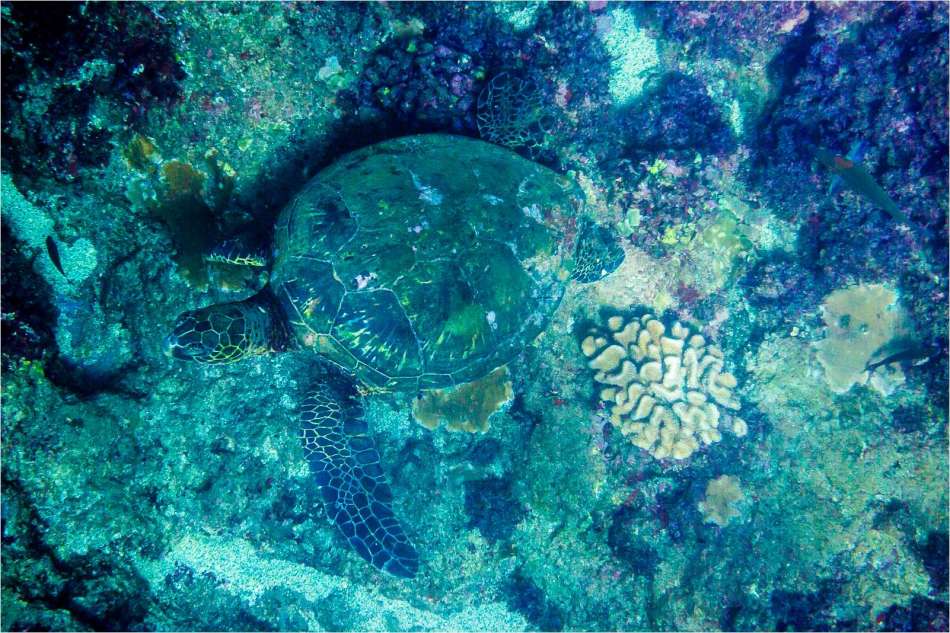 I was about 30′ above it and just floated along watching it swim and explore.  After a few minutes, it surfaced and when it turned to me, I had a second to photograph it swimming.  Soon after with lungs full of fresh air, it descended again and soon disappeared into the blue.

(please click on any picture to open a higher resolution version)

Ilio-holo-i-ka-uaua – that’s what the Hawaiian Monk Seal (Monachus schauinslandi) is called in the Hawaiian language.  Literally, it means dog that runs in rough water.  We were watching a sea turtle that had pulled up on a beach in Po’ipu when a friendly fellow who was chatting with Bobbi, told her about a Monk seal he had just seen on a nearby, although fairly remote, beach a little while earlier.  So, we packed up, drove down an old dirt road, hiked over forested sand dune and about half an hour later, we were watching a seal that had hauled itself well up onto the beach.

The kids had fallen asleep between beaches, so Bobbi and I alternated a couple of visits to the seal.  The ropes had been set up so passersby did not stray (or walk intently) too close to these critically endangered animals.  Most people respected the boundaries.  When the seal slid out of the area that had been cordoned off to provide some space, it rubbed up against one of the poles which was curious – maybe just an opportunity for a scratch or it was checking out the scent left behind by the person who placed it.

A few minutes afterwards, the seal had settled a couple of yards above the water line.  It remained there for almost an hour.  People continued to stay back even without an updated perimeter with only two exceptions – nothing that seemed to impact the seal but a local fellow nearby set the clueless observers straight.  The image below was not one of the too close encounters. 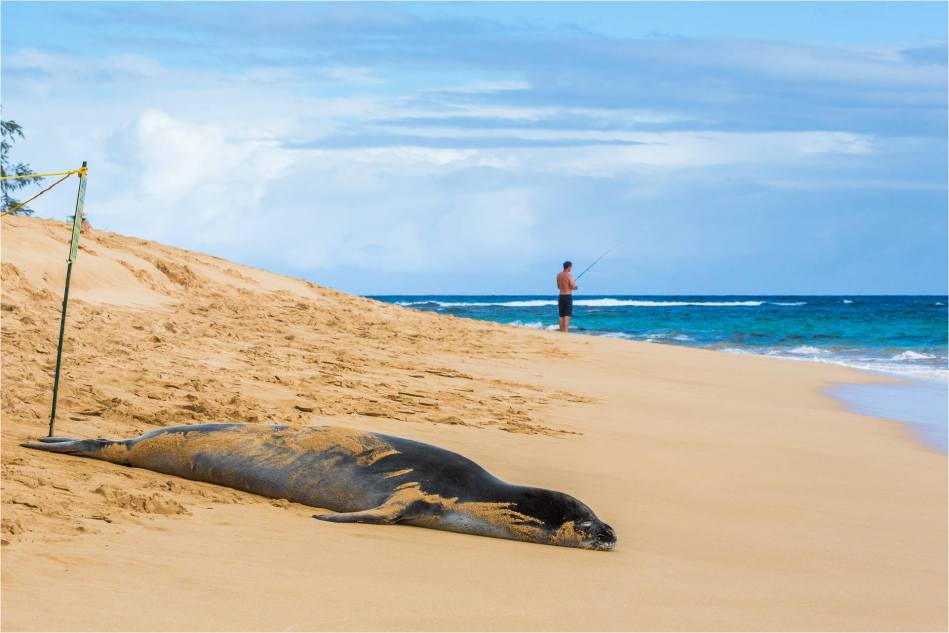 I had the benefit of my long lenses and was able to keep well away from the seal and its path back to the ocean.  It dozed for most of the time we were there and not much interrupted its rest.  When it was back down at the surf, even waves that reached up and covered its face, most only a little, rarely even opened an eye. 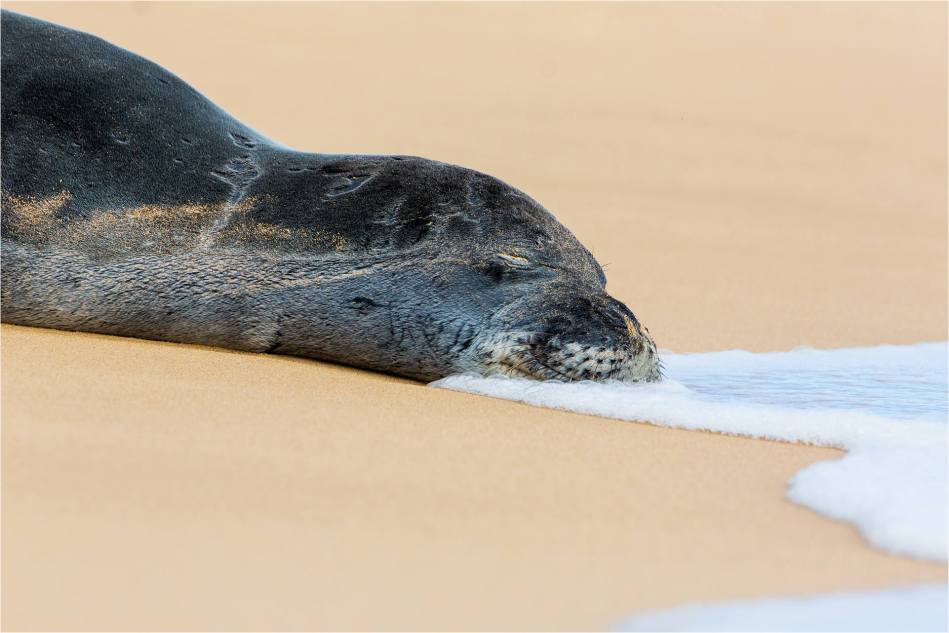 Kian and Kezia woke up after an hour and made the trek down to the beach with us.  It was great to watch the seal together and they were really interested in this beautiful animal, how big it was (7′ long I would guess) and why it was sleeping so much! 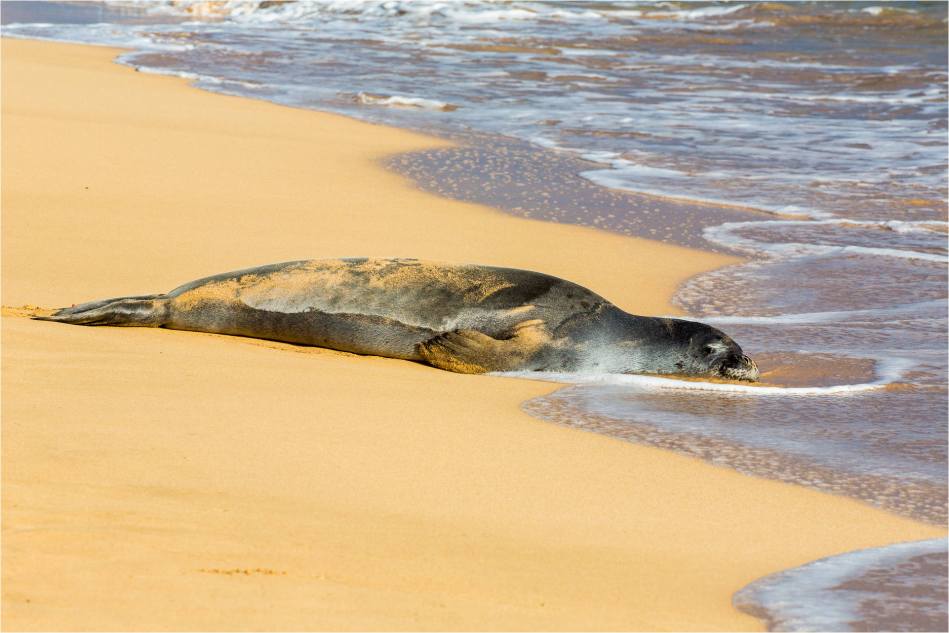 Nearing sunset and following one good wave in the face, the eyes opened and the seal made short work of the rest of the beach between it and the open water.  It undulated forward, sliding across the sand and slipped into the water. 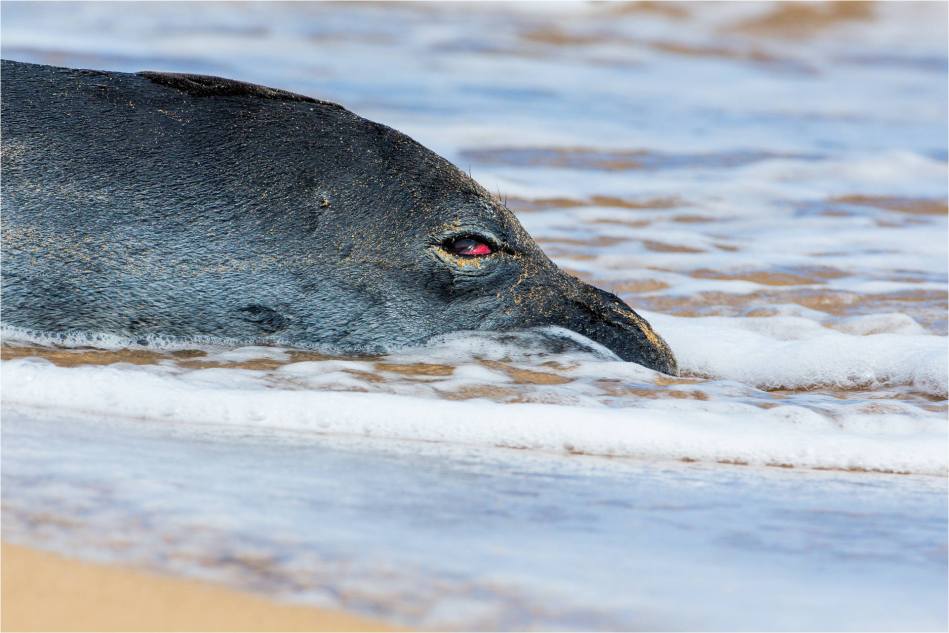 There it was transformed from the ungainly land mammal to a graceful sea creature.  It was great to watch it swim for the first hundred yards or so before it went underwater.

This was the last glimpse I had as it headed out to sea.  We lingered for another hour as there was some family sand castle building required.  One of the best days we’ve had in Hawai’i.

Morning loons through the summer

The small lake in Wild Rose, west of Bragg Creek, has been a great place to enjoy photographing birds this summer.  I have spent a number of mornings along the strip of land that divides the pond.  Several of these mornings have been spent with a few different Common loons.  These are a few of my favourites from these times. 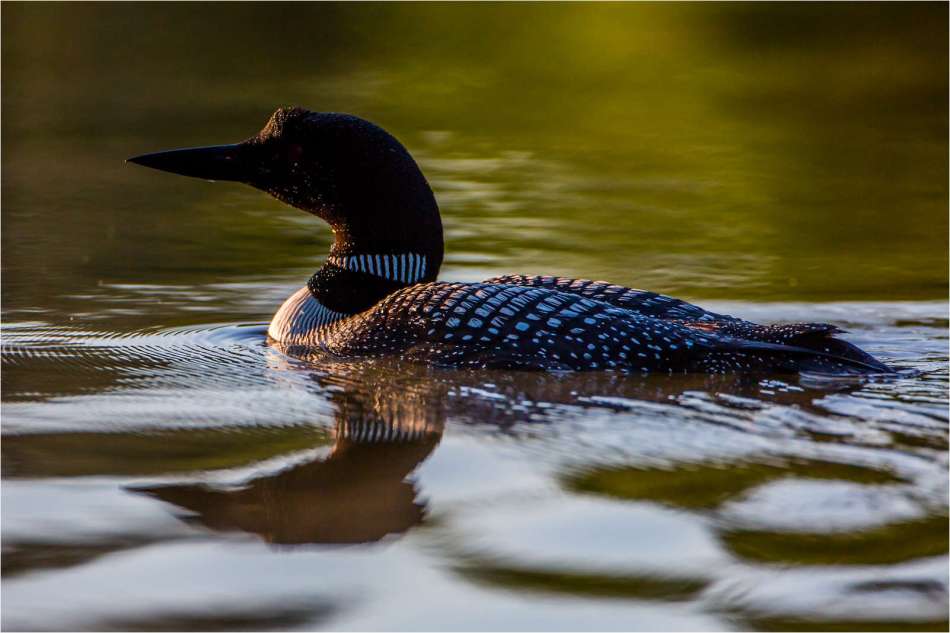 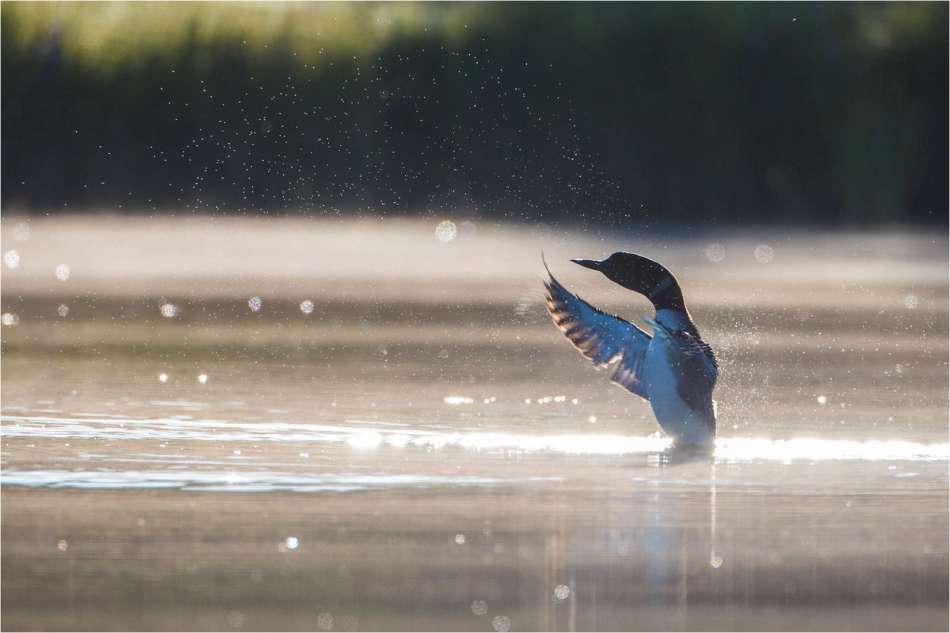 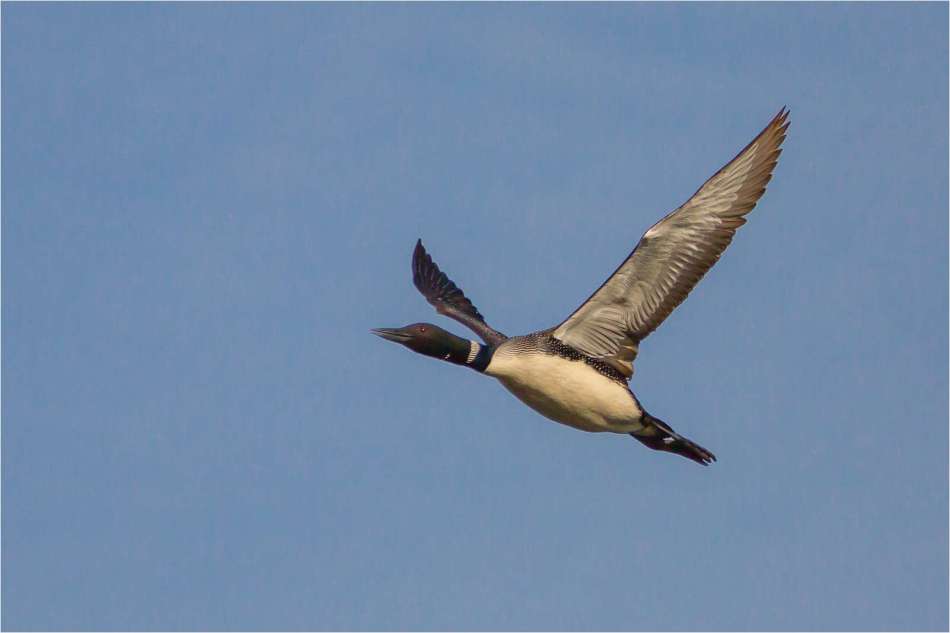 Swimming in the Okanagan 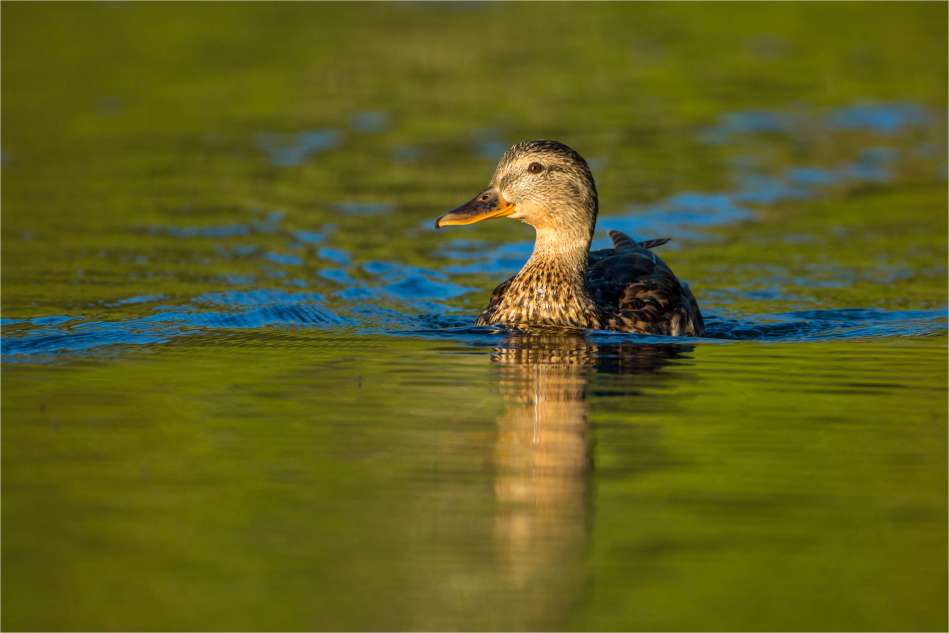 This duck was out for an early swim across the water from Kelowna.  Me and the bird were the only creatures moving around near the shore at that time.  The ospreys, eagles, grebes, loons and a muskrat stirred soon after.  But, for a few minutes, this one duck was sole proprietor of the inlet.