This loon had a small lake to himself a week ago. After swimming around a small island once, he decided to preen. I am used to this being a relatively short session that ends with the stretch out of the water as in the image above. This time was very different and saw the bird splash, skim, dunk and flap for 15 minutes. I’m guilty of thinking that he was having great fun during his bath time. While this is not unusual behavior for loons, it was new to me for the amount of time and the exuberance displayed.

I had a great time was watching and enjoyed looking for dynamic images that I have never had the opportunity to photograph before. The head emerging from the water, wings outstretched perpendicular to the water, surface skimming while beating droplets into a fury around him were among my favorite moments. Here are a few of the images that put a smile on my face when I reviewed them a couple of days after the encounter.

Loon on the lake

A quiet moment watching a lone loon between his dives under the water.

Flashback Friday – a loon shakin’ on the Vermilion Lakes

This past summer I spent a lot of time at the Vermilion Lakes in Banff National Park.  I was drawn there by a pair of common loons who nested on the third lake this year.  This photograph was from May 27th at 5:41 am on a morning when I was alone with the loons and their beautiful, haunting calls to one another.  After diving, they preen their feathers and eventually lean back, unfold their wings and vigorously flap them to shed water.  This process always fascinates me and I love the way the still images look.   It starts slowly, with the bird shifting their weight and then stretching out the wings while raising their bodies off the water.  The flapping then starts and builds to a crescendo with the loon’s head pointing straight up, wings blurring furiously and water drops spraying off in all directions.  And then it ends with the bird dropping back into the water and carrying on preening, diving or paddling along.  The whole cycle lasting roughly 3-5 seconds.  The image below is that peak in the cycle where it seems the bird itself might fly apart.

Loons on the lake in Banff National Park

I found a pair of common loons on the third Vermilion Lake in the Banff National Park on the weekend.  They were diving and skimming the water surface for food, enjoying the sunshine and paddling close to each other at different points.

The sunlight caught the iridescence in their feathers.  It is beautiful when the red eyes glow and the silky greens shimmer along their necks.

There have been three Common loons that spend each spring on Wild Rose lake in Bragg Creek.  Last weekend, I found them for the first time this year and watched them for swim, dive, call and chase each other around for an hour.  The morning light on the water was beautiful and made a great backdrop for these lovely birds. 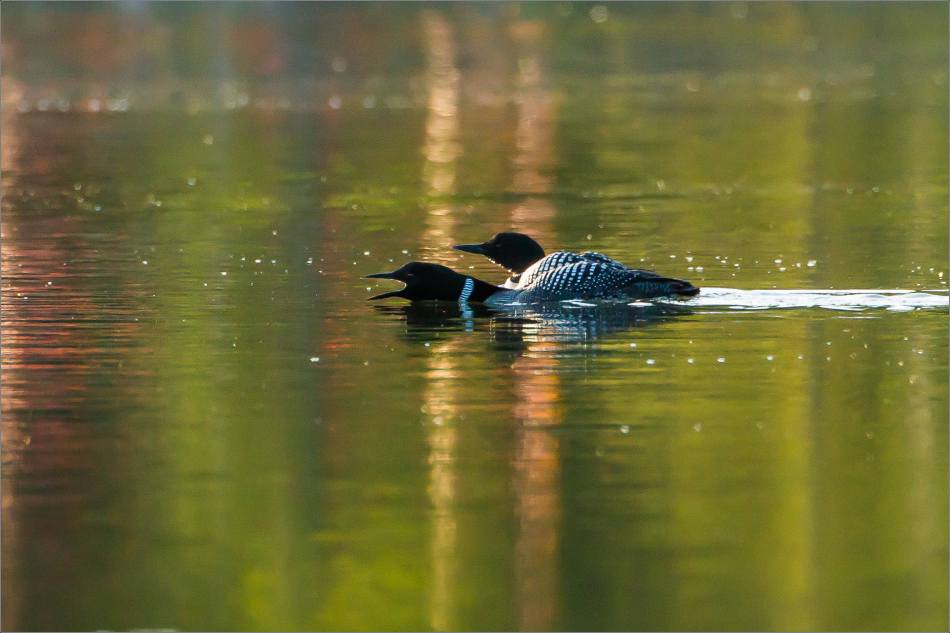 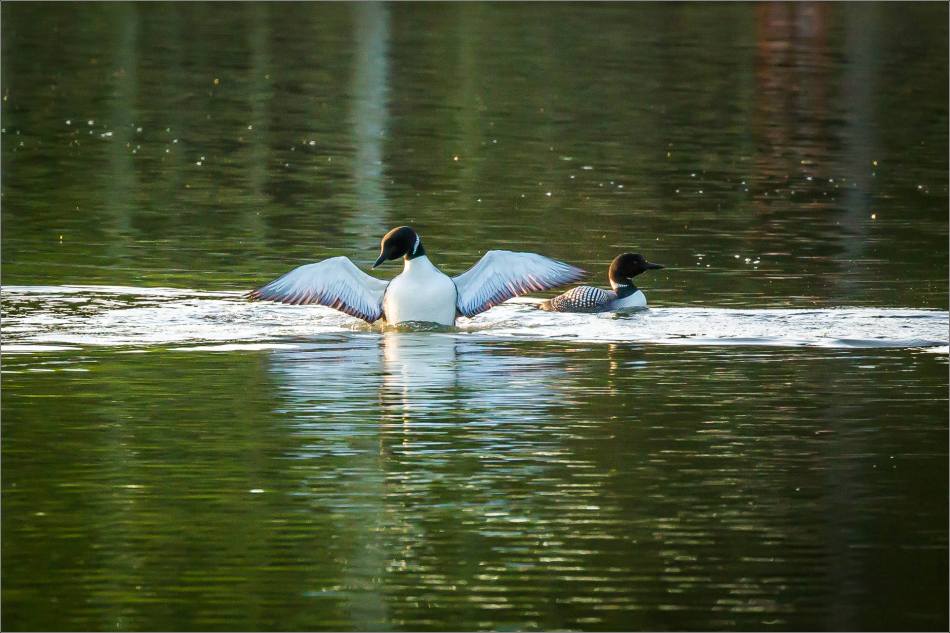 Loons need a long stretch of water to use as a runway to get airborne.  When this trio decided to leave, two flew along the far end of the lake away from me.  The third, fortunately for me, flew towards me and lifted into the air right beside me. 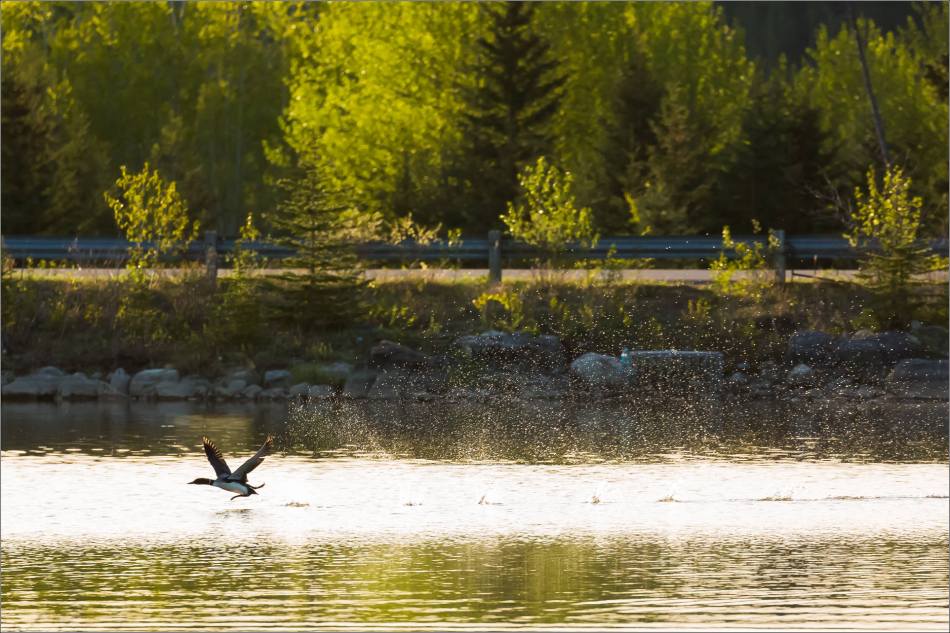 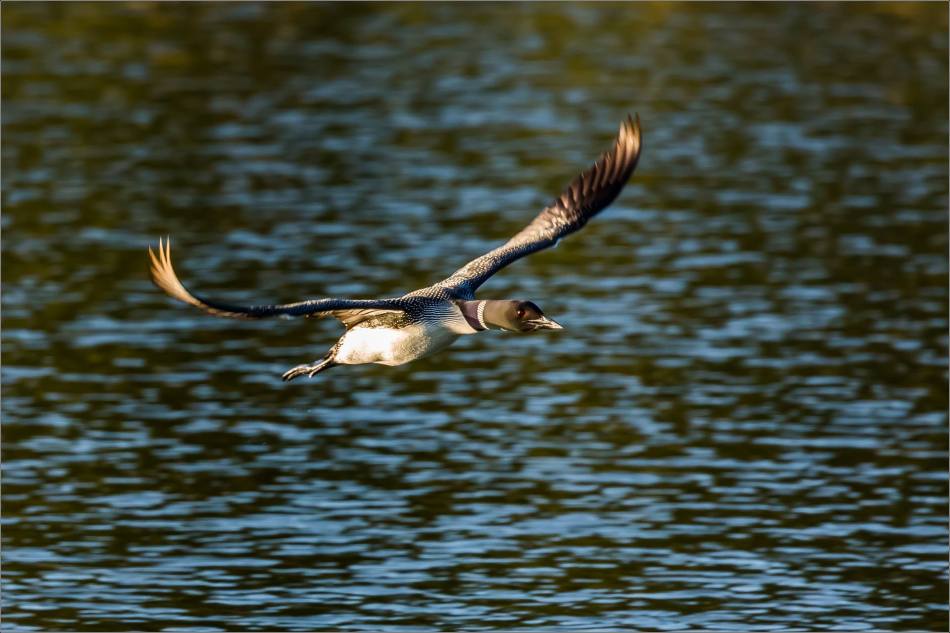 Waiting for the loons…

The loons have been back for a few weeks, their distinctive calls echoing across many of the lakes and ponds around Bragg Creek and the neighbouring Kananaskis Country.  I have had a couple of nice morning and evening encounters with them and am now looking forward to photographing the chicks. 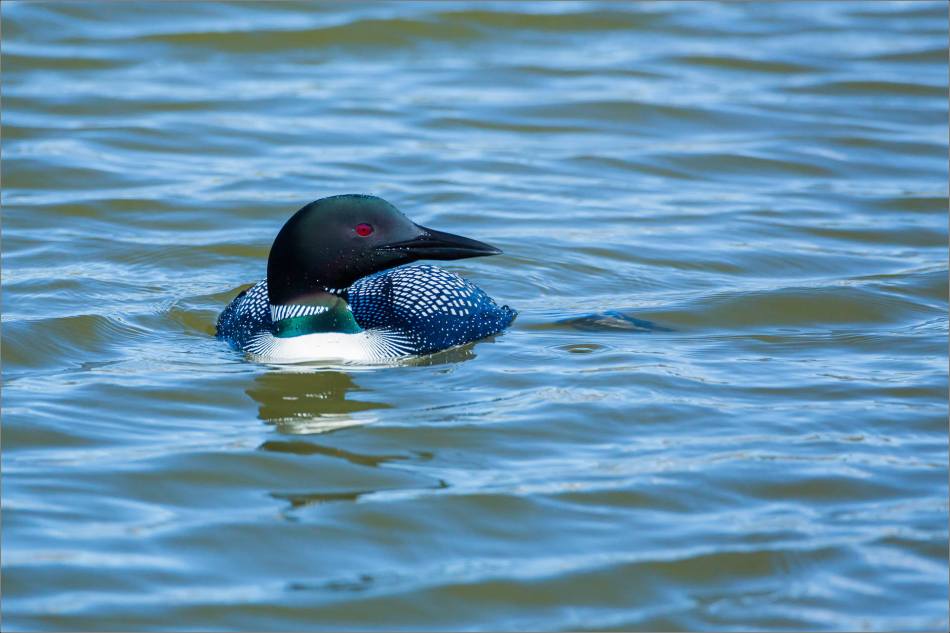 Bobbi and I are off to the Khutzeymateen to catch up with the bears that I met last fall.  They are up from their hibernation and the cubs will be out to play while the mothers stay wary of the boars who are looking to couple up.  It will be an exciting trip and I’m so happy Bobbi is able to join me this time around.  When we get back, I will be out looking for the loons and their babies. 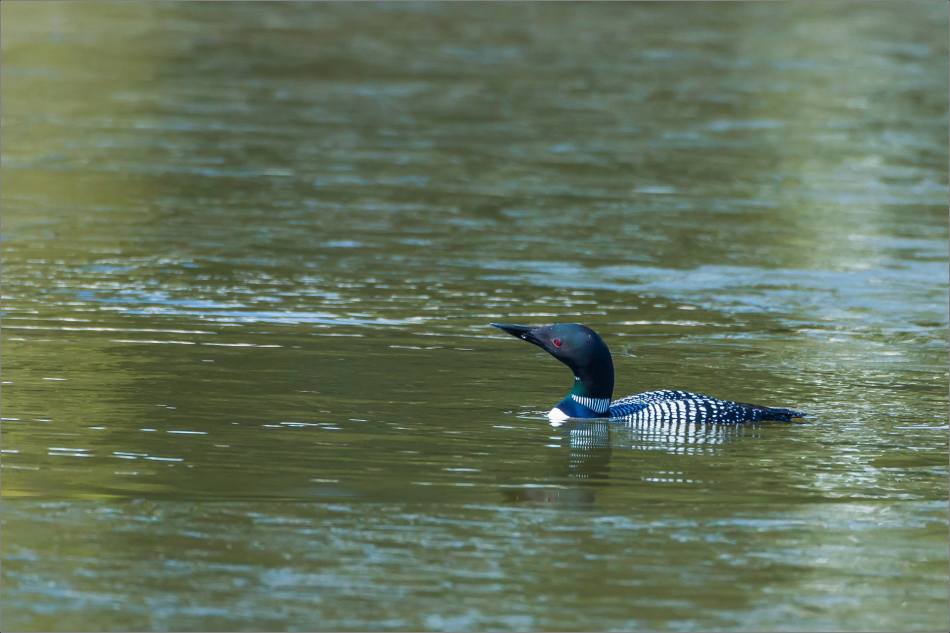 The small lake surrounded by the Wild Rose Estates west of Bragg Creek is a very nice place to watch wildlife.  I often find Great Blue Herons, eagles, geese and osprey plying their various trades in or around the water.  One of my favourite visitors to the pond are Common Loons (Gavia immer).  Occasionally I will see up to four of them swimming and diving.  However, it is usually one couple who comes back in the spring, who then disappear for a couple of months and then return in late summer for a while before migrating on.  They do not nest on this lake so I assume they disappear while they are nesting and raising chicks.  When they return, that is when I usually see three or four loons together.  The fishing at Wild Rose must be worthwhile. 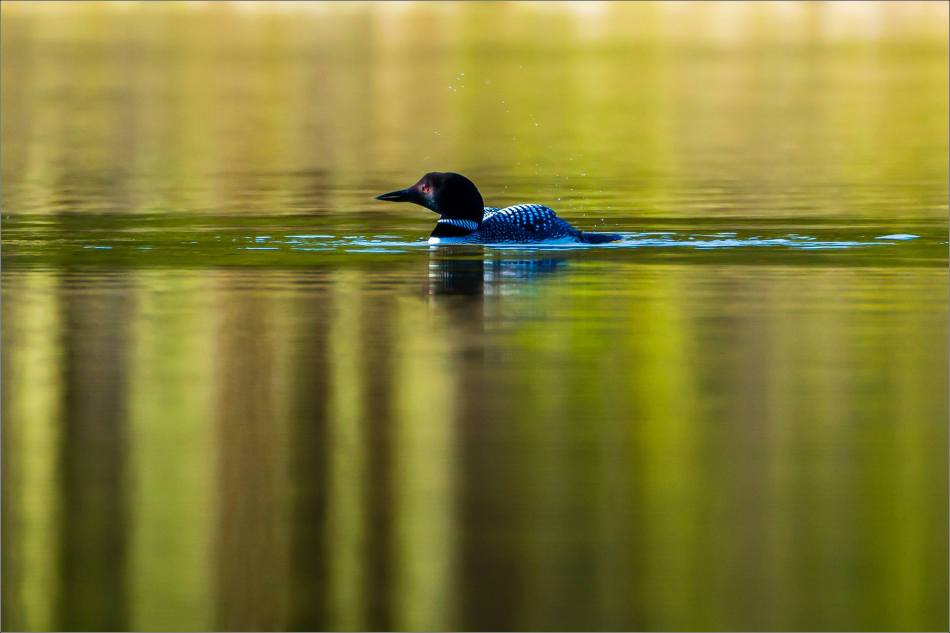 Morning loons through the summer 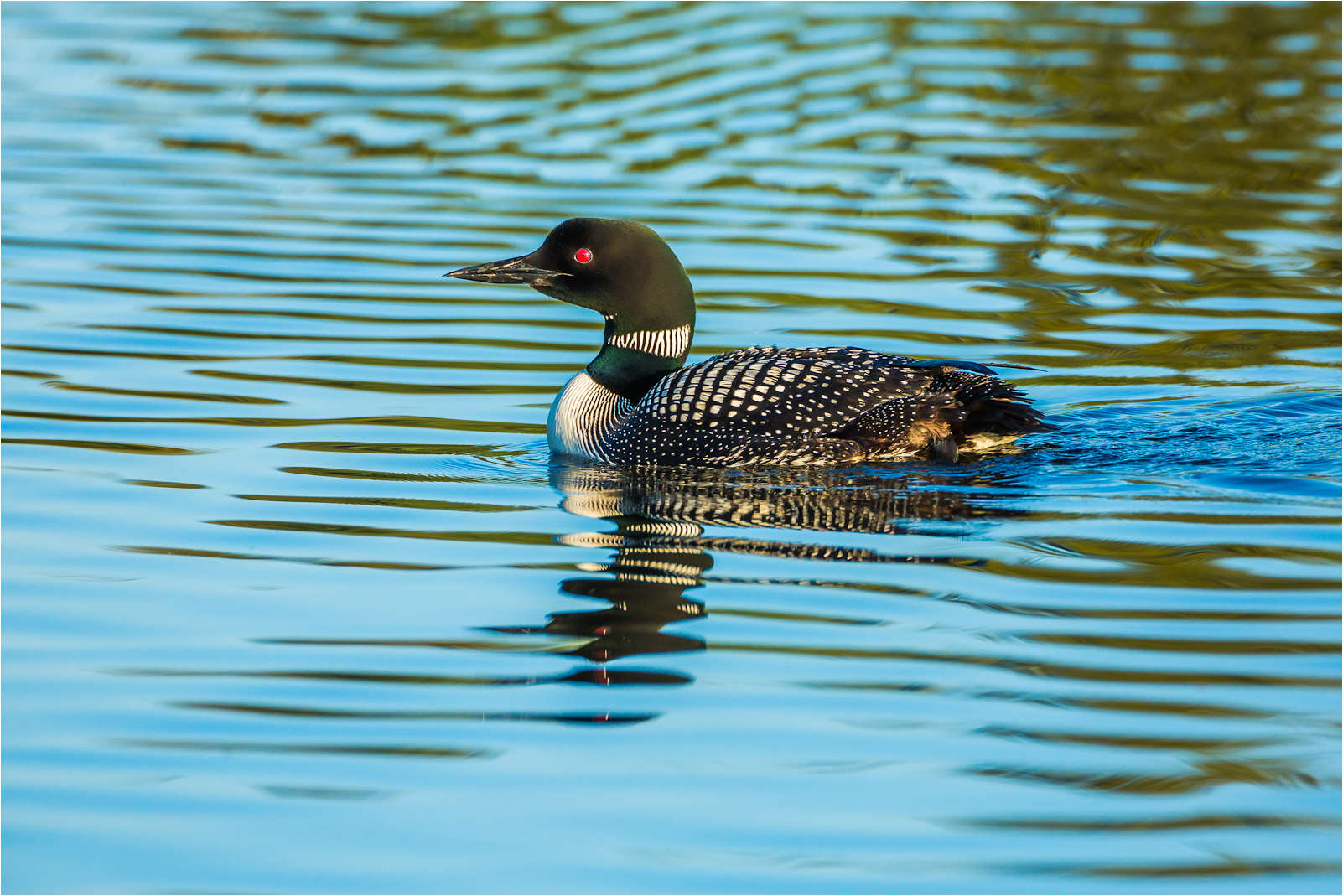 The small lake in Wild Rose, west of Bragg Creek, has been a great place to enjoy photographing birds this summer.  I have spent a number of mornings along the strip of land that divides the pond.  Several of these mornings have been spent with a few different Common loons.  These are a few of my favourites from these times. 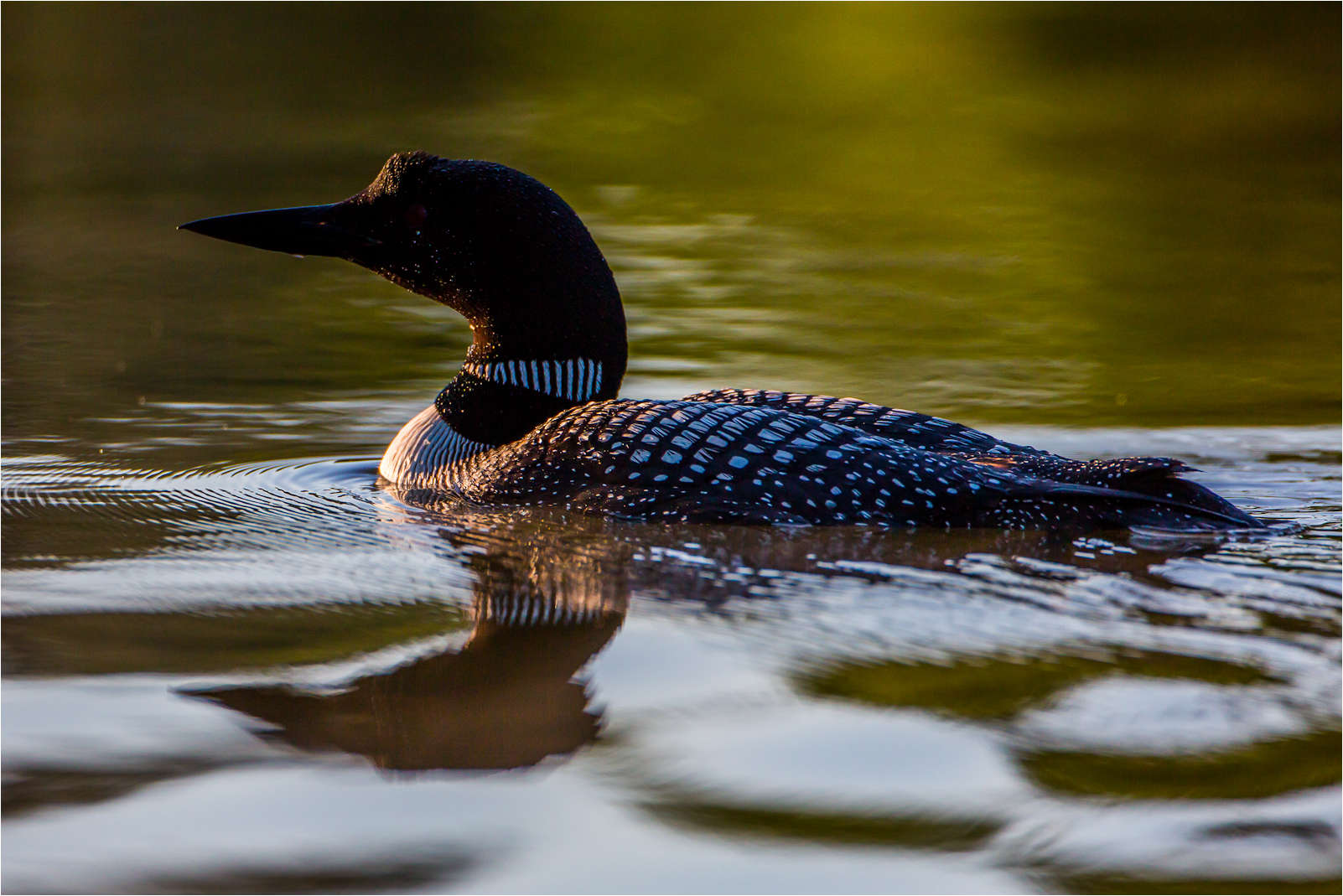 I was photographing on the small lake that Wild Rose surrounds in West Bragg Creek early this morning.  Three loons were diving for fish, splashing around and seemingly enjoying one another’s company.  This one rose up to flap its wings and presented a beautiful profile for me to work with.  As always, click for a higher resolution image if you are interested.