This image of a diver was abstracted by a long exposure (1/6th of a second) where I panned down as they arrowed towards the water. I was photographing our oldest son at a swim meet at the Repsol Sport Centre last month and took a few minutes to explore some creative images as people were practicing from the dive towers.

A night fox in motion

I found this red fox hunting in a field recently. It was well into dusk but she had no trouble maneuvering through the grass. Photographing her in motion was much more of a challenge. In this image, I dragged the shutter to 1/6th of a second and tried to capture that energy. She reminded me of my daughter, her spirit and her intelligence – as every fox that I see does.

I have a lot of fun photographing just about anything in motion.  Thinking about how a picture could look, using different techniques to realize that and then the element of luck throwing in a wildcard or two.  Here are a few car shots from last year which came together pretty well.

Night suits this type of photography as the darkness allows for slower shutter speeds.  I set a longer exposure, often between 1/10th and 1/50th of a second, and then pan with the vehicle as it passes by.  The background blurs and, hopefully, the vehicle remains in sharp focus.

And then, sometimes, you find a car just sitting patiently in an empty parking lot in Montréal under a light rain in the early morning that simply looks amazing.

Calgary at night: traffic in motion under the city’s lights 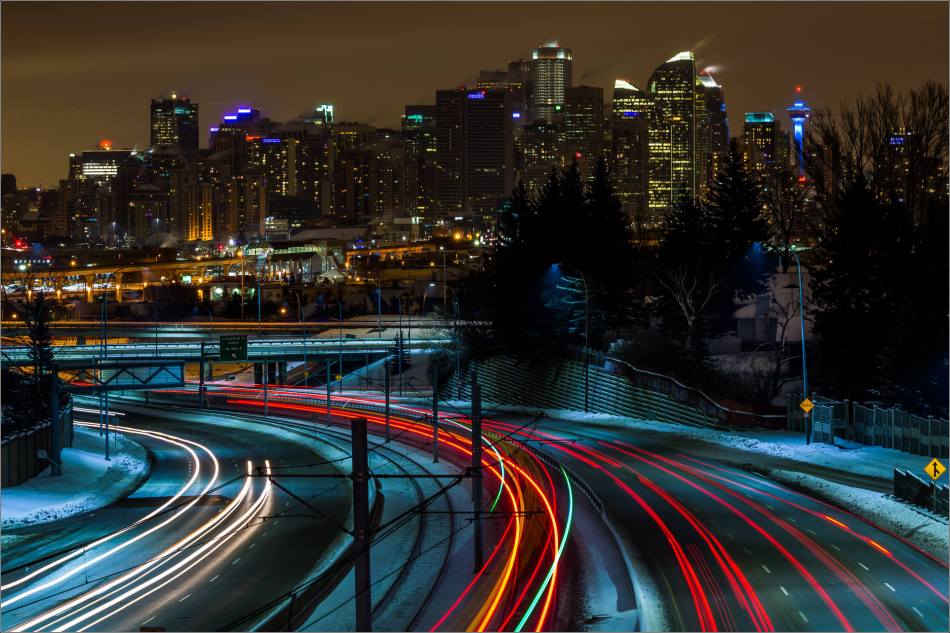 Late night light trails as vehicles move along Bow Trail.  The red tail lights streak towards downtown while the lights on the left climb out of the city centre.  Every few minutes the LRT, Calgary’s public transit commuter trains, slid along the tracks dividing the westbound and eastbound lanes of the roadway. 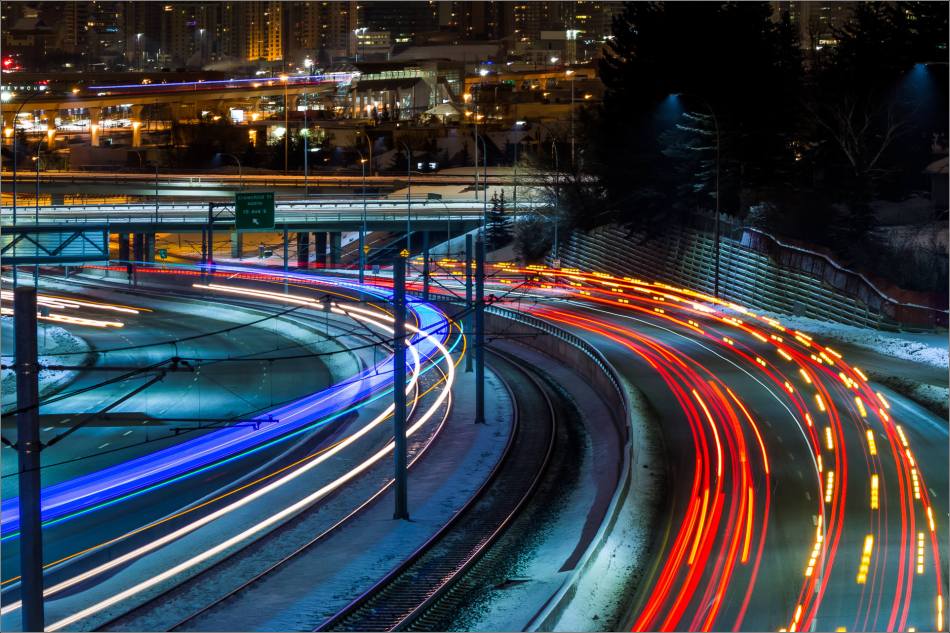 I walked to the Bow Trail Bridge near midnight in early January.  I often pass under this bridge and believed it would afford a good view of both the city’s skyline and the traffic passing under it.  The bridge itself has great curved lines and I shot it for a few minutes before photographing the cityscape. 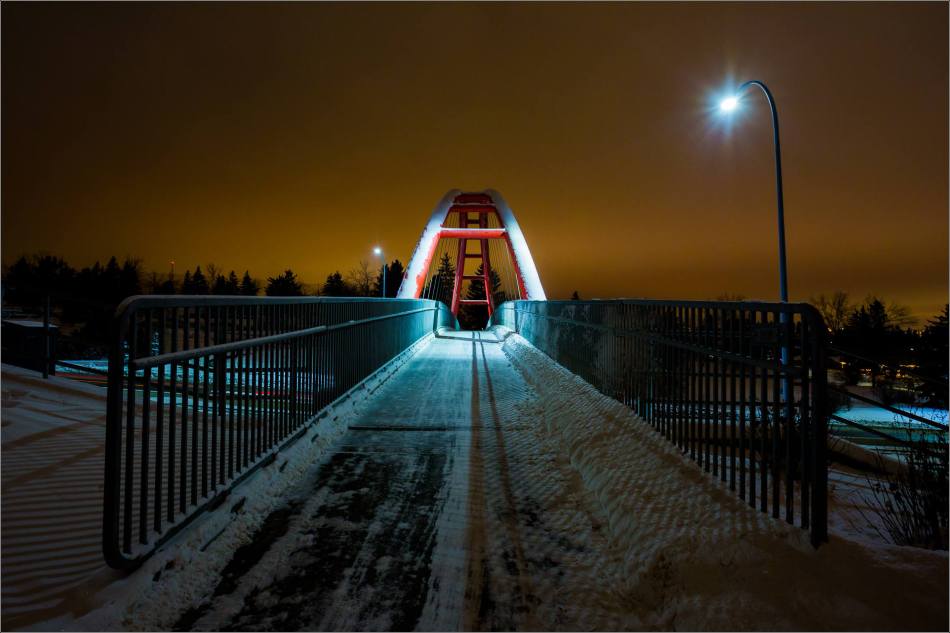 From the bridge deck, the view matched my expectation and it was fun composing for long exposures meshed with the skyline.  I’ll end with a slightly wider view of the scene.  I’m looking forward to a return on a starry night… or maybe during an exceptionally bright Aurora Borealis display. 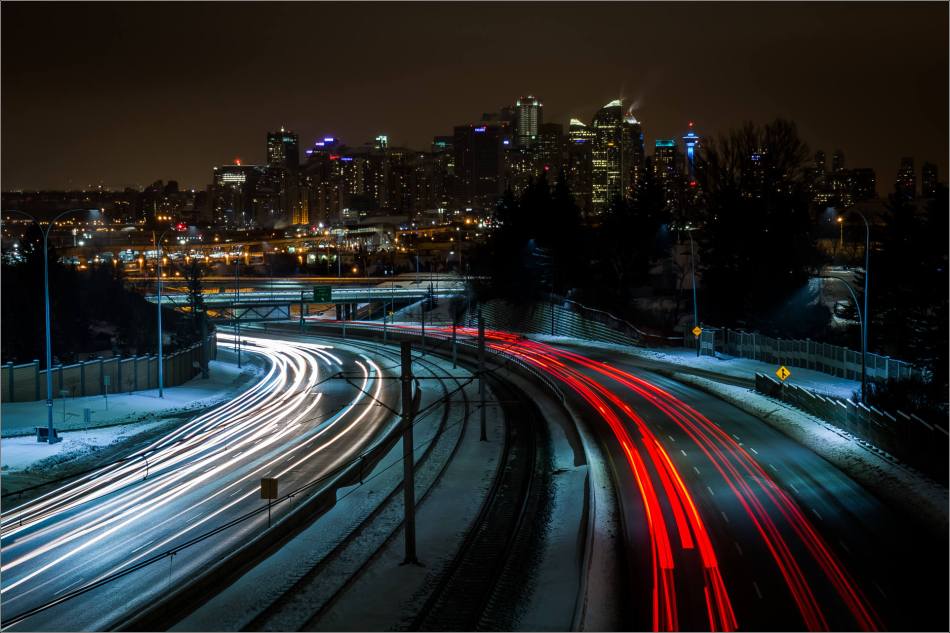 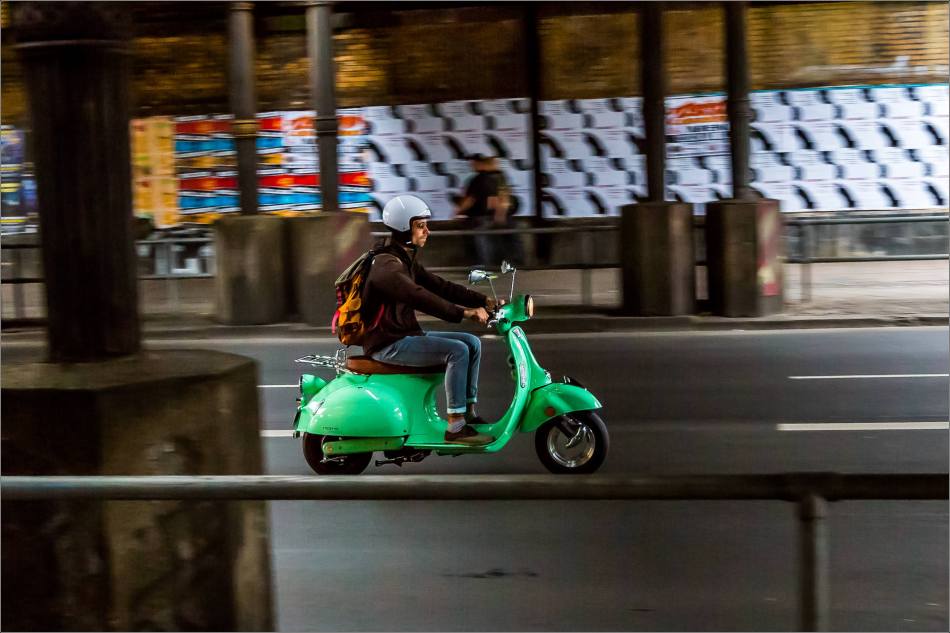 I stopped under a railway overpass to photograph a small piece of the morning commute in Berlin.  It was interesting to see and compare the vehicles on a German roadway with what I’m used to at home in Calgary. 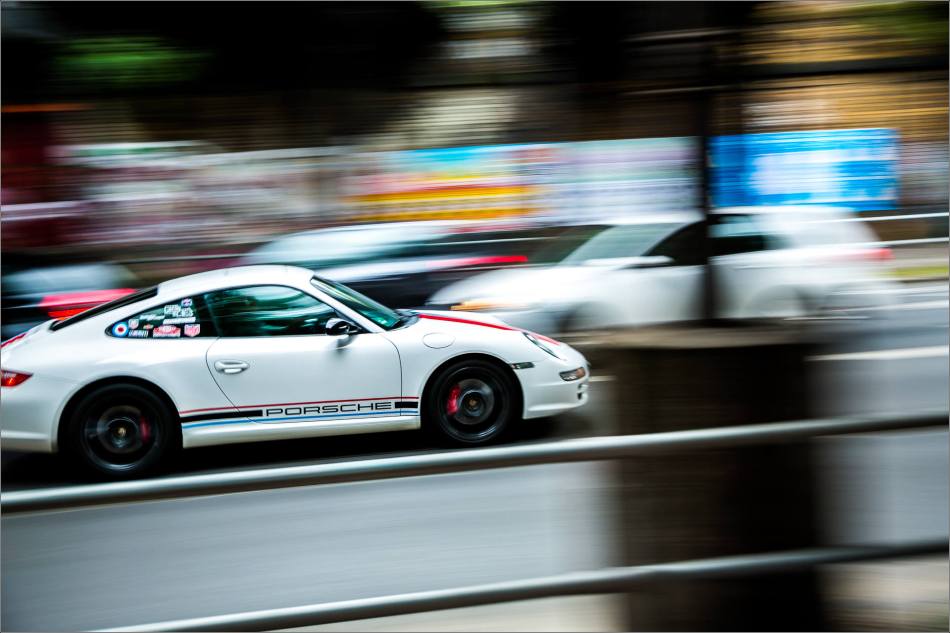 I have a lot of fun photographing things in motion and the half hour I spent on this street just outside of downtown was no exception.  Playing with the shutter speed to isolate subjects as they speed by is a good challenge and can make for strong, dynamic images.  Here then are a few more from that session beside the road. 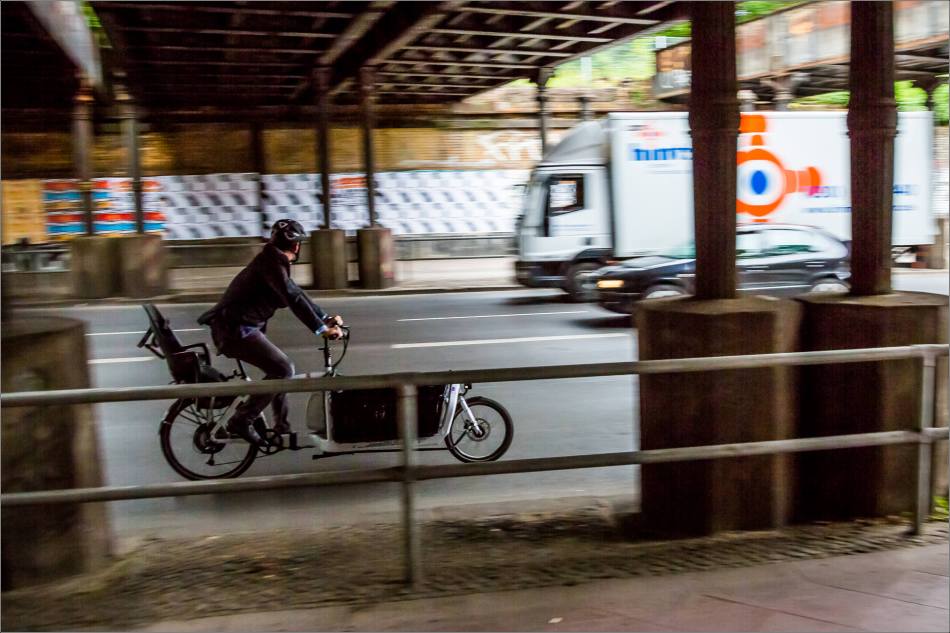 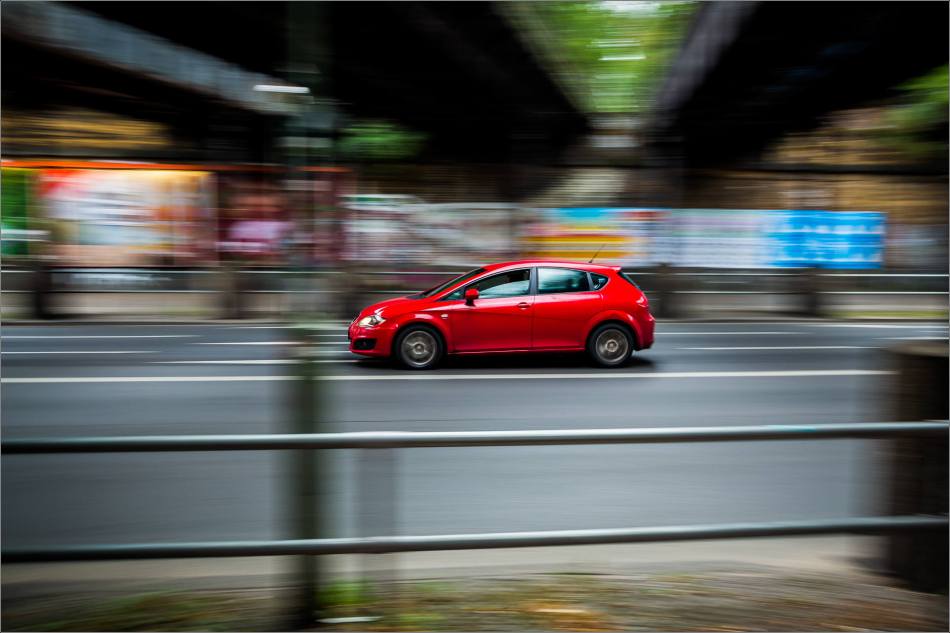 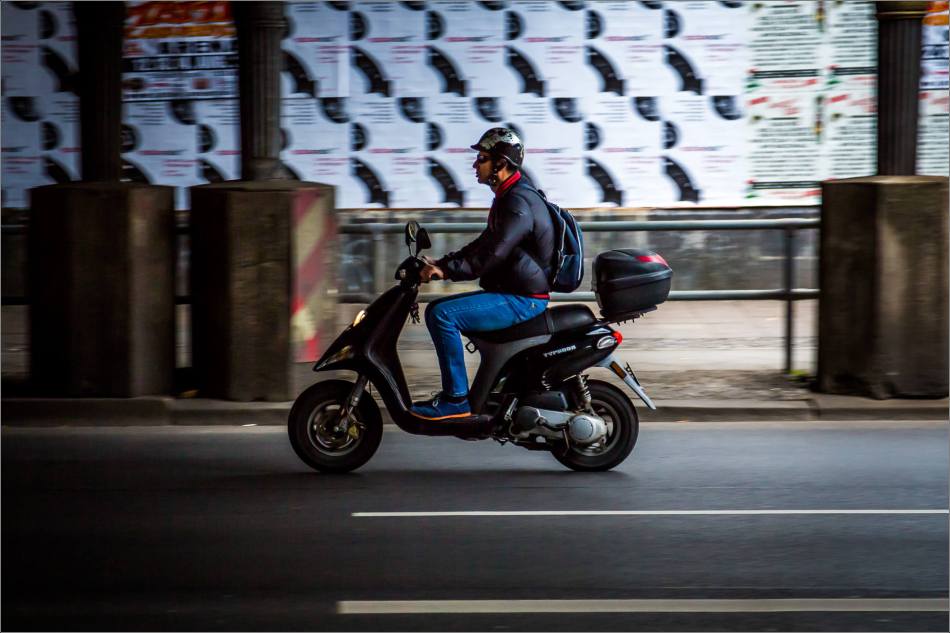 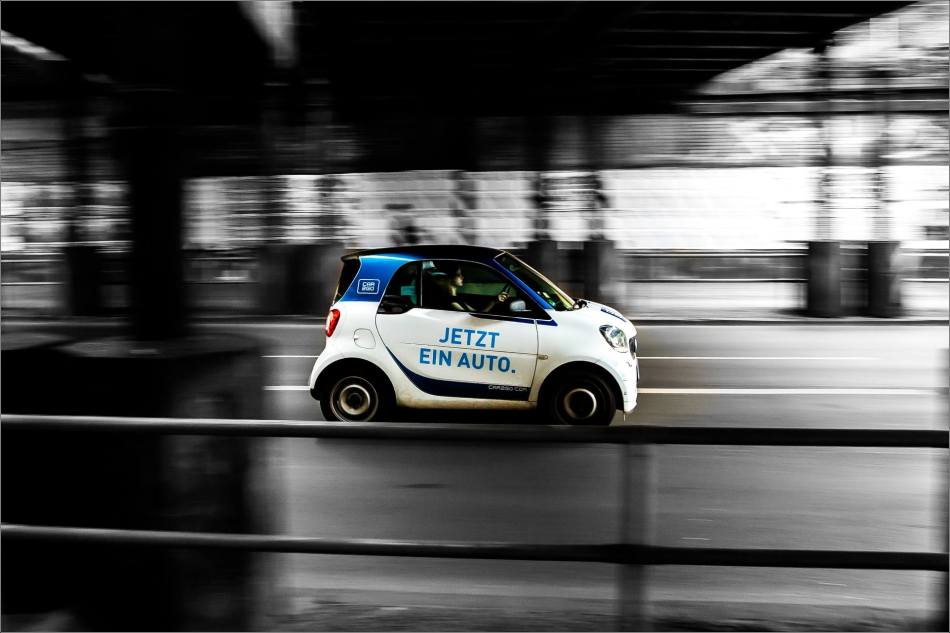 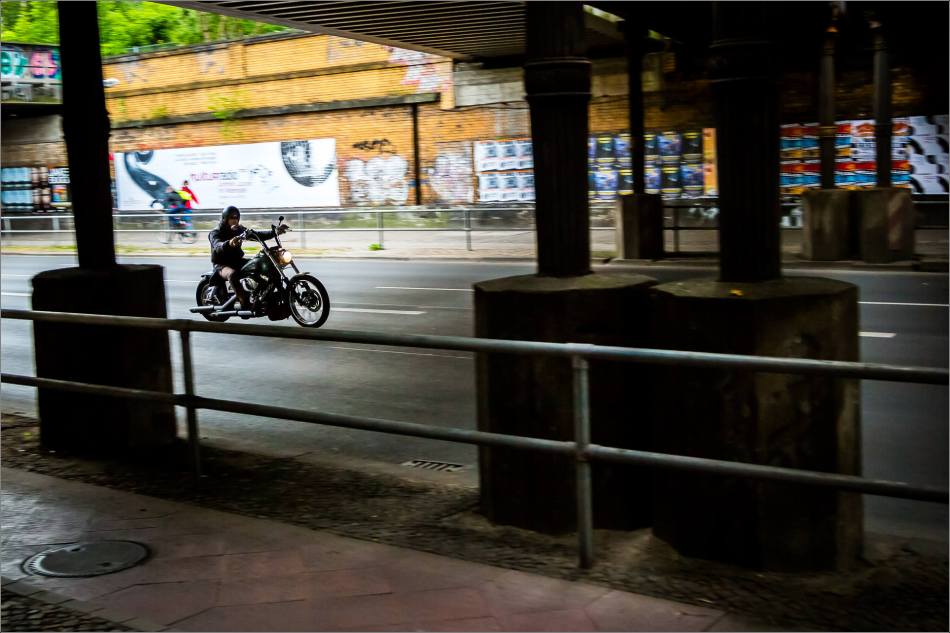 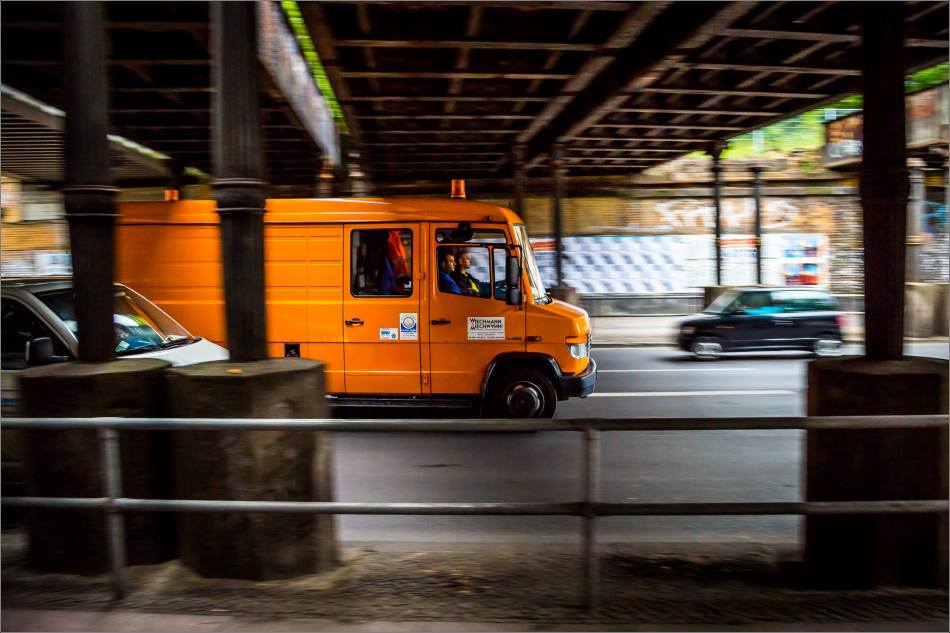 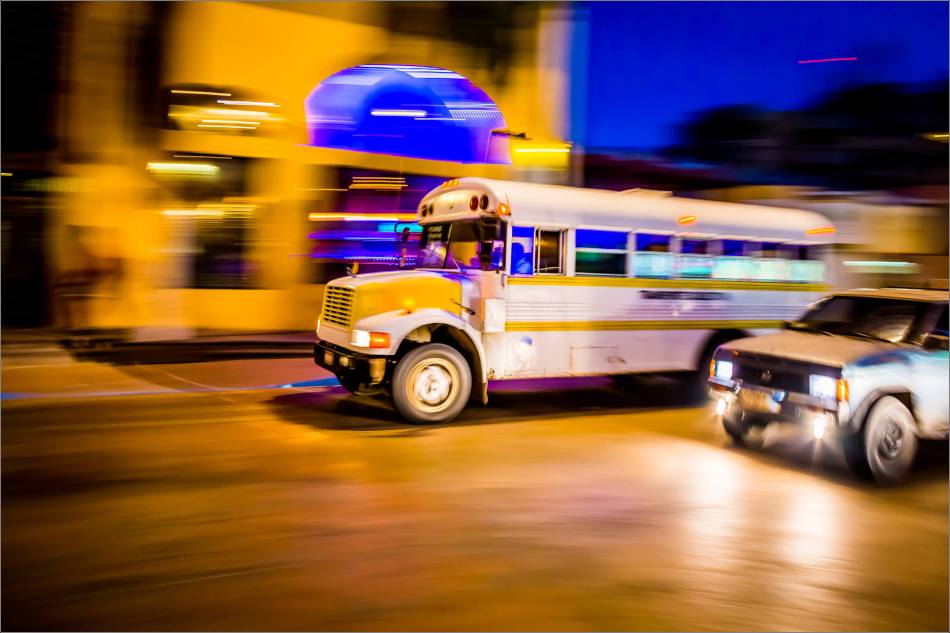 Cars, motorcycles, buses and rickshaws swung by me one evening while I was in the heart of Cabo San Lucas.  With the neon signs hanging above many of the shops and the sky still deep blue, I didn’t want to pass on the opportunity to drag my shutter and play with what images I could create. 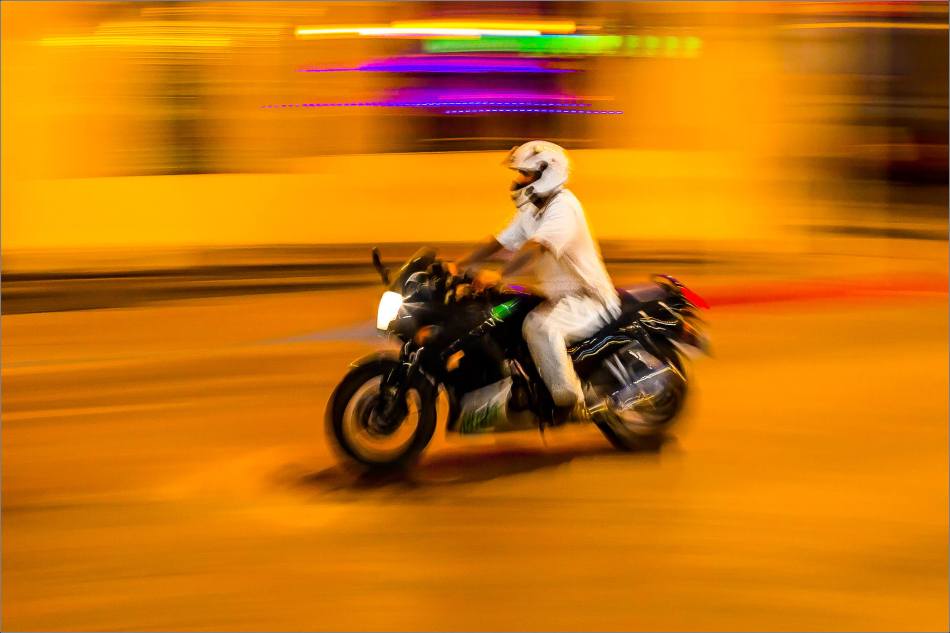 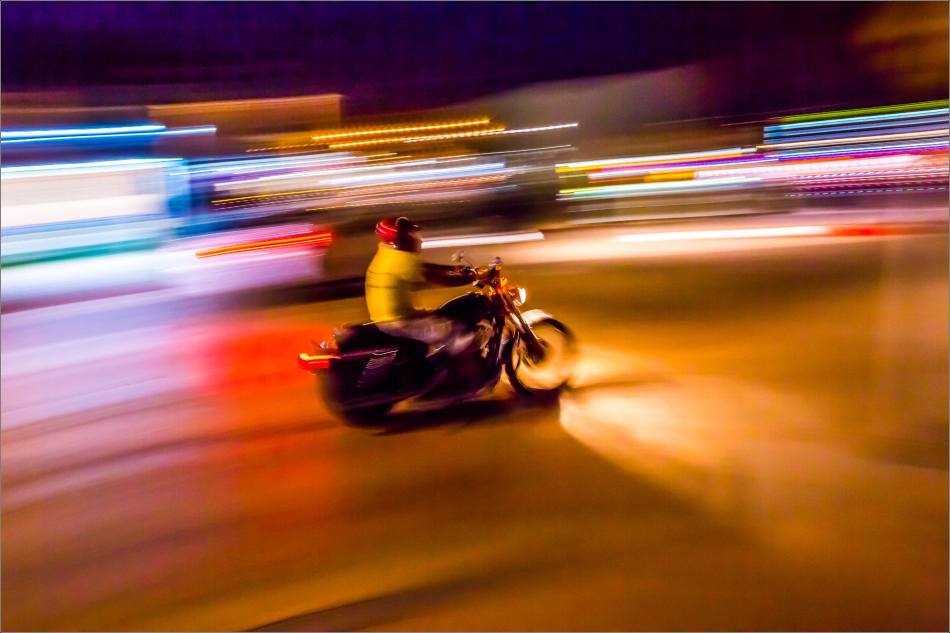 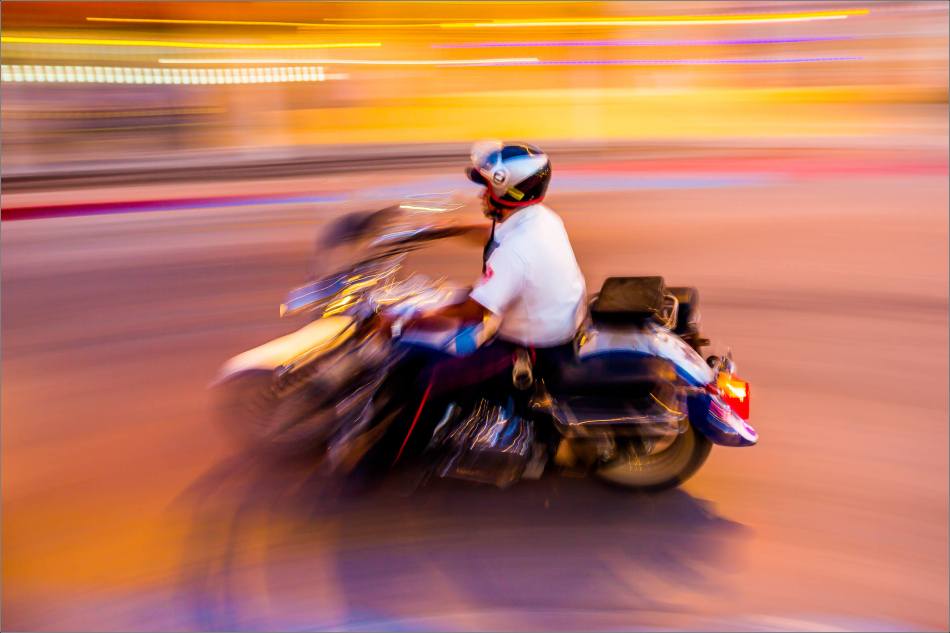 When practicing motion photography, I like to try different techniques.  I switch between keeping the subject sharp by panning in sync with its movement and panning out of sync so that only a small part is sharp or the whole thing has a large or small amount of blur that pushes the image into an abstract shot. 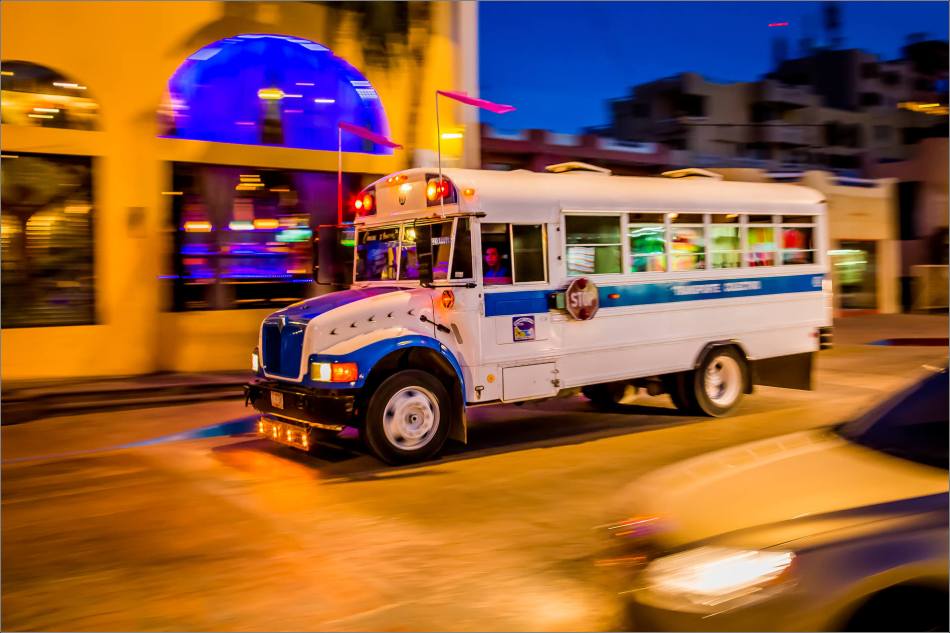 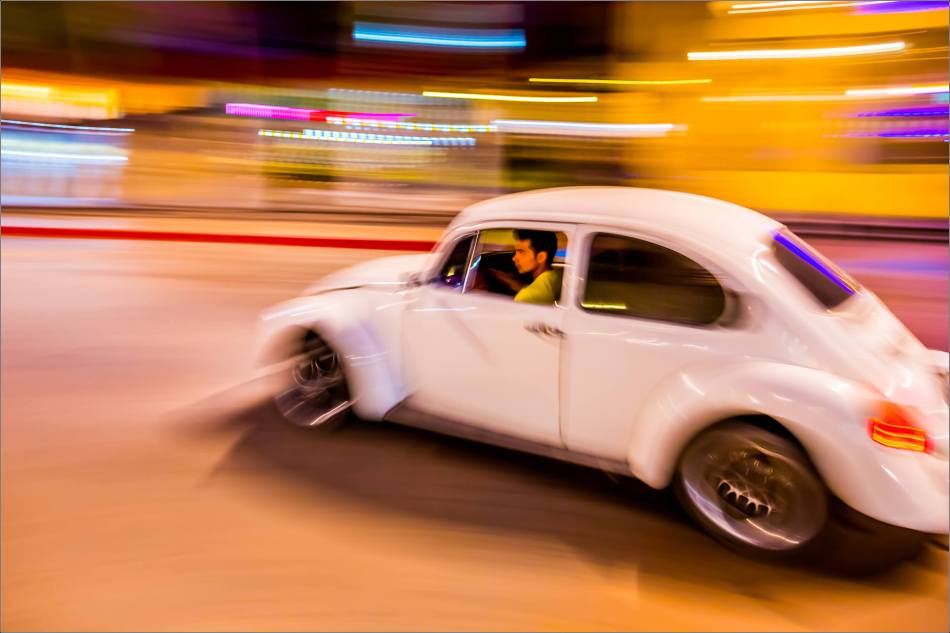 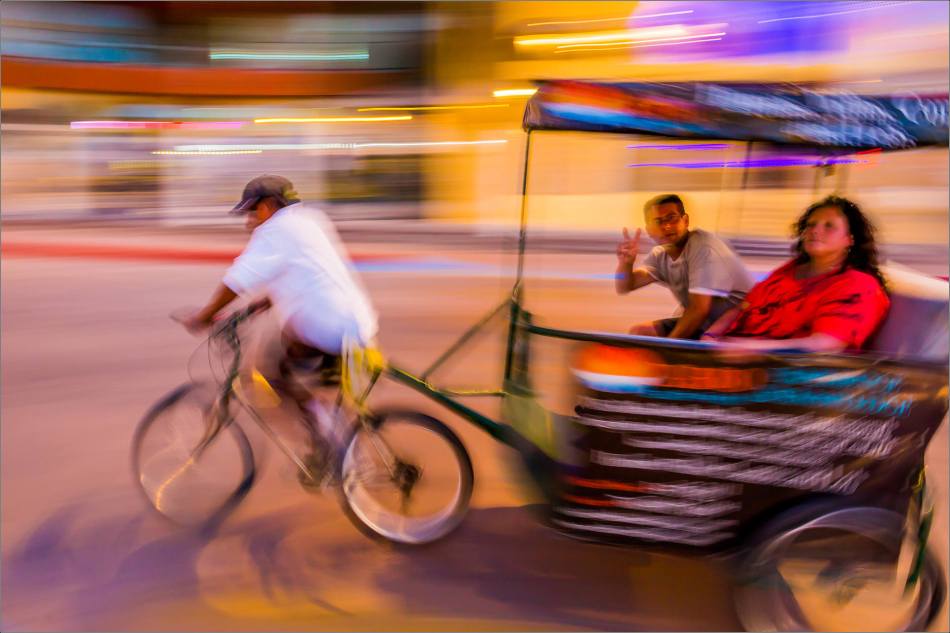 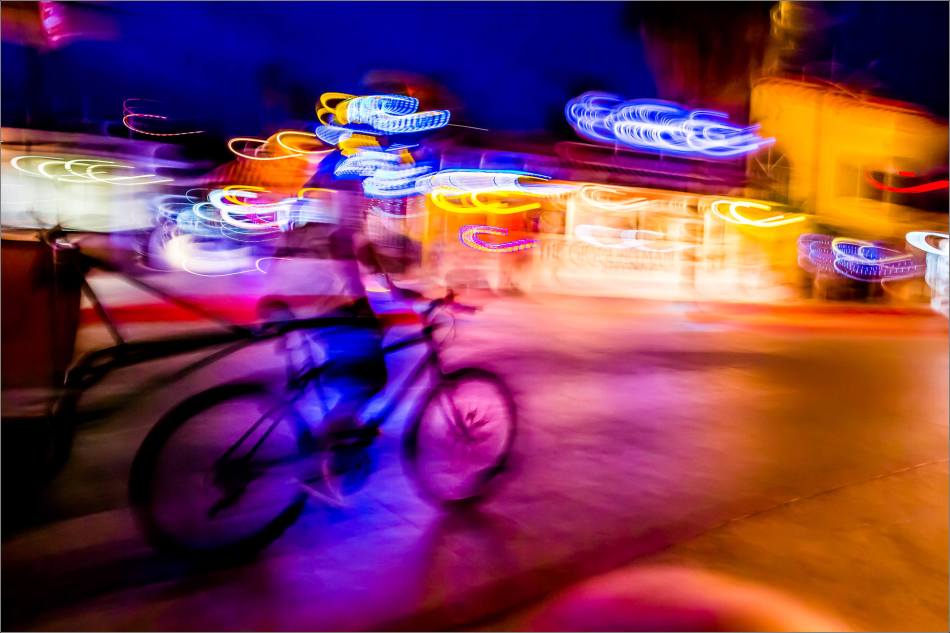 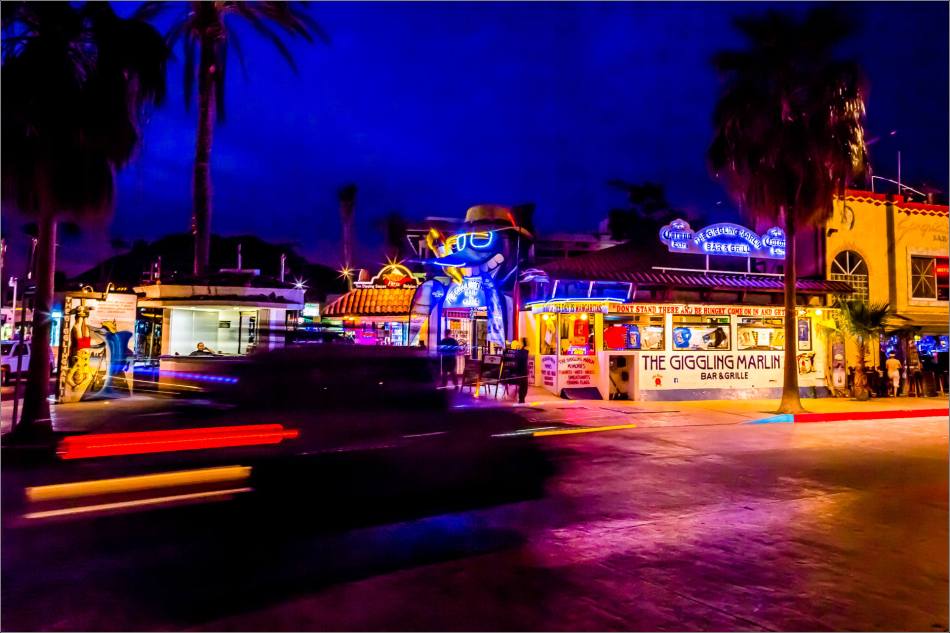 For the better part of an hour, the traffic kept me happily occupied while I waited for my bus to arrive. 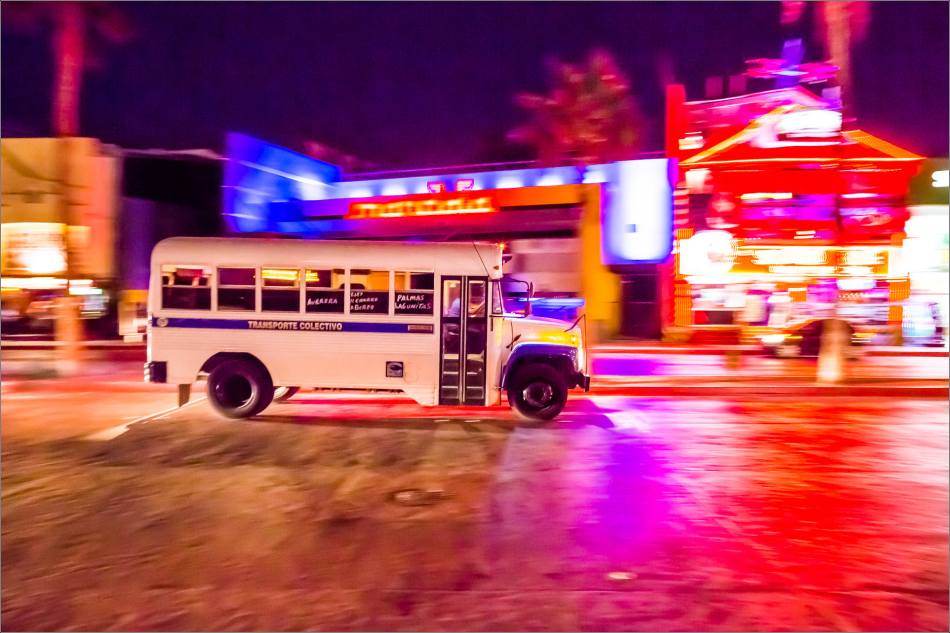 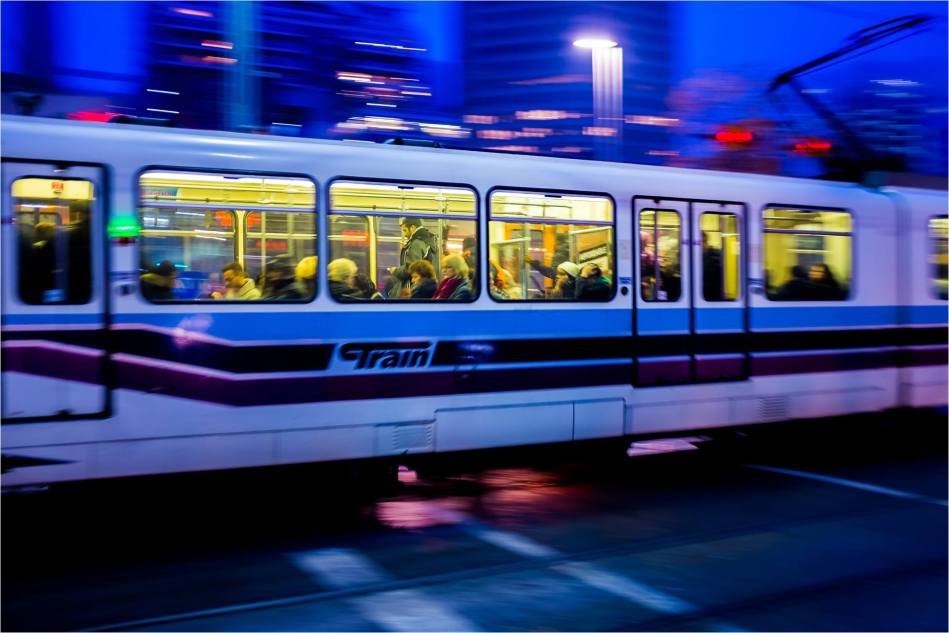 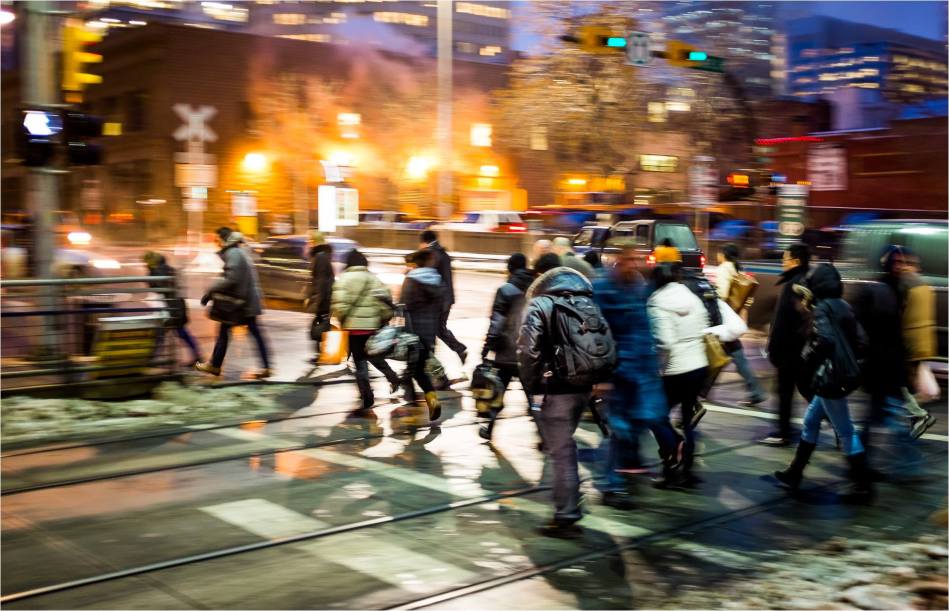 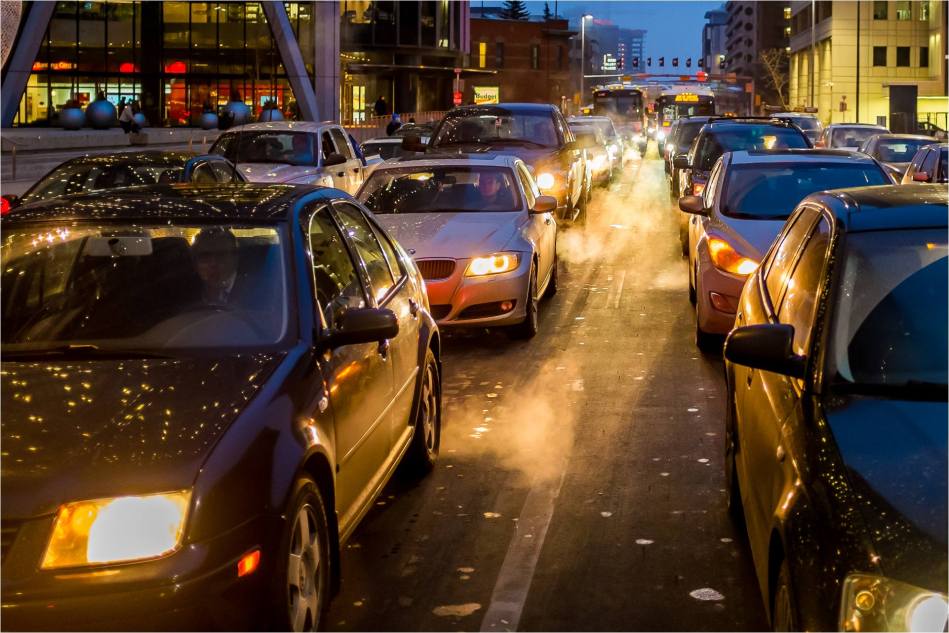 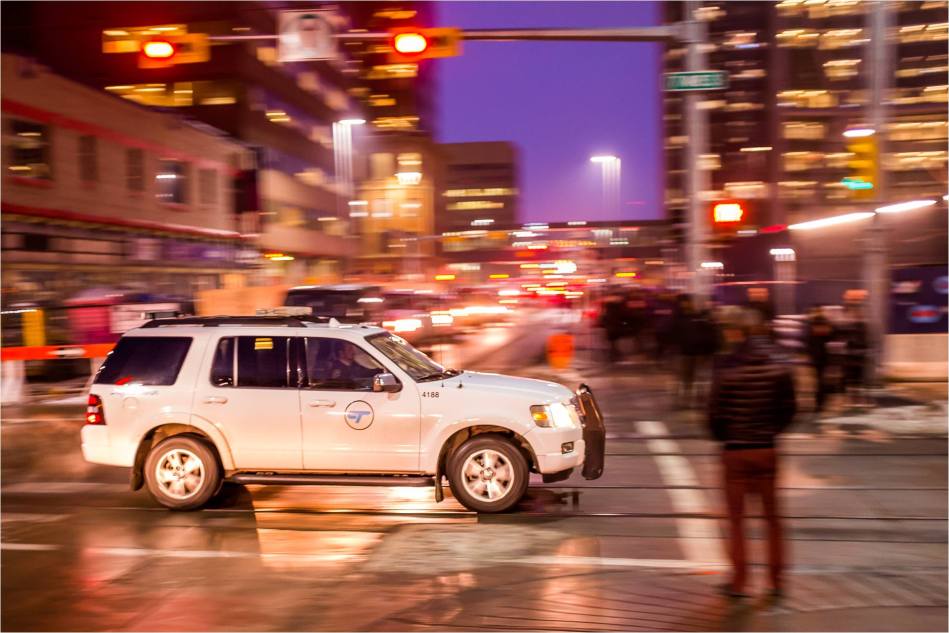 Calgary commutes: driving out of downtown 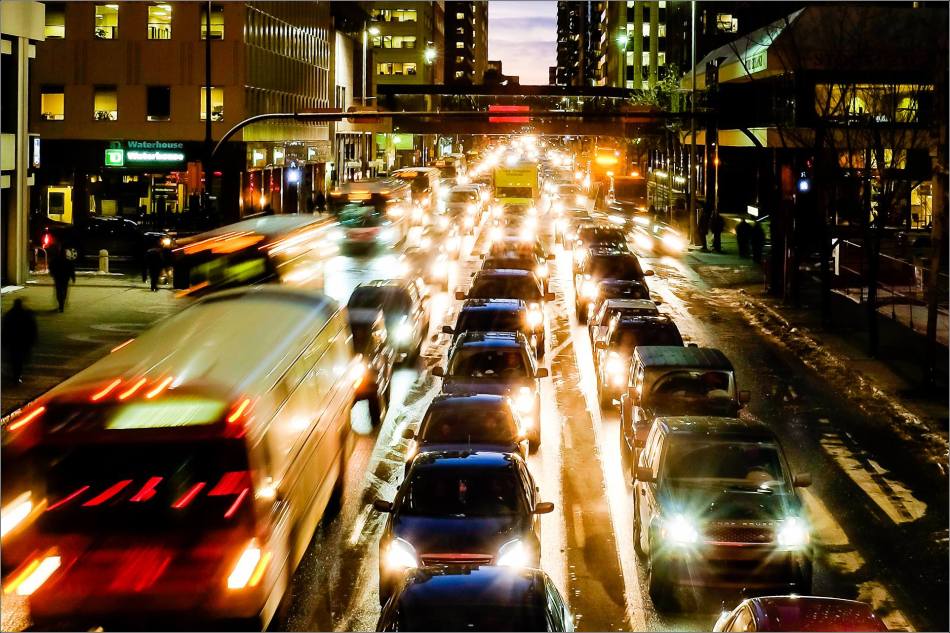 The Plus 15 walkways which are ~5 metres above Calgary’s street level connect the majority of buildings downtown.  This allows people to avoid going outside during cold winter days and provides a great vantage point for watching the bright, orderly retreat of workers from their offices to their homes. 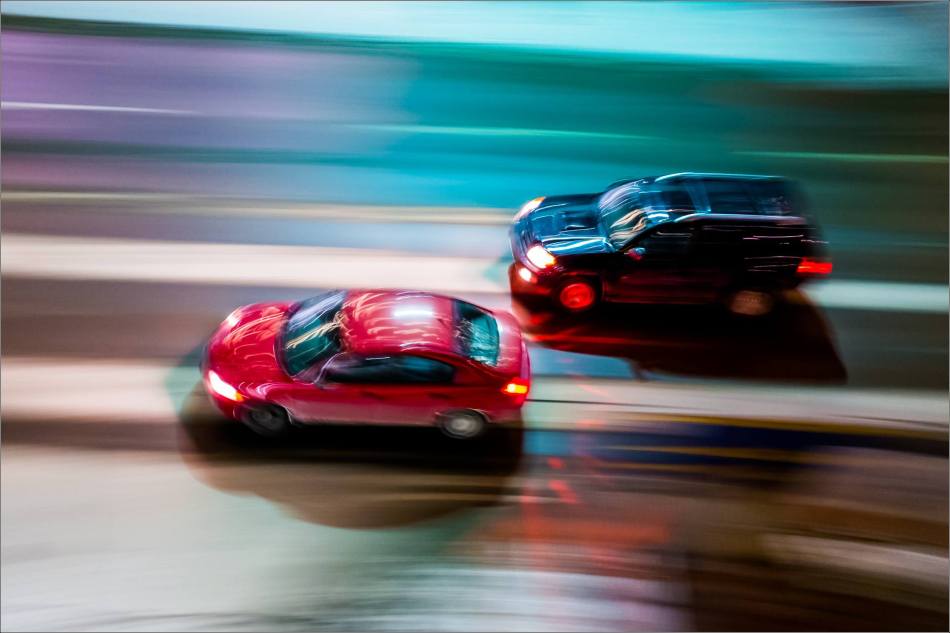 I played around with longer exposures (wishing I had a way to counter the slight bounce in the skybridge due to my fellow Plus 15 pedestrians) and had a moment to appreciate a benefit of the early sunsets that come with the winter months and daylight savings time. 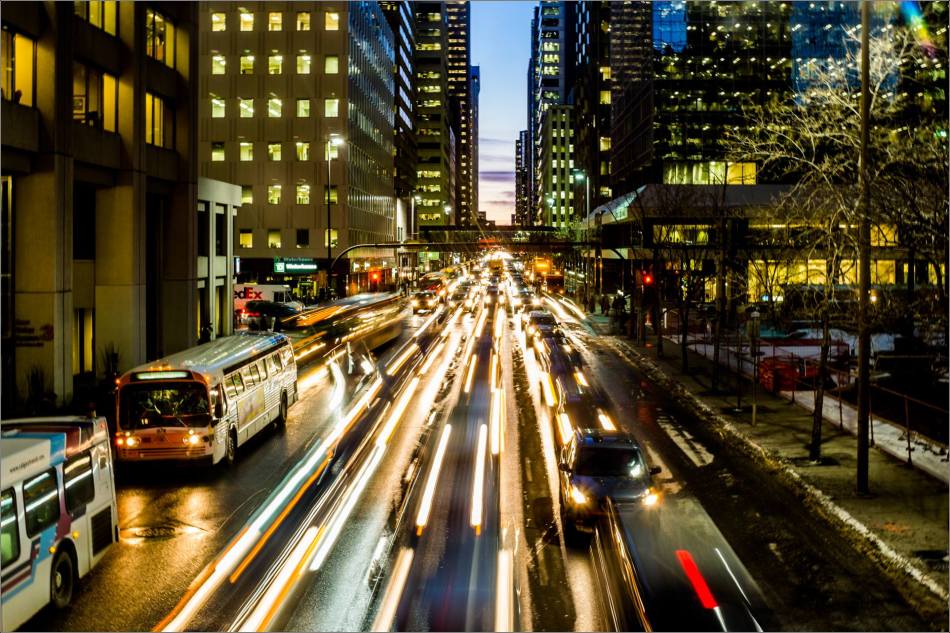