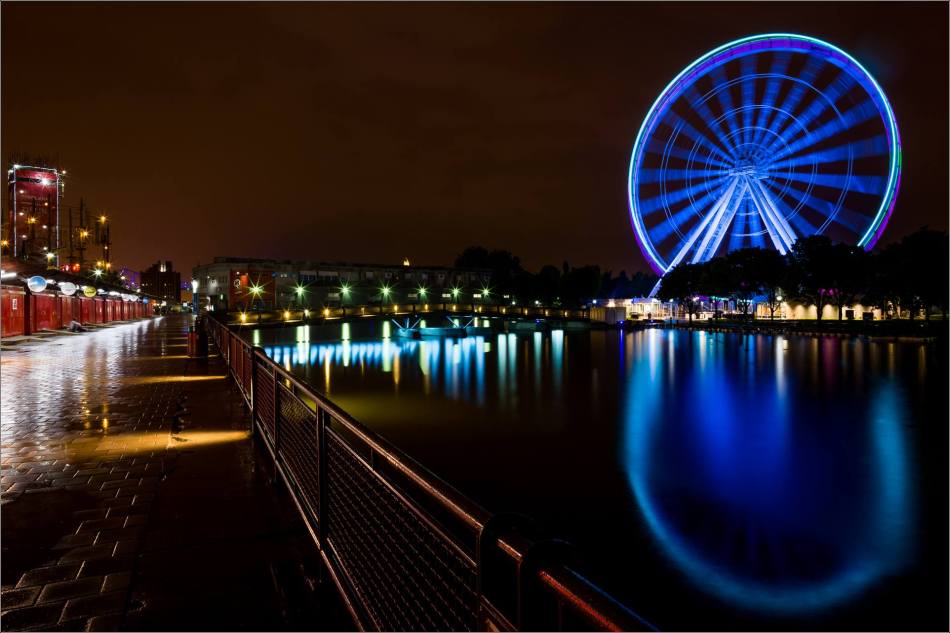 I had an extended layover in Montréal a couple of weeks ago and spent the night photographing in the old port area.  The ferris wheel on the harbour front opened last year and is eye-catching addition to the city’s skyline. I wandered down to the waterfront close to 11 with a warm rain starting to fall which found me thinking about puddles and reflections. 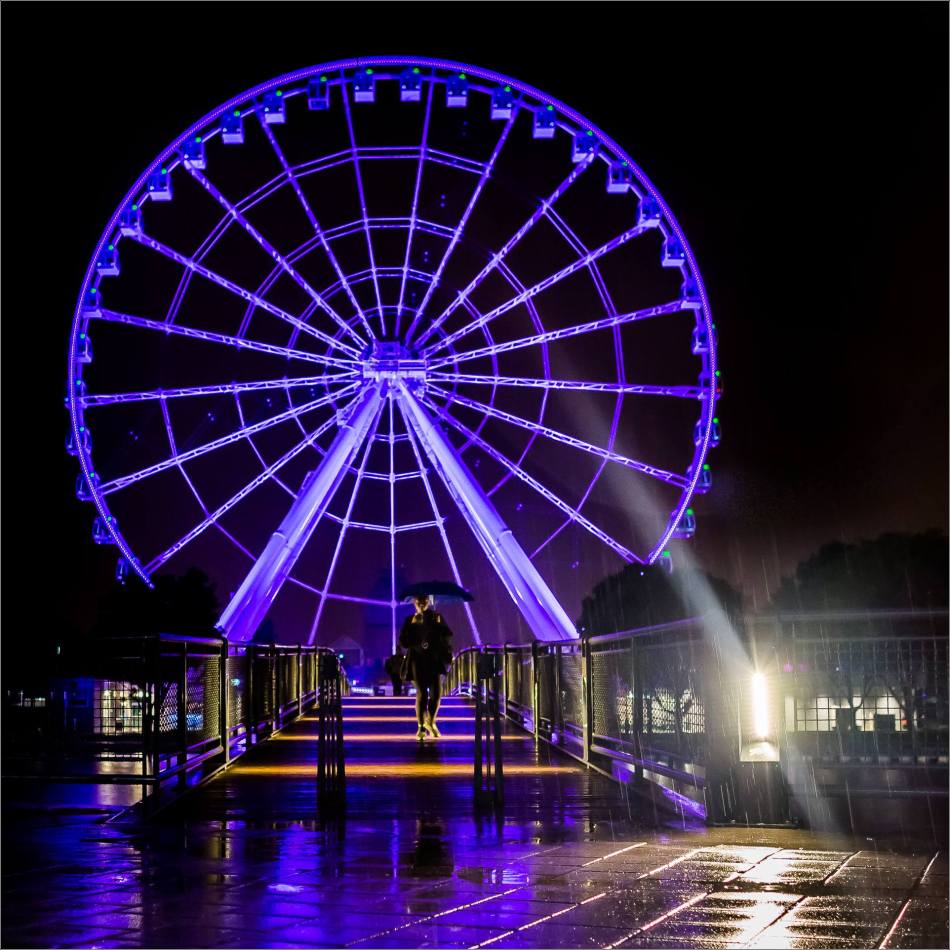 The wheel closed at 11 so I was lucky to arrive in time to watch a couple of the different colors they project onto it while it is open.  Afterwards it is lit in simple white but I liked photographing that too.  I will share some photos from around the old part of the harbour but for this one, it’s all about La Grande roue de Montréal.  There may have been controversy behind this installation and I am a sucker for Ferris wheels but I think it works as part of the waterfront. 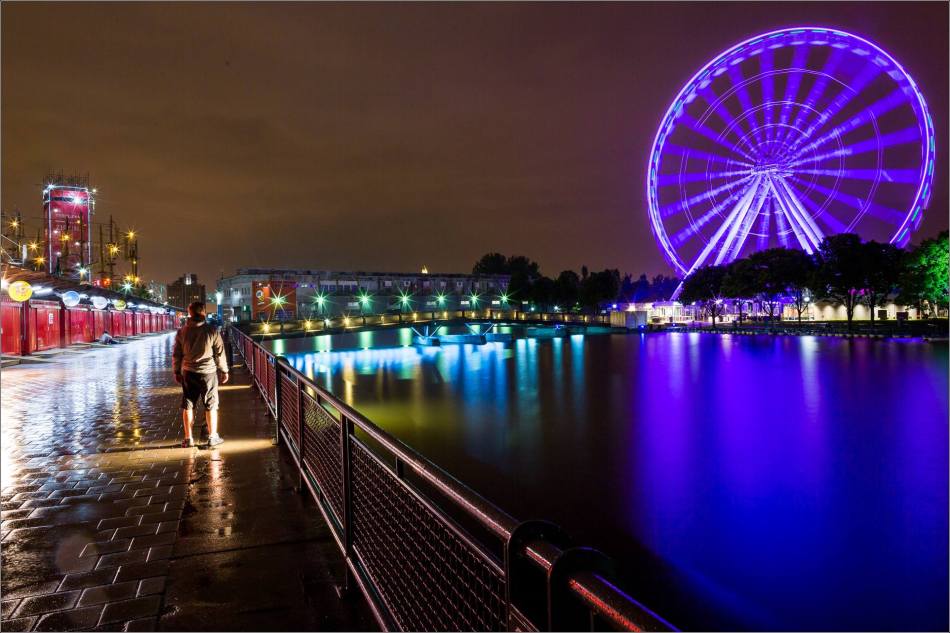 This last one was taken quite a bit later in the night.  I went into the frame to fill the narrow slot with my silhouette.  I didn’t intend for that to add a slightly foreboding tone to the image. 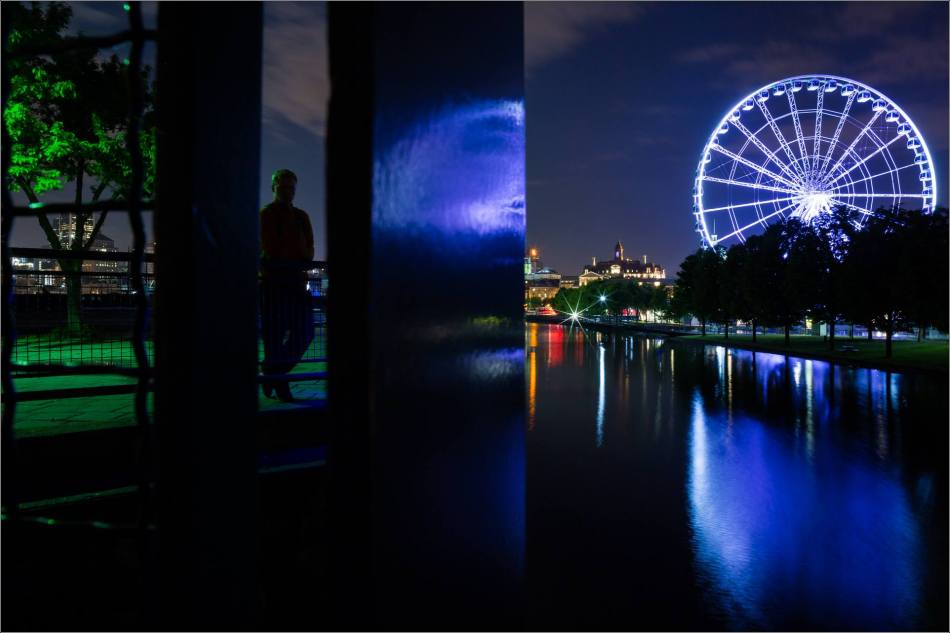 Flashback Friday – a circle of light at the Vermilion Lakes 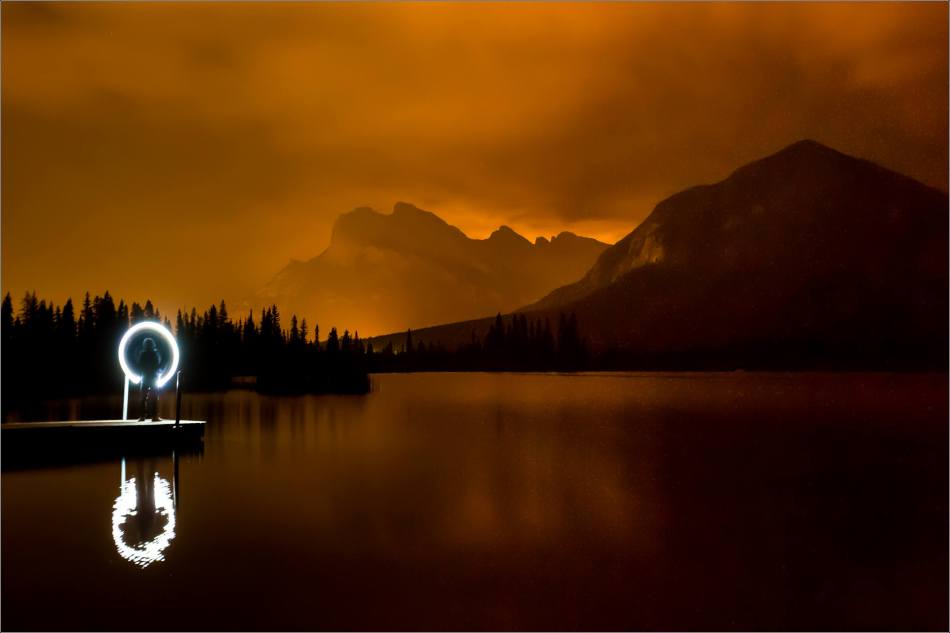 In August I photographed through the night along the Vermilion Lakes.  The air was heavy with smoke from nearby wildfires.  This long exposure caught the glow from the town of Banff as it pushed through thick haze and got caught in clouds hanging low in the Bow Valley.  A timer and a flashlight allowed me to run out onto this dock on the third Vermilion Lake and trace out the circle in this image. 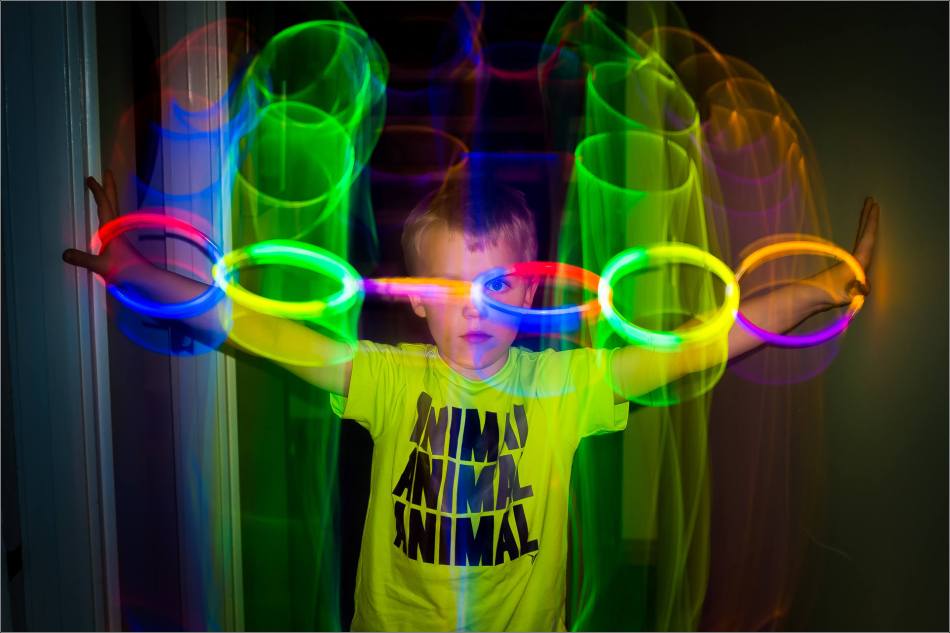 After a great evening with another family who came over for dinner, we enjoyed having some time playing around before bed.  Kian and Kezia had a bunch of glow sticks that they connected together and swung around in the dark.  We had a lot of fun tracing out crazy patterns during a series of long exposures. 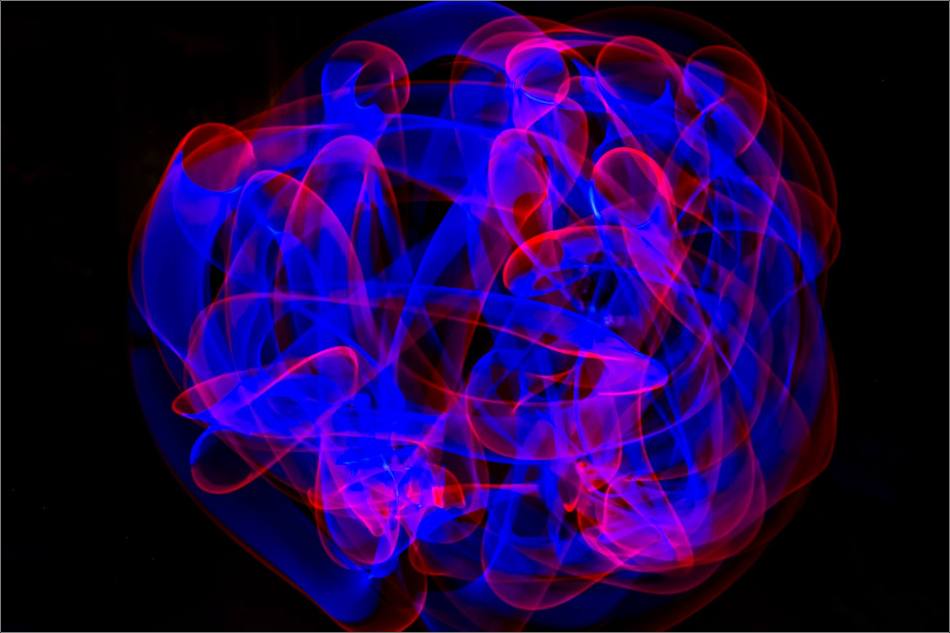 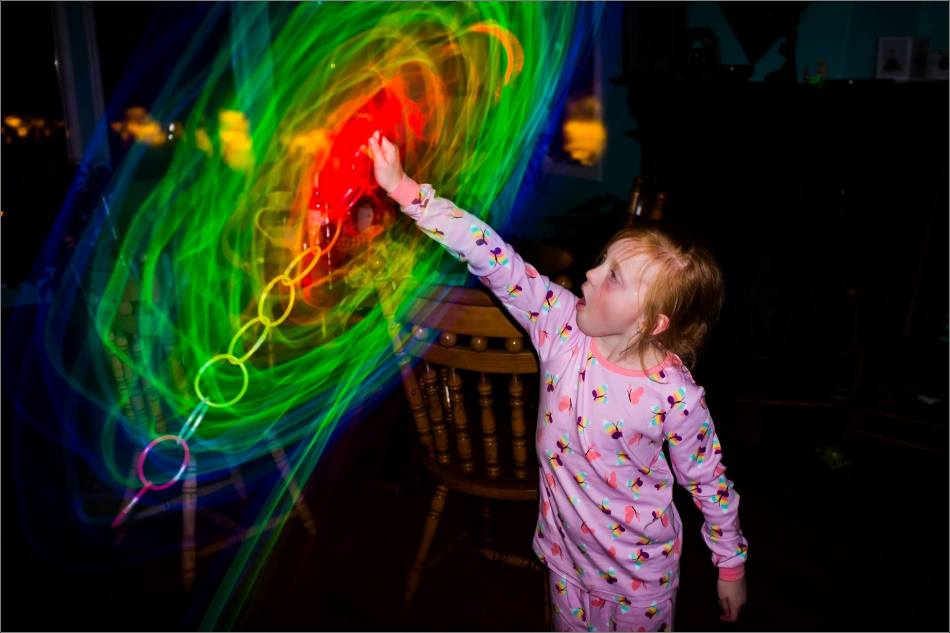 We had another play with night shooting the other night. This time we were under a highway overpass with cameras on a service road and the fire spinner up the concrete support that angles up to the bridge. A good spot as there was only concrete and muddy road, offering stray sparks very little opportunity. Click the picture for a small gallery of images from the shoot. 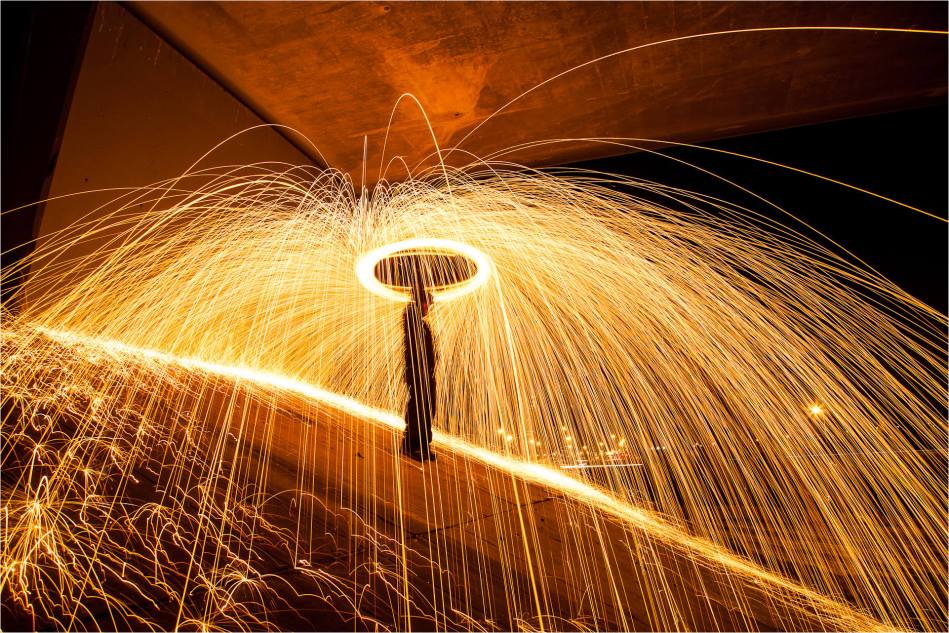 It was a great time thanks to my friends who joined me in shooting and spinning. 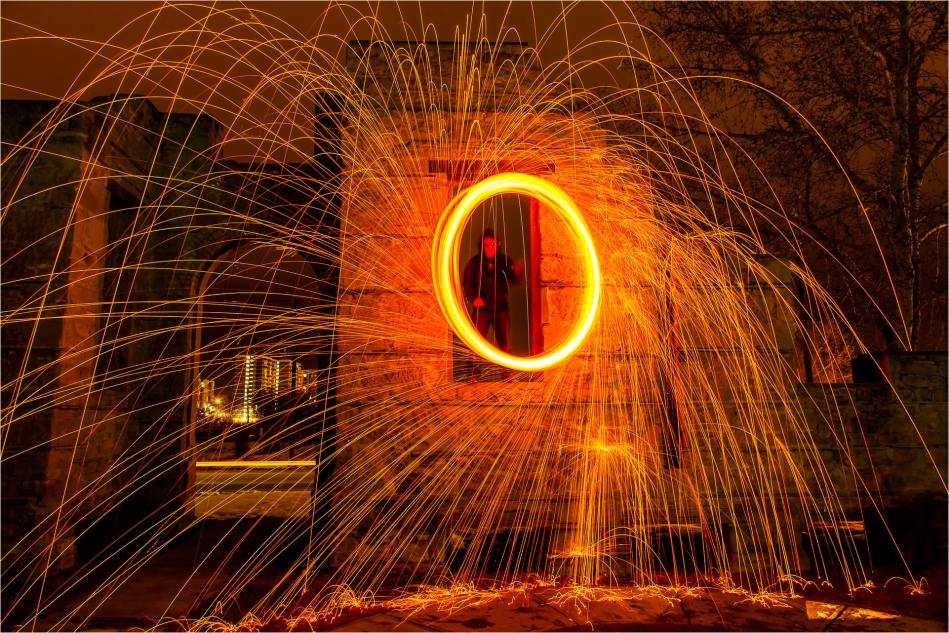 My friend Jeff and I spent some time experimenting with different light sources last night.  Generally referred to as light painting, this is an area of photography that is drawing a lot of people’s creative energy right now.   We confirmed how much fun this can be both to photograph and to play with the light.  We wanted to play around with some of the common tools and see how they worked in practice.  We took turns being the subject (and consequently light-wielder) – Jeff presented great symmetry in his movements which created interesting imagery. By the end, we had learned some things, definitely had fun and now we’re scheming about the images we really want to create.

Note: If you want to see this images larger you can visit this web gallery on my website. 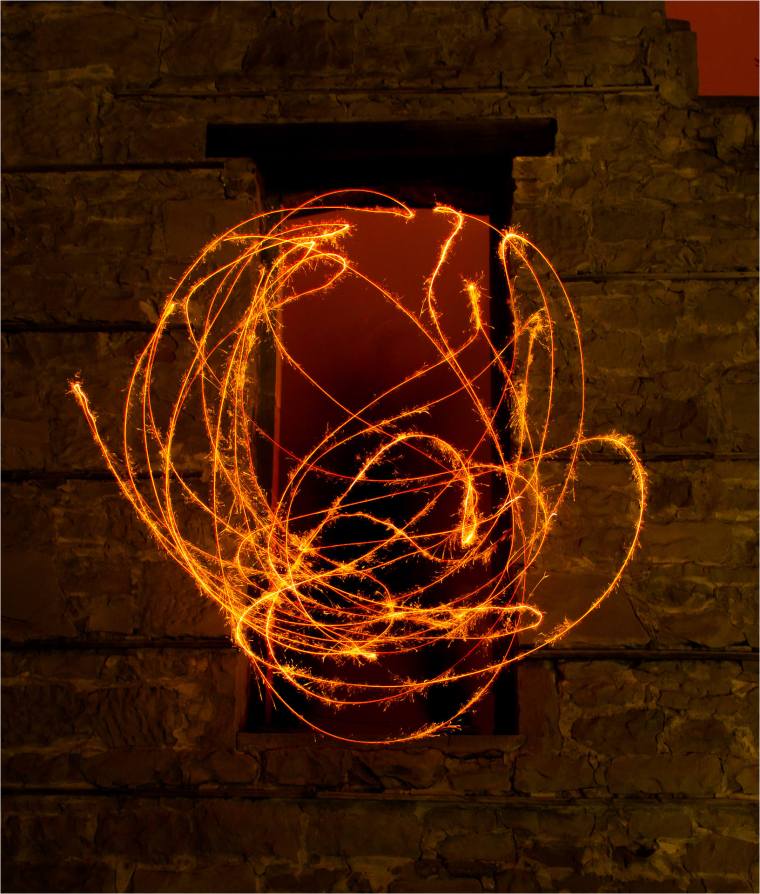 A chaotic globe traced out by a sparkler 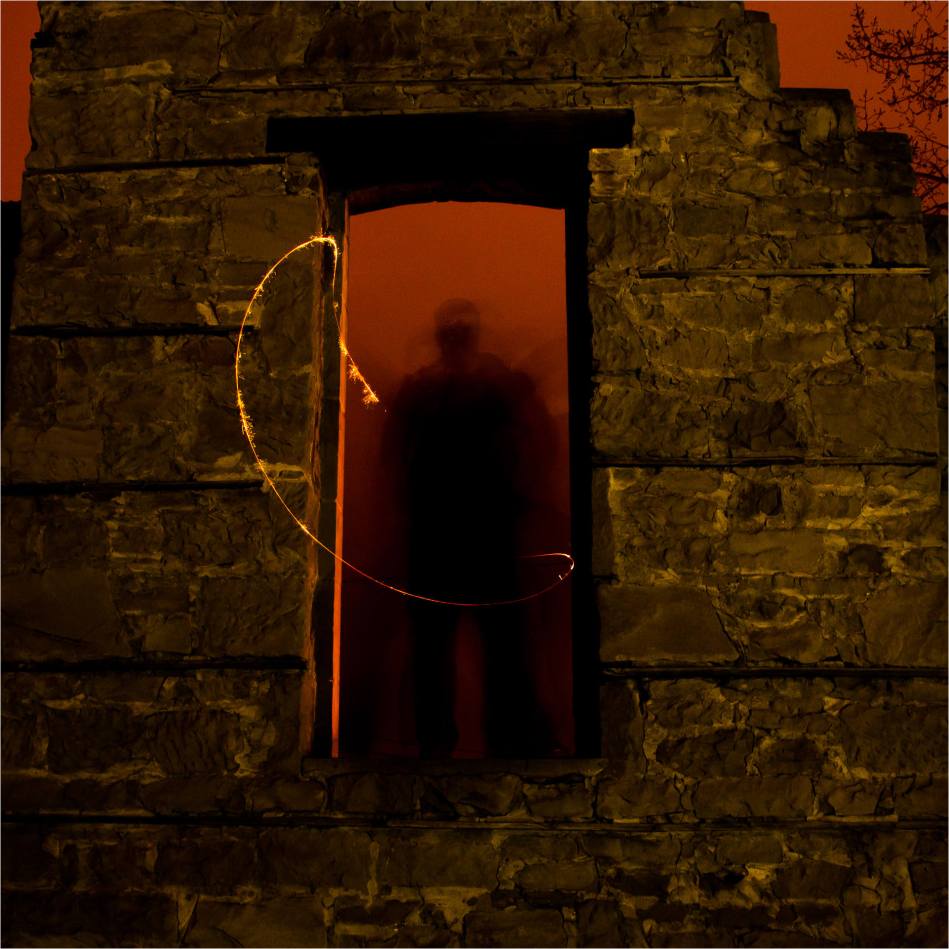 This suggested one of the dark creatures from the fantasy genre.  For those who may have played Dungeons & Dragons, this seemed like a Nightshade to me. 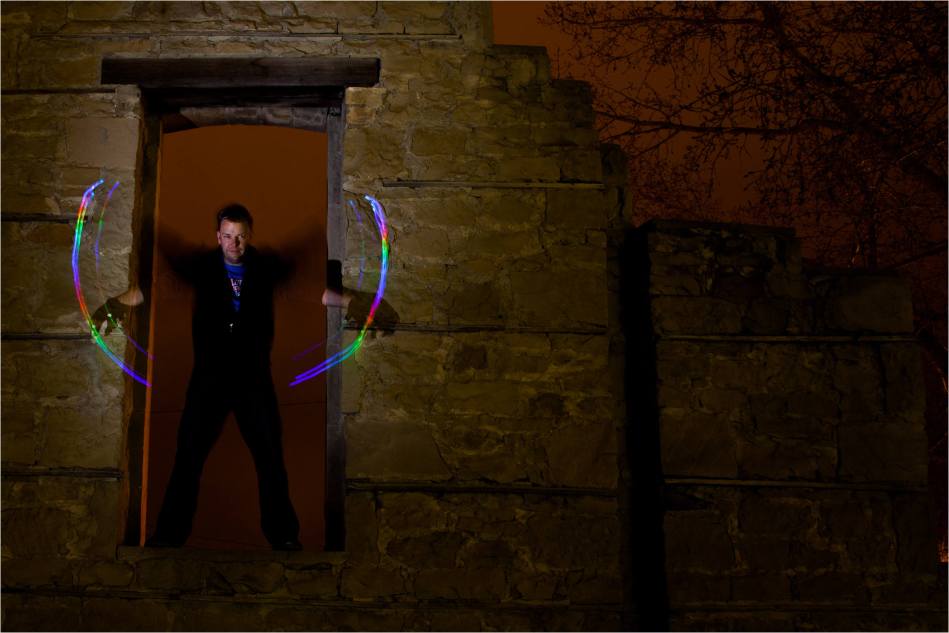 Gloves with green, red and blue lights on the fingertips allowed Jeff to trace out arcs that reminded me a little bit of Leonardo da Vinci’s Vitruvian Man drawing .

The photographs are presented in reverse chronological order (because the fiery ones look so cool so I wanted to put them up first).  However, we approached this session with a measure of sanity and worked up from this glowing ball (one of the many balls in my children’s collective inventory) to the more exciting (read: burning) props.  The image above is one of the first in the shoot where I was looking at ambient light in the area, the brightness of the ball and what flash added to (or detracted from) the scene. 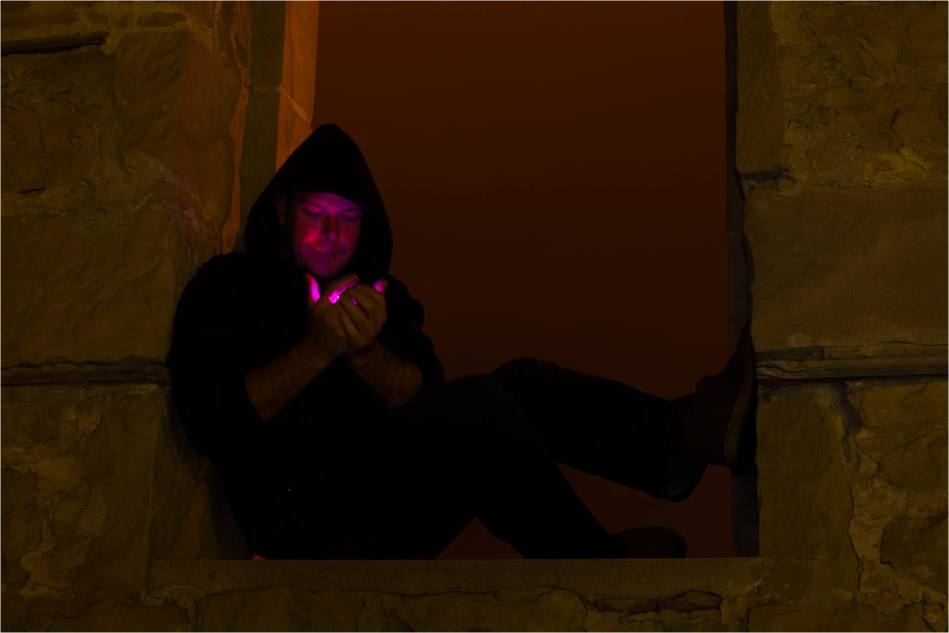 The ball illuminates with red and blue LEDs that alternate creating purple tones in a long exposure.  When Jeff was looking at the ball here it was hard not to be reminded of Gollum and “My Precious” from The Hobbit and The Lord Of The Rings. 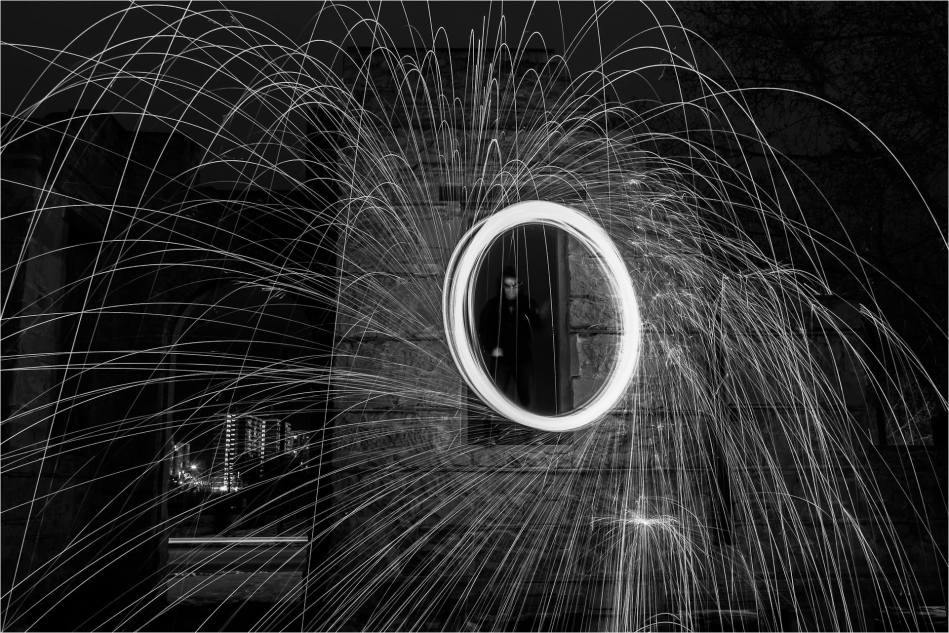 Definitely my favourite photograph of the evening was with the sparks carving out lines of light.  I converted it to black and white below and that changes the image in a different but, to me, equally interesting manner.