A Marten’s stroll at Emerald Lake

When we stayed at the Emerald Lake Lodge in May, our cabin’s deck overlooked the path and the lake beyond.  While sitting outside to enjoy the view, I noticed this little fellow coming down the path.

He looked surprised when I stood up and circled back to have a quick look around.

I said good morning and he carried on with his plans.

I did happen across him the next day as well, this time near a path in the forest but I missed a decent photograph as he darted in and out of the foliage faster than I could find and focus. 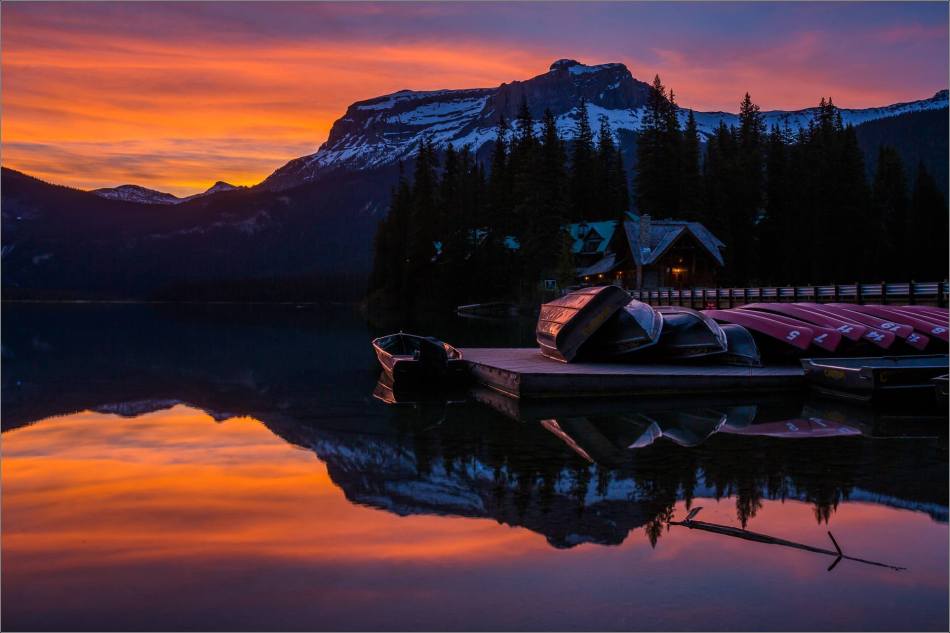 Our family stayed at the Emerald Lake Lodge on the weekend. It is a beautiful lake ringed by peaks including Emerald Mountain and Mount Burgess but can prove tricky for sunrise photography.  I had two mornings where I was able to watch dawn arrive.  I really enjoyed the stillness of the water and its mirroring of the pastel sky.  Both mornings ushered in great days for the kids and I.

The boat house across from the lodge is a beautiful, rustic spot that I love to photograph around when I’m visiting.  I found a few different looks this time around. 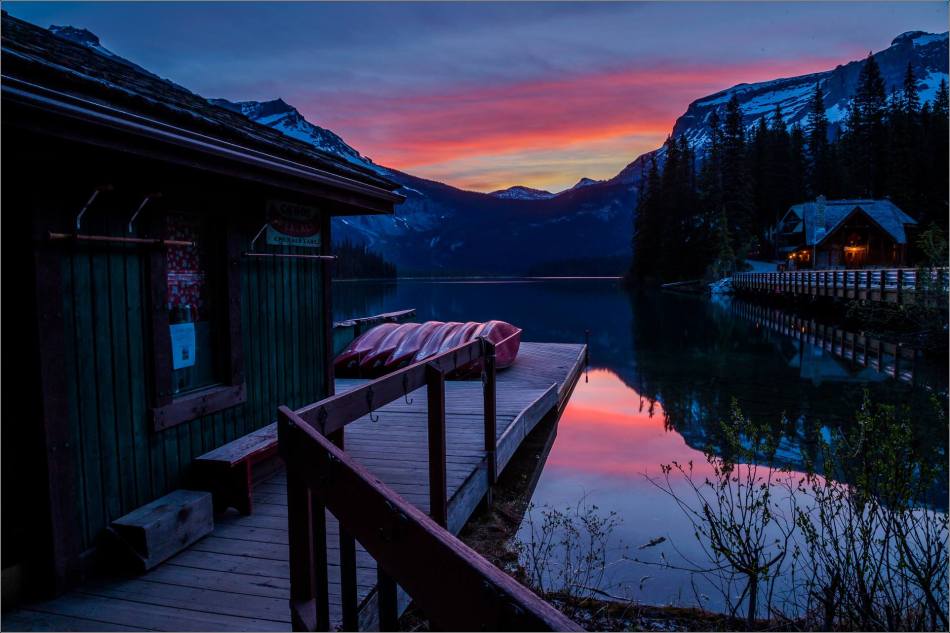 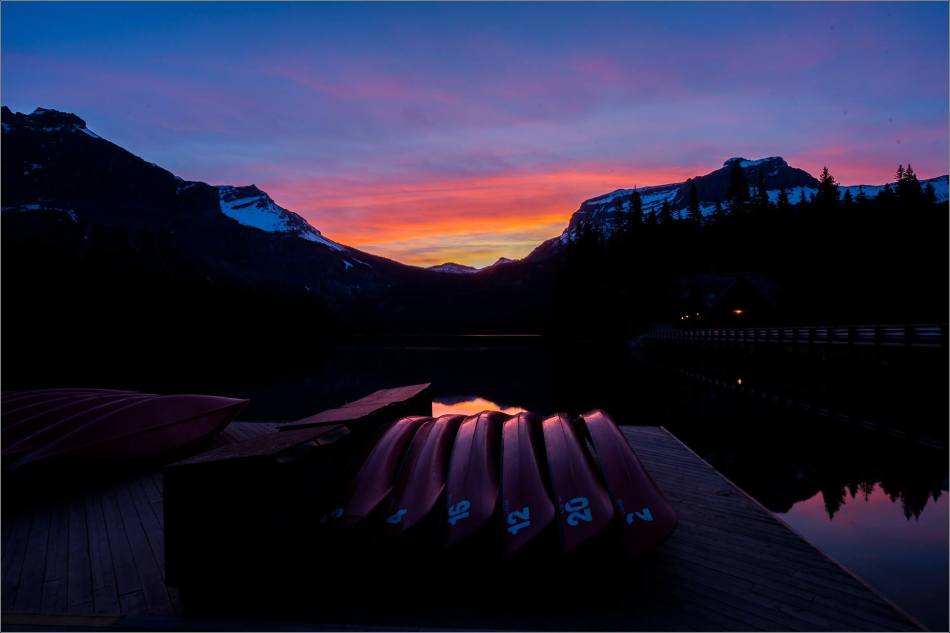 A Sunbow in Yoho

Our family enjoyed a beautiful weekend at Emerald Lake in the Yoho National Park on the weekend.  On Sunday, while enjoying the warm sunshine and vibrant air, Bobbi became aware of a vivid sunbow overhead.  Many spiritually attuned cultures and people have stated this is a sign from the creator and can mark a time of great change or transition.  We were honoured to share space with this one.

“There will come a day when people of all races, colors, and creeds will put aside their differences. They will come together in love, joining hands in unification, to heal the Earth and all Her children. They will move over the Earth like a great Whirling Rainbow, bringing peace, understanding and healing everywhere they go. Many creatures thought to be extinct or mythical will resurface at this time; the great trees that perished will return almost overnight. All living things will flourish, drawing sustenance from the breast of our Mother, the Earth.

The great spiritual Teachers who walked the Earth and taught the basics of the truths of the Whirling Rainbow Prophecy will return and walk amongst us once more, sharing their power and understanding with all. We will learn how to see and hear in a sacred manner. Men and women will be equals in the way Creator intended them to be; all children will be safe anywhere they want to go. Elders will be respected and valued for their contributions to life. Their wisdom will be sought out. The whole Human race will be called The People and there will be no more war, sickness or hunger forever”

The text of the prophecy is copied, with permission, from Dorothy at the Life Heart and Soul blog.

Raven is the creator in some Native American histories.  There were two ravens circling inside of the ring which made the experience increasingly profound.  The two ravens can be seen only as specks in the second photo – one just to the left of the sun and the other just above the leftmost tree’s silhouette.

Nighttime at the boathouse on Emerald Lake

Bobbi and I got away to Emerald Lake last weekend for a little retreat.  The valley is in the Yoho National Park in British Columbia, about two and a half hours from Calgary.  We had a great time enjoying time on the land and enjoying the fine amenities offered by the Emerald Lake Lodge.  We have to thank both sets of grandparents for taking care of Kezia and Kian.  I spent most of the night out photographing around the water.  The image above is looking down the stairs to the boathouse where you can rent canoes and row boats to take out on the lake.  There was a wedding in the lodge where Cilantro’s restaurant is located across the bridge.  The lights from the party and the bridge illuminated the little cabin and the stacked boats.  Emerald Lake is a wonderful place to visit – we are already plotting our next return visit.

We stayed one night in the lodge on Emerald Lake in British Columbia so I was able to be on the water’s edge well ahead of sunrise the next morning.  In the deep blues of the early morning, I could make out some heavy clouds in the sky so I was uncertain if a fiery sky was coming.  The mountains that ring the eastern edge of the lake were streaked with thick fog rising off of the water and mixing with the clouds. 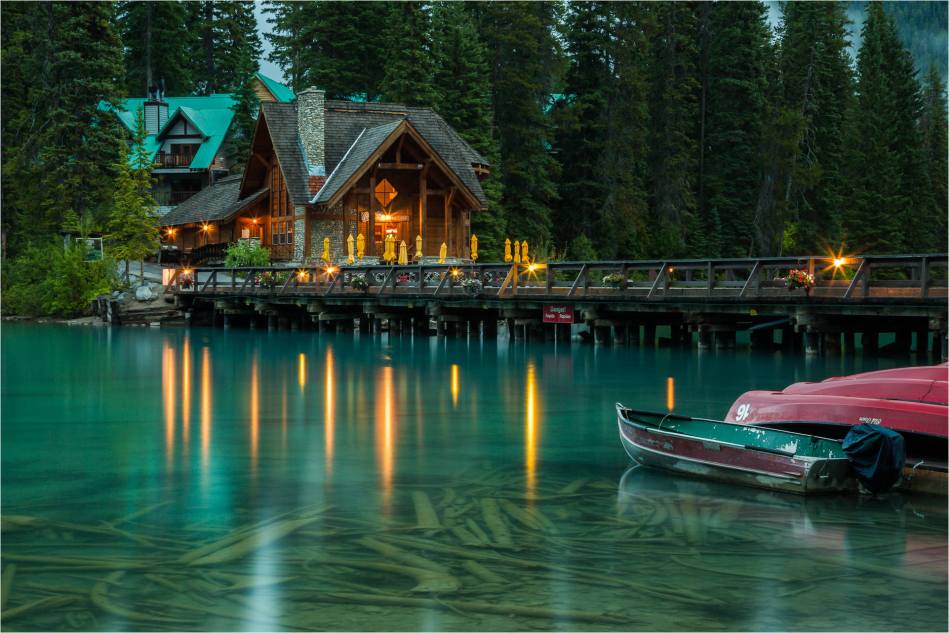 The sunlight was held up by a bank of grey so the drama never painted the sky however the details in the canoes, the bridge and along the shore as well as a slow shutter to drag out the sky and its reflection made for an enjoyable scene to work with. 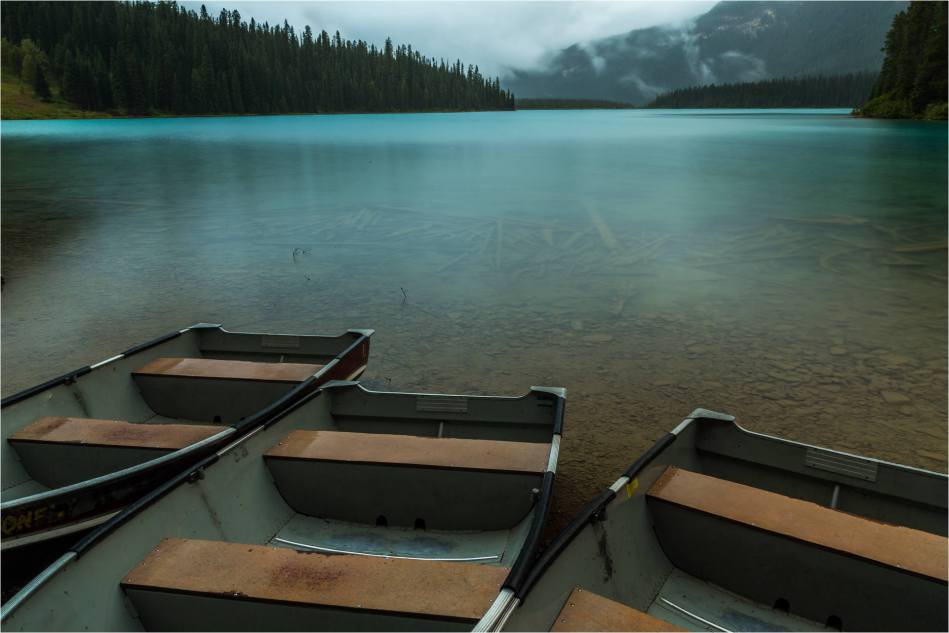 I’m looking forward to getting back to this literal jewel of the Yoho National Park near the town of Field.  A glowing sky of pinks, reds and oranges would be wonderful to see in this valley and reflected in the lake. 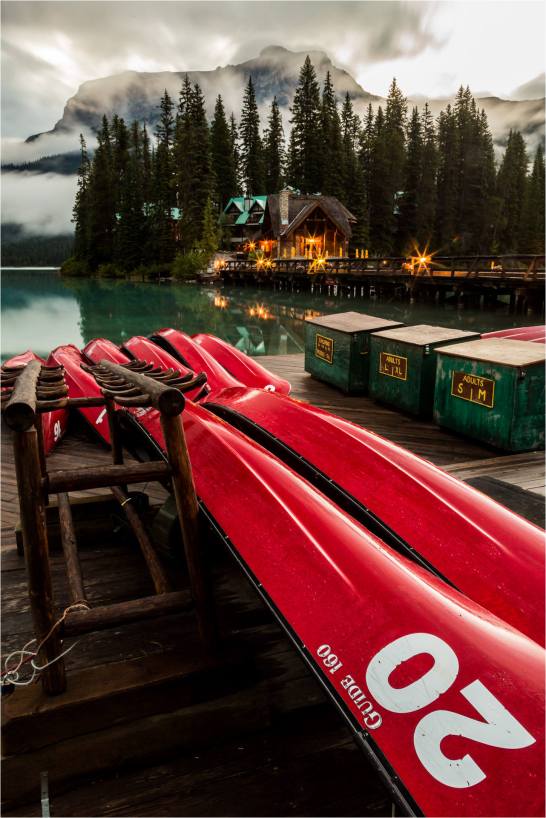