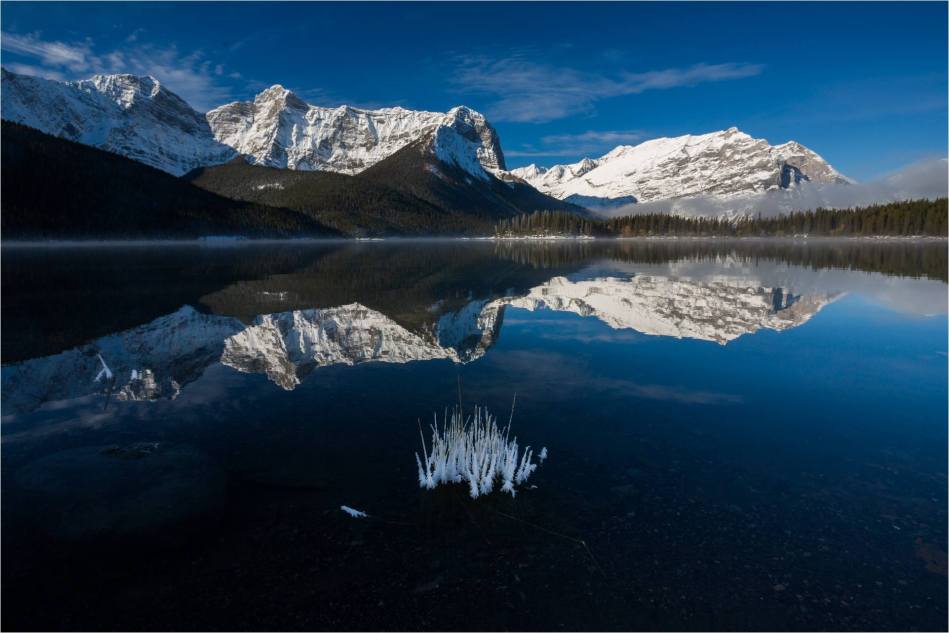 A touch of winter froze blades of a partially submerged mound of grass and laid down several sheets of snow on the peaks ringing the lake before autumn returned. Photographed in Kananaskis Country’s Peter Lougheed Provincial Park in Alberta, Canada on October 7th.

A common loon swims in front of a low, rocky island on a calm, smoky morning on Upper Kananaskis Lake.  Haze from the wildfires to the west was thick in the mountains and often hid the mountains that ring the lake.

This image of a summer sunrise at Upper Kananaskis Lake in the Peter Lougheed Provincial Park has been selected as one of National Geographic’s Daily Dozen for October 5th.

The yellow border is a siren call for many photographers – and certainly is for me.  I have had several images published on National Geographic’s websites but the novelty never wears off so it’s a great start to the day!

There is voting on each day’s twelve images that are selected by one of the National Geographic editors.  The image which receives the highest number of votes has the potential to be published in the National Geographic magazine.  If you do check out the today’s Daily Dozen, have a look at the images and vote for the one that you like best.  I really love Nguyen Tat Thang’s photograph of mist and fog over the city of Dalat in Vietnam.

This summer I feel like I have rediscovered the Kananaskis Lakes located in the Peter Lougheed Provincial Park.  In particular, I have spent a lot of time at the upper lake.  The peaks that ring the lake have appealed to me recently in a new way and I have been drawn to visit at different times of the day to photograph them.

The jagged profiles, mirrored reflections and rocky shoreline are all elements I love to work with and the Upper Kananaskis Lake knits these together in a beautiful way.  These are a few of the photographs I like from these visits. 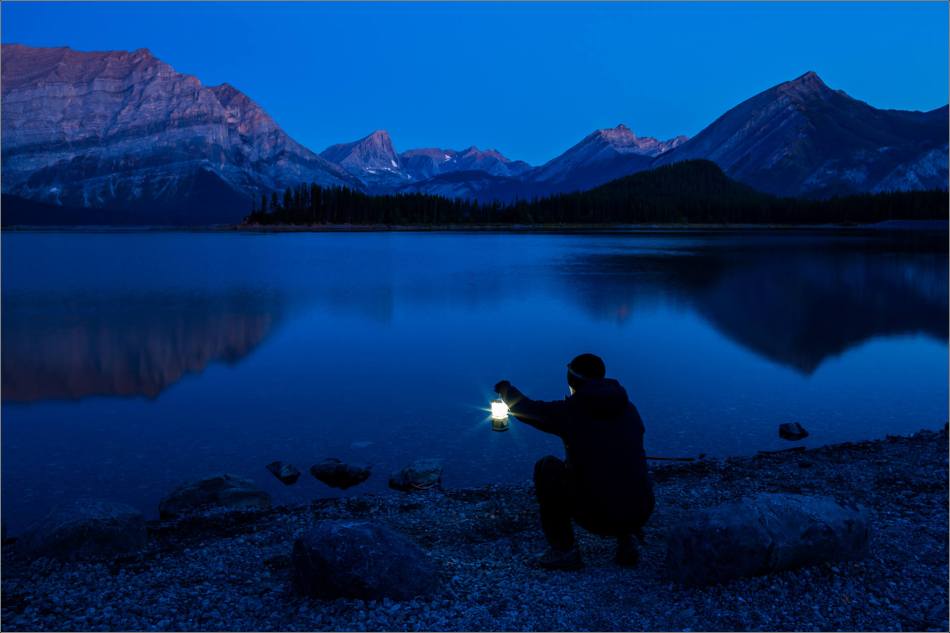 And here are some evening shots from an earlier post this summer as well.  It’s a beautiful place to spend time.

On my way up to the mountains this weekend, the sun continued its struggle with the smoke from the wildfires.  In the early evening I made my way along Highway 40 and stopped several times to watch the clouds and sun in this unusual scene. 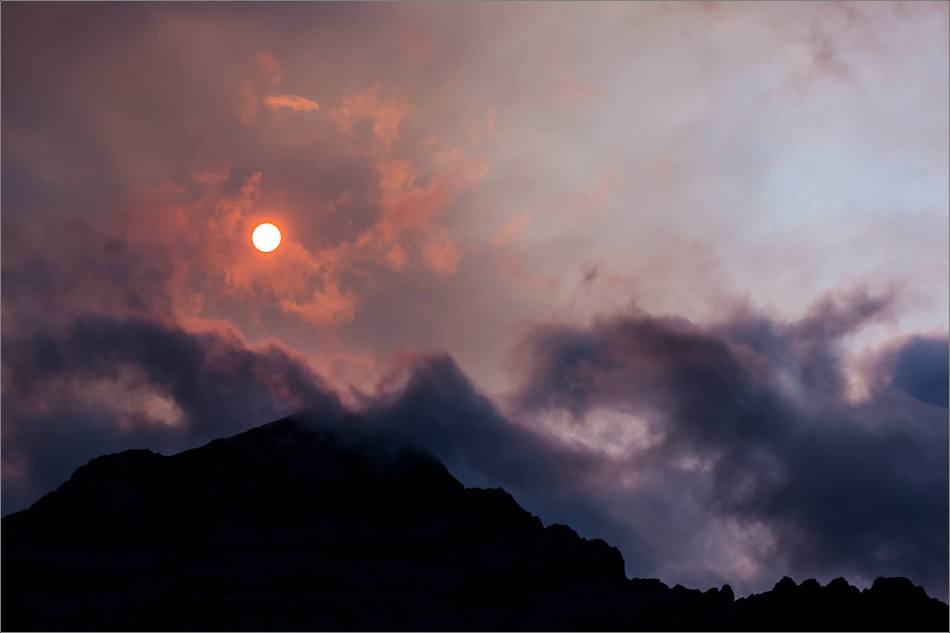 I ended up on the shore of the Upper Kananaskis Lake about an hour before sunset.  It was a warm night which I was grateful for – even in summer the wind can blow hard and cold across the lake at anytime. Over the next couple of hours a loon, a few people fishing and one large, extended family came and went.  I moved down the shoreline slowly, taking photographs of the sun’s descent towards the jagged silhouette of the mountains the curve around the lake.

The smoke acts like a neutral density filter and drops the intensity of the sun’s light considerably.  That allowed me to spend a lot of time exploring how the atmosphere, the sunlight and the landscape could be composed.  All three changed in appearance and shape as the sun descended.

When the sun drew close to the mountains, the colors deepened and the silhouettes of the mountains were fantastic against the sky. 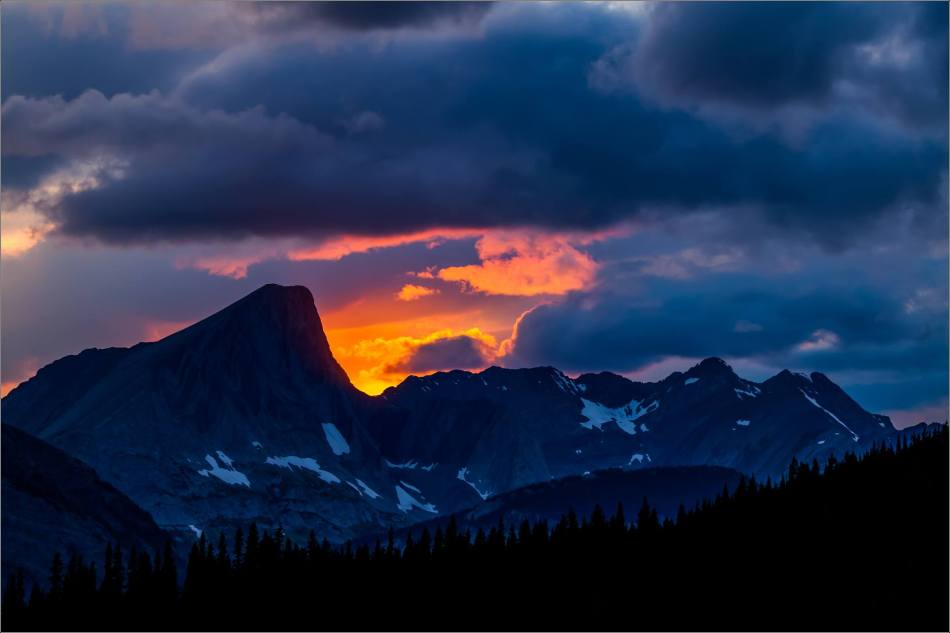 The fiery hues disappeared quickly once the sun fell behind the mountains.  That left cooler tones to quietly take hold.  At that point, I was alone on the shore and the tranquility held me there for a long while. 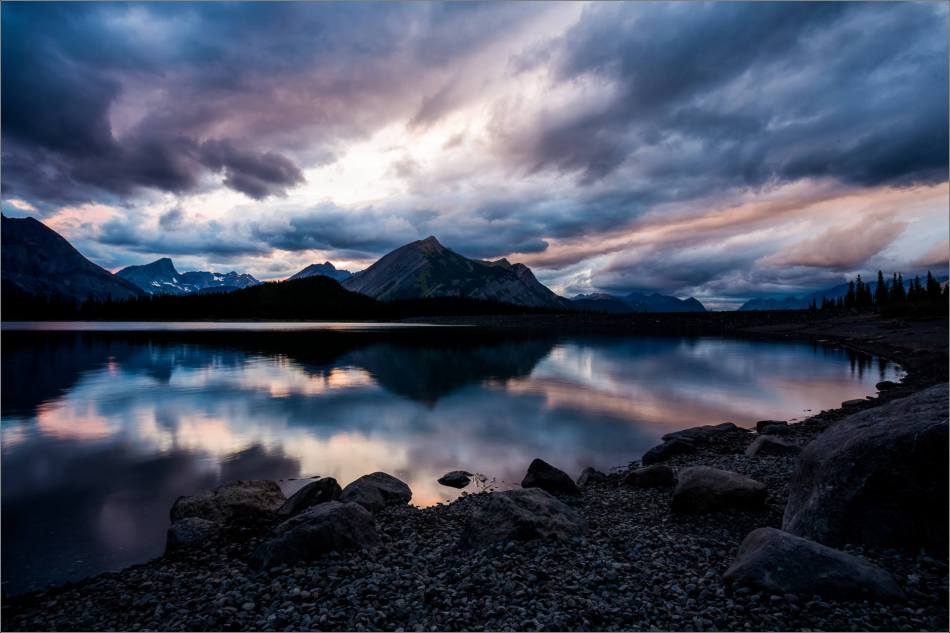 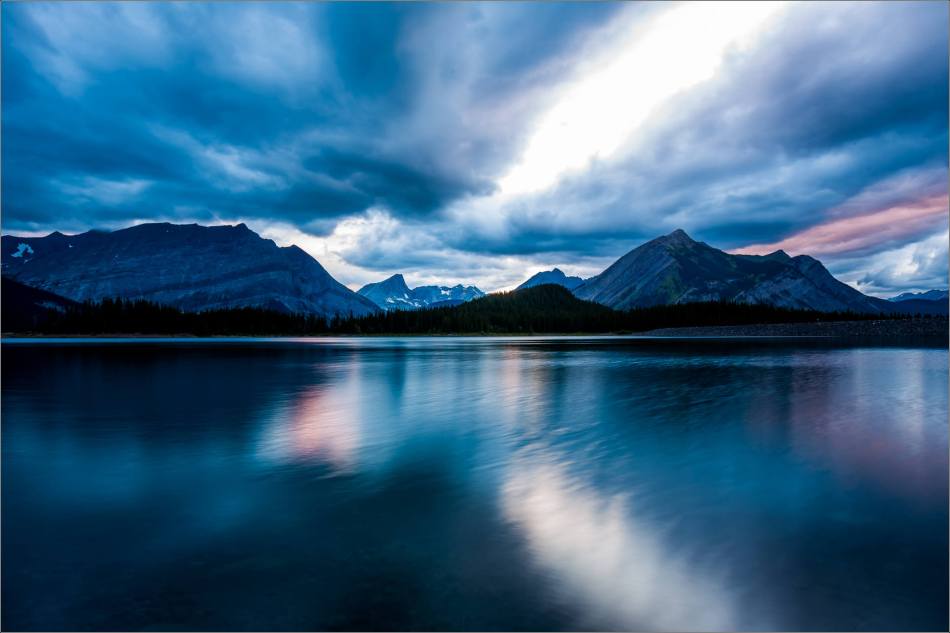 A storm over Upper Kananaskis Lake

Back in October, before the snow had decided to stick around, I spent a stormy morning along the shoreline of the Upper Kananaskis Lake.  The valley couldn’t decide if it was fall and should therefore rain or winter with its snow.  The compromise was a heavy sleet that came across the lake in sheets.  Above, the clouds stretched apart and welded back together as the wind dictated. 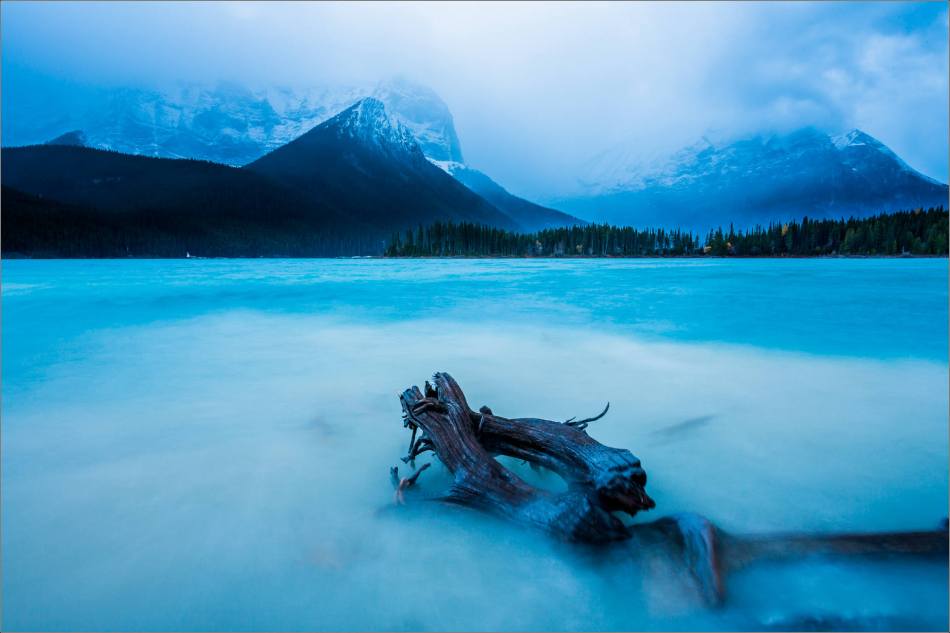 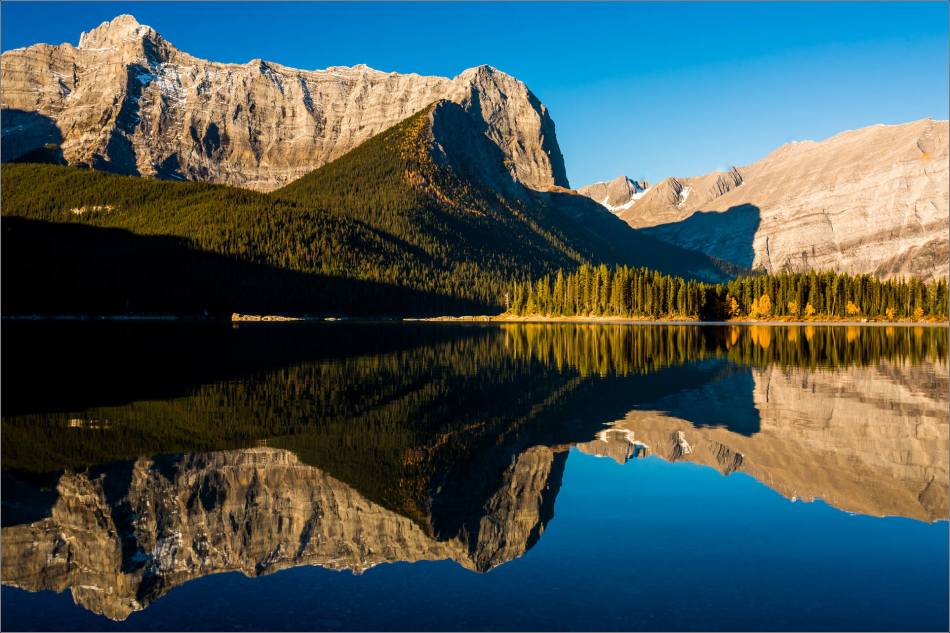 I started a great day in Kananaskis earlier this weekend walking along the shoreline of the Upper Kananaskis Lake in the Peter Lougheed Provincial Park.  At sunrise I was photographing a pair of moose, a mother and her calf, in a meadow and I ended up spending most of the morning at the Sarrail Falls.  However, when I parked near the boat launch at the lake, the soft light, subtle autumn accents, calm water and brilliant reflection of the mountains in the water mesmerized me for several minutes.  I had the lake to myself for a little while and enjoyed the beauty immensely.

The storm blew over in waves as I trekked around the Upper and Lower Kananaskis Lakes in the Peter Lougheed Provincial Park yesterday.  Obscuring the far shoreline first, then moving across the ice and rolling over me.  This cycle repeated at both locations and allowed for some moody landscape photographs.

At the Lower Kananaskis there was a stretch of open water below the control station which manages the flow between the two lakes.  The patterns along the edge of the ice worked nicely with the distant lines in the forests and mountains.

Away from the water’s edge there was a man ice fishing on the lake.  I made this one image of him standing over his fishing hole – the compression of the lens telephoto lens makes him look quite close to the edge but he seemed a safe distance. 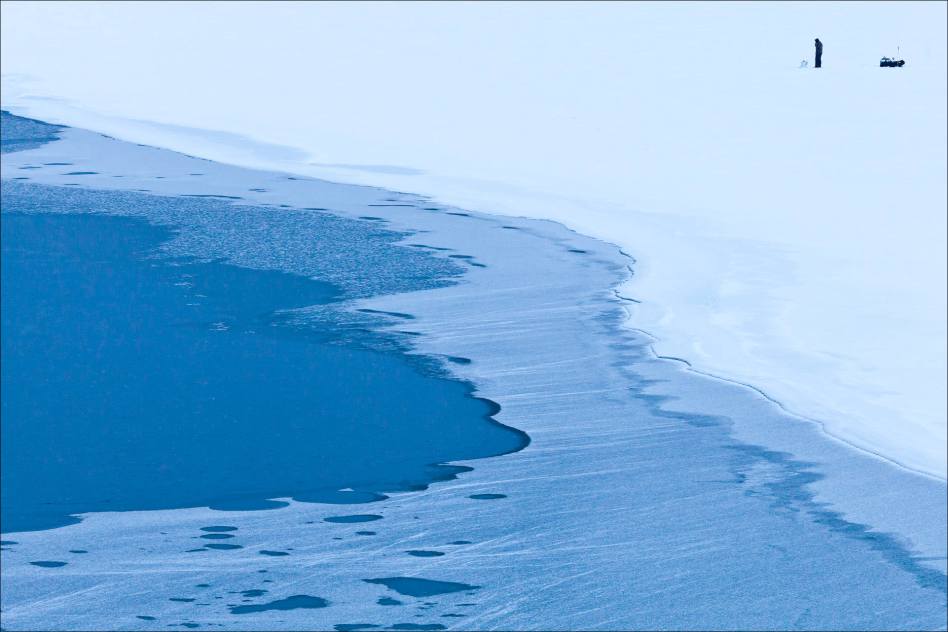 Upper Kananaskis Lake is completely frozen over now.  The blizzard was at its height when I was there so I waited between waves where I could see across the lake to the rock island and silhouettes of the peaks looming over the west edge of the lake.