A new portfolio of landscape images

This is a collection of a my favourite landscape photographs from the past couple of years.  Locations include North America’s Rocky Mountains, the Prairies, and the island of Kaua’i.  If you are interested in having a look, please click on this link or on the image above.

On the weekend I was out early combing the prairies west of Cochrane, Alberta for wildlife.  The clouds were heavy from rain overnight and had only started to thin out at dawn.  I was driving northward along a hillside gravel road when I saw a couple of ravens explode out of a tree on the edge of the ditch just ahead of me.  Watching them fly in haphazard circles it seemed something had stirred them up.  In a break between a few of the trees, I caught a flash of something racing through the field away from the birds.  I was going 40 km/h when I looked at the speedometer and this creature was pulling away from me.  I sped up and realized I was alongside a Red Fox.  It was about a 100 metres from the fence dividing the field and was absolutely flying. 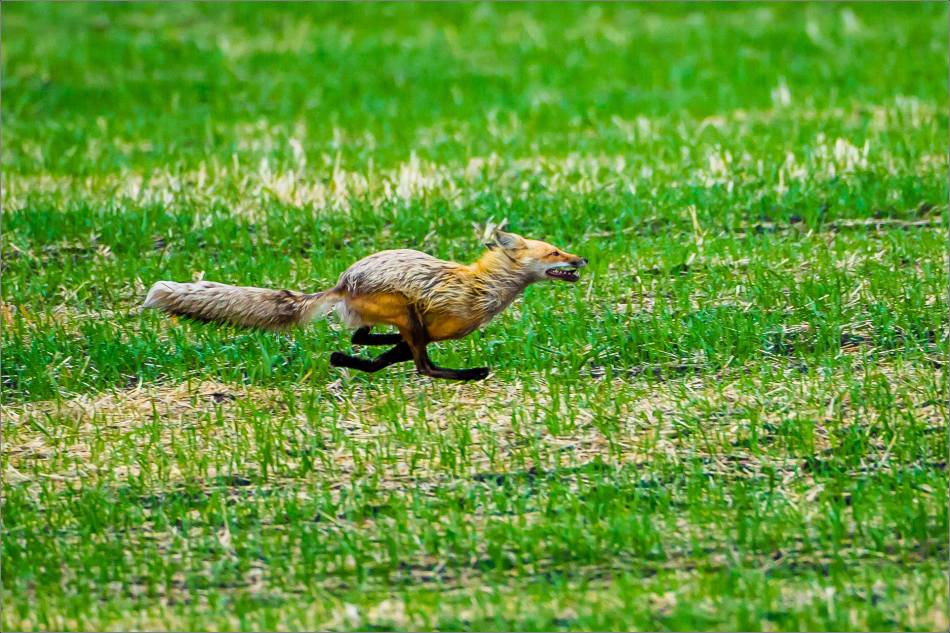 For the few hundred metres that we traveled in parallel, we were going at 50 km/h.  Its stride was incredible – fast, powerful and efficient.  The back and tail were straight as an arrow and the legs were a blur as it hurtled along.  I have never witnessed an animal move so fast on the ground (I can’t imagine watching a Cheetah!)  My camera was in the passenger seat and my window was already down so I had to try to photograph this sublime athlete in motion.  There were three openings between the trees over the distance we covered together.  The last one had a small rise that the fox disappeared behind and the first one yielded six out of focus shots.  But, the middle gap was a little bigger and I was able to focus and capture three good frames.

Before a fourth break in the trees, the fox veered downhill directly west across the green field.  This last image with it close came as I was slowing down and it was turning away. 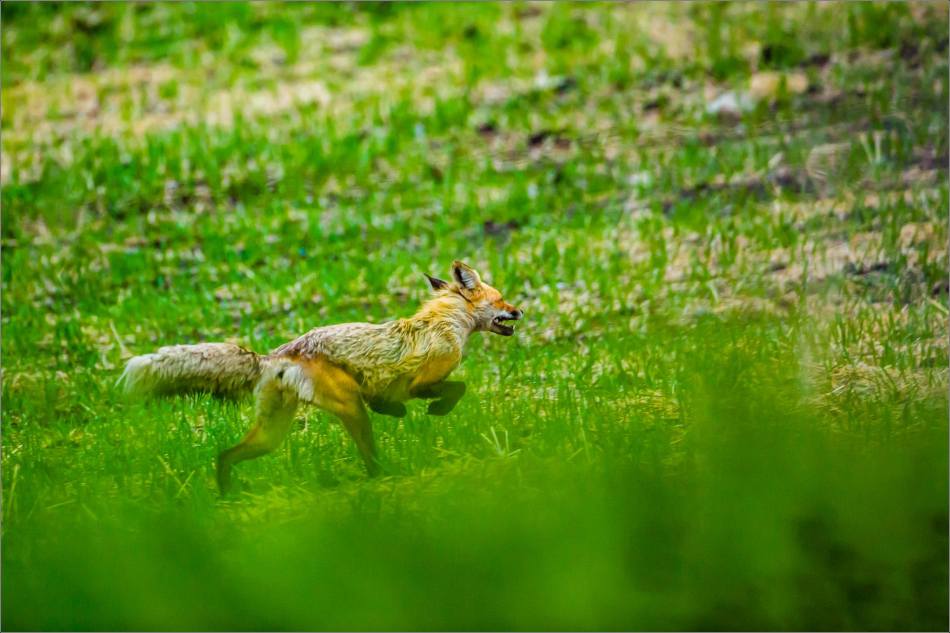 I stopped to watch it bound away.  That’s when I noticed that the ravens had been chasing the fox since they flushed out of their tree.  Probably it had come too close to their nest and the birds wanted to make sure it did not come back.  They banked with the fox when it turned and followed along across the field.  About a kilometre down they stopped the chase, circled higher for a minute and then glided back towards their tree.  When the chase ended the fox checked up beside a creek, grabbed a quick drink and then stared in my direction for a minute.

For its part, I don’t know if the fox grabbed an egg or a chick before being chased off but it seemed to have a contented look on its face to me.  With the remnants of a winter coat still wet from the rain and the rich colour on the face and flanks, I think this fox was a magnificent animal.  It was an amazing encounter that I could not have dared to imagine. 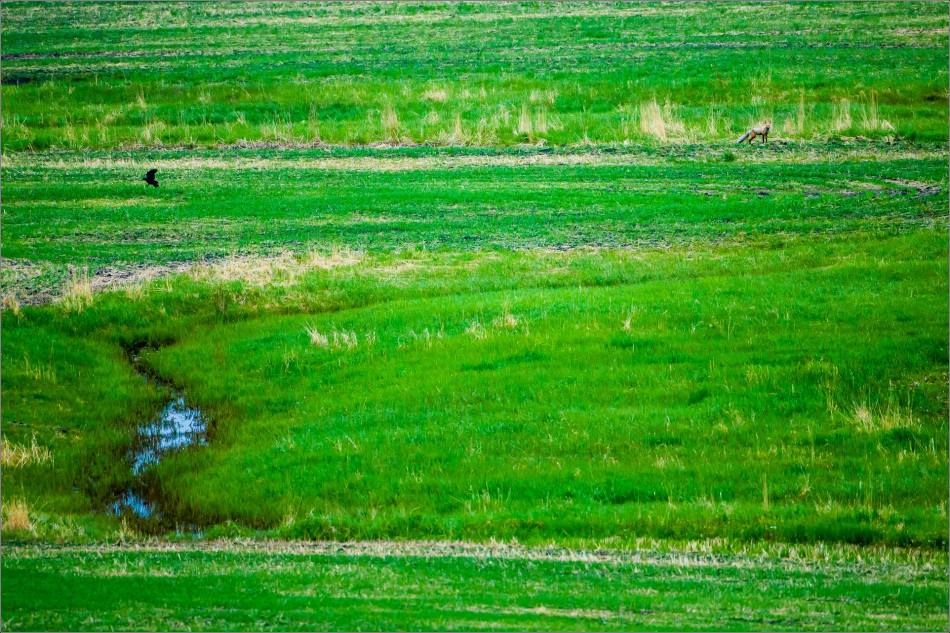 I’m running through my 2010 image library and pulling out a few favourites from the year.  In addition to wildlife, I will likely do a couple more themes.  Before diving into the new year, it’s fun to have a look back over the last one.

This year I found my photographic interests often moving towards people and landscapes with wildlife taking a backseat compared to other years.  That said, I still got out a fair bit and had some really great encounters with wild creatures on their terms.

I spotted this owl in West Bragg Creek as I was looking for moose.  It was in the middle of stalking some small creature under the snow and continued its hunt as I watched.  The advantage of longer lenses as I didn’t need to get very close to this beautiful bird so it was not disturbed.  Here is my original post.

On a drive along one of Bragg Creek’s back roads on Christmas morning, I found this moose.  He is one of three bulls that have been sparring over the last few weeks of December.  So far, I have not been able to photograph them while they are locking antlers but friends have told me all three get right into it pretty frequently.

I photographed this bull in a boggy field in Bragg Creek in early October.  He may be one of the three bulls but I haven’t been able to confirm a match with the photographs I have so far.  He was mildly curious about me but never lowered the ears so I felt relatively comfortable sharing the same meadow with him.  Here are some other photographs from that encounter.

This young bear walked out of the forest and around my house at about 7 am on a weekend.  It ran across the road and disappeared back into the woods.  I walked out to the path between my house and the river and waited figuring that the bear may nose around for a while but then decide to return to forest along the river.  It did but not before tearing into a neighbour’s garbage cans that had been left at the side of the house.  That’s how I spotted the bear again, I could hear the garbage cans and their contents banging around.  So, it got spooked, probably by golfers on the nearby tee-off and sauntered across the road back towards the river.  I was in a great spot to photograph him running across the grass and up into the forest.  Here is my original post with more shots of the bear.

These whitetail deer were wary but not overly concerned as I watched them move out of the deeper forest towards the road I was standing on.  Here we were watching each other and after a couple of minutes, I carried on down the road and they moved in the other direction along the fence line.

We were in Cabo San Lucas, Mexico in April and one of the joys of the trip was seeing brown pelicans.  They are numerous around the marina and shoreline in Cabo, considered pests by some.  Where we stayed, there were a number of birds which started their day at the beach arriving at first light and soaring off well before the heat of the day settled in.  I walked down to the water’s edge several mornings and enjoyed watching these giant birds start their day.  I had a great time photographing the pelicans and this one was no exception.  It strutted along the beach, stopping to preen, squawk with other pelicans and then glide over to another piece of beach.

Watching these birds and learning a bit about them made it very frustrating to see the damage they suffered in the Gulf of Mexico this summer.