On the rocks with a Brown Pelican

Brown Pelicans are frequent fliers just above the waves all around Los Cabos.  I love watching them glide and I had a special encounter one morning when we were staying near Cabo San Lucas in December.  Just before sunrise down on the beach near Punta Cabeza De Ballena, east of Cabo, when one landed on rocks near the shore close to me.  This pelican came in when it was still pretty dark but there was enough light to make the landing a good photo opportunity. 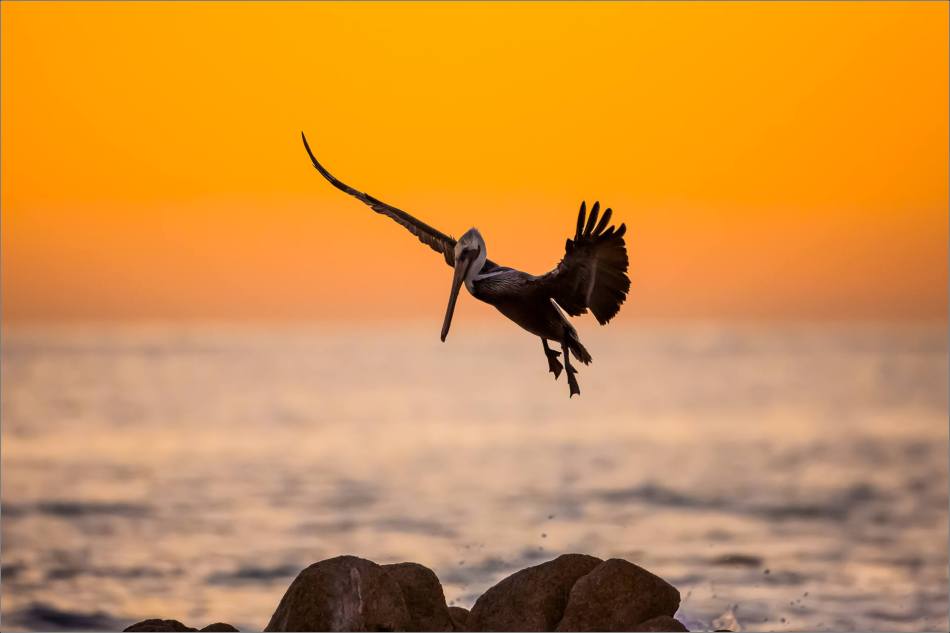 In the two images above, I brought out some detail by bringing up the shadows in post.  Below, I went the other way and deepened the shadows to create a solid silhouette of the pelican.

This fellow flew off before the sun came up.  I had hoped he would stay as the sun was at an angle where the sun would be backlighting the feathers which I thought would look beautiful. 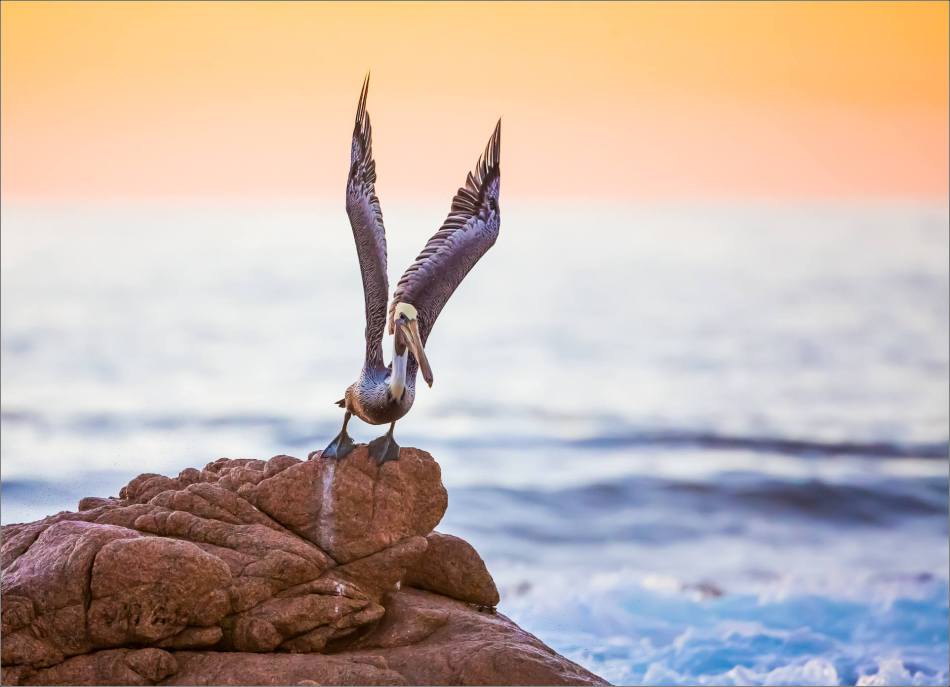 Even though he left a bit early for me, it was great when it flew close to the waves in between the rocks and the crests of the waves as it passed me by.

As the sun came up so too did the tide.  The waves were breaking around the rocks where the pelican had rested which looked beautiful.  I was really happy when another pelican came in and landed very close to the original one’s spot.  With the sun and sea spray, it was a great scene to photograph.  The first image in this set was from this point in the morning. 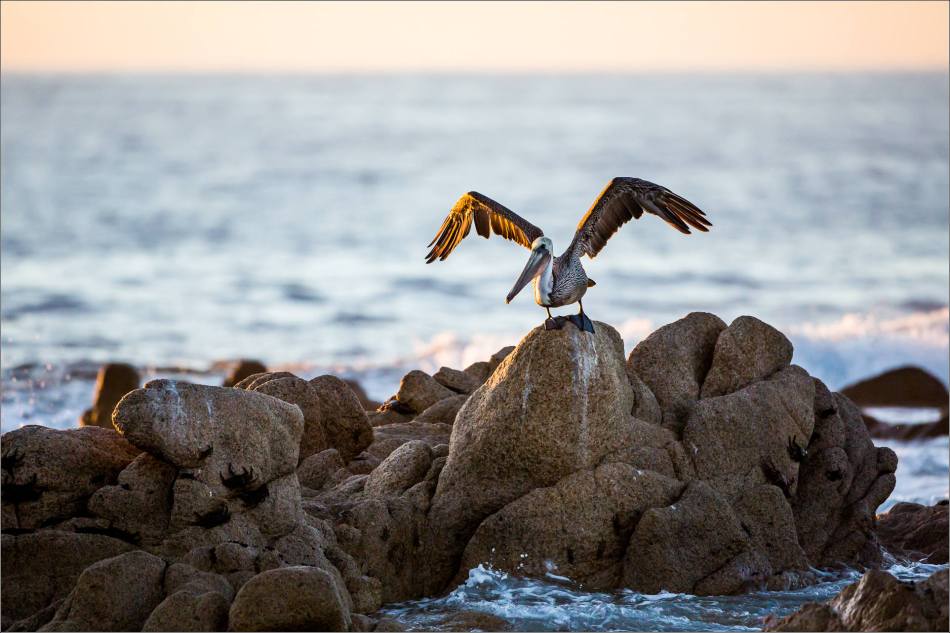 The second pelican stayed for a little while and then took off allowing for a nice launch photograph and then headed over the waves in the opposite direction from the first pelican.

The colors in the sky at dawn have been fantastic during our visit to Los Cabos this week.  The wildlife has been even more enjoyable.  Brown Pelicans (Pelecanus occidentalis) have been a favourite bird of mine to photograph since I first saw them here in Cabo san Lucas a couple of years ago.  On the prairies, we have White Pelicans (Pelecanus erythrorhynchos) that will hang out on larger ponds for the summer but for some reason they don’t cast the same spell on me that their multi-coloured cousins do.  I had a great encounter with a pair of pelicans a couple of mornings ago.  This image was of the first one maneuvering in to land on a half-submerged rock pile just before sunrise.  The other pelican joined a little while later.  Probably once I get home, I’ll have more to share from these two.

I’m running through my 2010 image library and pulling out a few favourites from the year.  In addition to wildlife, I will likely do a couple more themes.  Before diving into the new year, it’s fun to have a look back over the last one.

This year I found my photographic interests often moving towards people and landscapes with wildlife taking a backseat compared to other years.  That said, I still got out a fair bit and had some really great encounters with wild creatures on their terms.

I spotted this owl in West Bragg Creek as I was looking for moose.  It was in the middle of stalking some small creature under the snow and continued its hunt as I watched.  The advantage of longer lenses as I didn’t need to get very close to this beautiful bird so it was not disturbed.  Here is my original post.

On a drive along one of Bragg Creek’s back roads on Christmas morning, I found this moose.  He is one of three bulls that have been sparring over the last few weeks of December.  So far, I have not been able to photograph them while they are locking antlers but friends have told me all three get right into it pretty frequently.

I photographed this bull in a boggy field in Bragg Creek in early October.  He may be one of the three bulls but I haven’t been able to confirm a match with the photographs I have so far.  He was mildly curious about me but never lowered the ears so I felt relatively comfortable sharing the same meadow with him.  Here are some other photographs from that encounter.

This young bear walked out of the forest and around my house at about 7 am on a weekend.  It ran across the road and disappeared back into the woods.  I walked out to the path between my house and the river and waited figuring that the bear may nose around for a while but then decide to return to forest along the river.  It did but not before tearing into a neighbour’s garbage cans that had been left at the side of the house.  That’s how I spotted the bear again, I could hear the garbage cans and their contents banging around.  So, it got spooked, probably by golfers on the nearby tee-off and sauntered across the road back towards the river.  I was in a great spot to photograph him running across the grass and up into the forest.  Here is my original post with more shots of the bear.

These whitetail deer were wary but not overly concerned as I watched them move out of the deeper forest towards the road I was standing on.  Here we were watching each other and after a couple of minutes, I carried on down the road and they moved in the other direction along the fence line.

We were in Cabo San Lucas, Mexico in April and one of the joys of the trip was seeing brown pelicans.  They are numerous around the marina and shoreline in Cabo, considered pests by some.  Where we stayed, there were a number of birds which started their day at the beach arriving at first light and soaring off well before the heat of the day settled in.  I walked down to the water’s edge several mornings and enjoyed watching these giant birds start their day.  I had a great time photographing the pelicans and this one was no exception.  It strutted along the beach, stopping to preen, squawk with other pelicans and then glide over to another piece of beach.

Watching these birds and learning a bit about them made it very frustrating to see the damage they suffered in the Gulf of Mexico this summer. 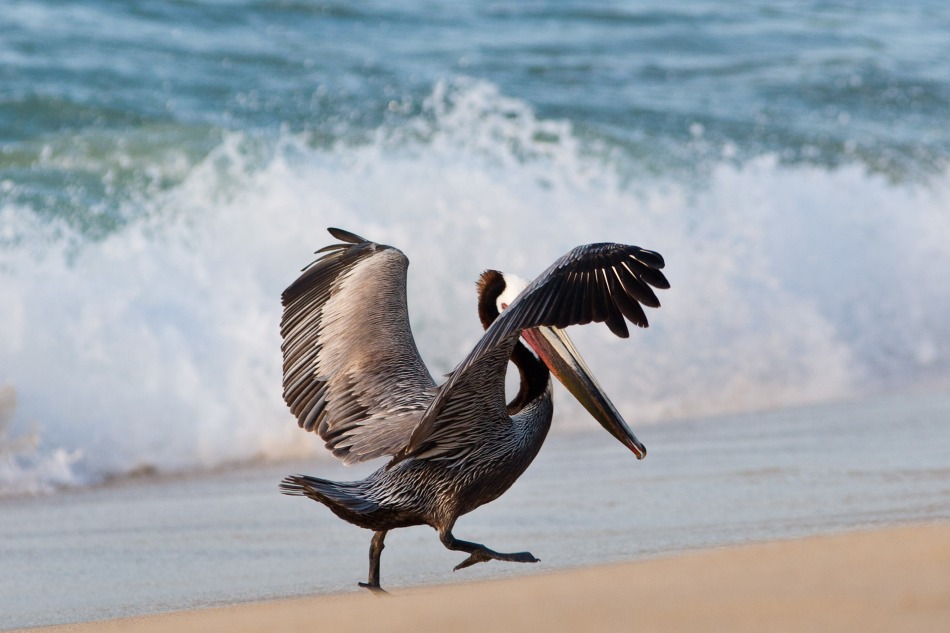