The start of summer lightning

We had a massive thunderstorm roll directly over our home last weekend.  A warm night met with heavy clouds with rain, wind and lightning all in large measures.  We have some incredible storms in the summer – this one felt like the first of those.  Here the forest in my backyard is silhouetted by lighting arcing across the clouds in the storm. 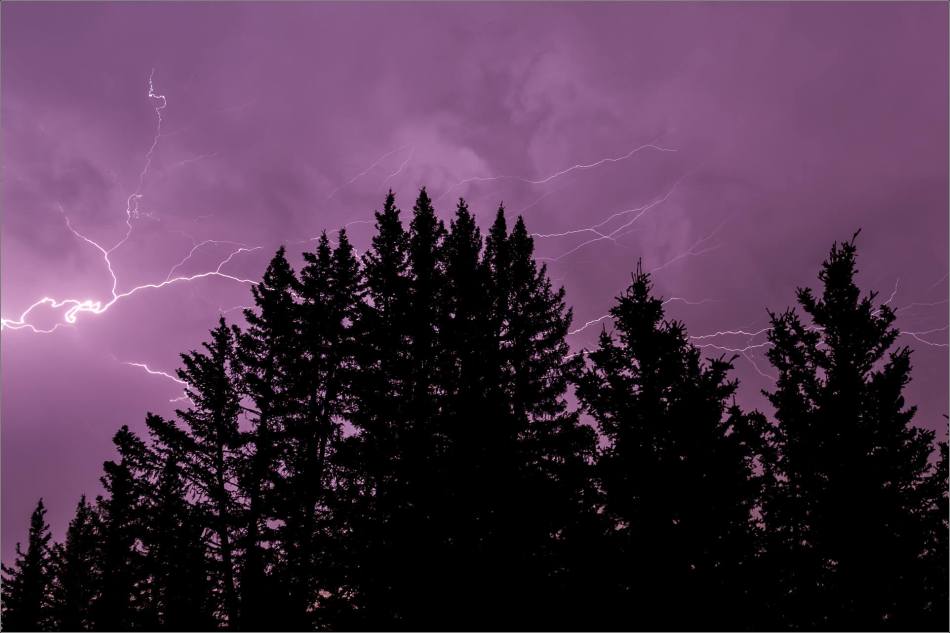 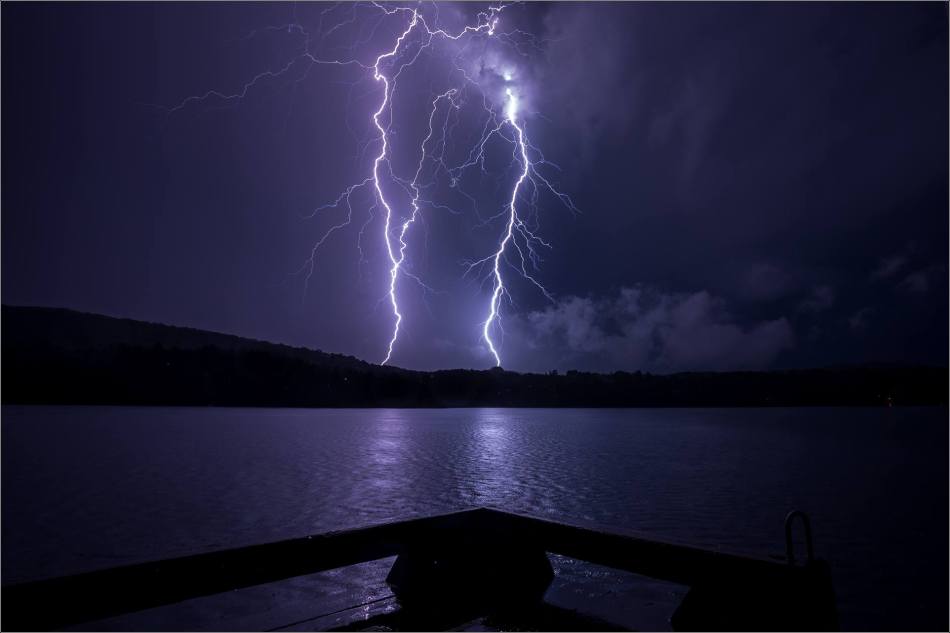 This lake is near Mont-Tremblant and has a lovely beach where my son and I swam the day before this heavy storm blew through the Laurentian Mountains. 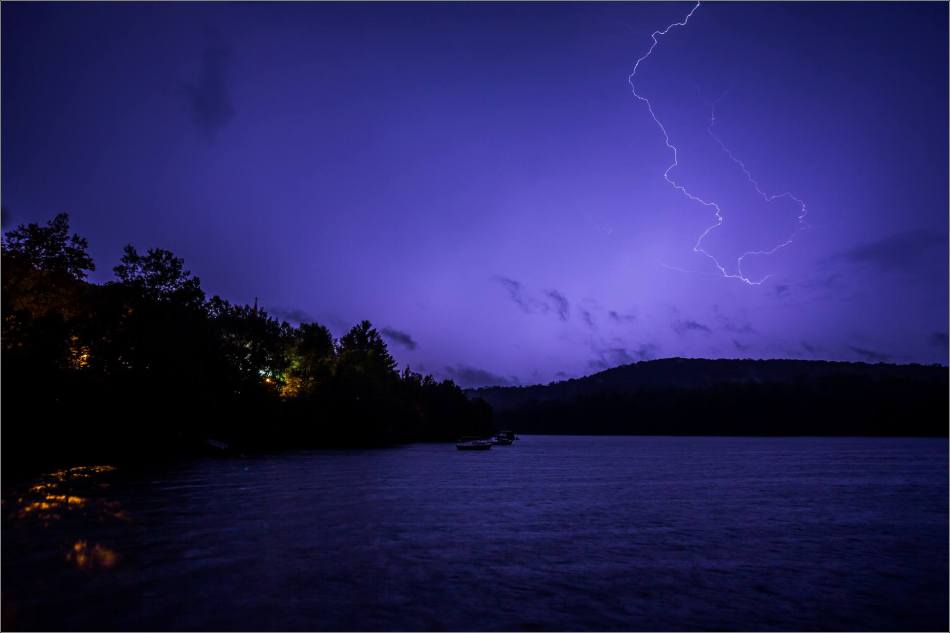 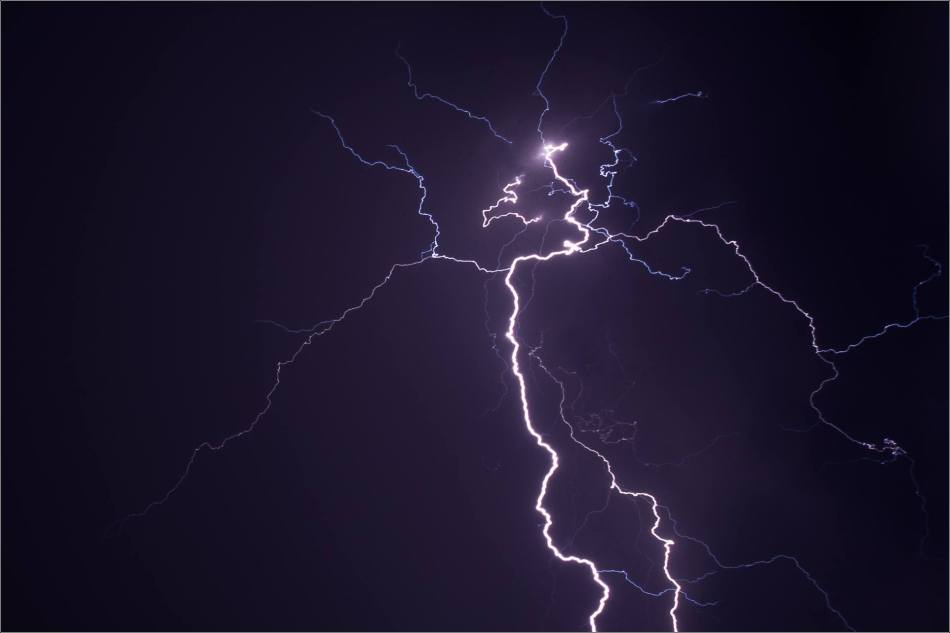 The lightning strikes came in sets, striking the hills across the water.  Beside the beach is a pier and a small covered area where I was able to hide from the rain.  That afforded a wonderful view of the lake and back towards the vibrant little town.  Of course, much of that view was illuminated only by the flashes of lightning – most along the hills across the water but a couple were over the community. 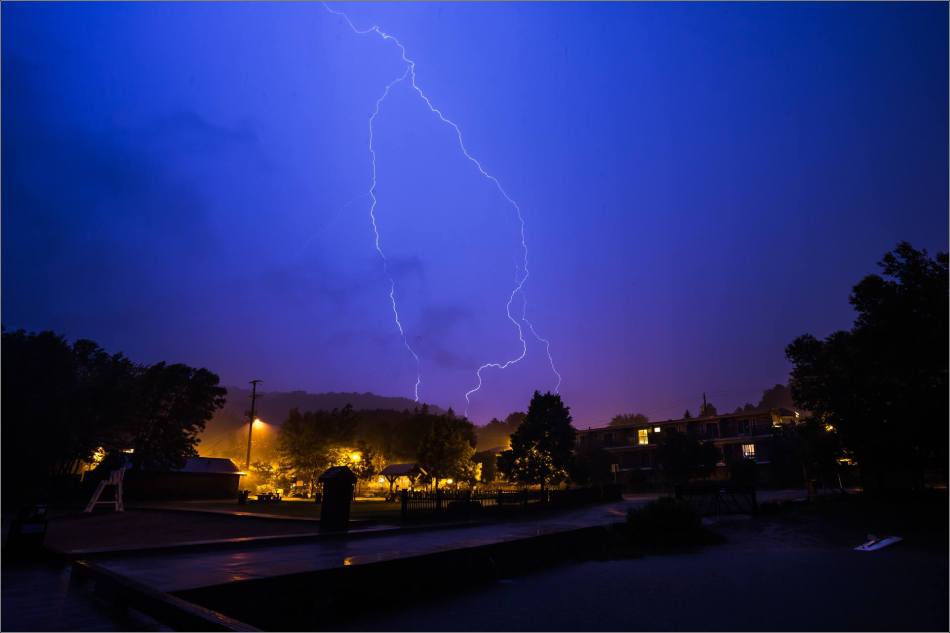 I felt the accompanying thunder from those deep in my chest.  Frequently, the wind ripped through the valley and drove the rain horizontally.  The temperature dropped fast when the storm approached and stayed cool through the evening.  I was glad for the rain gear I had stashed in my pack. 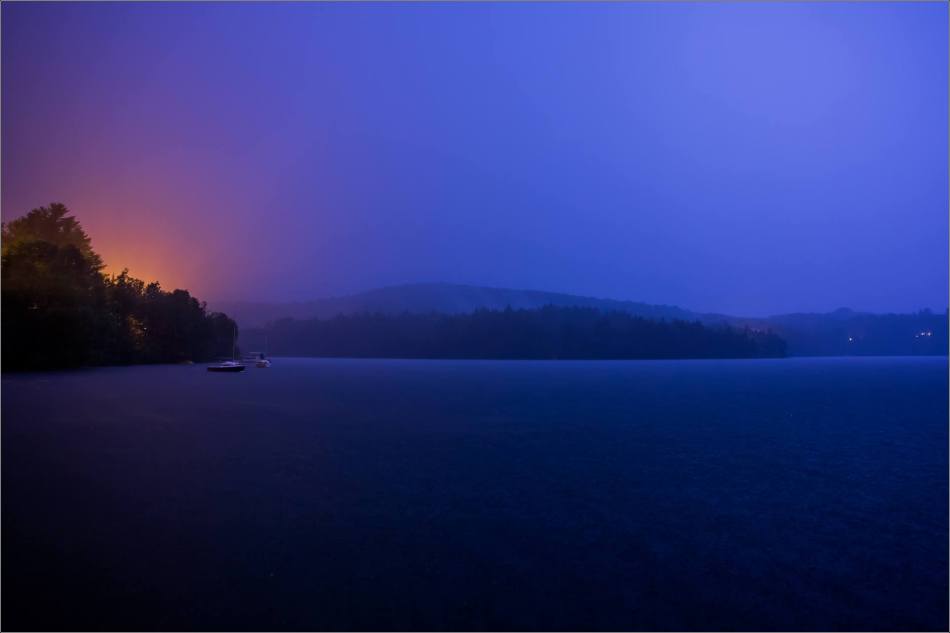 There were occasional stretches where everything calmed down, almost to catch a collective breath, but the storm crashed across the mountains relentlessly otherwise.  A proper summer storm by every measure.  After a couple of hours, the rain picked up even more and I thought it was well past time to get home. 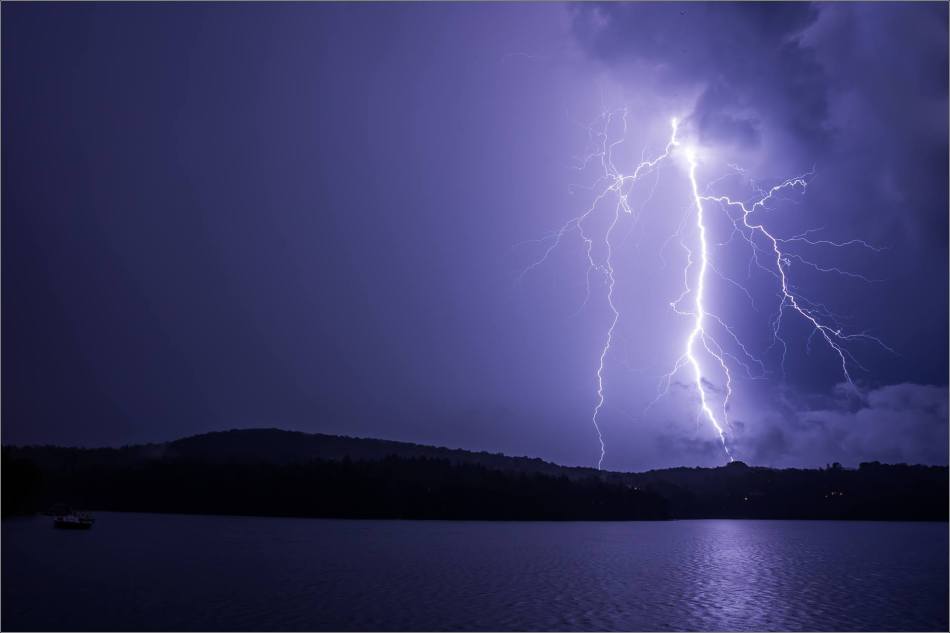 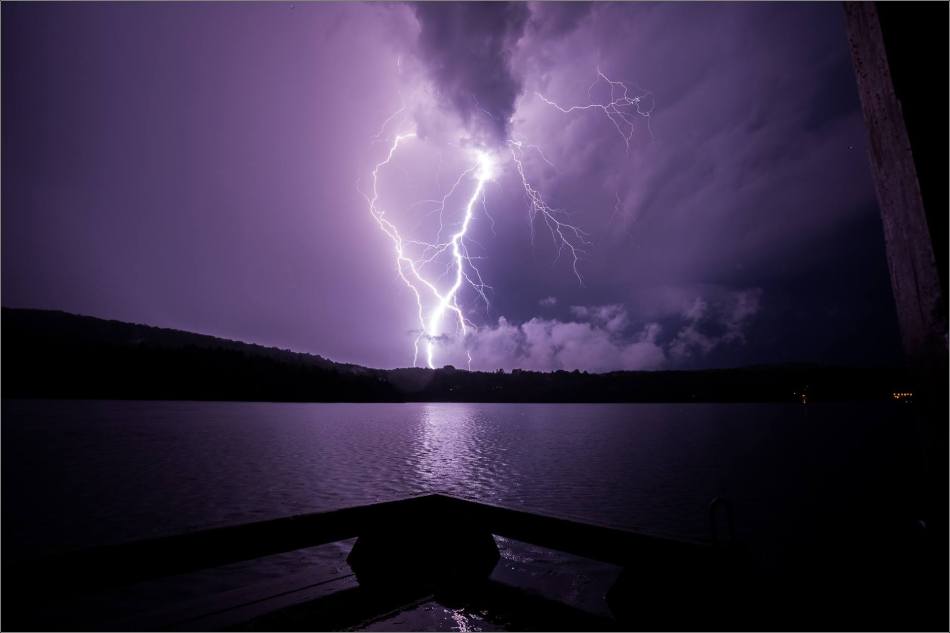 A fierce thunderstorm in the Mont-Tremblant area of the Laurentians in Québec last night. Steady sheets of lightning, howling wind and hammering rain accompanied the thunder that rang across the valleys for hours. This photograph was from Lac Mercier just after midnight. When this lightning cracked, it shook the gazebo I was standing under. I left a few minutes later – I’d had enough and the rain that followed shortly afterwards was of an almost biblical level. It was time to get home.  I will share a few more from the night soon but my son and I are off to Ottawa to visit Parliament Hill. 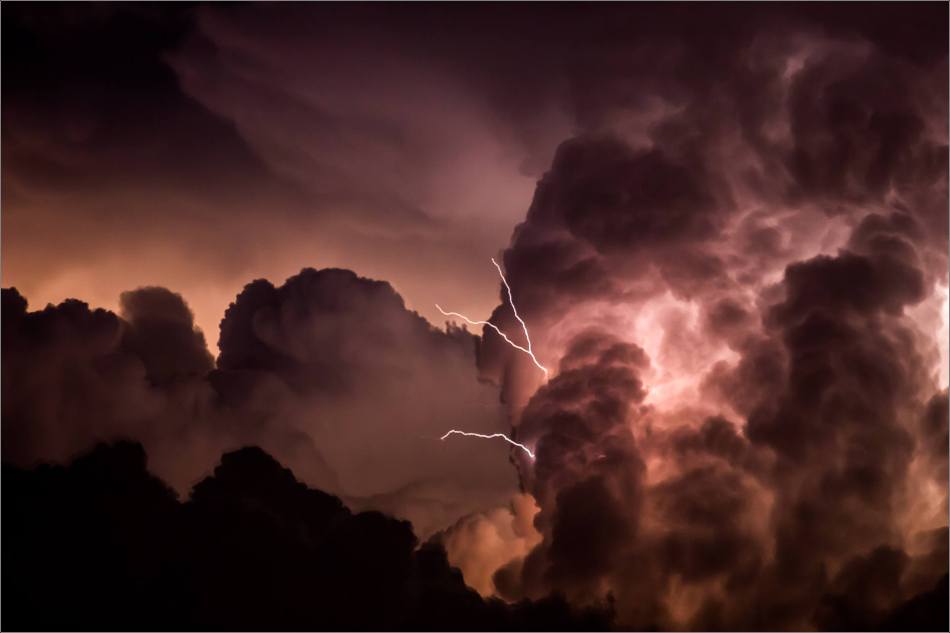 When my children and I decided to head out from Redwood Meadows to find a good vantage point to watch the lightning storm hanging over the Bow River between Cochrane and Calgary, we stopped when we got past the edge of the forest and could first see the storm itself. 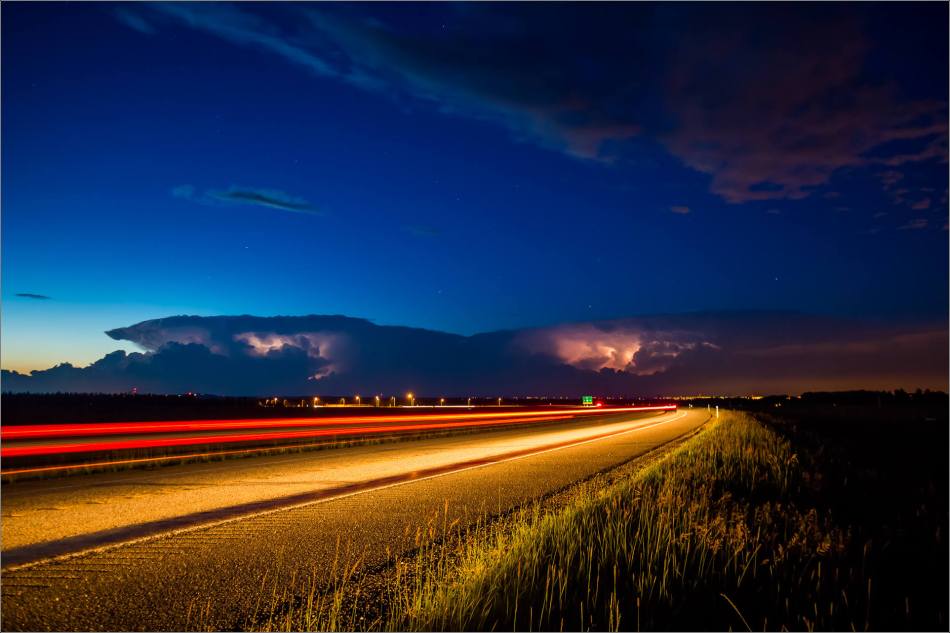 We found a spot 10 miles from the closest edge of the storm and watched the show which rippled and flashed in the massive clouds rising off the northern horizon. 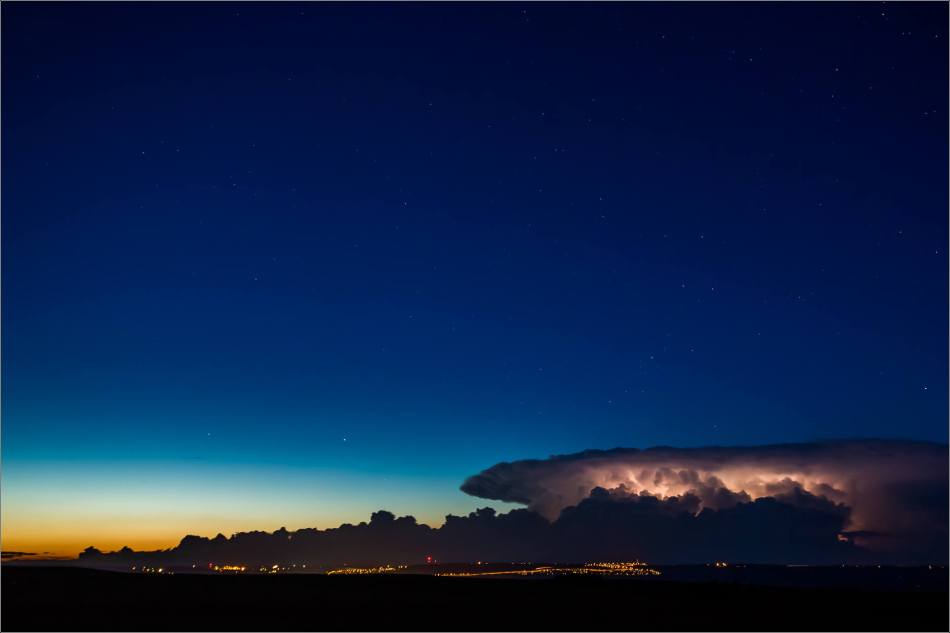 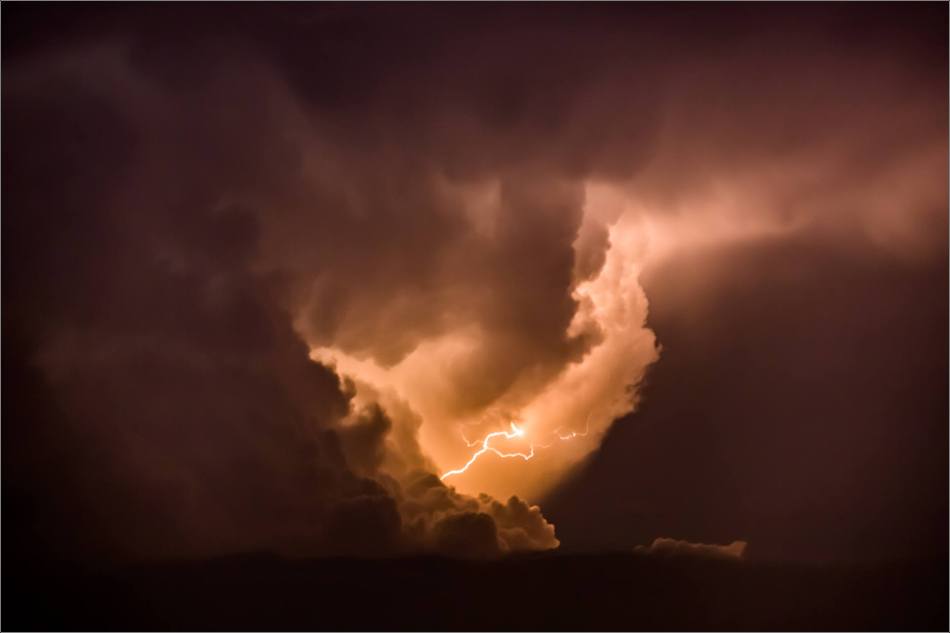 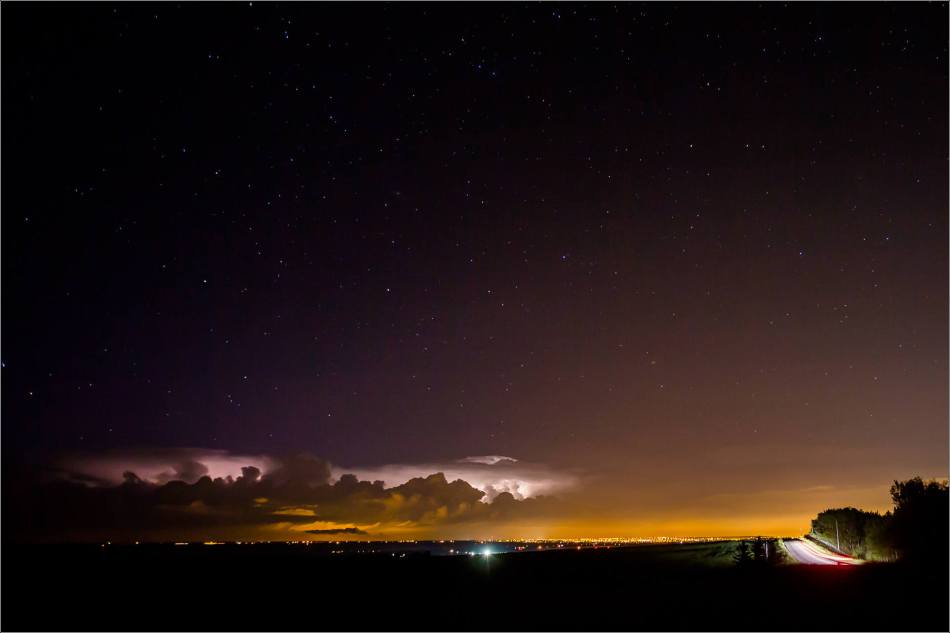 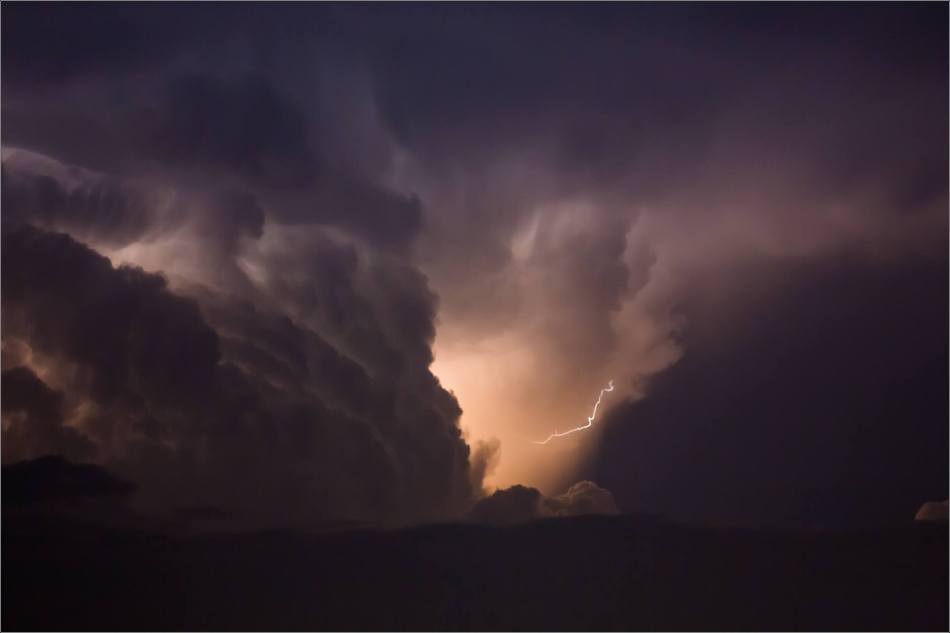 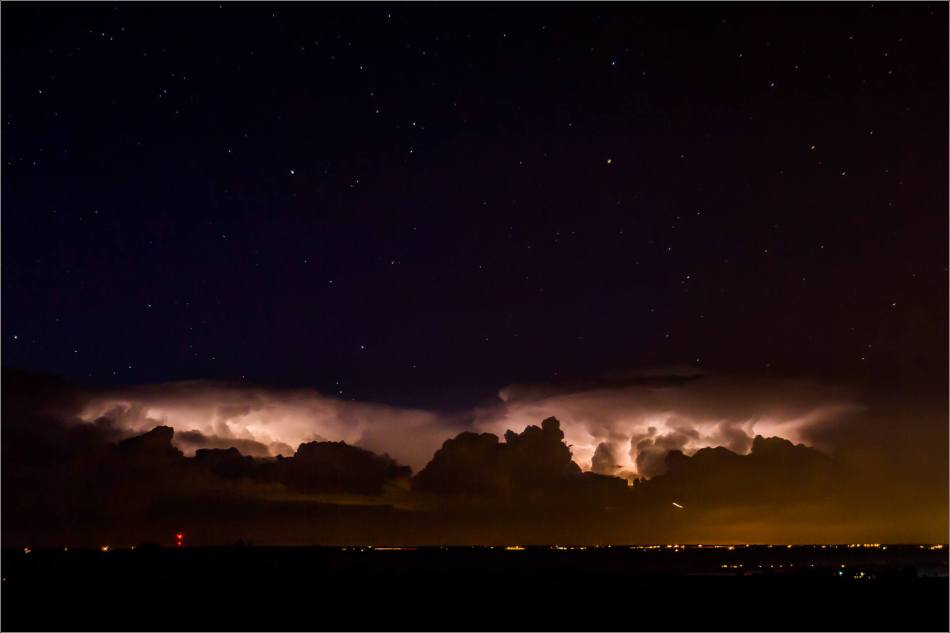 At one point while we were watching the lightning erupting at 3, 4 or 5 different places at once, my son said, “Baby Thor is having a temper tantrum”.  That seemed about right and apparently he has an enormous amount of energy because the lightning flashed and the bolts flew constantly for the two hours that I was there. 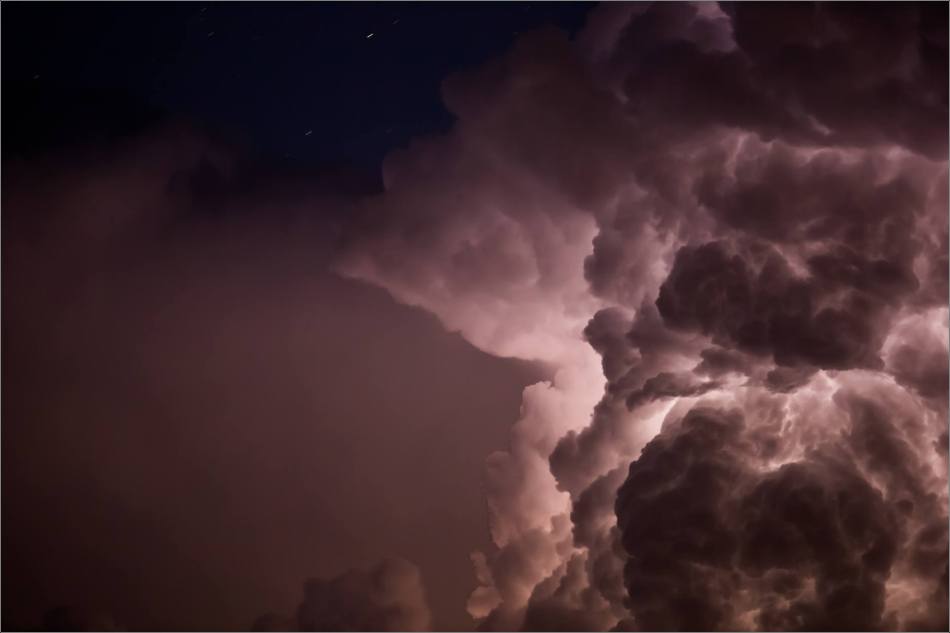 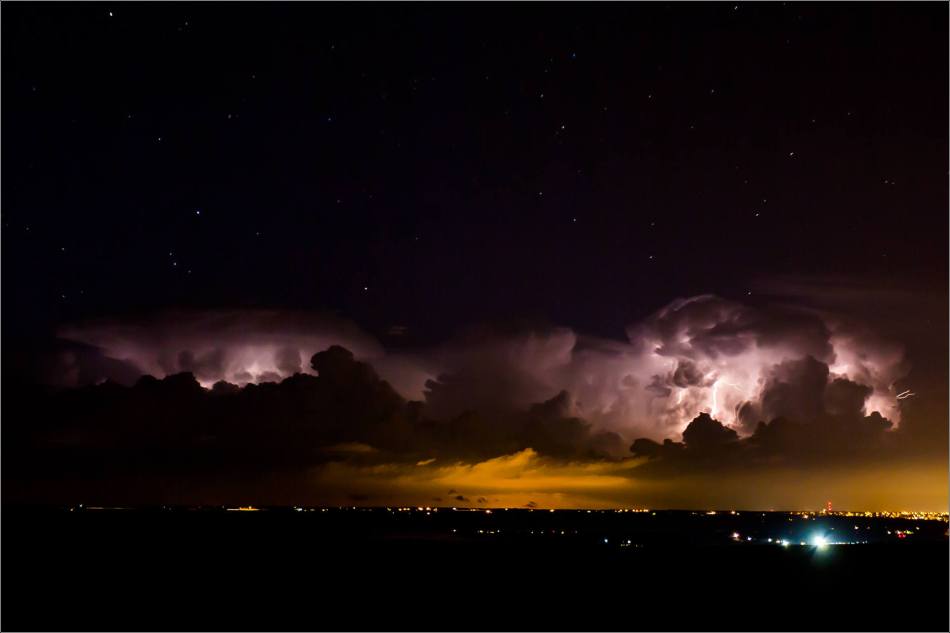 I re-worked the image that I first posted from the storm – cooling the white balance by almost 1000°K.  I really love how the lightning bolts crackle out of the cloud column. 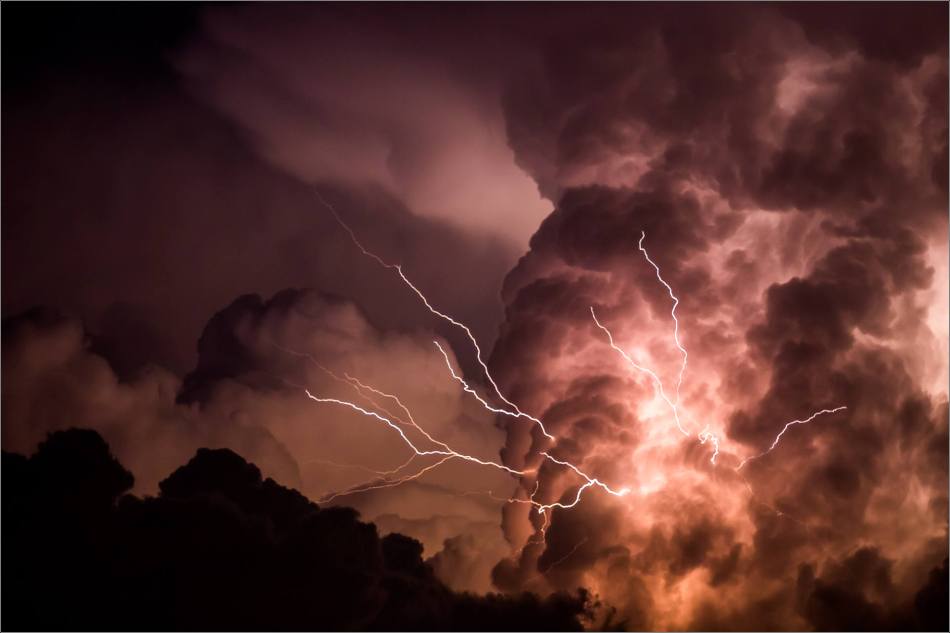 On the way back, I stopped by a pond where the western edge of the storm, still busy with sheet lightning, was reflected in its surface.  A beautiful final view of the storm before heading home. 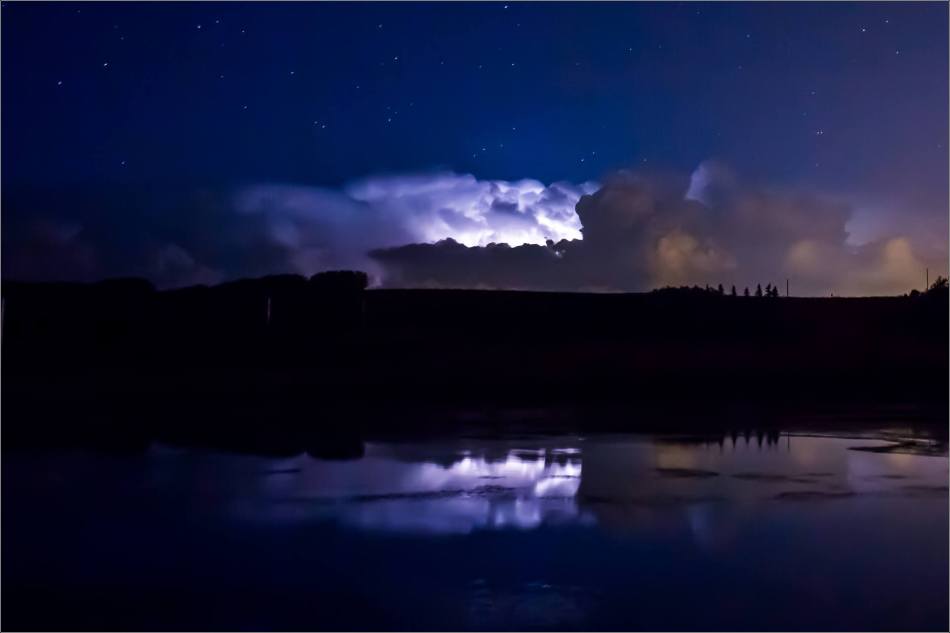 Lightning in the clouds over the Foothills

After the fireworks at Redwood Meadows last night, my children spotted lightning flashing to the east.  At that moment we voted to become storm chasers and we headed towards the prairies to see what the storm was all about.   It turned out to be far beyond my expectations! 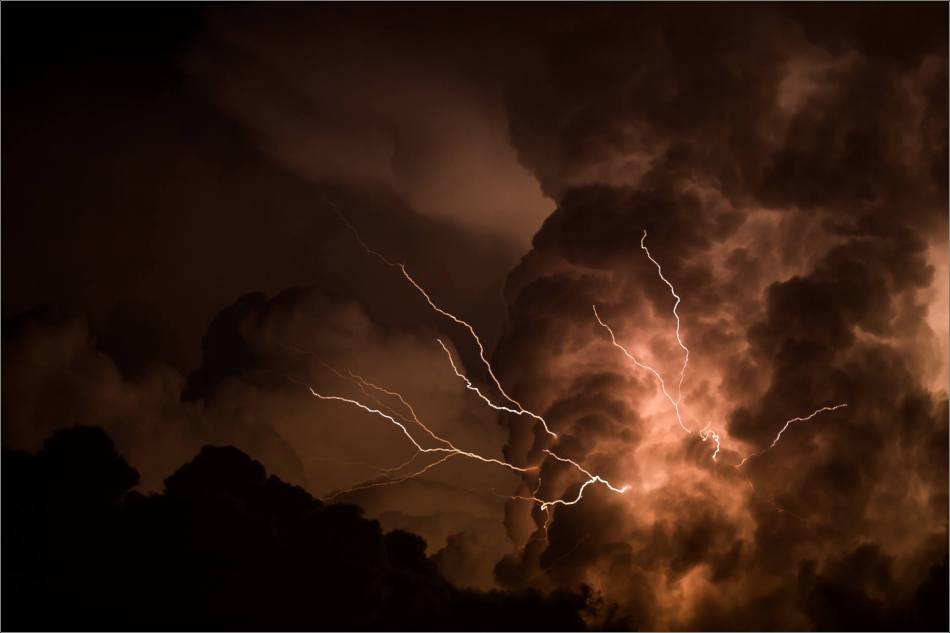 This storm was hanging over the northern ridge above the Bow River and stretched from Cochrane to Calgary.  The size was impressive, but the electrical activity was truly spectacular.  The lightning flashed throughout the peaks and valleys of the clouds constantly for the entire two hours that we watched from a high spot near the Springbank Airport.  I will share more images from the night soon but when I saw this one, taken with my telephoto lens aimed at one spot that had been flashing steadily, I was excited to get a quick post out!

A very energetic storm rolled out of the mountains and spread across the prairies last night.  Bobbi was driving home as the clouds thickened and the lightning began to streak across the sky.  At her urging, I went out to photograph the light show and it was spectacular.  The summer heat seemed to have loosened up Zeus’s arm and he was firing bolts down to the ground and between clouds for a couple of hours. 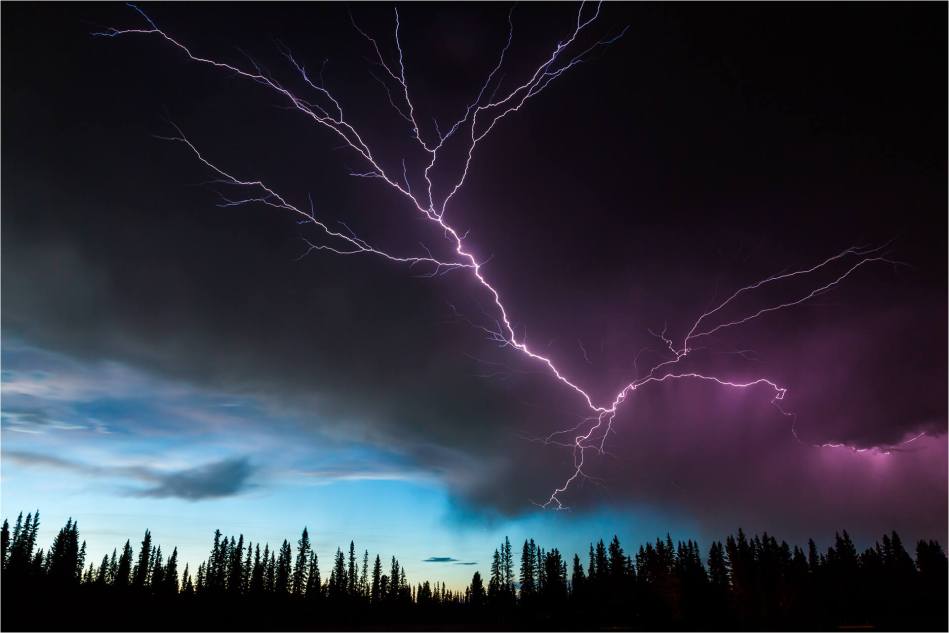 This image was taken at the sports field in Redwood Meadows just a little ways from my house.  The clouds were running east along the south side of the Elbow River.  To the north, the sky was clear which presented an interesting background to lightning.  Following a few minutes set up by the field, I went out onto the prairies after this image and had a great (although late) night storm watching. 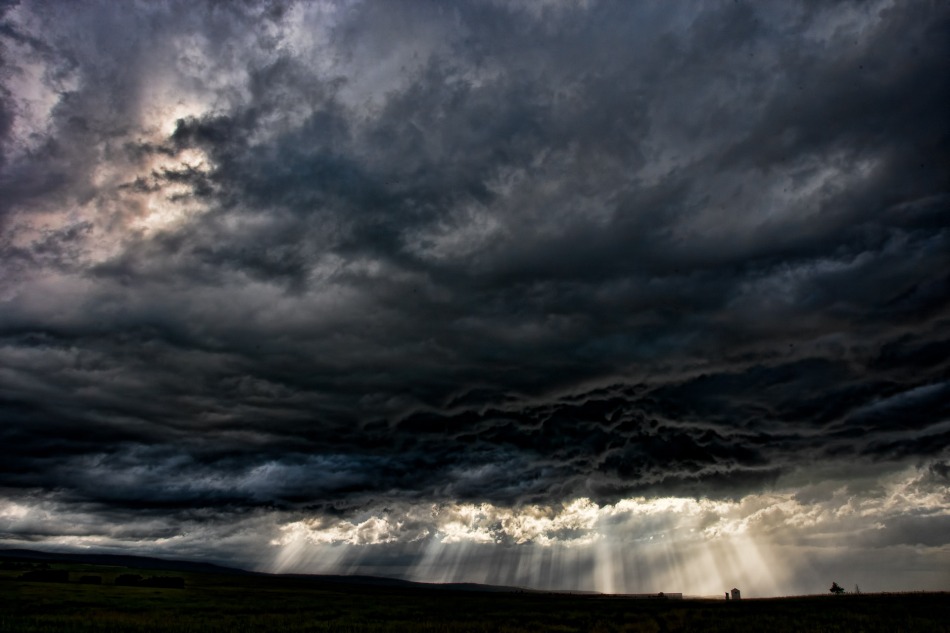 This location, just west of Calgary, is one of my favourite places to photograph during the winter months when the sun sets behind the southern edge of the Canadian Rockies.  Last night, a massive storm broke free of the mountains and stretched across the prairie.  There were some great holes in the clouds that allowed sunlight to streak through here and there.  A very dramatic scene to work with and create images of. 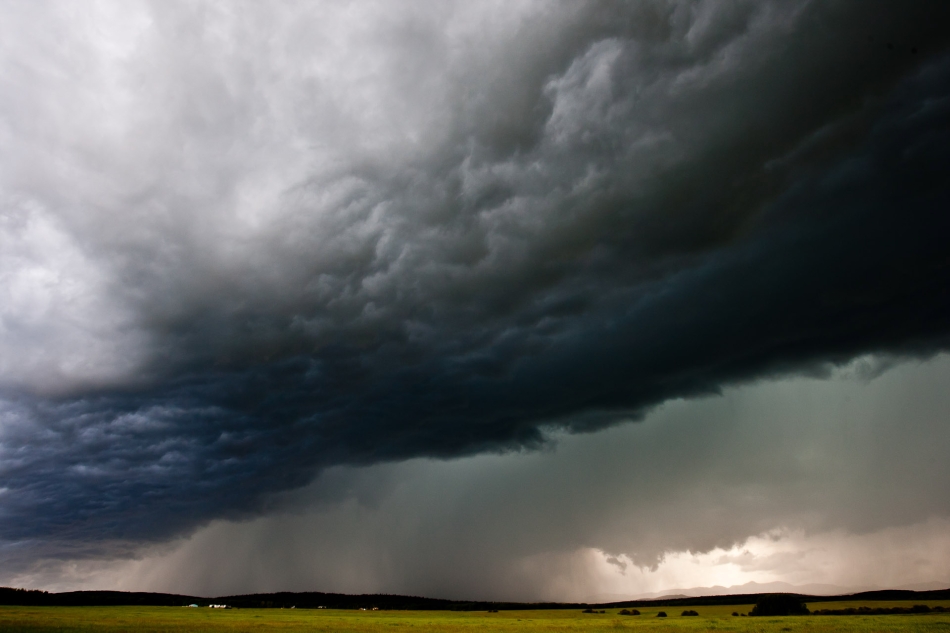 Behind the ominous forerunning clouds came the heavy rain.  Here the rain is hammering Bragg Creek and moving quickly onto the fields. 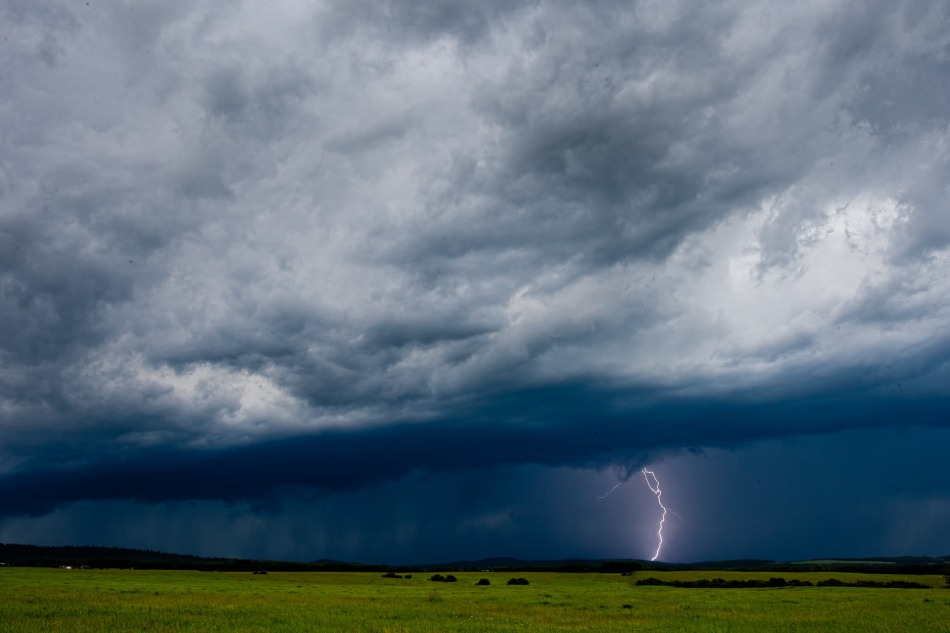 As the storm’s intensity built, lightning seemed inevitable and I was lucky to catch this strike hitting along the Elbow River behind a hill in Redwood Meadows. 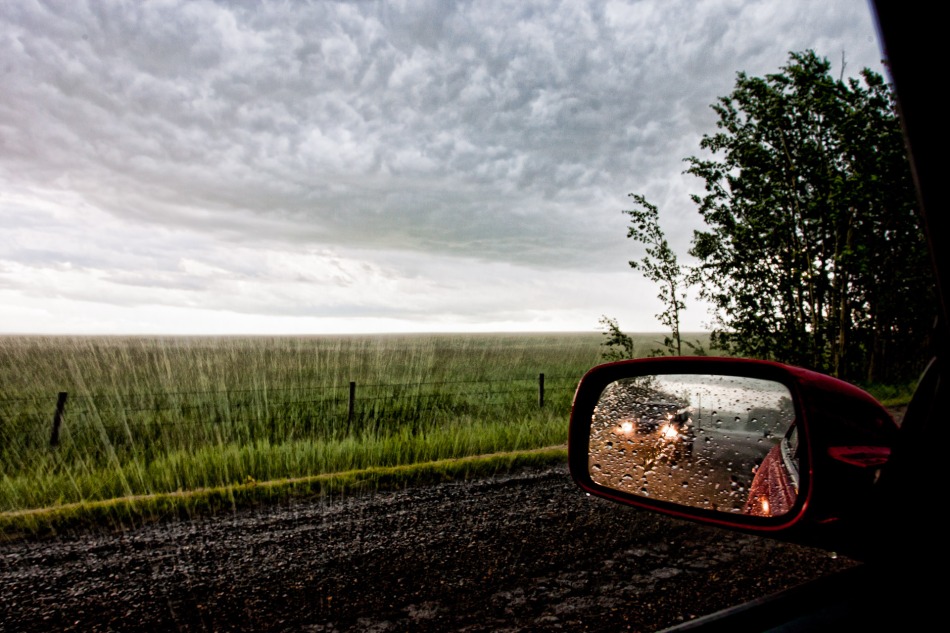 When the rain did arrive where I was photographing, cover in the car was the prudent option.  It was no exaggeration to say this was a torrential downpour.