Lightning over an abstracted Osoyoos

We went to the Okanagan earlier in the summer for a couple of days. One evening brought dark clouds in with the fading daylight. The low roll of thunder to the south announced the lighting storm that came in sincerely around midnight. Desirée and I photographed through the rain as the storm crossed directly overhead. A gazebo on the lakeshore provided cover. It was an impressive summer storm. This was one of the interesting shots from the night’s shooting.

One of my drives home earlier this week was made more exciting by a massive thundercloud just south of Highway 8.  I stopped near the Rockyview Fire Department in Elbow Valley and photographed as it rumbled past.  There were a few lightning strikes that I managed to capture but I was paying more attention to the angry beast.

It was dark, dark grey in the center, the edges were rolling fast and the temperature plunged by 10°C or more just before the rain began to fall.  I scurried back into my car once the volume raised up to a downpour.  Back on the road, I wondered how the storm would develop as it moved eastward.  The next morning, I learned that it contributed to the flooding and heavy hail that beat up Chestermere.  That was one of the mean summer storms we get in the Calgary area and I am sorry to hear about the damage it caused.

Pele is one of the Hawaiian deities and is often associated with the volcanic activities on the islands.  She also holds dominion over lightning, wind and fire.  One evening, I watched her play with lightning, throwing it over the ridges that rise up from the Hanalei Valley on Kaua’i’s north shore.  For almost three hours, beginning at dusk, the clouds lit up with strikes that branched across the sky. 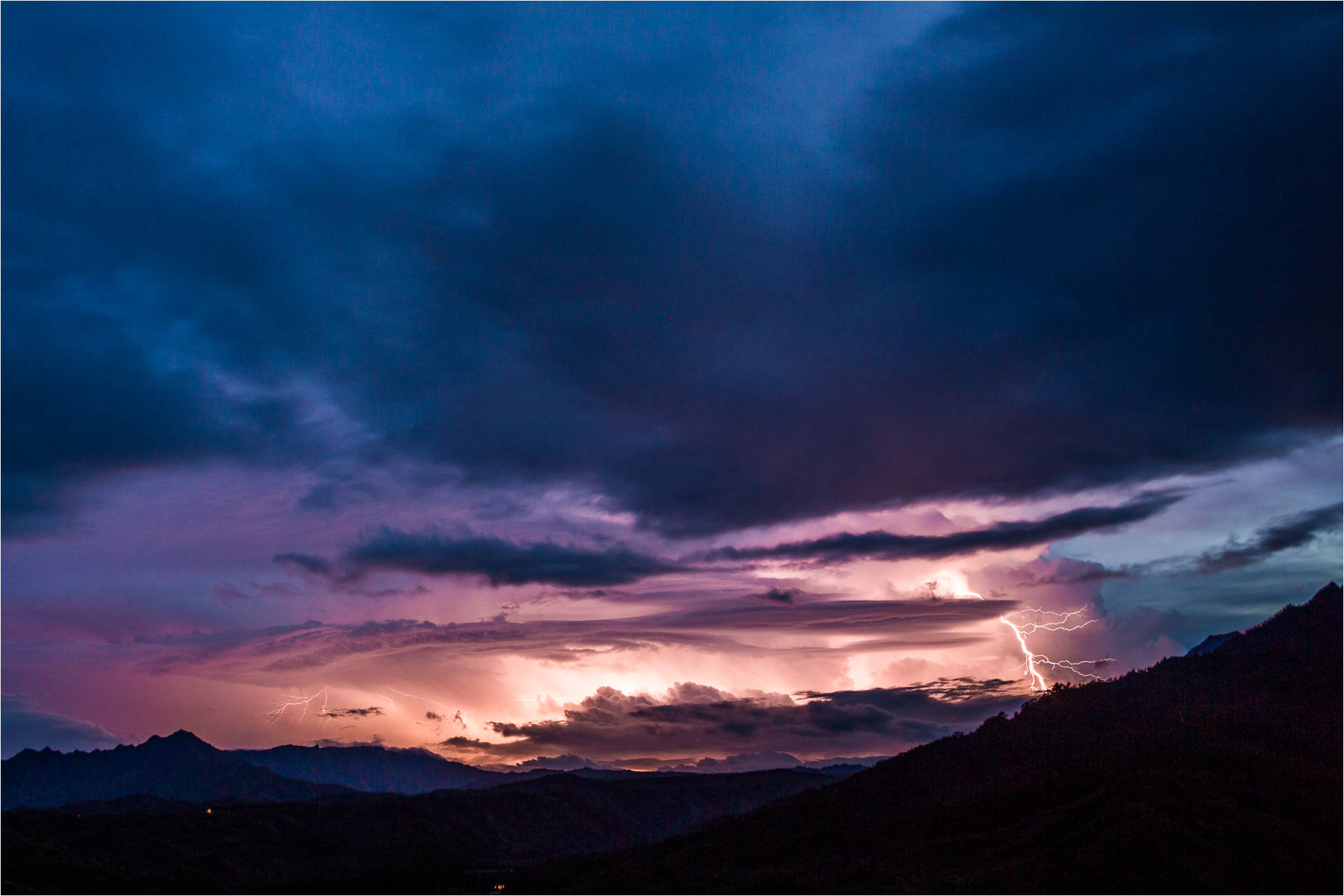 I watched the storm from the Hanalei outlook in Princeville.  That put me at almost the same elevation as the strikes which hammered the far side of the valley.  With each flash, the taro field ponds lit up as well.  The deep blue sky early in the evening tempered the color in the sky.  When the valley was totally dark, each flash illuminated the scene in wild shades of purple.  It was incredible to see the changes in the color, the clouds and the storm through the night.

Pele became more ferocious as the night deepened.  Gradual at first, with the wind picking up slowly but steadily and the lightning coming every couple of minutes.  Then increasing quickly along with drops of rain that turned into a downpour after just a few minutes.  I retreated to shelter with the rain drenching me and the lightning tracing arcs directly above me.  It was raw power and I enjoyed watching the goddess at work – by the end there was a determined nature to the storm that made it feel like play had been joined by purpose.