Last June I traveled to Radium with my children.  On our travels there we passed through the Kootenay National Park during an early summer snow storm.  We stopped along the Kootenay River to photograph the icy blue water and bright green of the young forest being met by the white blizzard. 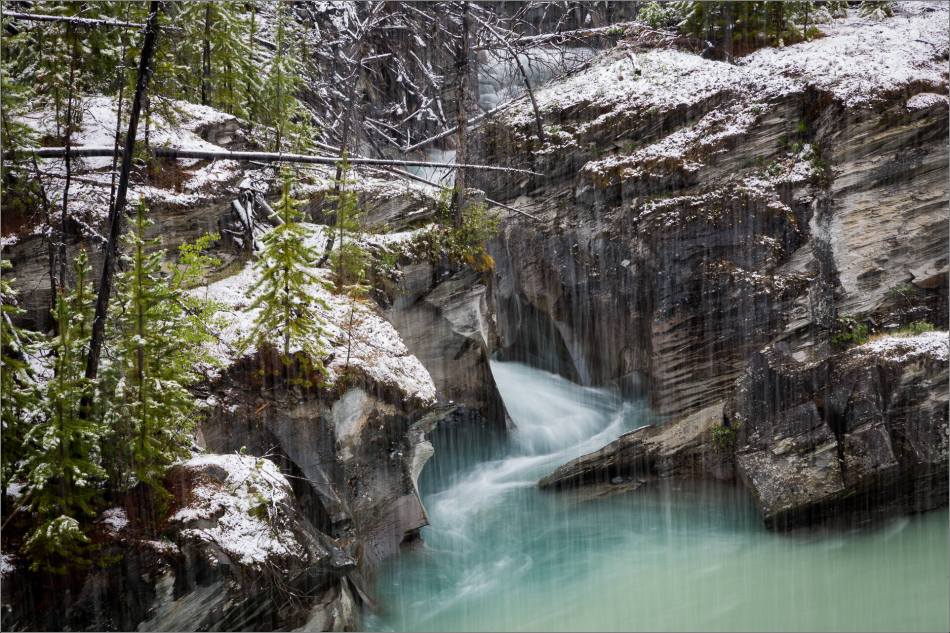 My family spent a few days in Radium at the end of March.  I had not been that way since last fall.  Driving through the Sinclair Canyon’s narrow opening into the Columbia Valley this time, the steep rock walls grabbed my attention. 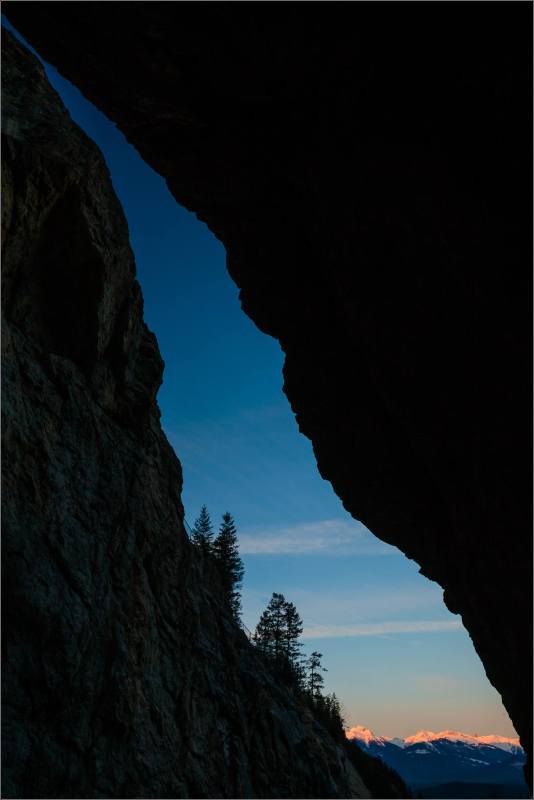 I went there early on three of the four mornings to play with those solid forms.  Lights from passing traffic traced bright lines through the long exposures.

The last morning was the earliest I arrived – a little after 4am.  I had some ideas for images with star trails through the gap in the canyon.  The clouds were not supportive of those ideas.  I watched them knit together and block the night sky as I was setting up.  Those ideas will get another chance later this spring I think. 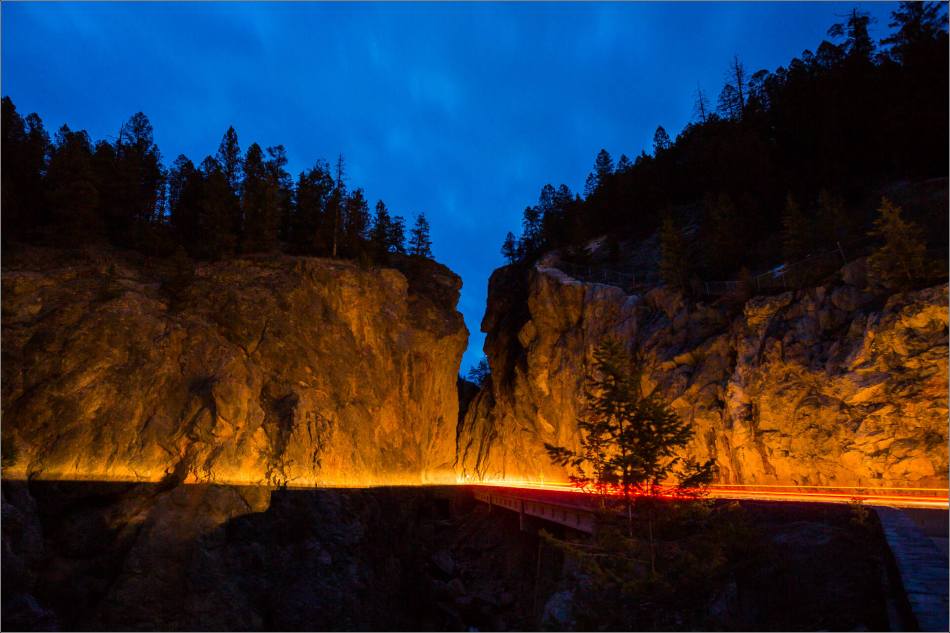 After hiking along the Boom Lake trail last weekend, I drove into the Kootenay National Park for a little ways.  I stopped when I noticed the snow blowing off of the peaks along the Ball Range that is a line of mountains along the Continental Divide.  Looking up from the British Columbia – Alberta border on Highway 93, the snow was backlit by the sun which had still not risen above the wall created by Storm Mountain, Beatrice Peak and Stanley Peak. 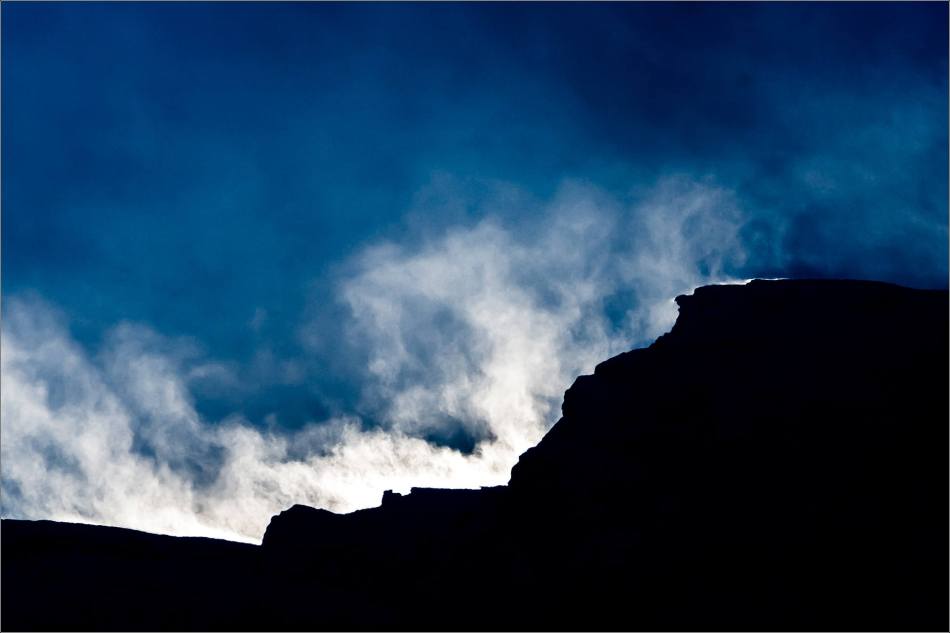 Wind pushed veils of cloud up the valley obscuring the ridgeline for seconds or minutes.  When the view was clear, it presented a constantly changing scene as the snow lifted into the air.

A quick look back from a bear

Driving up to the Highwood Pass in Kananaskis this black bear ran across the road a few hundred yards ahead of me.  I pulled up where it had climbed the bank and saw it looking at me from the forest’s edge.  A quick look and then it ran into the woods.

That reminded me of a slightly longer encounter I had in the spring near Radium with another black bear.  The dandelions that spring up in thick carpets on the roadside fields draw the bears and this one was not deterred by a steady downpour.

The wet fur provided a great sheen and defined the coat well.

On the same trip through the Kootenay National Park in early June, I saw a second black bear grazing in another meadow.  This one was a beautiful ginger colour – really beautiful.  I’m hoping to get back into the mountains to enjoy the autumn season and see a bear or two soon.

Kootenay Landscape: Along the Vermilion River

Bobbi and I drove with the kids up to Lake Louise for a hike on Sunday.  The walk around the north side of the lake was nice and the kids had a lot of fun. Not much time to photograph, too busy throwing rocks in the water with Kian and Kezia, but there was some interesting light on the mountainsides when I did stop for a minute.

On the drive back we went on a detour along Highway 93 into the Kootenay National Park.  We turned around before Vermilion Crossing at the point where Floe Creek joins the Vermilion River which runs down the spine of the valley.  Kootenay National Park has had several large forest fires in the past 40 years and there are huge stretches of matchstick trees.  Under these ravaged trunks, evergreens have taken hold and bring color into the hillsides.  In the rivers, glacial silt paints the water a lovely blue.  Strong lines in the river’s canyon walls and in the burned out forest.  A lot of great elements to choose from and work with.

Here are a few images from this bend in the river. 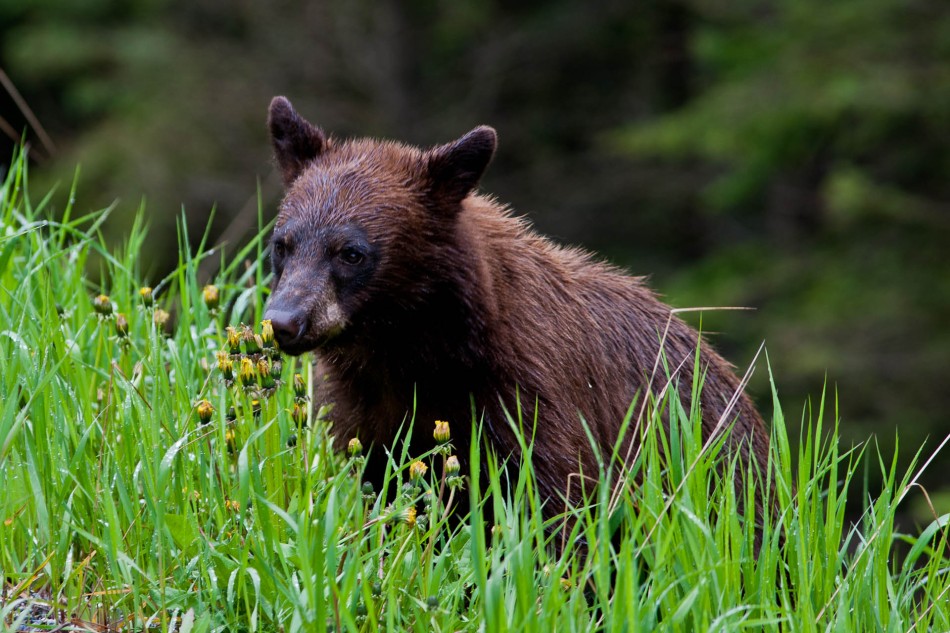