A Grizzly Boar’s Breakfast in the Khutzeymateen 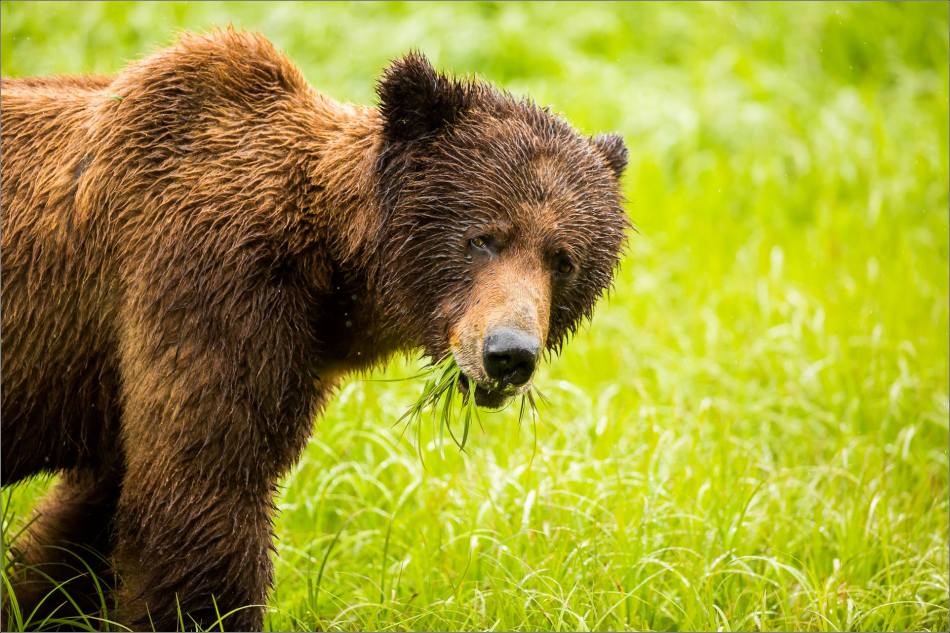 When the Grizzly Bears wake up from their hibernation in the mountains above the Khutzeymateen Inlet, the sedge grass is waiting for them.  When Bobbi and I were there in June breakfast, lunch and dinner for them finds sedge on the menu.   On this cold, wet morning this boar was one of several bears spaced out along the banks of the estuary at low tide mowing away.  The volume, of grass eaten and sound created, were both very impressive.

A Banff Grizzly on the move

I spent one morning in Banff on the weekend and came across a male Grizzly Bear (Ursus arctos horribilis) along the Bow Valley Parkway.  He spent some time in one roadside meadow chewing on a everything green he could see. 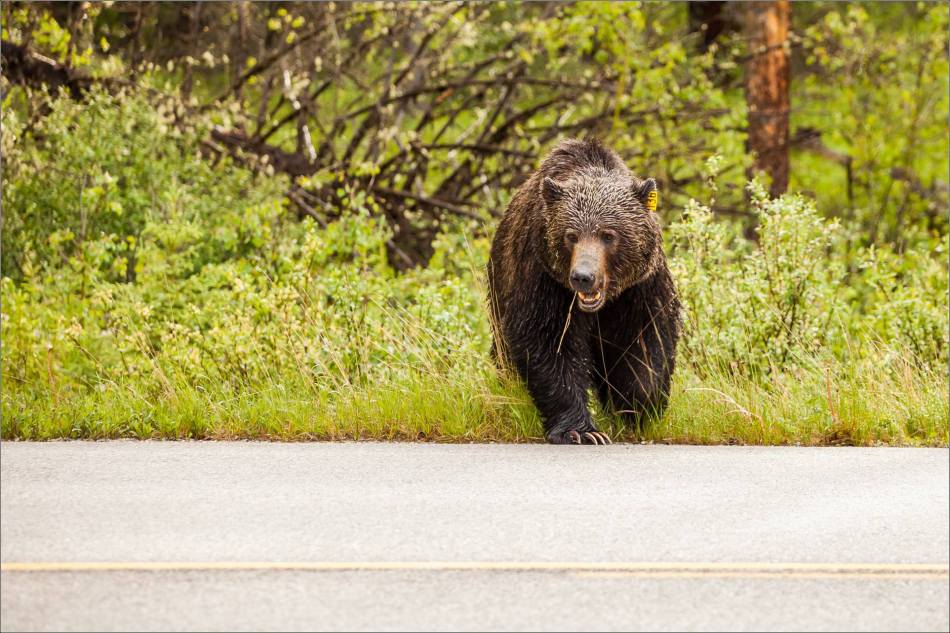 Before long, he crossed the road and then headed into the trees leaving a group of vehicles and their occupants behind.  I hoped he was heading towards a larger meadow about a mile east and drove there to wait and see.

Apparently the dandelions and lush vegetation were calling him and after not too long a wait he strode out of the forest and continued chowing down.  He stayed there for more than an hour, disappearing briefly a couple of times before finally heading deeper into the shadows.

Although winter felt slow to leave, the greenery now seems abundant and makes me hopeful this bear and the other animals in the park will enjoy a long summer feast.

Strolling in the Khutzeymateen 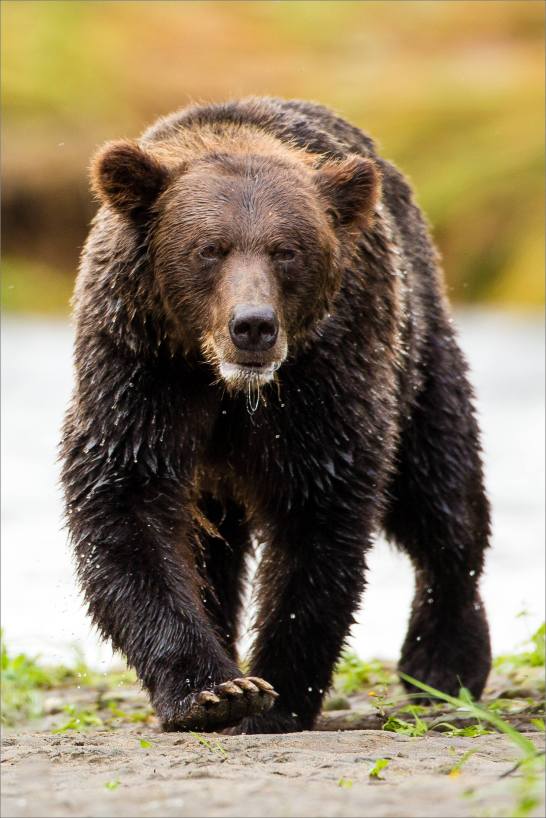 After having photographed the Grizzly bear named Blondie on the first day in the Khutzeymateen, we met up with her again on two separate occasions.  Here she was at the mouth of the main river in the estuary.  She had been in the water just before and the droplets were still shaking loose as she stepped across the sand.  She noticed us right away but showed little interest and kept on her hunt for fish.

She had swum around the grassy sandbar we were moored beside and carried on around another bend a few minutes later.

A Grizzly on the move 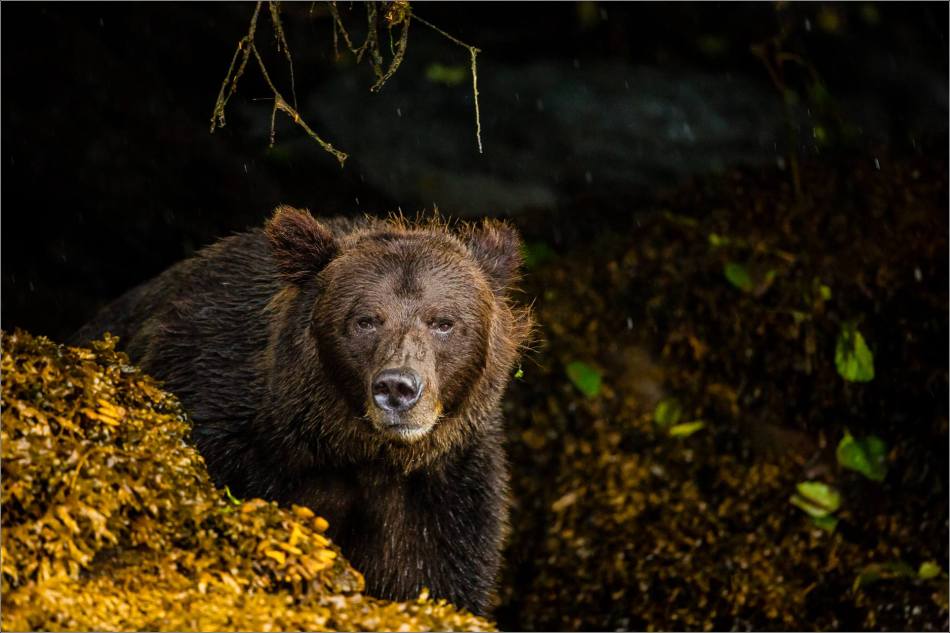 After flying into the Khutzeymateen Provincial Park by float plane in the early afternoon, we moved all of our gear onto the Sun Chaser which was our base of operations for the four days spent in the inlet.  The captain, Dan Wakeman, sailed us east towards the end of the inlet for a couple of miles and then weighed anchor in a beautiful little cove.  We set up for shooting and hopped into Dan’s inflatable zodiac boat to look for bears.  Earlier we had passed a river and watched a dark coloured Grizzly slip into the shadows of the rainforest.  Now on a more mobile vessel, with shallow draft and a strong outboard, we headed back and went upriver about one hundred metres to see if the bear had lingered in the area.  It did not reappear and we soon headed down to the estuary and the main river flowing out of the mountains there.  We waited and watched but found no bears on that first visit to the head of the valley.  I didn’t mind, the scenery was beautiful and I enjoyed building a familiarity with the land.  Dan has spent the non-winter months of each of the last 35 years in the Khutzeymateen and it was a great to soak up some of the knowledge he freely shared as we trolled around and watched for wildlife.  We headed back to the Sun Chaser and spotted a female Grizzly who was picking dead salmon out of the sedge grass.  They get caught in there during the high tide when the meadows are covered and having spawned do not have the energy to untangle themselves.

With the Grizzly finishing off a fish, Dan introduced her as Blondie.  As I mentioned in an earlier post, she had been blonde as a cub and a few long tufts of hair behind her ears had stayed with her into adulthood.  She hunted in the grass for a bit longer and then went fishing in the river.  She splashed around a bit but pretty quickly headed to the grassy field on the far side and resumed looking for salmon there. 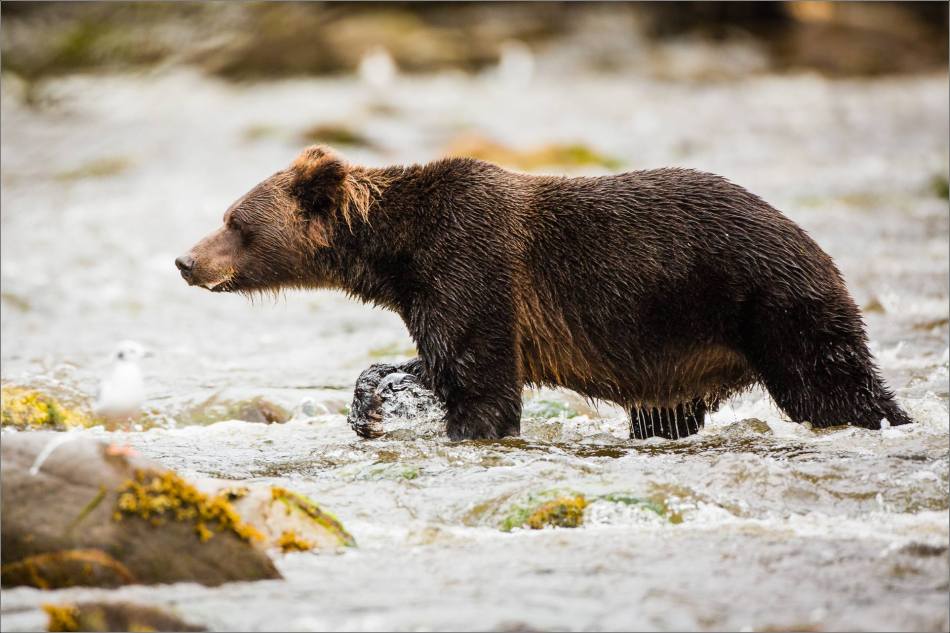 She paused frequently to smell the air.  Lifting her nose up and looking around it seemed likely there was another bear in that area, perhaps the dark bear seen earlier.  She was wary and Dan was not surprised when she pointed east and left the grass for the slippery rocks exposed during low tide.  She was heading for the estuary where the majority of the salmon run and the hunting can be very productive for the bears.

With the full moon pushing and pulling water down the long Khutzeymateen Inlet, there was a difference of six metres between high tide and low tide.  When the water was up, it came right to bottom branches of the trees on the edge of the rainforest.  When it is low, many of the bears use the easier path along the exposed band of lichen and kelp covered rock to cover ground.

With rain now moving from a drizzle to a steady downpour, we settled into a rhythm with Blondie paralleling her as she walked and swam along the coastline.  We moved with her for the better part of an hour.  She disappeared into the forest in a couple of impassable spots and then re-emerged again.  Twice she slipped into the water and paddled along that route for a while before making landfall and carrying on. 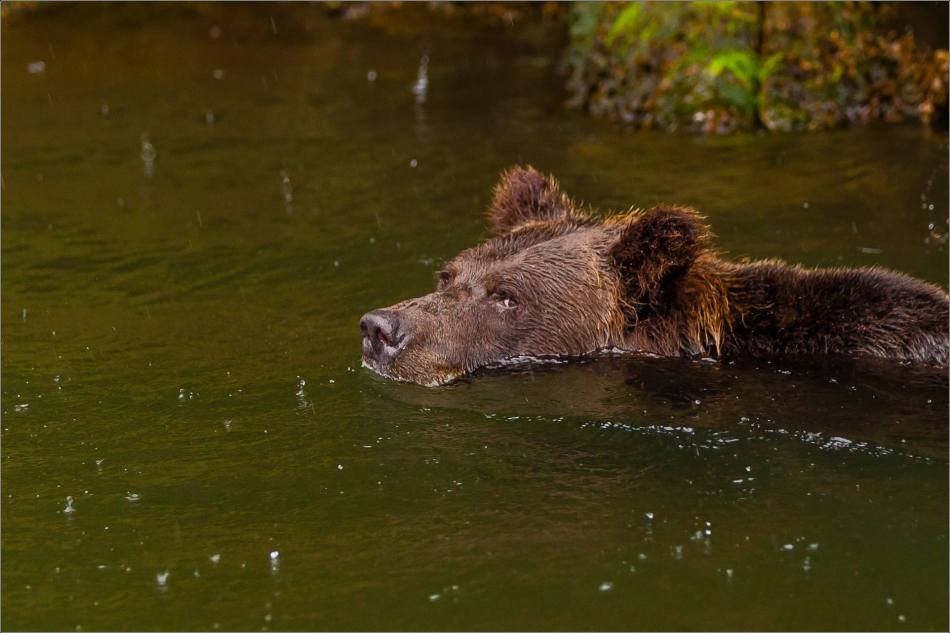 This was an incredible opportunity to watch a Grizzly bear move through her environment at her pace, undisturbed by us due to Dan’s understanding of this population and this specific animal.  We met up with Blondie again a couple of days later and I will share that story in another post. 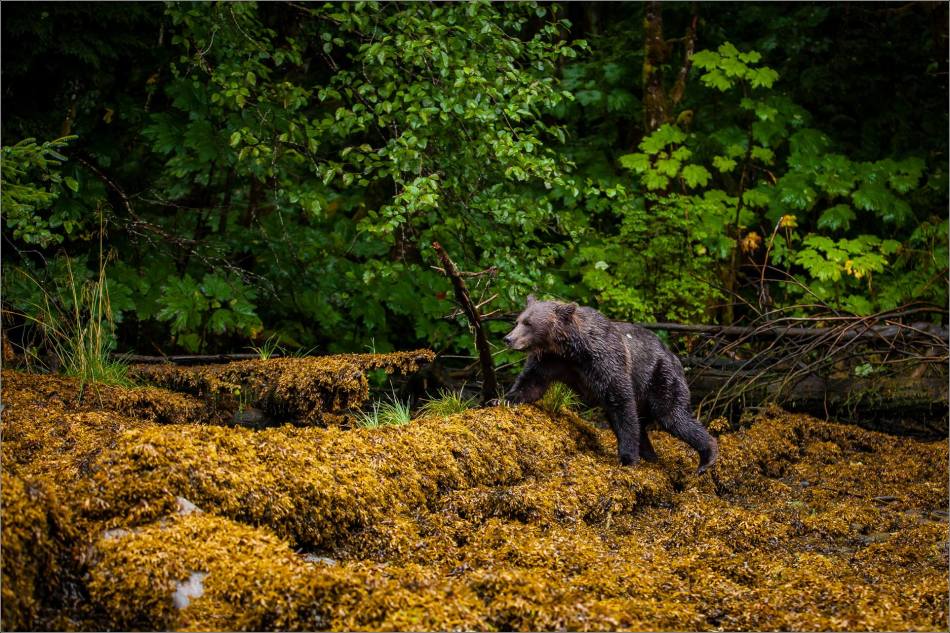 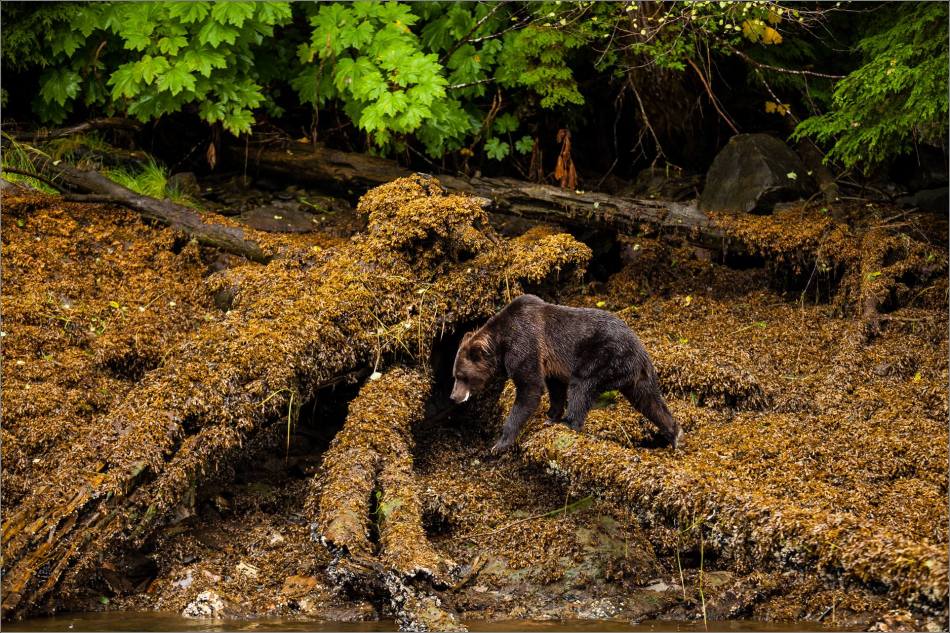 At the next meadow of sedge grass she pawed at the ground in a couple of places, sniffed at the air a couple of times and then walked into the trees to a trail that Dan has seen which leads to the estuary still a mile further down the inlet.  We parted company and returned to the Sun Chaser for our own dinner. 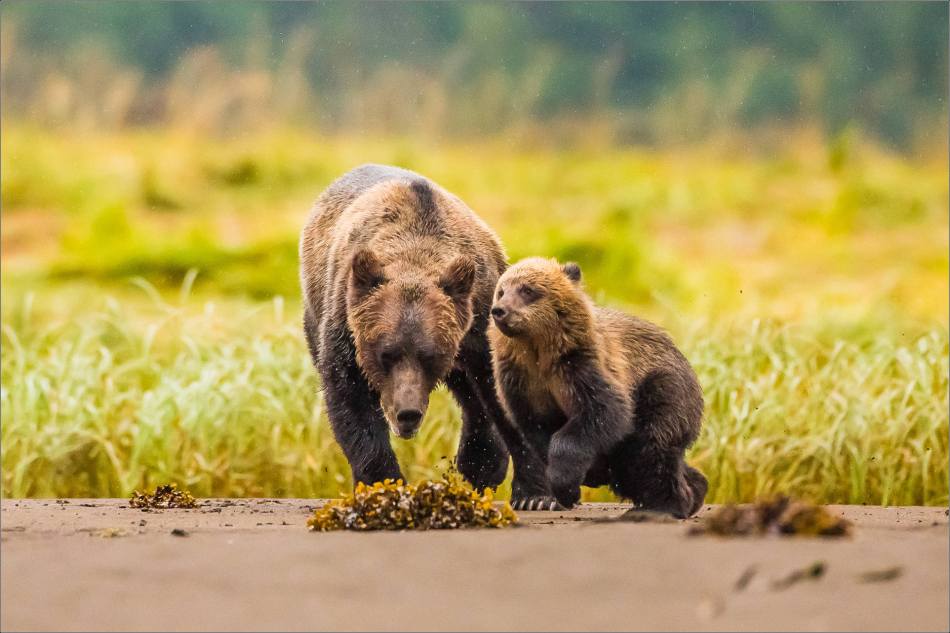 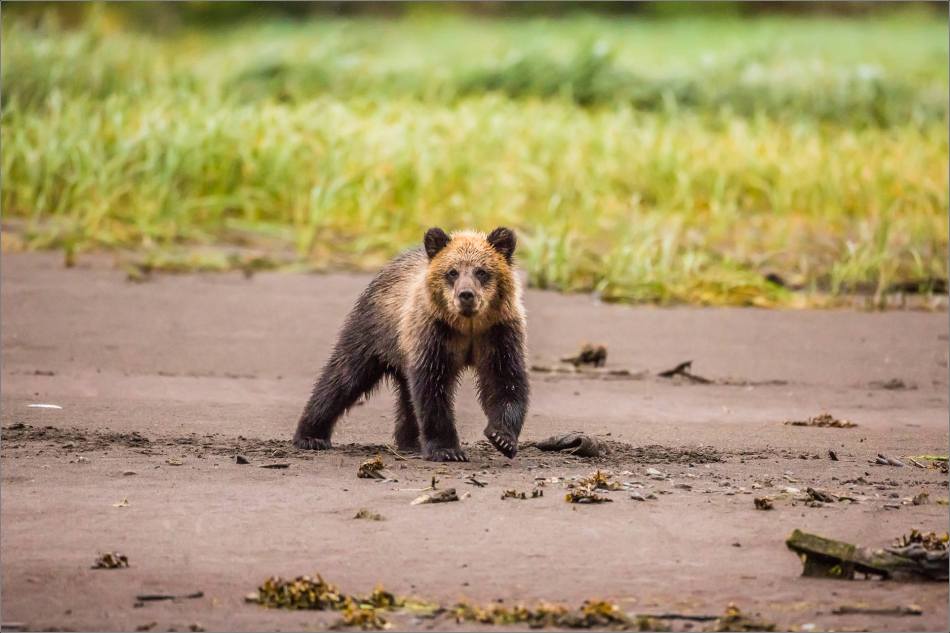 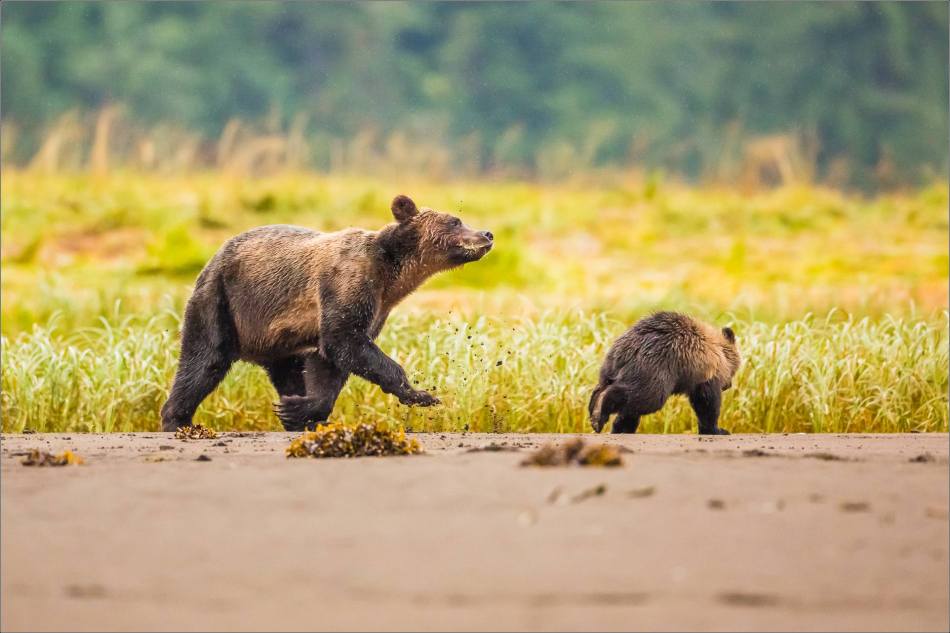