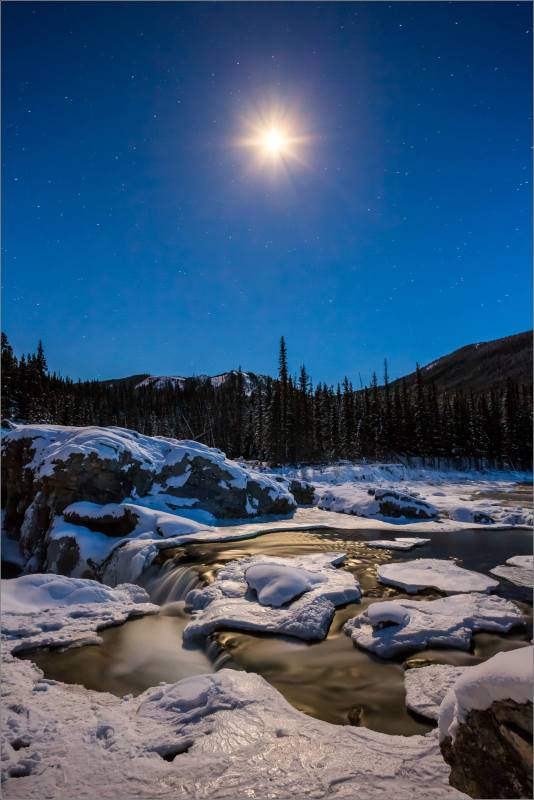 I hope you are enjoying time doing what you love with those you enjoy spending time with.  I have been able to do both with family and friends this holiday.  For Boxing Day I created some time alone and went up to Elbow Falls in Kananaskis.  It is a beautiful location, particularly when blanketed in ice and snow.  The afternoon held broken clouds but the skies cleared as sunset faded.  The half-moon emerged from the veil and shone incredibly bright in the night sky.  The moonlight washed over the rapids above the waterfall while stars began to take their place above.  I deeply enjoyed being in this scene. 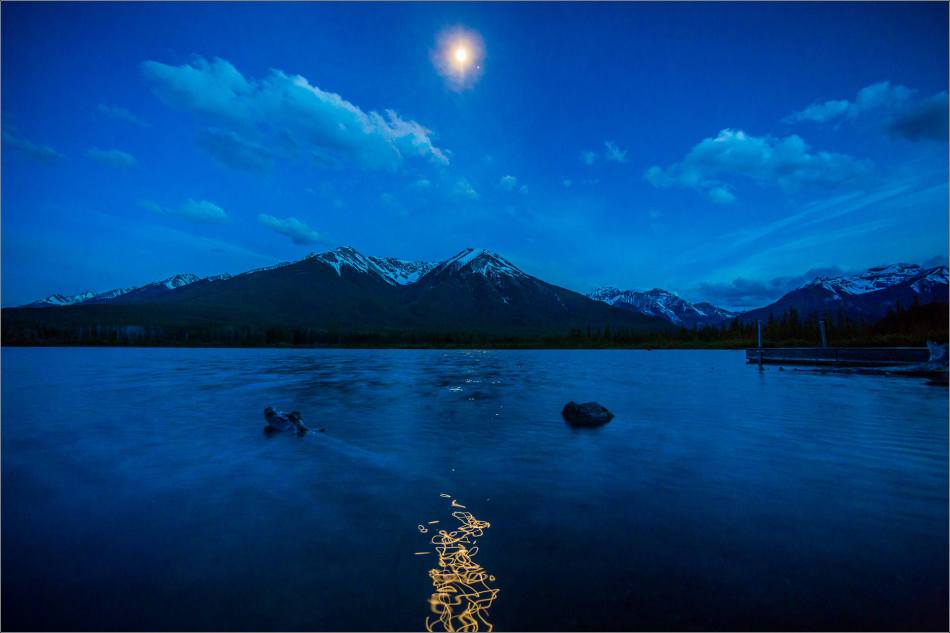 The moon was scribbling on the surface of one of the Vermilion Lakes in Banff National Park on the weekend. 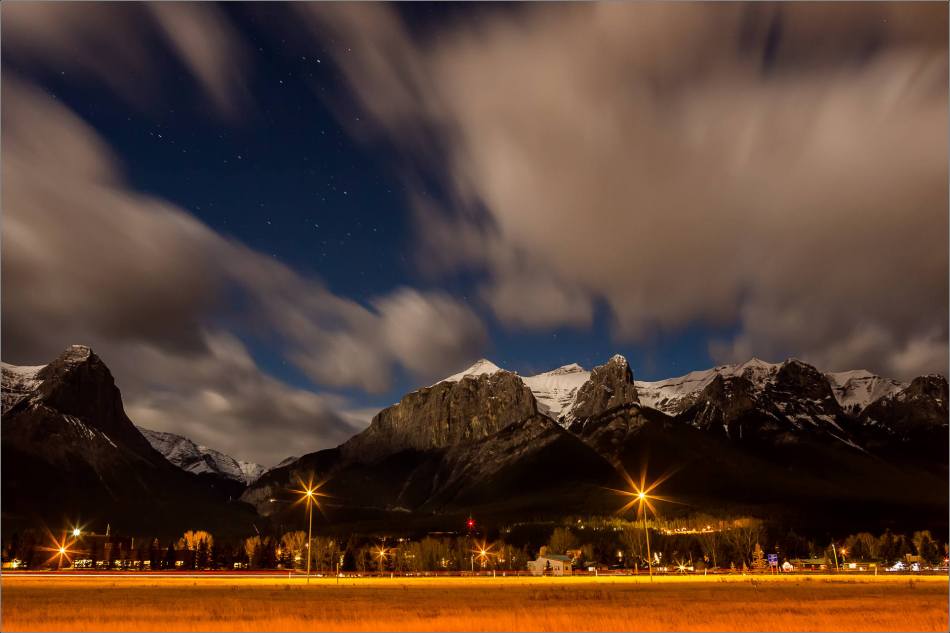 A couple of weeks ago I spent a night under the stars on the shore of Lake Minnewanka.  On the way there, as I passed through Canmore, the full moon was lighting up the mountains that connect the town with the sky.  Here the tip of Ha Ling and the East End of Rundle (EEOR) were lit up during the long exposure I made looking across the Trans-Canada Highway and over the town.

As the moon waxed towards full this weekend, I spent an evening at Elbow Falls to photograph the landscape at night.  The clear air allowed stars to shine even with a relatively short exposure and small aperture (10 seconds and f/8.0, respectively).  Always a bit lonely sitting out there for a couple of hours but the stars are really good company. 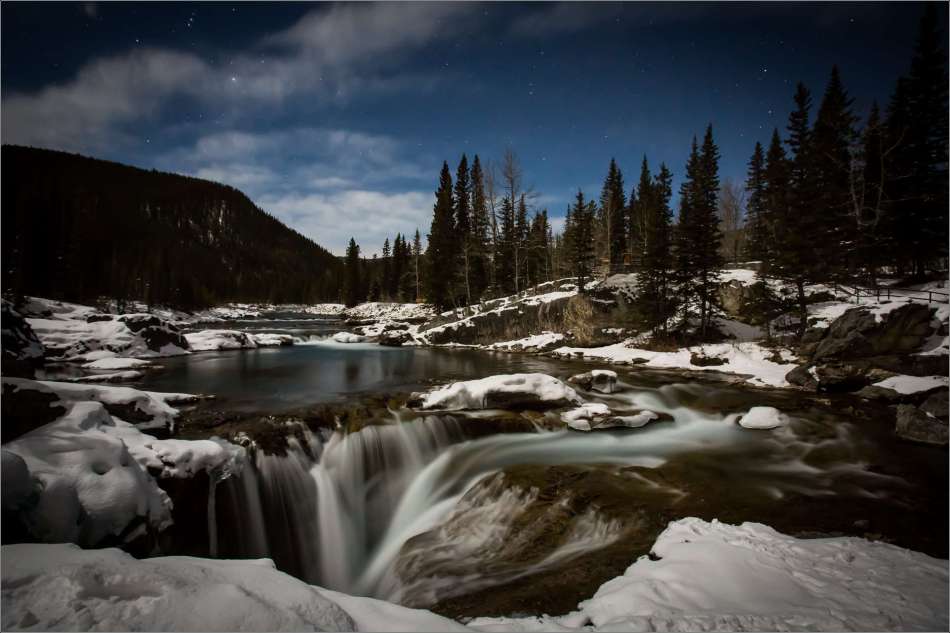 The 6400 ISO and the bright moonlight allowed for some of the great details at this magical place in Kananaskis Country to show in the image.  I am impressed with the improvements in the dSLR’s low-light capabilities over the last couple of years.  A couple of years ago I spent another evening up at these falls. At that time I was using a Canon 1D Mark III and when compared with the image above and others where I used a 5D Mark III, the detail, structure of the noise and the color are all vastly improved.  The technology is less and less of an obstacle to realizing the images I want to make.  I like that a lot.

Nightscapes on the Prairie

A snowstorm obliterated the opportunity to photograph the “supermoon” on March 18th but I was out in a field the night before to see how the moon looked.  The moon was impressive and it was really great to be out in the moonlight for a few hours.  In the image above, the pink sky is the result of the city glow and the light from the moon.  With two of the three deer walking slowly during the long exposure, they have a ghostly appearance. 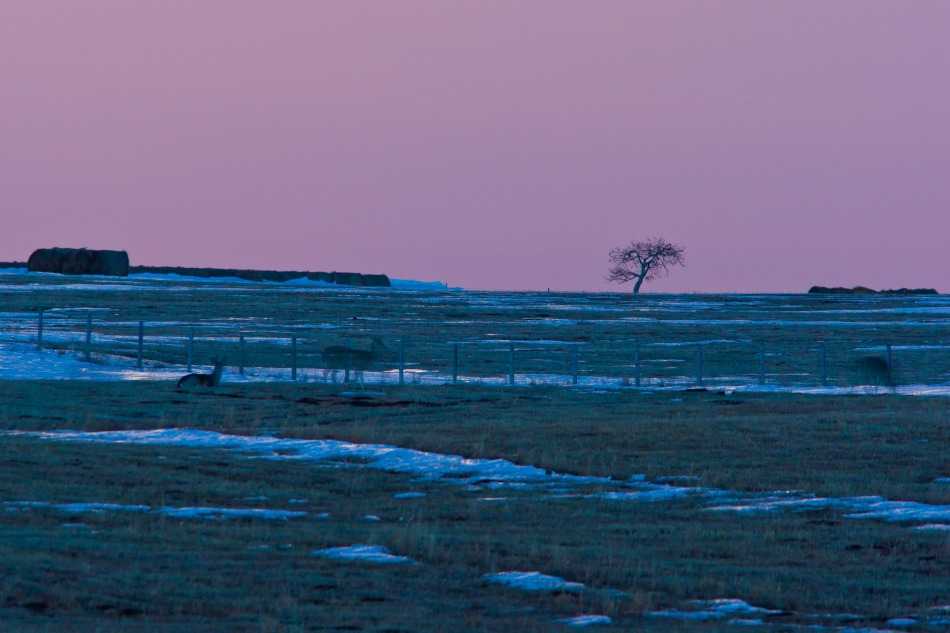 As the last couple of deer trotted past, I panned with them.  Under the moonlight they were dimly illuminated so I raised the ISO, opened the aperture and underexposed a bit to try to capture enough light to show the landscape with the deer moving through it.  Even with the noise in this image I like the motion. 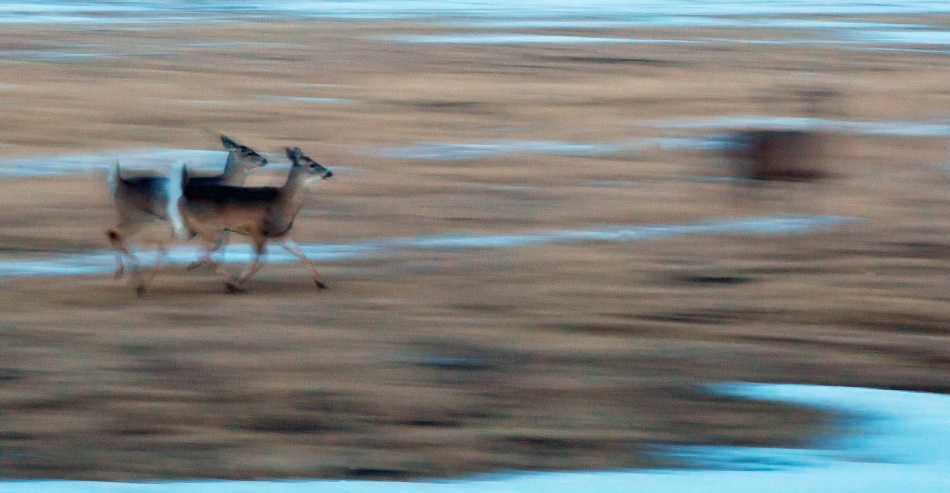 Below, a simple landscape image with the moon as it rises clear of a band of haze laying just above the horizon. 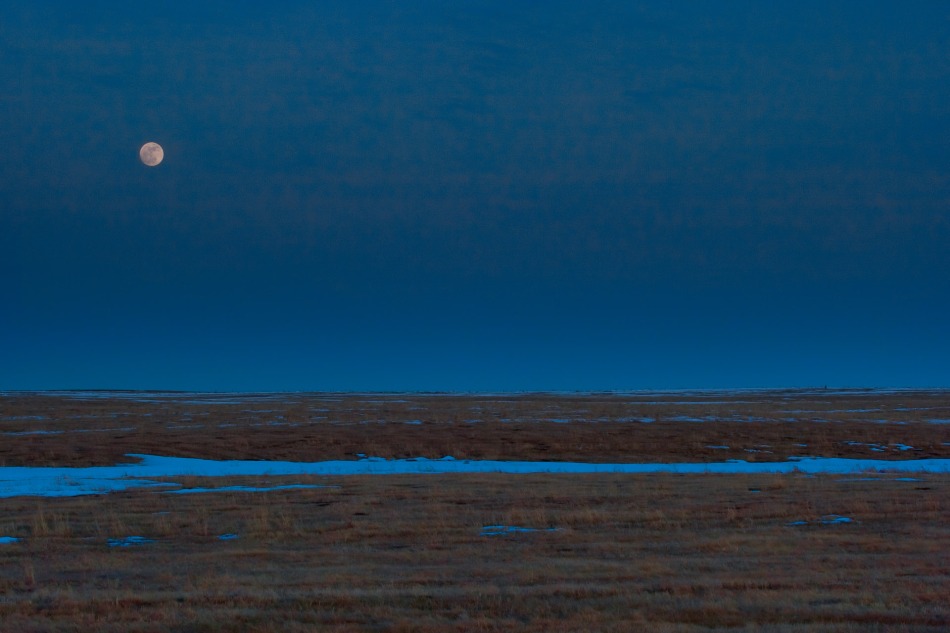 A long exposure looking west towards the mountains was one of the last images from the evening.  The layers in this photograph from the lights, to the hill, the mountains and into the stretched sky are interesting. 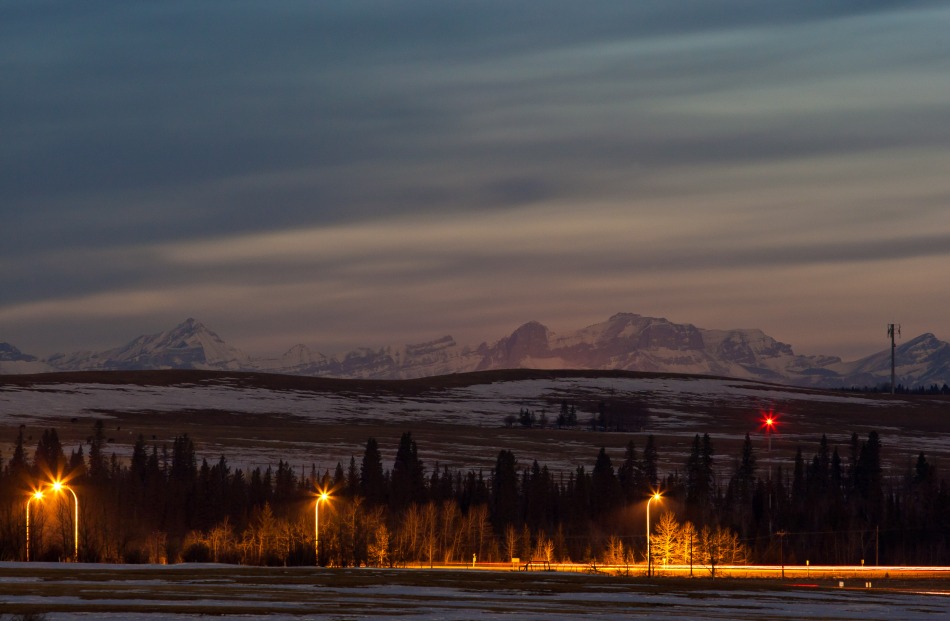 As for the moon itself, I didn’t take an image that really showed the scale of it during this close pass unlike some of the incredible photographs I have seen around the web.  This image was taken with a telephoto lens and then cropped in slightly.  It doesn’t convey how close the moon came but it is nice to photograph our lone satellite. 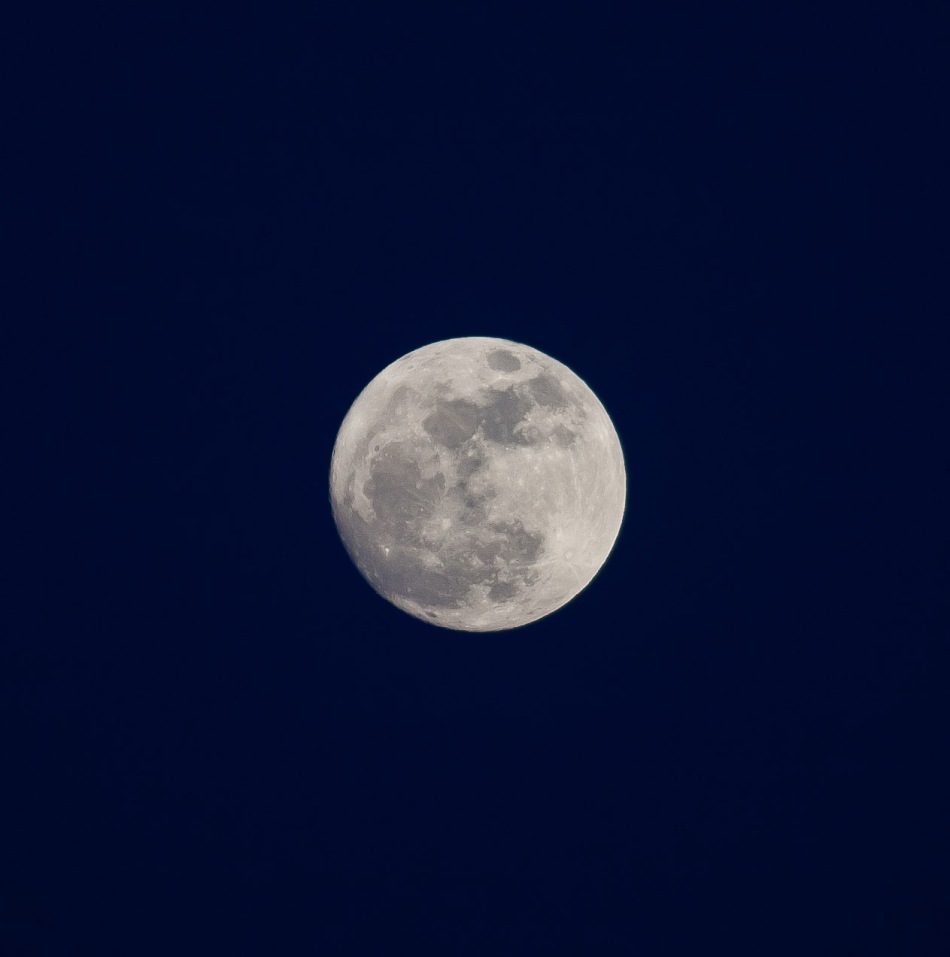