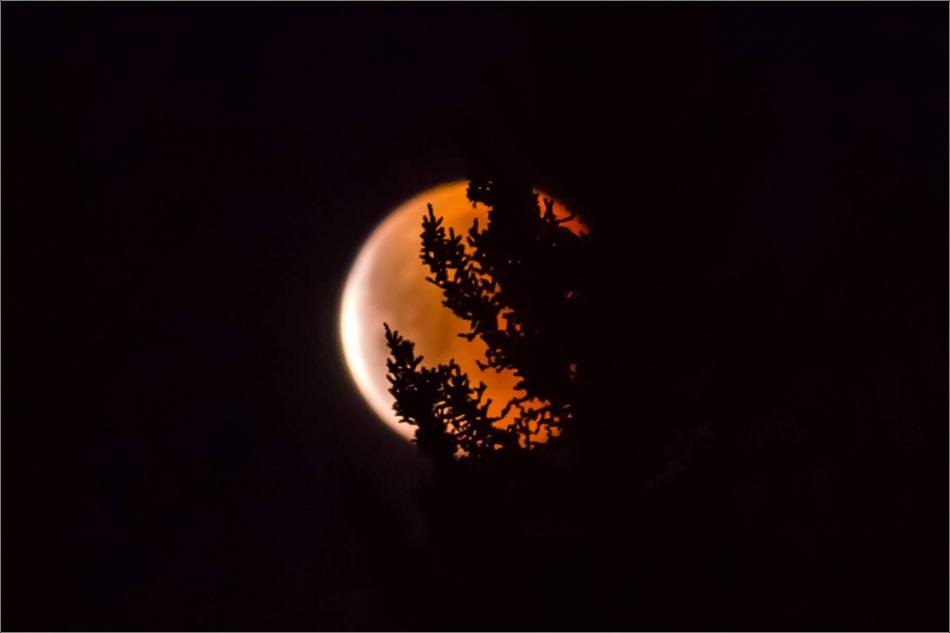 I was very excited to get out to photograph the most recent lunar eclipse.  I kept an eye on the weather forecasts and knew clouds were moving over southern Alberta that night.  I hoped for a break in the clouds but when I woke up early that morning the sky was low and heavy with no stars, or moon, to be seen.  So, I packed up and headed west to see if I could get the western edge of the cloud front.  My first glimpse was between Canmore and Banff when I came around a corner and the moon was hanging in the sky.  That was not a safe place to stop and the moon alone in the blackness was not the image I had in mind so I kept going to Banff.  Thought I still did take that shot a little while later! 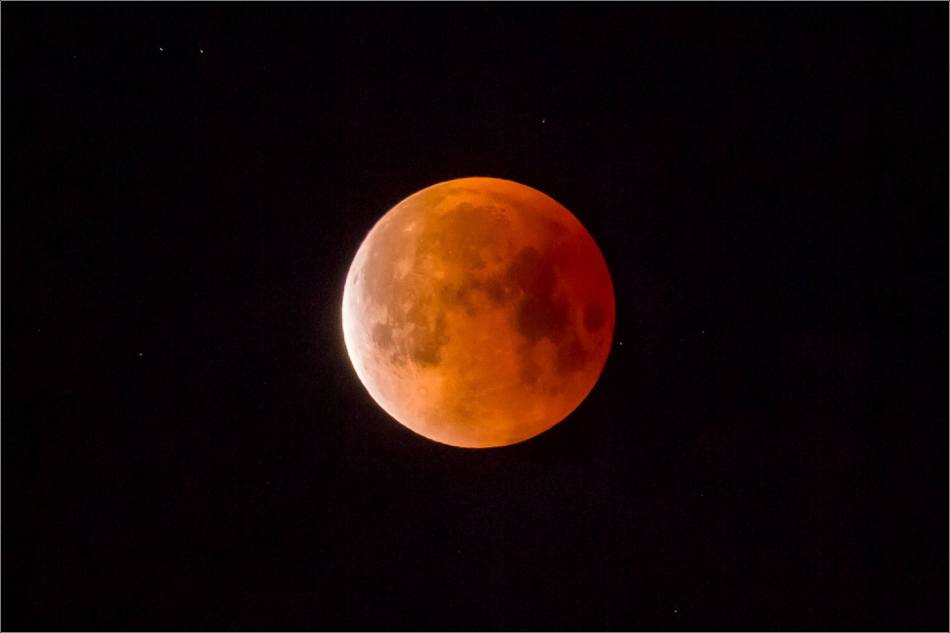 Clouds returned by the time I was in the townsite so I headed up towards the hot springs to see if I could find a good vantage point.  That didn’t pan out but when I came back down, the moon re-appeared.  Now it was falling quickly towards the western flank of Cascade Mountain.  Her and I then played a game of hide and seek as the clouds continued to drift in front of the red globe. 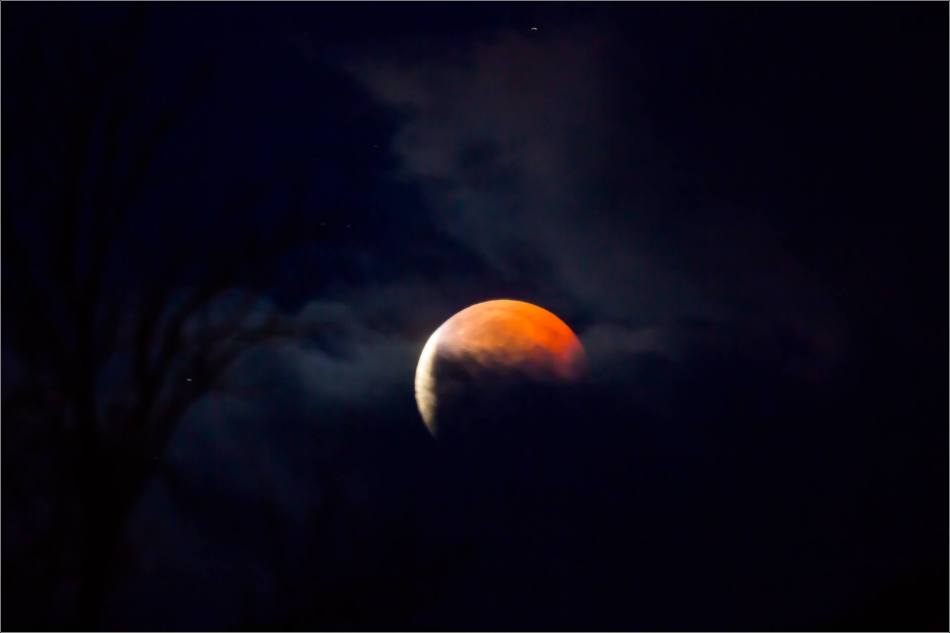 I framed the moon using trees and the mountain’s ridge line when the opportunities came.  Within a few minutes it disappeared.  I didn’t realize the image I was looking for but had a great time watching the spectacle.  I have been able to photograph several lunar eclipses and always deeply enjoy the otherworldly beauty as the moon slips into and eventually out of the sun’s shadow. 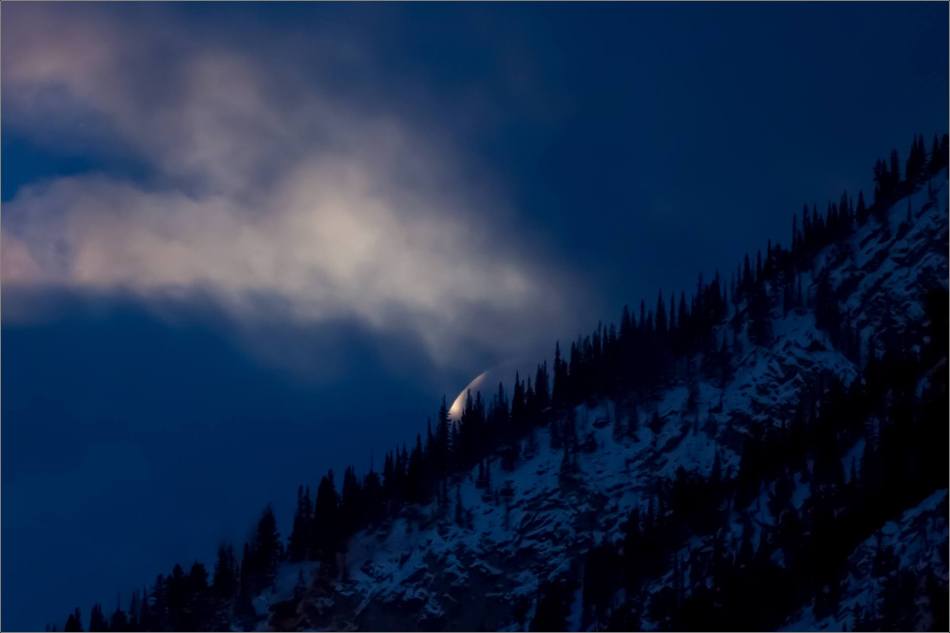 Eclipse of the super moon 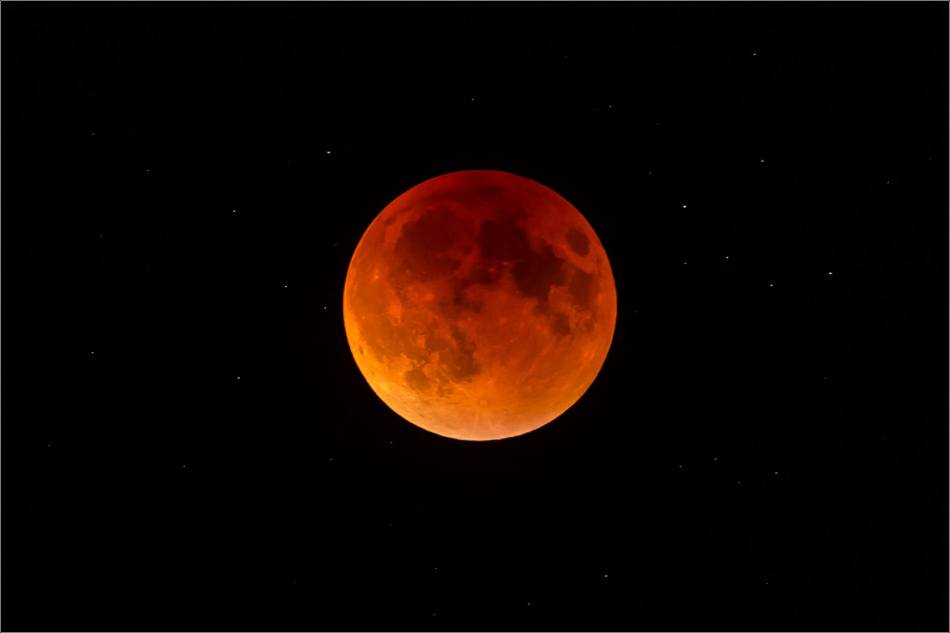 Last night was the lunar eclipse where the moon turned a deep red which lasted for more than an hour.  I traveled to south to get to the edge of the clouds which had rolled in over my home in Bragg Creek before sunset.  In Turner Valley I found clear skies and set up as the moon was entering the earth’s shadow. 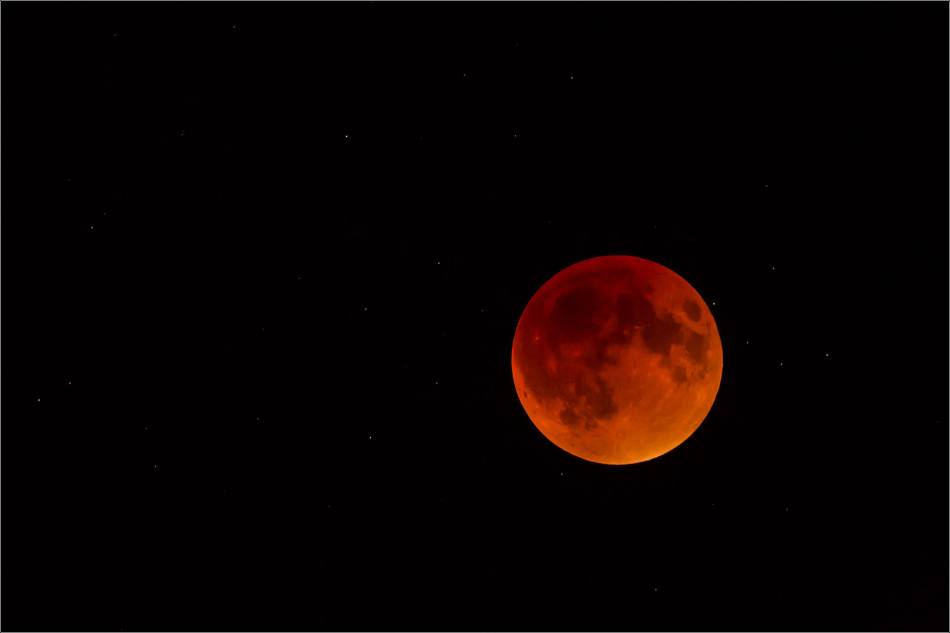 I was awestruck, as usual, with this fourth of the tetrad of lunar eclipses which have been spaced six months apart starting in April 2014. 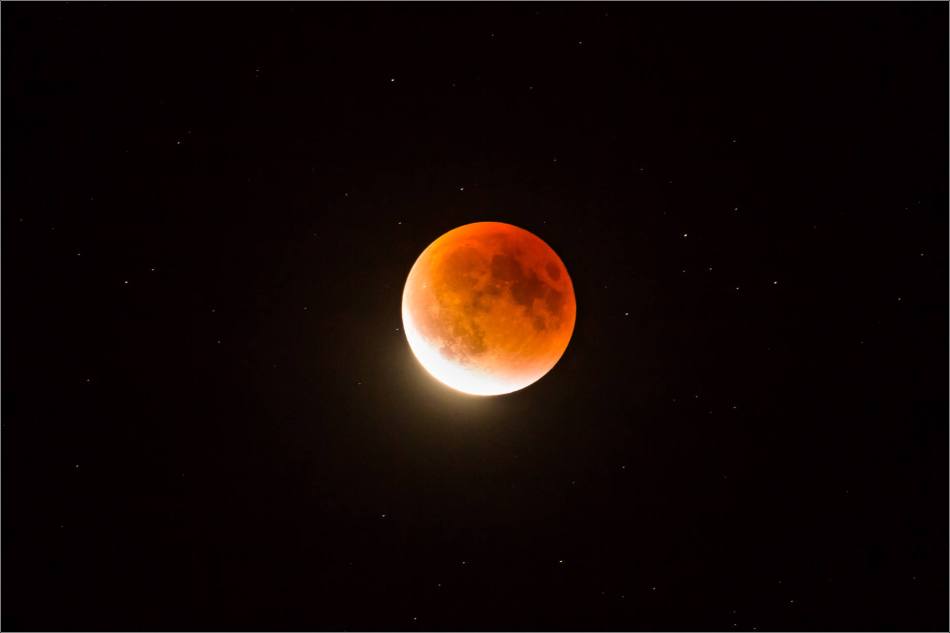 It was a beautiful transit with the moon’s surface moving through oranges and reds before returning to her brilliant white.  It has been an incredible series of events to witness and I have enjoyed photographing them immensely.  I’m excited about the new beginnings and opportunities they herald. 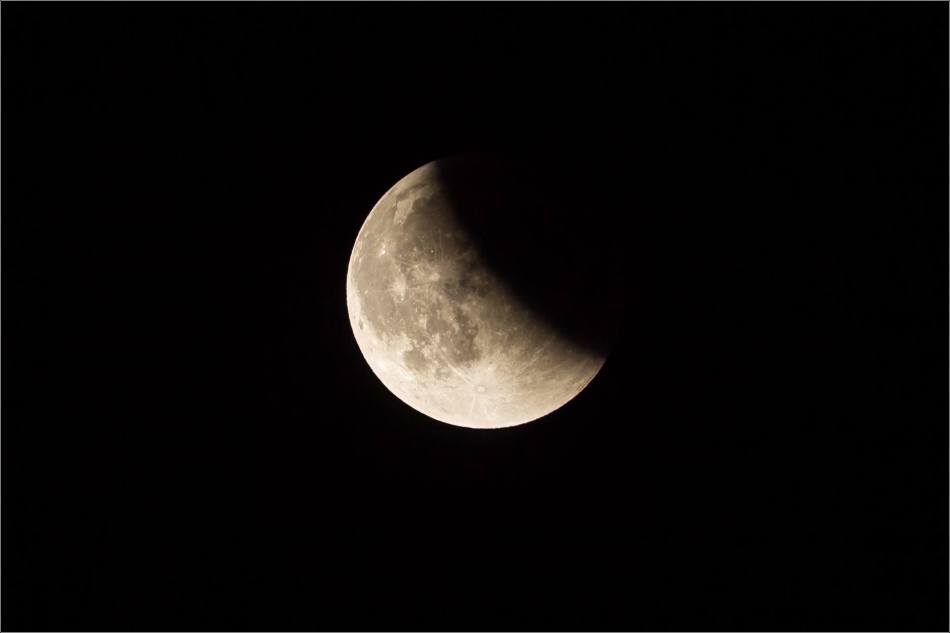 The last half of the lunar eclipse 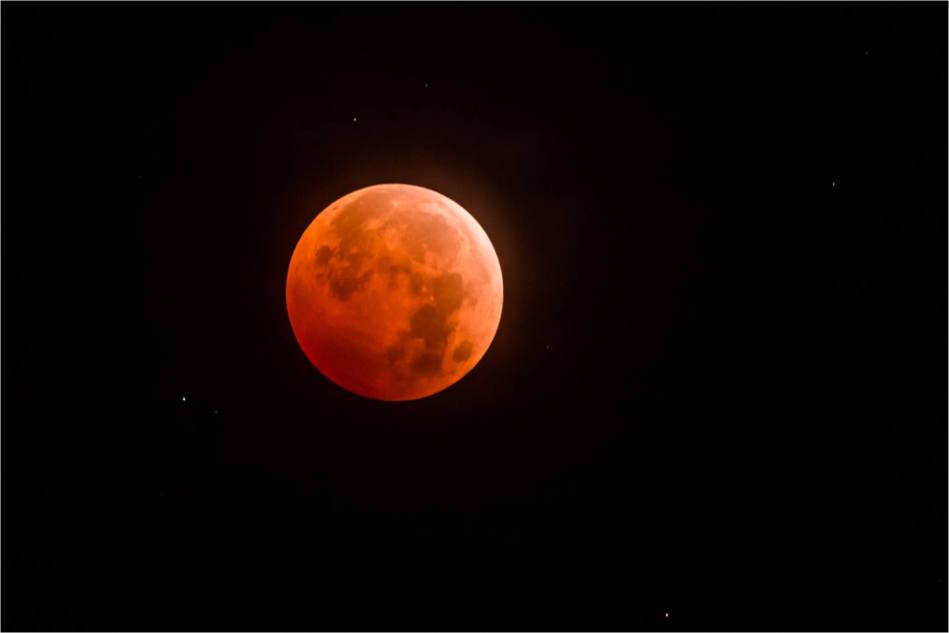 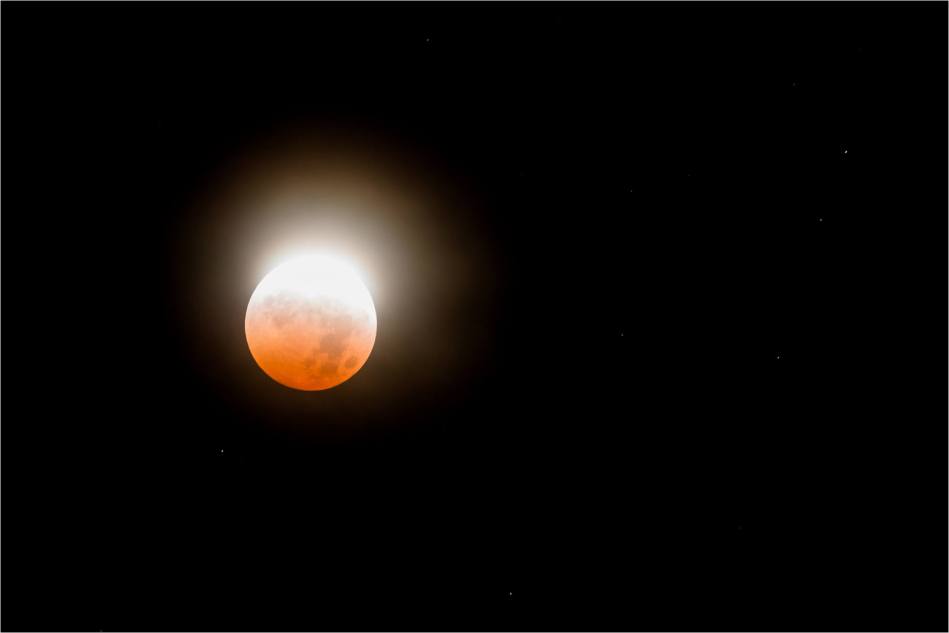 The glow from the moon coloured the landscape as well. 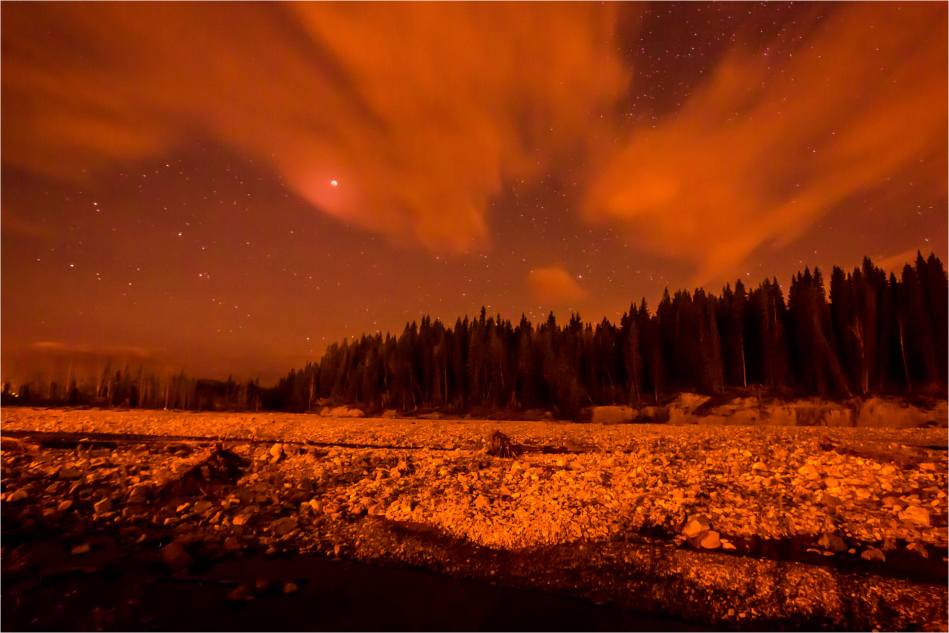 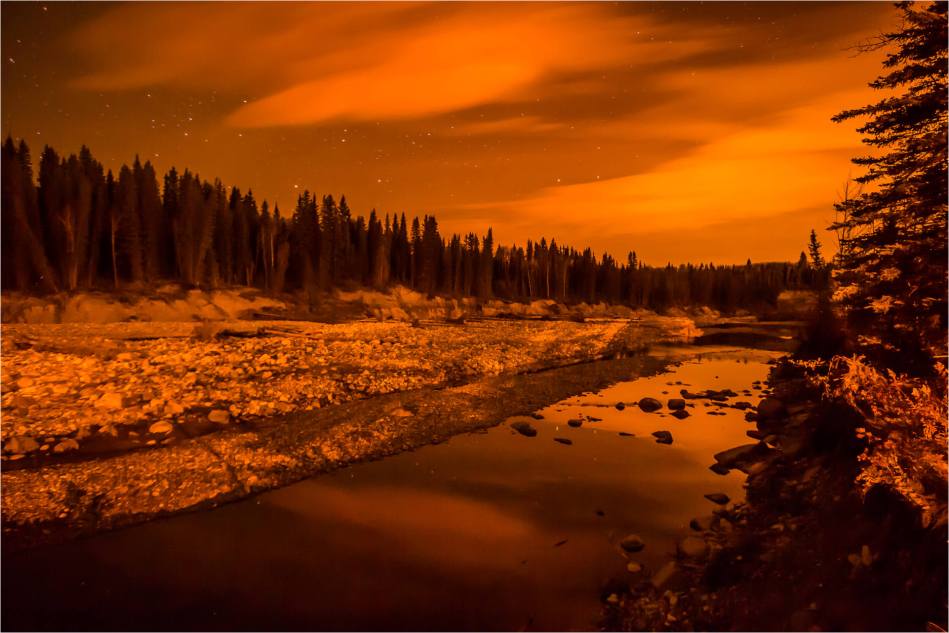 The moon left the shadow much too quickly for me but it was fun to watch the different looks as the clouds moved, the colours changed and the blood moon slipped away. 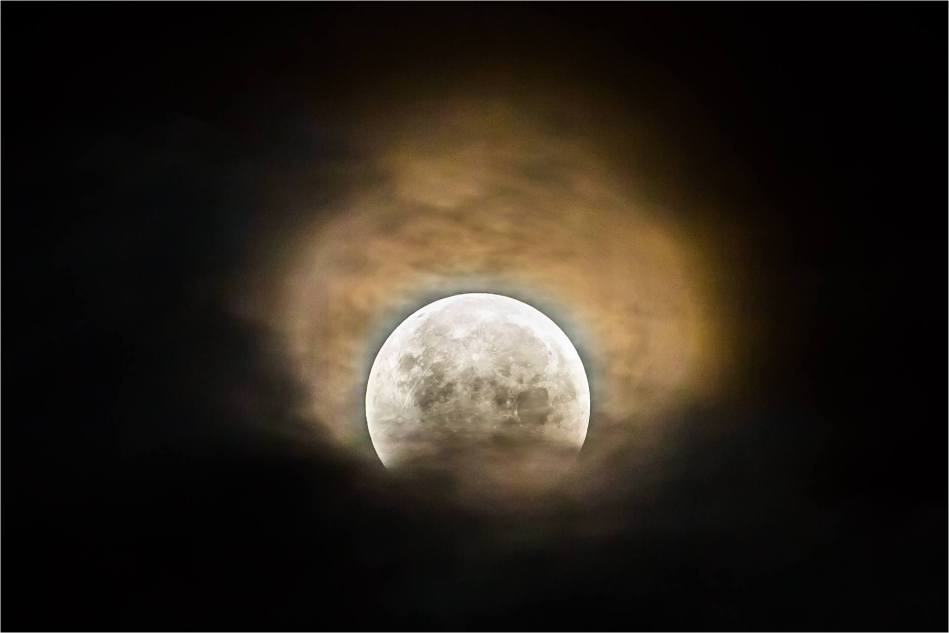 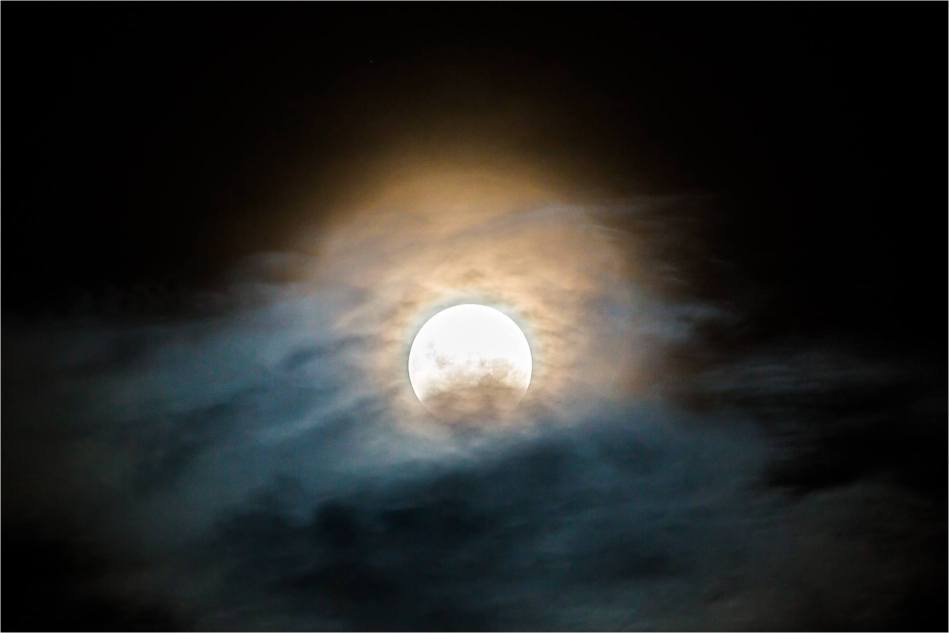 The sky brightened along with the moon and I called it a night. 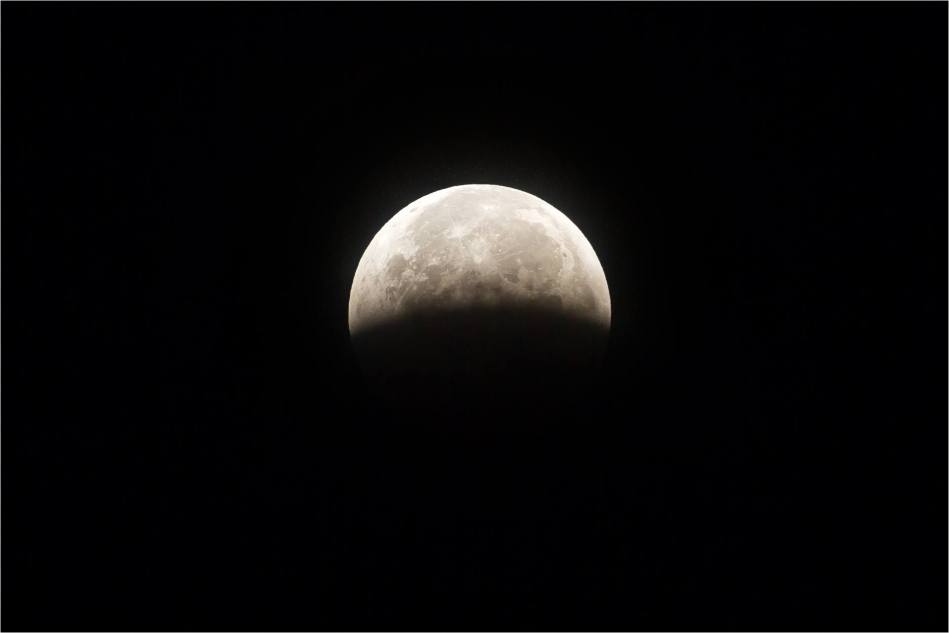 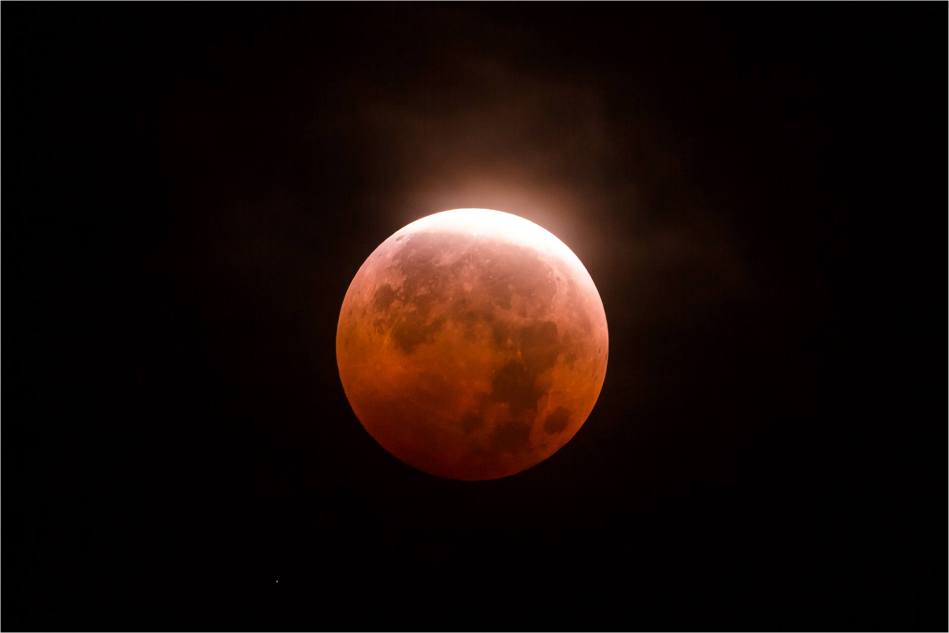 Eclipses fascinate me and this morning’s lunar eclipse was outstanding.  It was overcast for much of the night so I wasn’t sure how visible the Moon would be as it reached totality.  While it was in the Earth’s umbra, the clouds started to clear and I was able to watch the latter part of the performance.  This image was taken when a cloud passed along the top edge of the Moon while the moon was coming out of the penumbra and the sun was lighting the upper hemisphere. 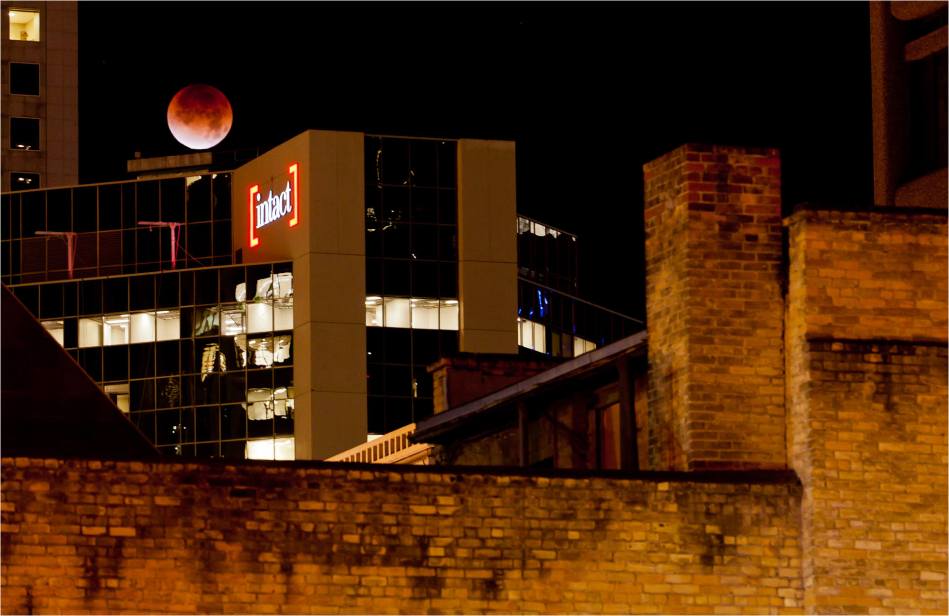 Here in Calgary the lunar eclipse started early at 4am. While walking for an unobstructed view of the moon, the image above was my first look at the eclipse. 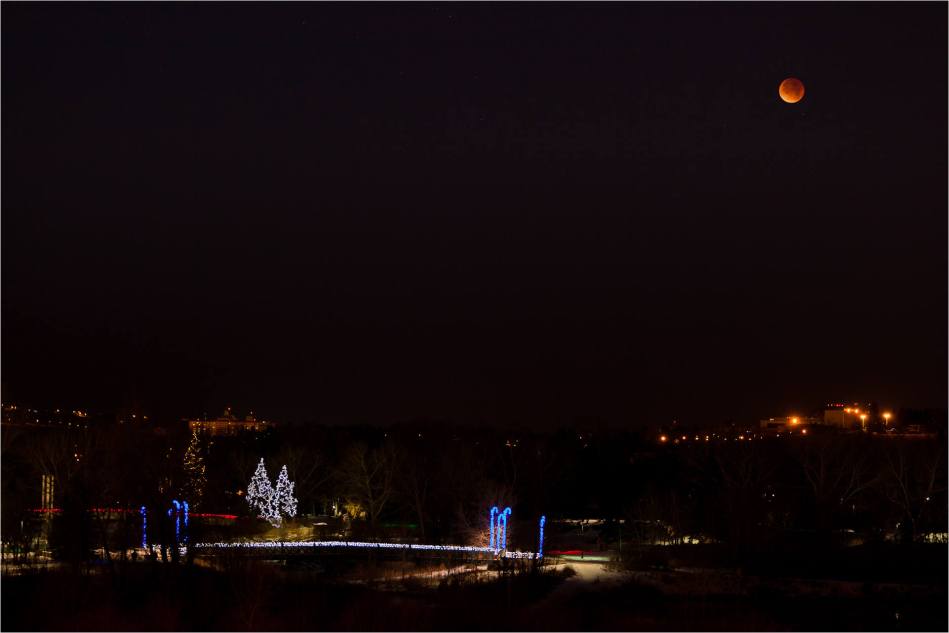 However it wasn’t until about 7am that the moon was fully in the Earth’s shadow about an hour before sunrise and stayed there until just before dropping below the horizon. 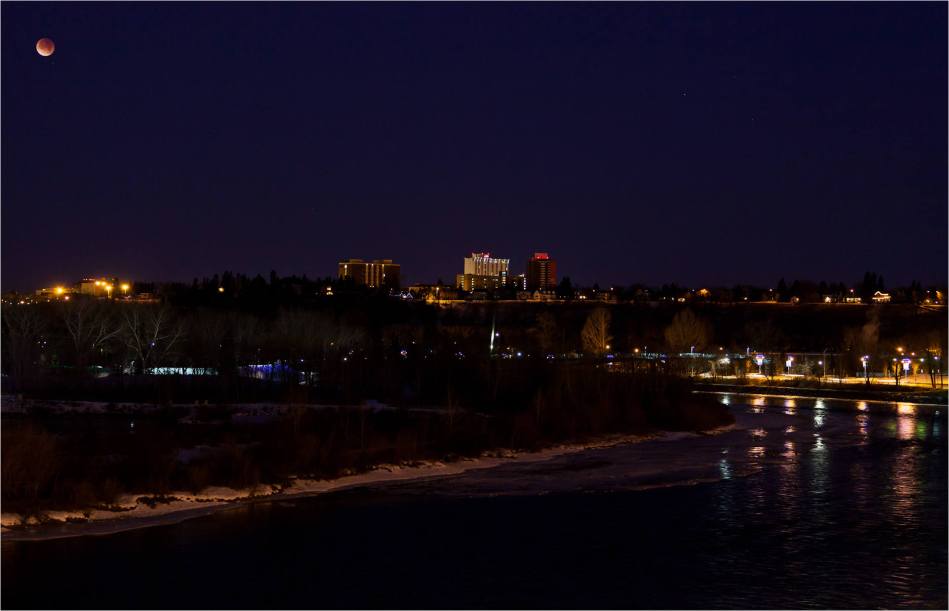 I walked through the downtown early ending up on the Centre Street Bridge.  From the bridge, the moon was glowing red over the Prince’s Island Park on the Bow River.  The Park was illuminated by Christmas lights and the occasional street light which formed nice elements to include in some of the compositions.

When the sun was almost up, the moon had necessarily started to move out of the shadow.  It was also very close to the horizon at that moment so the last image of the eclipse I have is a sliver of the moon framed in between the columns of one of the four lion masted plinths on the bridge. 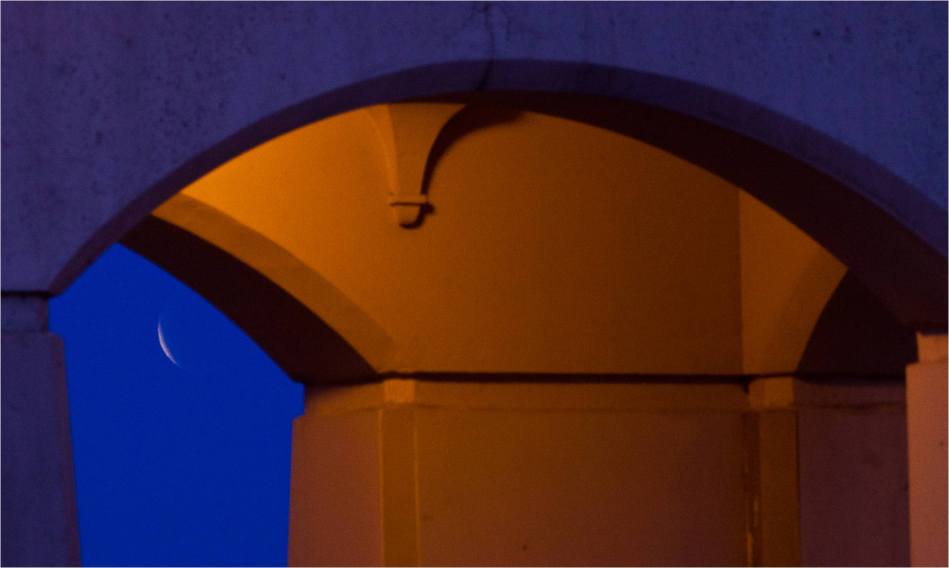 Before Earth’s shadow started to march across the face of the moon last night, I photographed the full moon as it climbed above the trees in Redwood Meadows.  You can see the mist around the moon and I was a little concerned that clouds and haze may obscure the visible signs of the direct alignment of the sun, Earth and moon.  I didn’t know then that the clouds would largely stay clear or that I was in for a very interesting performance. 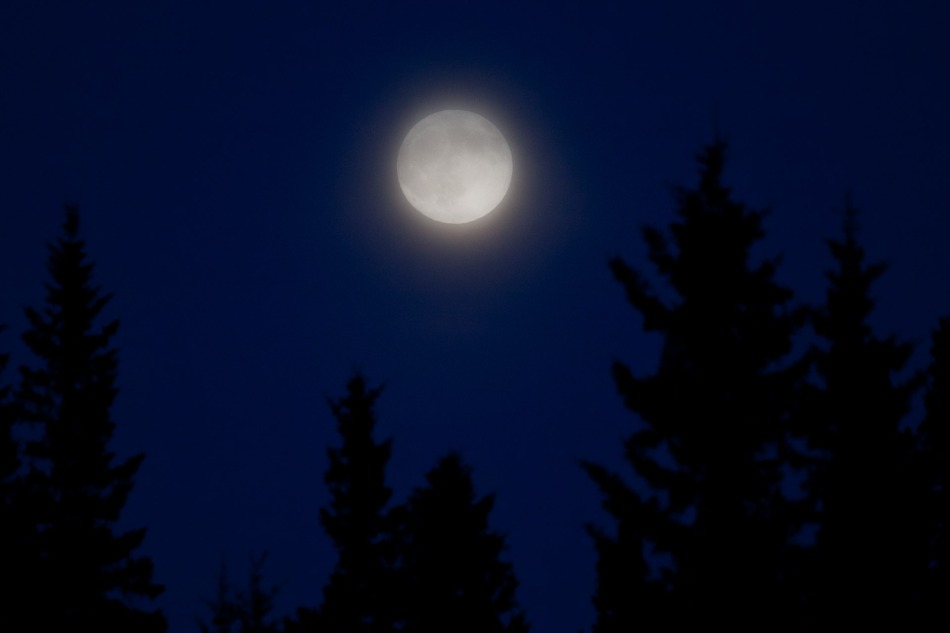 The solstice lunar eclipse started normally last night and I was out in the freezing cold photographing the progression towards totality. 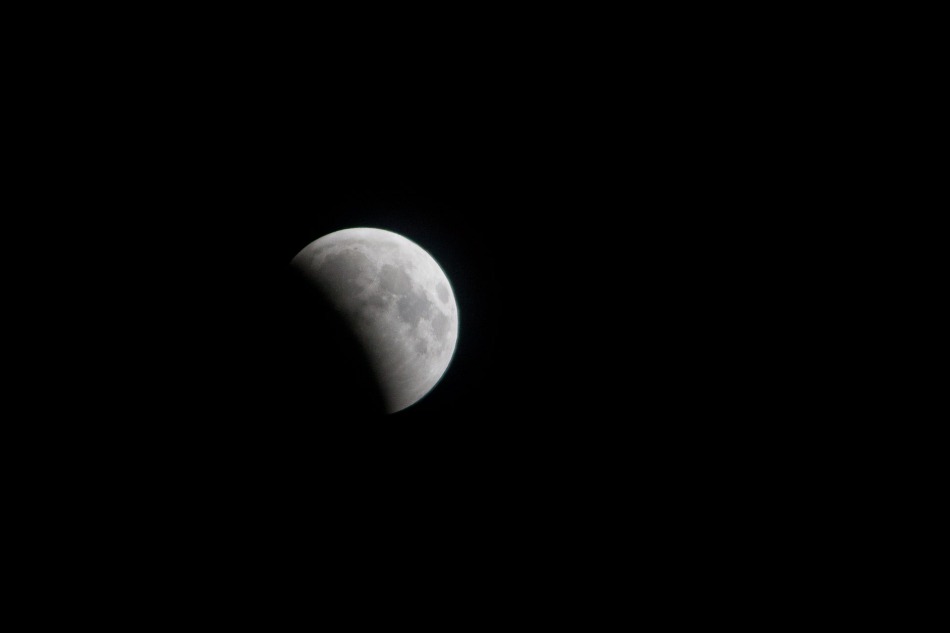 Then, things started to get very strange… as the moon started racing around like an excited puppy. 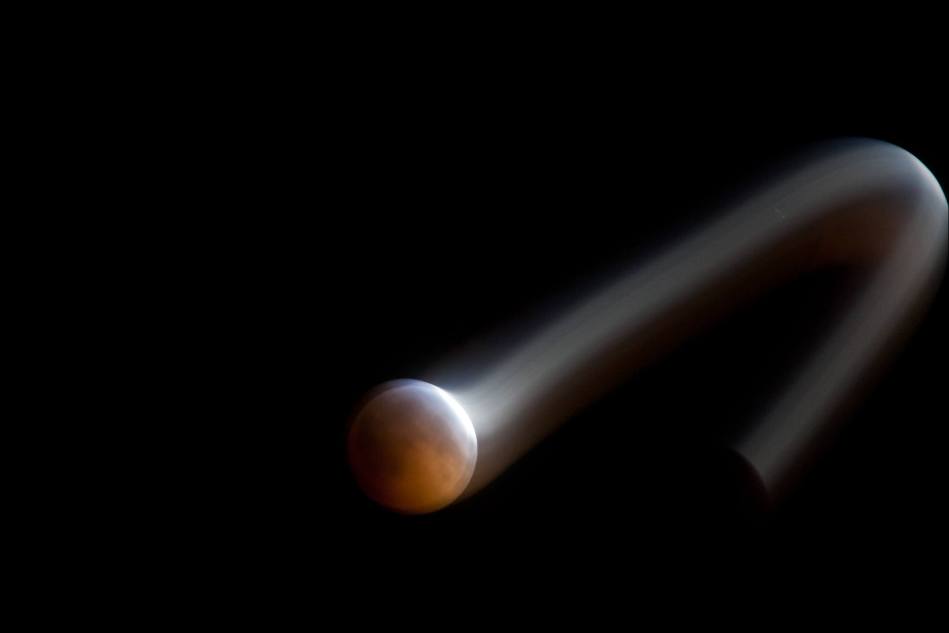 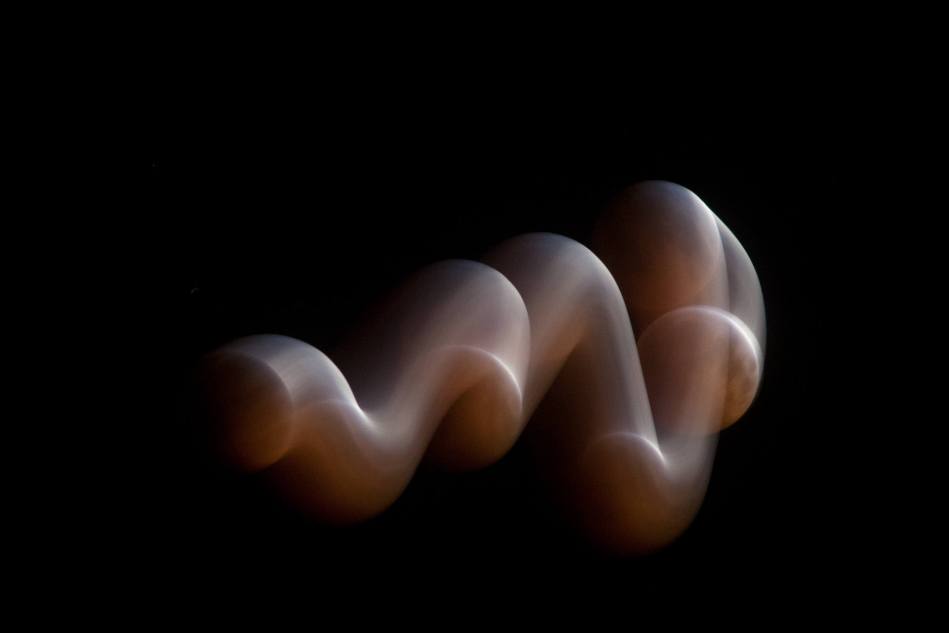 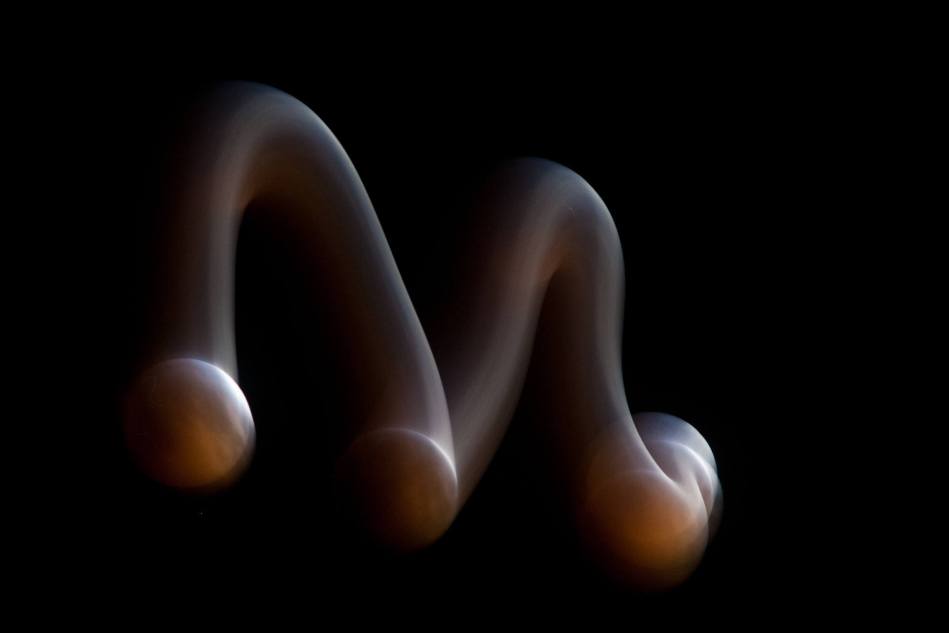 I went to bed as the moon settled back down, slipping behind the Earth and into deep shadow. 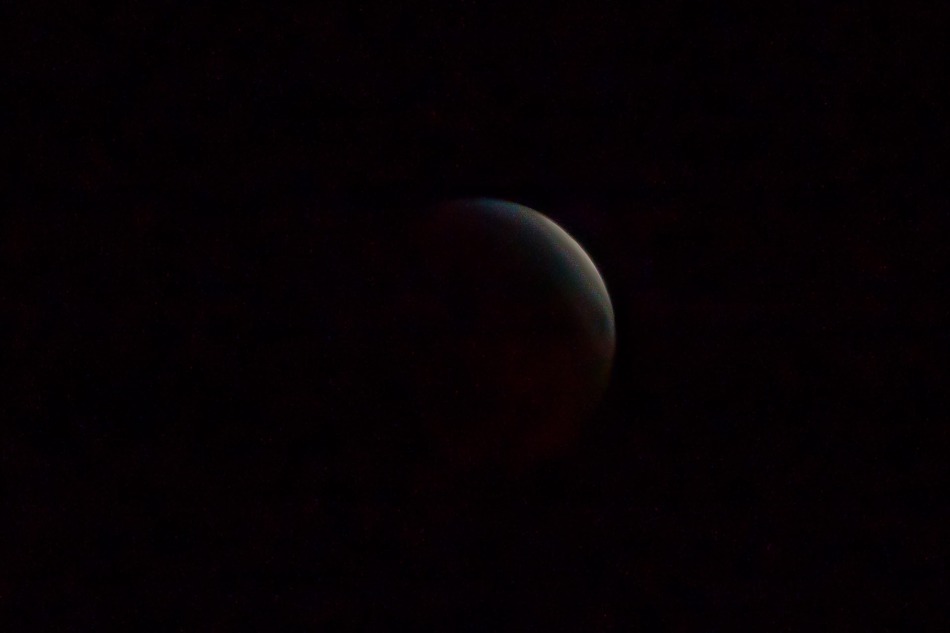 I saw it looming large on the horizon this morning so it seems to have emerged from shadow and appears to be behaving predictably once more. 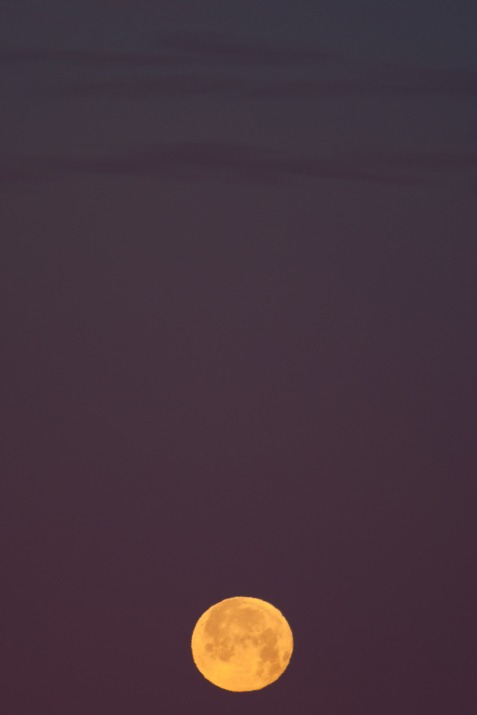 I enjoyed the lead up to the eclipse and the morning after was spectacular as well.  The odd bit during the actual eclipse was very fun too although I’m still looking for a reasonable explanation.

Please note: the moon trails were created by moving the camera around slightly during longer exposures up to two seconds long.  I wrote the story for a bit of fun not to be mistaken for an actual phenomenon observed.