(Please click on each image for higher resolution versions)

My friend Jeff came back out to Bragg Creek to photograph with me again last weekend.  We found a female Great Grey Owl hunting over one of the fields in West Bragg.

She was covering large areas of the field with each flight and it was fun trying to anticipate where her flight path would go as she crisscrossed the meadow.

The intensity of expression of these owls always holds my attention.  That coupled with the power in their flight motion make them so interesting to watch.  This encounter was no exception to that rule.

The talons are amazing too.  I have heard of people being attacked by Great Grays when they strayed too close to a nest – I continue to believe that is something to be avoided.

I had a great morning earlier this week watching this female Great Gray Owl.  She flew to several perches as she moved from the forest into the open meadows nearby. 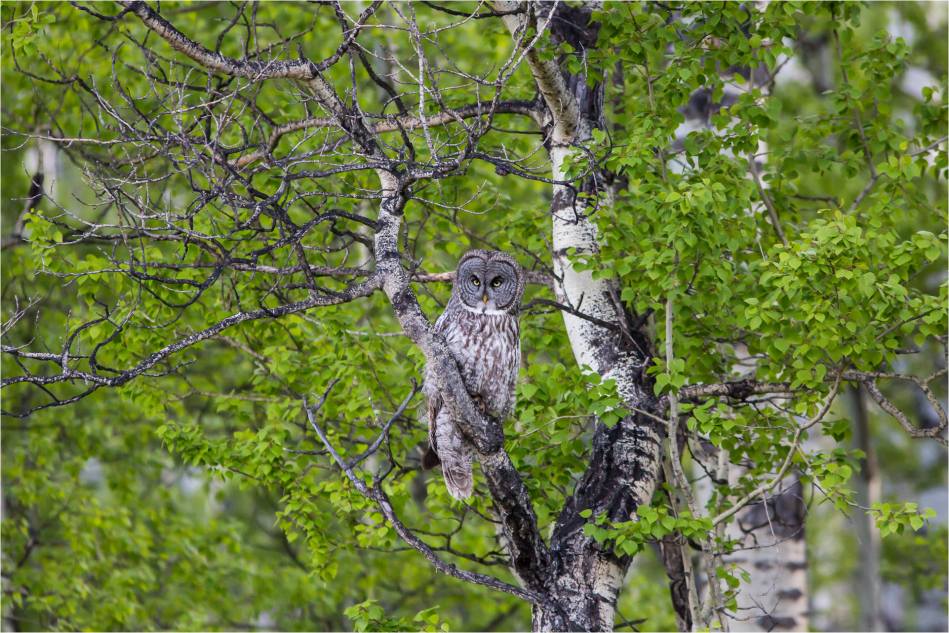 She was watching for quite a while at each stop.   She seemed pretty relaxed, without any great urgency to hunt. 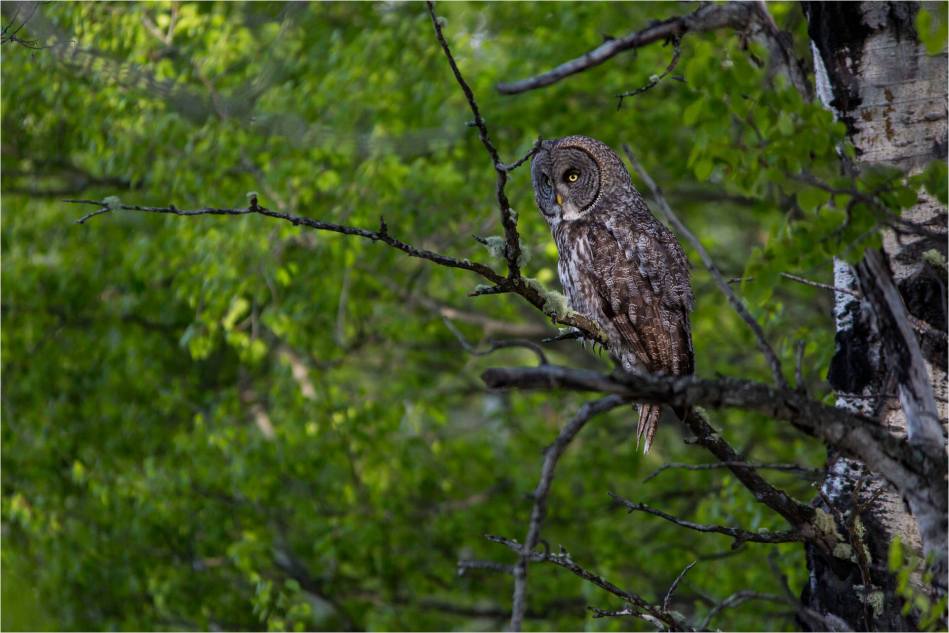 Down the field, the sun was reaching into the trees.  The light that got through was really beautiful. 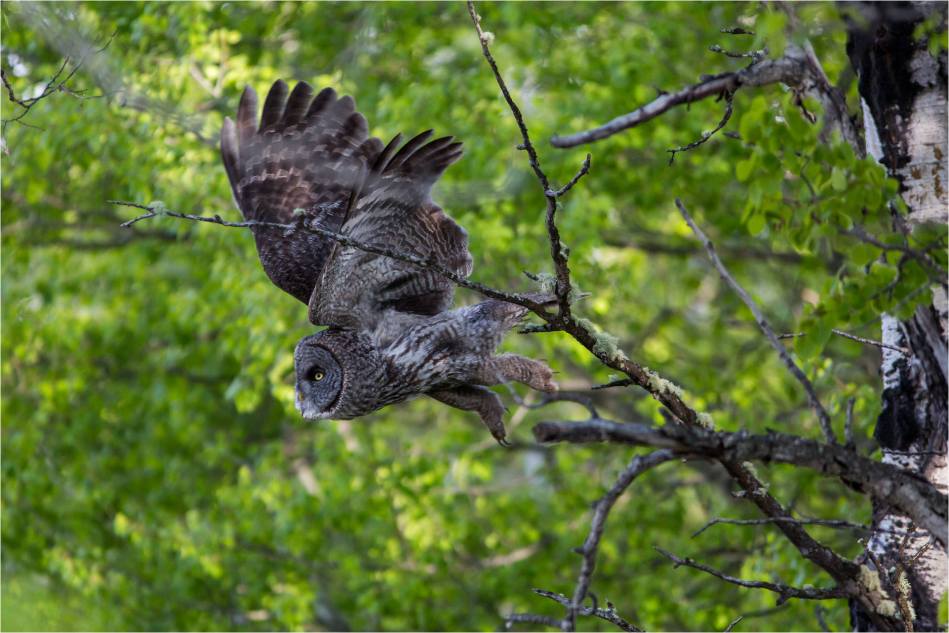 I’m hoping to hang out again over the weekend.  We’ll see if she is thinking the same thing. 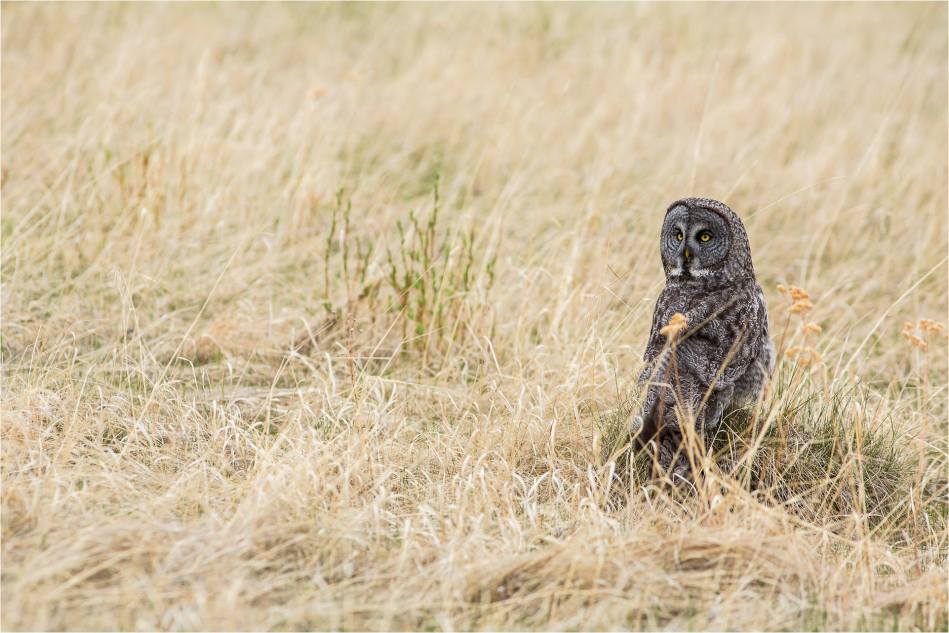 Just before the long weekend, I had an evening free to tour the back roads around Bragg Creek.  As the shadows grew longer and the heat of the day softened a little, I hoped to see some wildlife come out of the trees.  A few miles off the main road, I saw a Great Grey Owl perched on a fence post right on the forest’s edge.  It was pretty calm and just stared at me when I stopped my car and walked back towards it.

It flew a couple posts ahead of me and I expected it to not let me get too close.  Then it flew just in front of me, crossing the road, and landing on a post on the other side of the road right in front of me.  I was using a long lens which meant I couldn’t fit the bird in the frame as it landed in front of me.  It is always fantastic to be that close to Great Greys.  I took a couple of steps backward and enjoyed watching as the owl scouted for the field mice and rodents touring through the long grass along the fenceline.

I thought the owl might dive into the grass as it stared down periodically for several minutes.  In the end, it chose to fly off for a higher branch.

Too close to get a clean shot but I like the intention in the owl’s movement and its eyes.

A last stare (disapproving? menacing?) before heading further down the road. 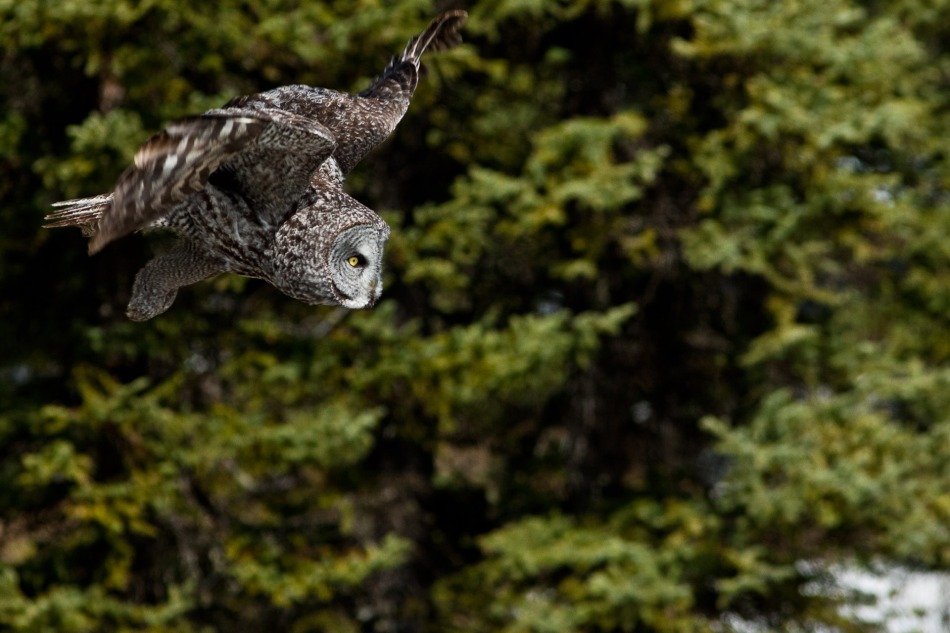 I spied this owl perched out in the full sun at the edge of a stand of trees ringing a lake in Priddis, about 30 miles west of Calgary.  I set up a couple dozen yards on a hill so that I was at the same height as its perch. 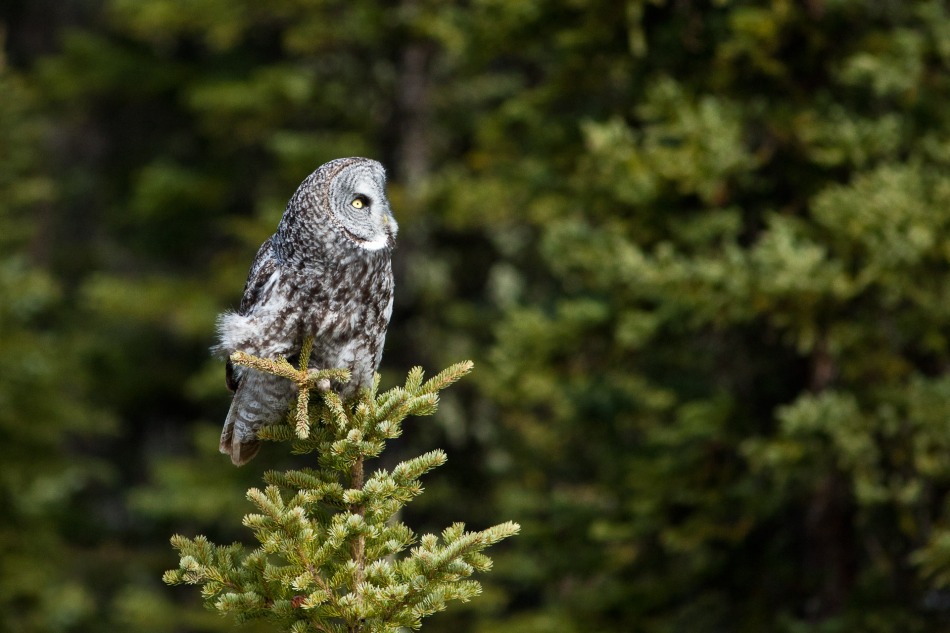 The bird was in no rush and waited for about 20 more minutes before launching out of the tree.  The vole or some similar creature must have dipped out of reach as the owl touched down but flew up again into this bare tree.

I left it staring intently across the field, I’m sure it didn’t miss the next one.

Strix Nebulosa – an evening encounter with a Great Grey Owl

On my drive home last night I spotted a large, oblong shape perched on a tree branch just off a gravel road on the forest’s edge near Bragg Creek.  Going at highway speed and being a couple hundred meters away from the object, I wasn’t sure what it was but I quickly turned around hoping that it was an owl of some type.  When I pulled up the gravel road, I was very happy to see it had not yet flown away.  I grabbed my camera, a telephoto lens and a flash and walked slowly towards the bird.  Even in the failing light, it was easy to identify my new friend as a great grey owl.  I kept the flash off as I approached giving the owl time to get used to my presence and decide if it wanted to model for me.  Great greys are mercurial, one encounter they will fly away as soon as they see you, another time they will stay but keep their eyes away from you.  This was one of the great encounters where it allowed me to come close and was not agitated.  At one point it flew away but then circled around me and came to land on a fence post about ten meters from me.  I photographed this beautiful creature for about fifteen minutes and then left it to continue its wait for the ground creatures to start their nightly forays into the open.

Perched on the top of a tiny branch this is where I first found the owl.  Given the size of these birds (wingspans average 1.4 meters), I’m always surprised when I see a visible demonstration of how light they are (average of 1.2 kilograms).

I thought the owl was leaving here but then it banked to the right and landed on the fence post across the gravel from me.

At this point, it was quite dark and the colors in the scene were restricted to blue hues and gray tones.  I turned the flash on to capture the brown color in the feathers and the yellow in the eyes.  The image I wanted to finish with was of the owl flying where you could see the motion and power in its flight before finishing the shoot.  I used a slightly longer exposure to get movement in the wings and panned with the owl as it launched and flew past me.

It doesn’t always turn out but when I can create the image I’ve imagined in my head it is a good day.  This is pretty close to what I was trying to capture in the photograph.  Thank you to Bobbi for managing the three-ring circus at home for an extra while longer last night to let me play with an owl for a little bit.