An evening with an old friend

It has been a few months, since the beginning of winter, since I last had a visit with a great gray owl.  On Sunday night, a warm evening near Kananaskis, I found a pair!  Here is one as the light was failing and shortly before I left them to their hunting.  More to come soon. 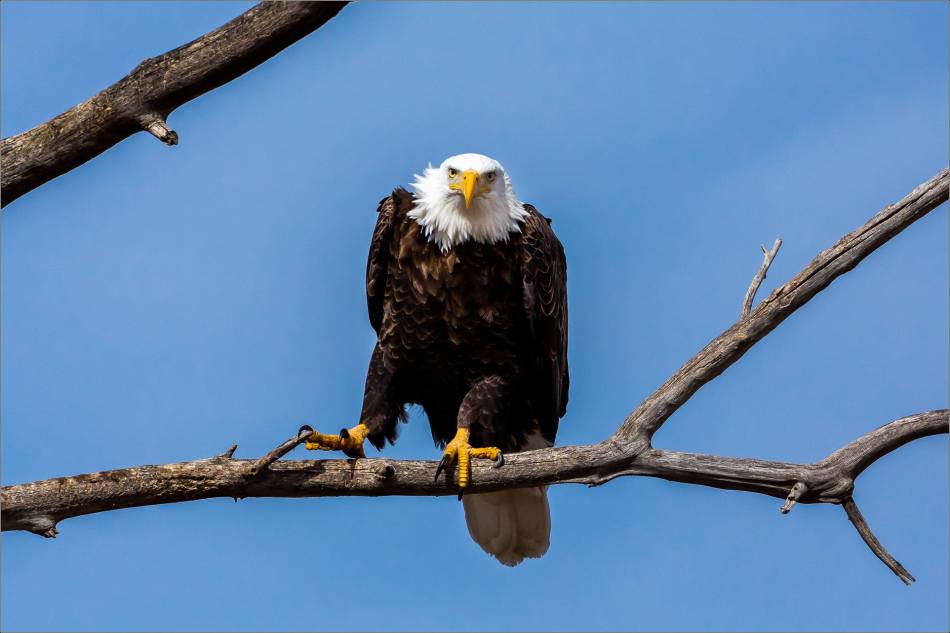 I found an aerie of four Bald eagles east of the Crowsnest Pass this weekend.  They perched in still dormant trees that divide up several farm fields.  From these perches, they can hunt for the ground squirrels that scurry between their holes among the short grass.  This eagle had just finished his meal and I caught him adjusting his position on the branch.  It looked a bit like a line dancing sidestep to me.

Reconnecting with the Snowy owls

I drove to High River yesterday and spent the morning touring the gravel roads looking for wildlife on the prairies.  My hope was to find a Snowy owl as they have begun returning there.  An hour after sunrise, east of Frank Lake, I spied a beautiful owl perched on a fence line and I spent the next four hours watching it sit, fly, hunt and then sit.  A lot of watching while she dozed or scanned the surroundings but it was time I enjoyed completely.  I wanted to share this photograph of the bird from the early afternoon when she landed in a field and was surrounded by sticks left behind after the last harvest.  I am excited to share more from the day and will soon.

This coyote didn’t seem impressed with the storm that tore across the Foothills on the weekend.  The front of the blizzard was pretty wet so when the temperature started to drop, everything built up a layer of ice.  I suppose this creature didn’t feel like trotting around with the extra weight, and the blinding snow, so it laid down and burrowed in.  It was resolute to stay put and only watched me as I set up my camera and lens for this picture.  Most coyotes will perk their ears so I wondered if this one may have been injured or sick.  However, I went by a couple of hours later and the coyote had moved on.  The storm was still raging so maybe dinner had called her to action.  When I’d seen her earlier, I thought she might not leave until the weather improved considerably.

Just before the long weekend, I had an evening free to tour the back roads around Bragg Creek.  As the shadows grew longer and the heat of the day softened a little, I hoped to see some wildlife come out of the trees.  A few miles off the main road, I saw a Great Grey Owl perched on a fence post right on the forest’s edge.  It was pretty calm and just stared at me when I stopped my car and walked back towards it. 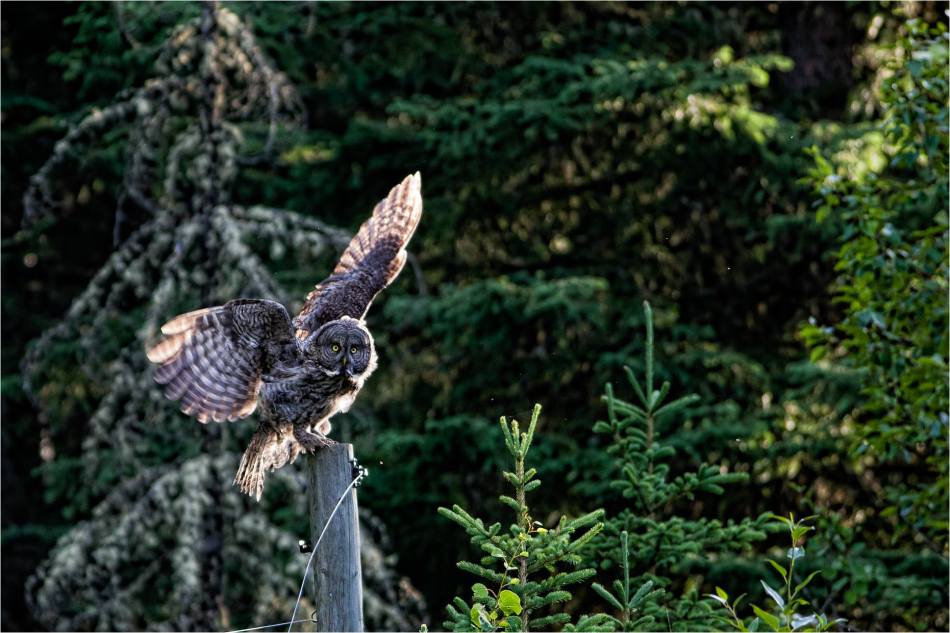 It flew a couple posts ahead of me and I expected it to not let me get too close.  Then it flew just in front of me, crossing the road, and landing on a post on the other side of the road right in front of me.  I was using a long lens which meant I couldn’t fit the bird in the frame as it landed in front of me.  It is always fantastic to be that close to Great Greys.  I took a couple of steps backward and enjoyed watching as the owl scouted for the field mice and rodents touring through the long grass along the fenceline. 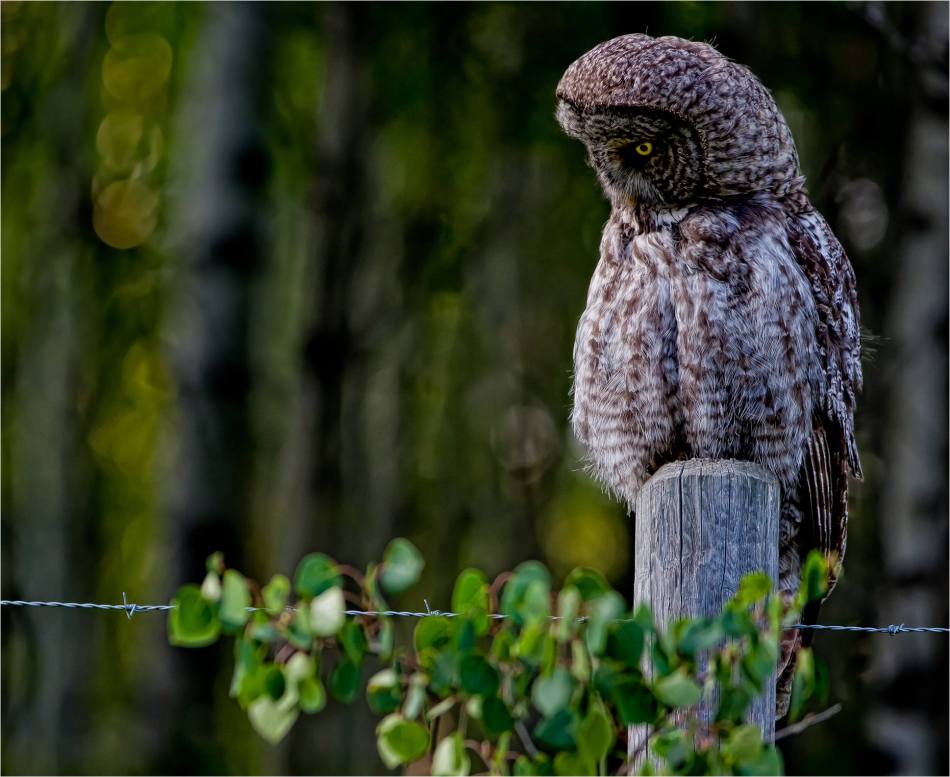 I thought the owl might dive into the grass as it stared down periodically for several minutes.  In the end, it chose to fly off for a higher branch.

Too close to get a clean shot but I like the intention in the owl’s movement and its eyes. 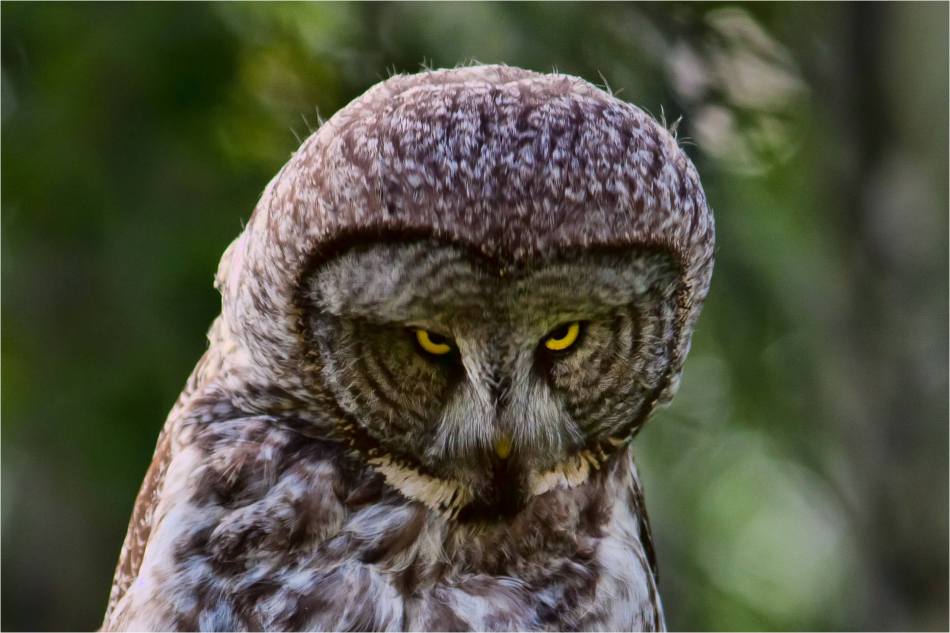 A last stare (disapproving? menacing?) before heading further down the road.

Owlets in their treetop fortress

Yesterday, while driving along the backroads between Bragg Creek and Cochrane, my wife and I noticed two fluffy balls popping up from a huge nest that I thought was still abandoned.  We could see from the edge of the road that they were Great Horned Owl (Bubo virginianus) owlets so we waited a few minutes to get a sense of that stand of trees and whether the parents were nearby.  I walked to the fence dividing the ditch from the forest and with a long lens coupled to an extender was able to get some nice images without getting these adolescents worked up.

Below is the view of the nest from the road

I have watched this nest for a couple of years and this is the first time I have seen chicks being raised in it.   I hope this pair make this a summer home and return every year.  Now, to see about photographs of the family together… 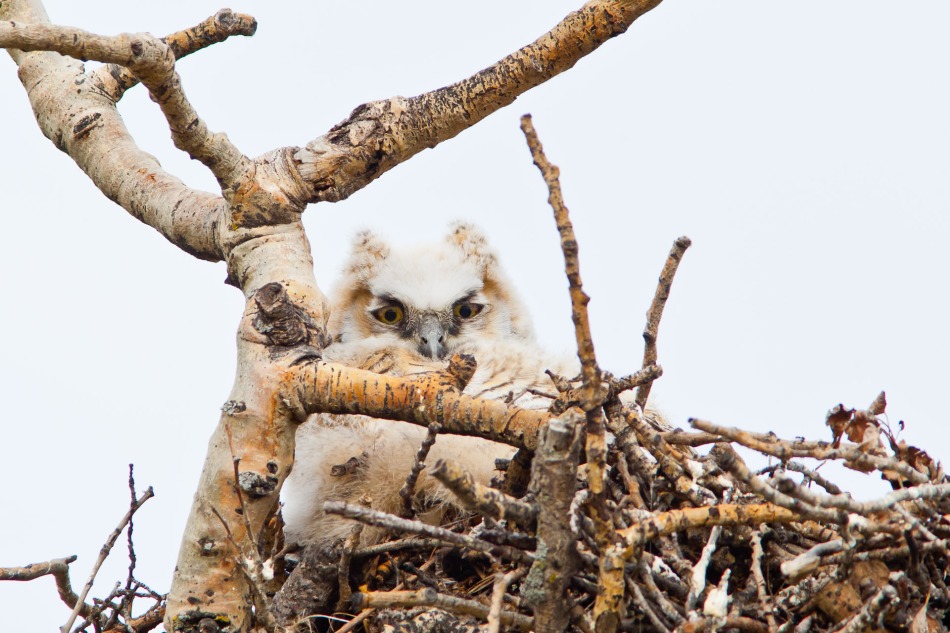