A bald eagle in flight with its prey 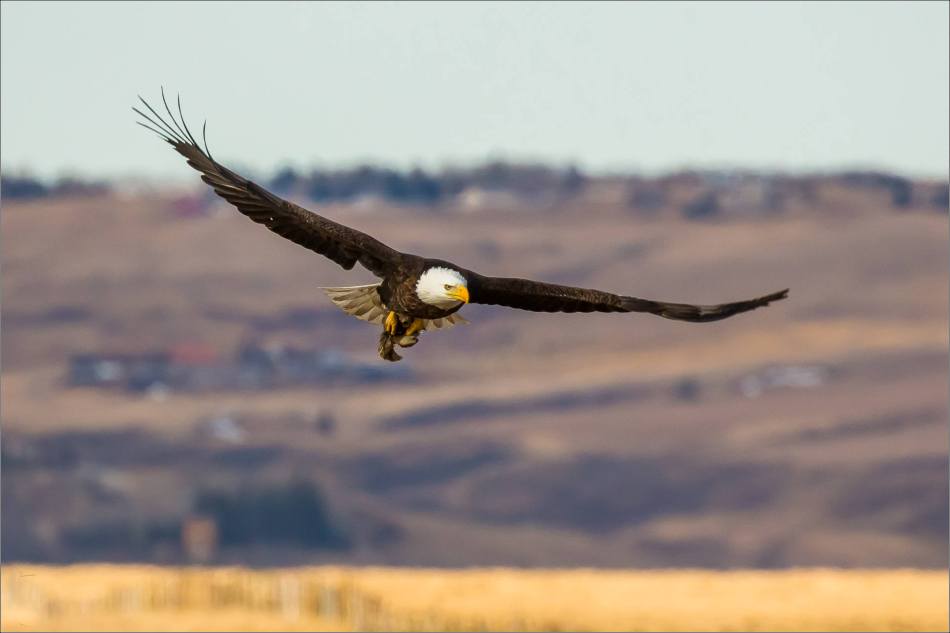 A few weeks ago, there were several bald eagles hunting for prairie dogs in the fields west of the Springbank Airport.  I’m not sure if these rodents were just coming out of their holes, the eagles were migrating through or something else was behind this congregation.  No matter why, the eagles were making hunting runs on the far side of one field at one point in the afternoon.  One of these saw one eagle fly back towards where I was standing.  That provided a great opportunity for a few in flight shots.

This eagle flew past me and far beyond before landing so I did not take any photographs of the meal.  If you are interested, I have posted here previously of another eagle from the same day that I found eating from a perch in a tree.  I realize that may be unappealing – but some people are interested.  Either way, here are a couple more of this eagle as it passed overhead. 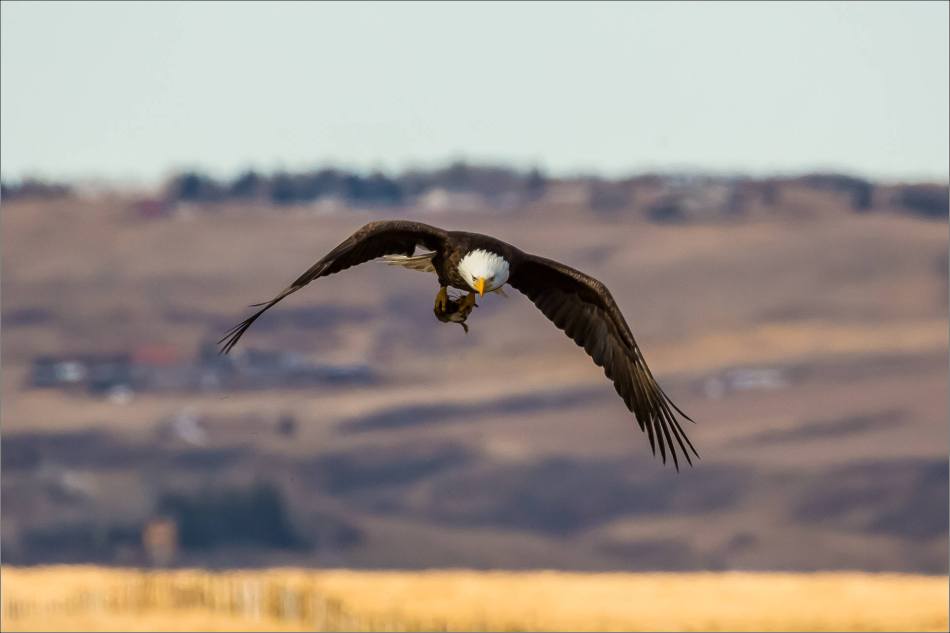 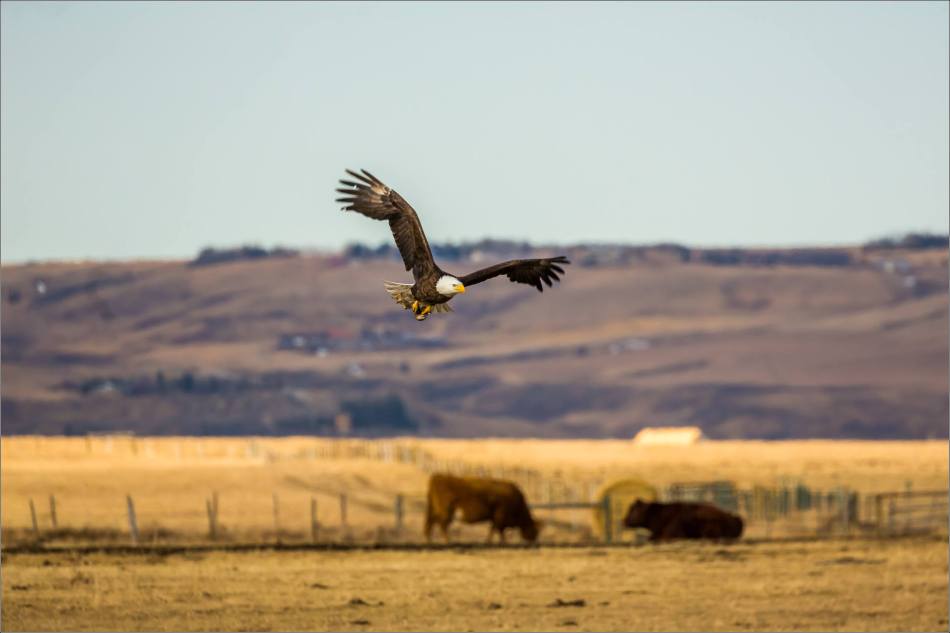 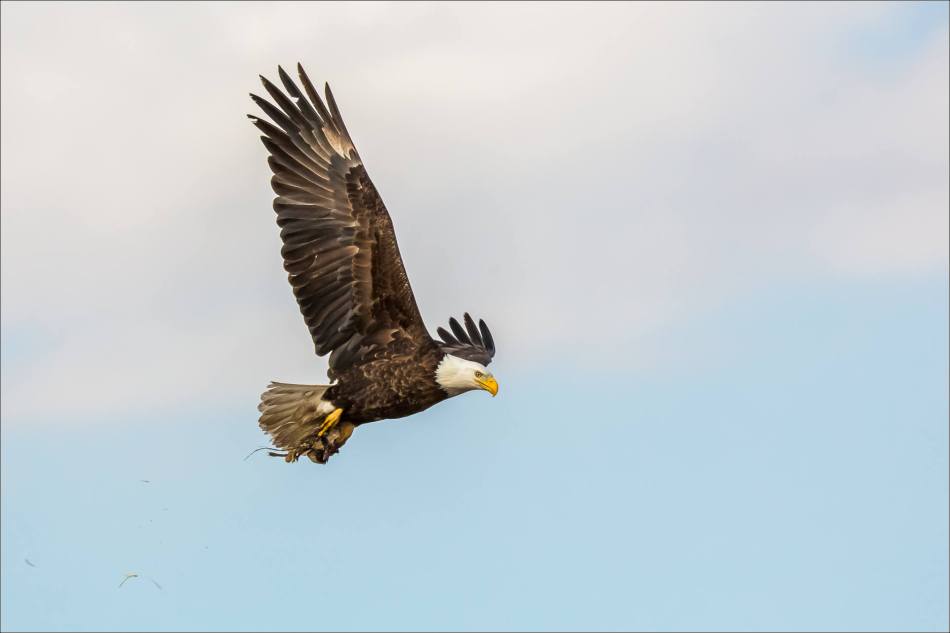 The blizzard tailed off this afternoon and I went out to see how the fresh blanket of snow looked laid over the prairie. With the clouds wrapping up the sun, I headed home and passed by this moment in the wintry outdoors.  The mother and child appeared to be engaged in a good conversation but a wave seemed to earn me a quick smile.  They were traveling along the Cowboy Trail (Highway 22X) so this slightly unusual scene seemed rather appropriate.

Photographing through dawn on the prairies

I spent a morning photographing the sun rising over the prairies west of Calgary on the weekend.  In the image above, the alpen glow to the west heralds the sun’s coming approach.  When the sun came up, the pink quickly washed out of the sky and painted the eastern flanks of the Rocky Mountains and then these stands of trees that break up this field along Highway 8.  I love watching these transitions as colors deepen, fade and change altogether.

Facing a low sun, shadows stretched out long across the snow.  I played with those for a bit under the increasingly blue sky before heading home.

Nanton is a small town along the Trans-Canada Highway close to an hour south of Calgary.  I stayed out overnight on the prairies just east of town for some solo photographing.  A storm was fading at sunset but not enough to let any color show through the clouds so I did not make any interesting images before nightfall.  In the middle of the night, the Aurora Borealis came out in subtle fashion and that got me out shooting from then through sunrise.  I will share some of the Northern Lights images soon but wanted to first share some of the photographs from before dawn.

I love the skies on the prairies and this morning’s canvas was beautiful.  I traveled along the gravel roads and found a couple of nice locations.  The layers of clouds caught different colours through the morning and I had fun composing those against silhouettes from the land. 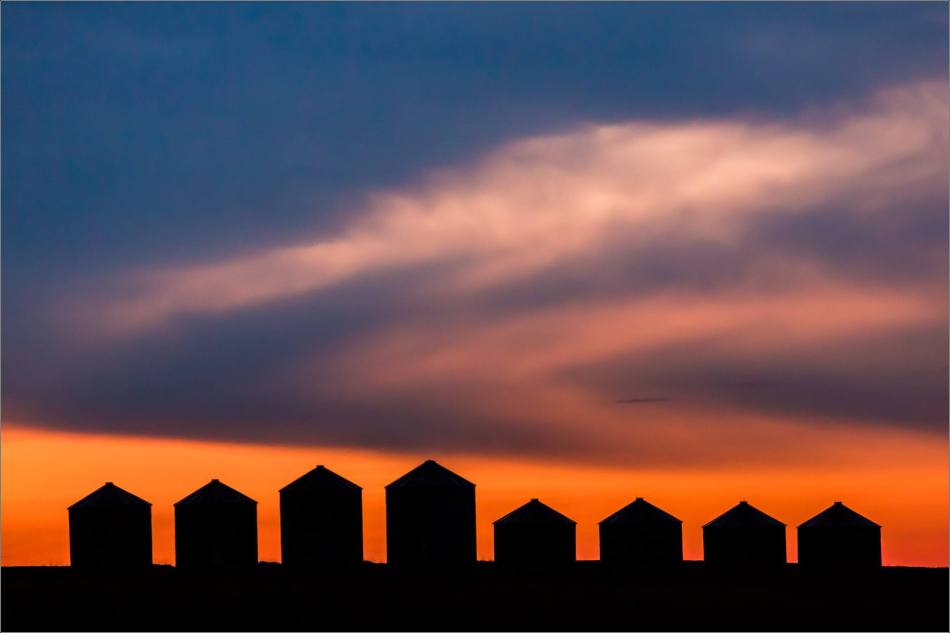 A bull at sunrise 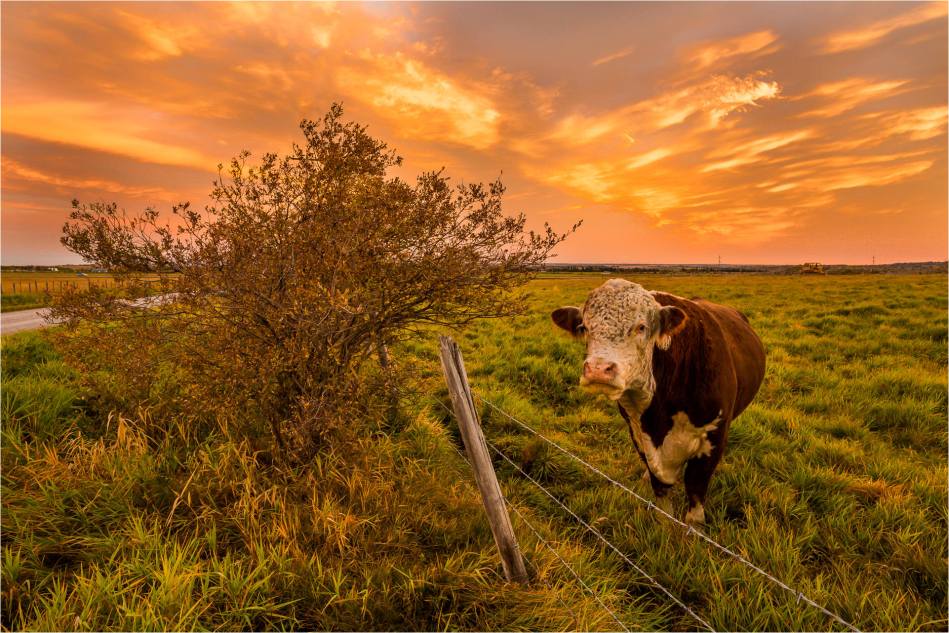 The early morning sky was beautiful this morning.  I stopped for a while to watch the clouds move from the pinks and purples to the reds and oranges and then into the yellow and golds.  This bull was not impressed by any of that – he was calling from his solo field to the cows in the field across the road.  He stared at me at one point and that worked for me.