Leaping Tiger Gorge – a legendary canyon below the Tibetan Plateau 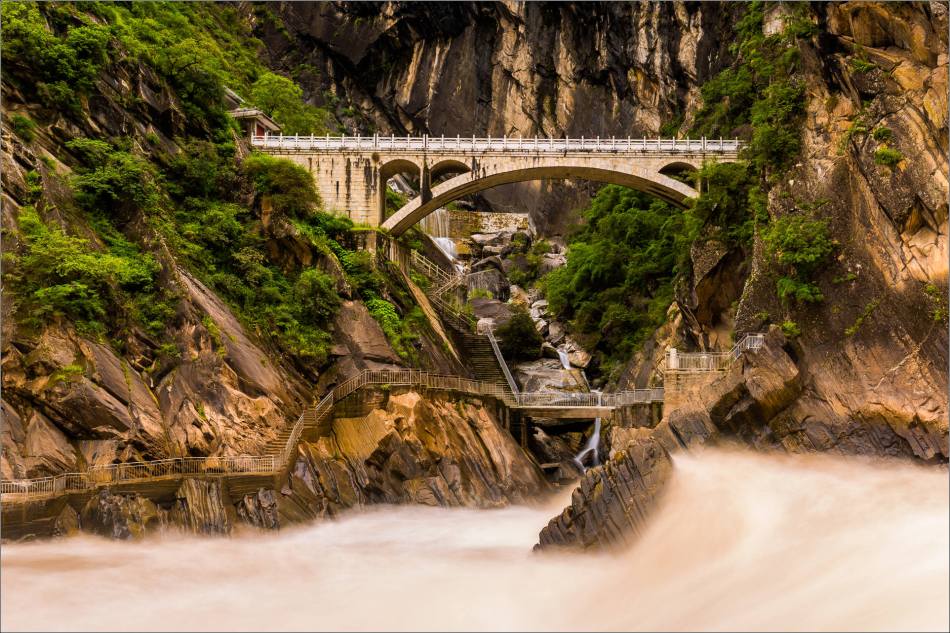 The Leaping Tiger Gorge is a deep canyon created by the Jinsha River whose headwaters are in the Tibetan Plateau is the upper course of the Yangtze River.  The water volume is immense and with the amount of ground carved away always runs a earthy colour.  The color is repeated with some of the ripples in the rock exposed between the water and the edge of the forest which traces a ragged line above the river.

There is a visitor site that is interesting and allows you to descend several hundred feet down to the river level.   The legend holds that a tiger was once seen leaping across the gorge.  At a minimum distance of 82′ (25m) that would have been amazing to watch.  Being able to feel the spray off of the rapids and hear the roar of the water up close was beautiful.  I think I will remember my time in the gorge for a very long time.

Vicki Alford made the excellent suggestion to include some imagery to show the river’s power.  I have included an image with a faster shutter speed taken from a viewing deck roughly halfway down the canyon. 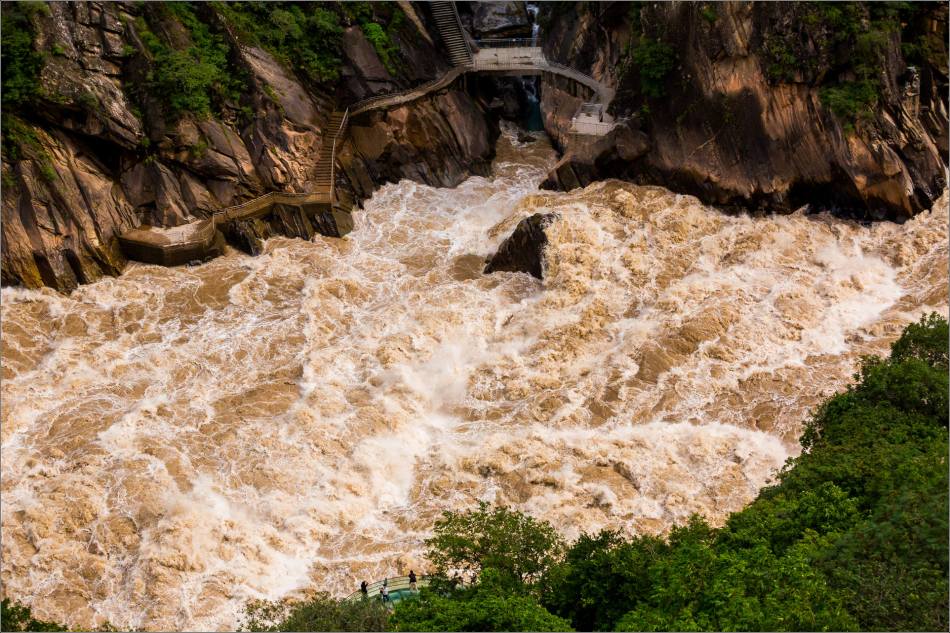 During the lunar eclipse last December I was shooting off the Centre Street Bridge in Calgary with the moon to the west of me.  As the moon came out of eclipse, I turned my attention to the east and photographed the sunrise over the Bow River looking east from downtown.

I wrote a short post on the eclipse the next day but then we left on vacation and I forgot about these images.  Looking through Calgary sunrise photographs in my library, I rediscovered these and put them together here. 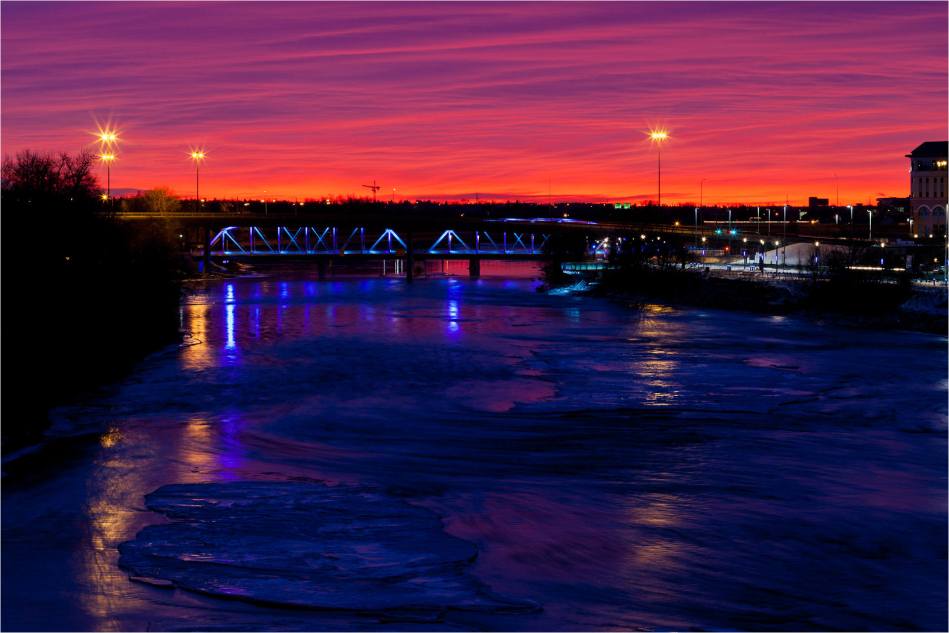 Inle Lake: Jumping up a step

A girl runs toward a friend along a stilt bridge on the edge of Inle Lake in Myanmar.  The bridge extends a couple of hundred metres into the lake to allow boats to dock year round regardless of high water during the rainy season or the opposite extreme in the summer.  There was a community of a dozen or more stilt houses and floating gardens at the lake end of the bridge so it no doubt serves as the primary link for these children to their school and friends. 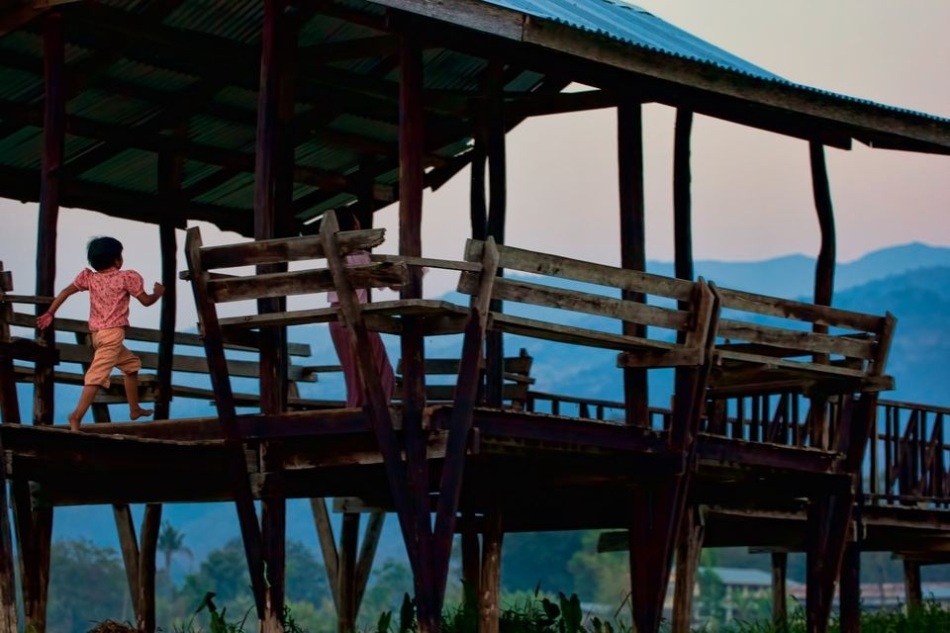 These two girls were laughing while running back and forth across the bridge.   I was there for the sunset but it was fun to have the youthful energy spilling all over.  I like the blue hues in this image contrasted primarily by the clothing of the girl who is jumping up the step.

2010 – My favourite photograph from last year

This is my favourite image that I made last year.  Simple composition, interesting patterns, good colour and a great memory behind it. 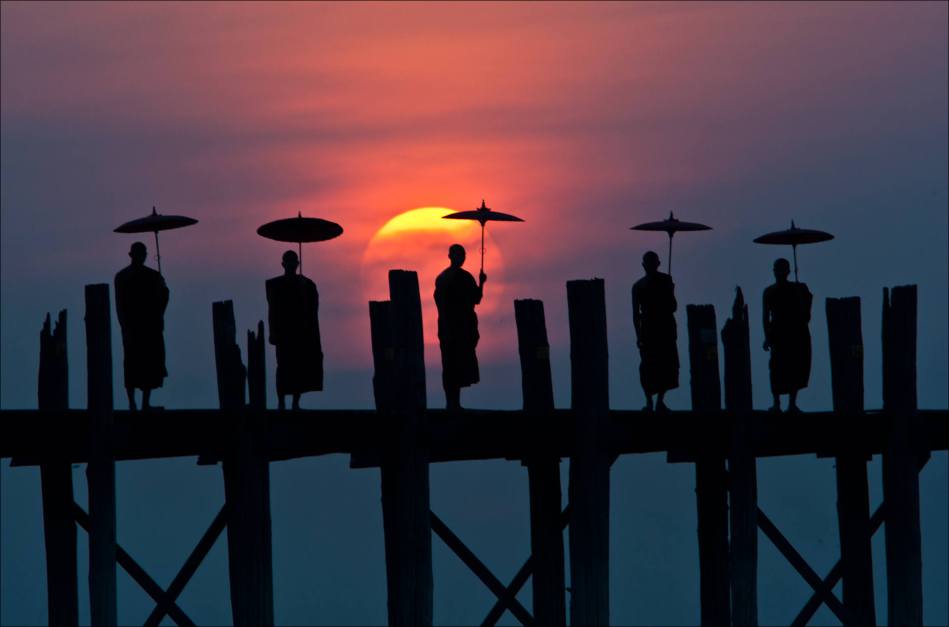 These monks worked with our small group on and around the U Bein Bridge in Amarapura in Myanmar.  We had gone to their monastery and spoke with the Abbott and then with these monks about the photographs that we wanted to make that afternoon.   They were interested to see the end result and really cooperative through the whole time.

The footbridge runs 3/4 of a mile long and is made of teak columns salvaged in 1849 under the direction of the mayor at the time, U Bein.  He got a bridge named after him and the people got a way to cross Lake Taungthaman from Amarapura to an island in the middle.  The traffic is steady in both directions in the afternoon and into the evening with school children, workers, families and monks crossing on foot and bicycle. 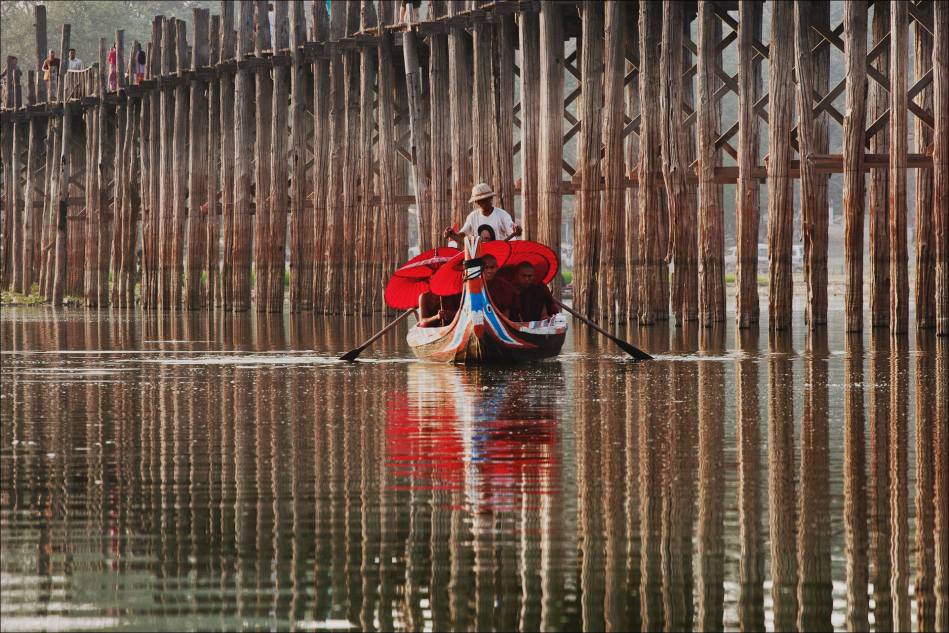 Our guide, Win, used one of the boats that take tourists for a float along the bridge to ferry the monks to a small spit of land about halfway between either end of the bridge.  At this time of the year, in February, the water is low enough that there are a couple of places that stay above the waterline around the bridge.  In the dry season, I was told the lake can be almost empty.  In the wet season, the water has been higher than the walkway!  I hope to get back to see either of these extremes.  From the little island there is a set of stairs that lead up to the bridge deck.  The monks and our guide went up and our group of four photographers headed away from the bridge to frame the scene the way each of us were imagining.   The sun was dropping slowly at that point and I was starting to get excited because the light was warming up and I was hopeful that we were heading towards something special.

The scene on the bridge was chaotic and our guide was busy explaining to the people lingering around what we were up to, why the monks were standing between the pylons and when we were hoping to get a break in the traffic.  The crowd built up slowly but everyone was patient and seemed to enjoy watching us waving and shouting back and forth to get the men on the bridge in place.

Win was fantastic sharing what we were doing with the people as they waited, and they in turn were great, waiting for about 10 minutes on both sides while the sun fell in line with the monks and the bridge.  It moved very quickly and as it did the gold colour in the sky gave way to blue and purple tones as the sunlight had to push through more atmosphere as well as the haze rising up from the water and the forest.

The photograph immediately before my favourite was fun because I had just changed lenses to a 300mm with a 1.4x extender to get as much reach as I could.  This was the first image where I was able to isolate the blue and purple section of the sky away from the golds and oranges.  That allowed these darker colours to really saturate.  That’s when I knew I had the background that I had imagined to frame the monks against.

The last shots of this scene caught the sun as it went under the bridge and then disappeared into the hillside across the plain.  From the moment where the sun was just above the umbrellas to where it is peeking under the bridge took just over three minutes.  It seemed much less as I was photographing the scene – a flurry of shooting, checking histograms and adjusting settings and compositions.  It was a very special opportunity so I was doing everything to make sure that I was getting the best that I could out of the moment.  A great memory of a wonderful place.