This shot of two bald eagles sparring in midair is one I have waited to capture for a long time. I felt extremely lucky to get this dynamic image with the wings flared, one claw wide open and the emotion in the top one’s face.

I have photographed bald eagles in many places over the years. They are dynamic, powerful, cunning, intelligent and emotional raptors who I never tire of watching at rest, in flight or on the hunt. This is one of my favorites of these incredible birds.

Eagles in the Columbia Valley

At the end of March, I had some time in Radium with my family.  I spent the mornings meandering along the Columbia River as well as some of the valley’s ponds and puddles.  This area of British Columbia seemed a couple of weeks further into spring than my home in Bragg Creek in Alberta.  Green was starting to show on the trees and in the grassland.  And on one lake, ice was still covering most of its surface. 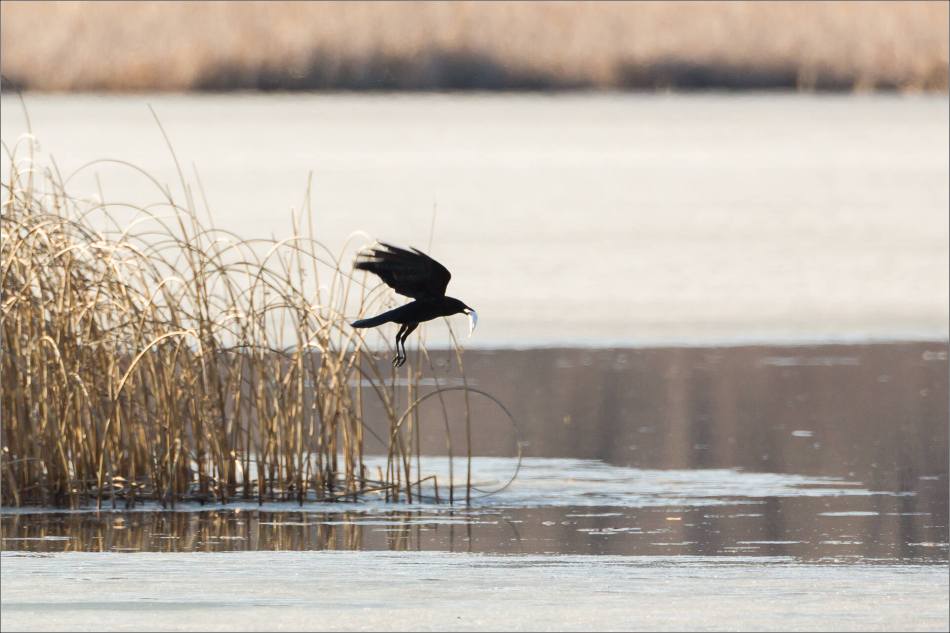 The open water offered fish and the ice had some kind of insect, slug or some such on it.  Ravens and bald eagles were drawn in by both.  Over a couple of days I had some great opportunities to watch both and their occasional interactions. 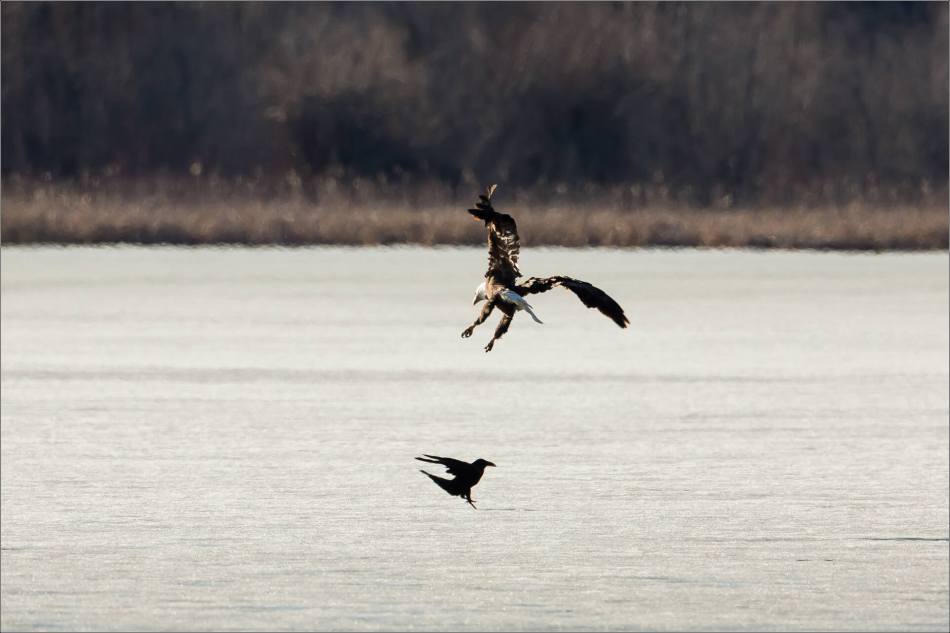 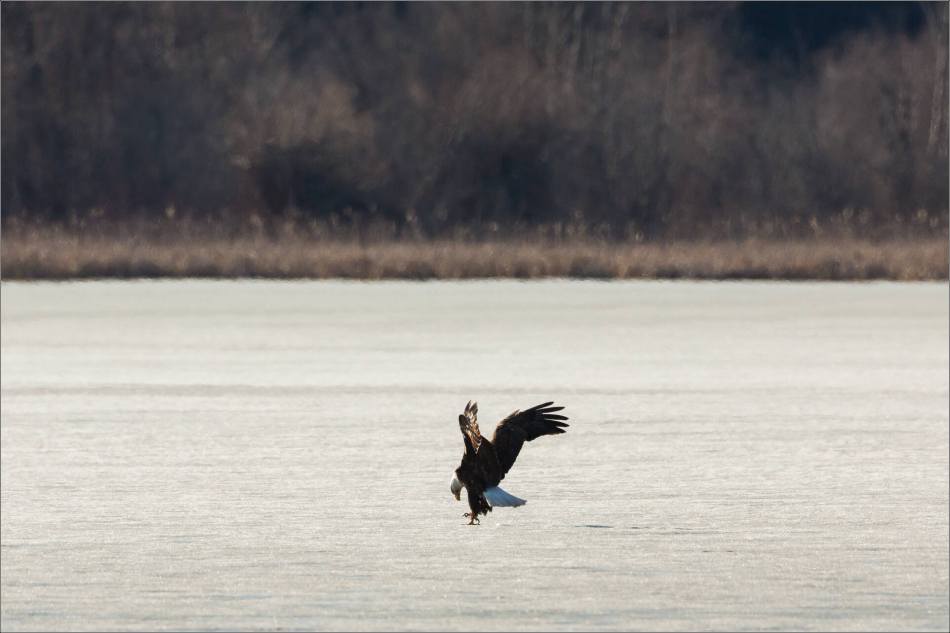 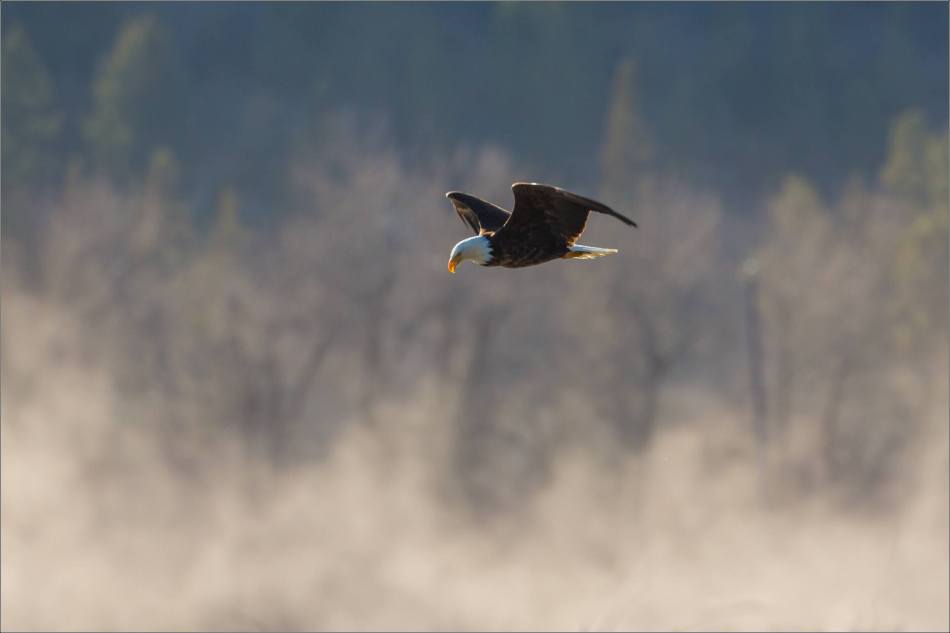 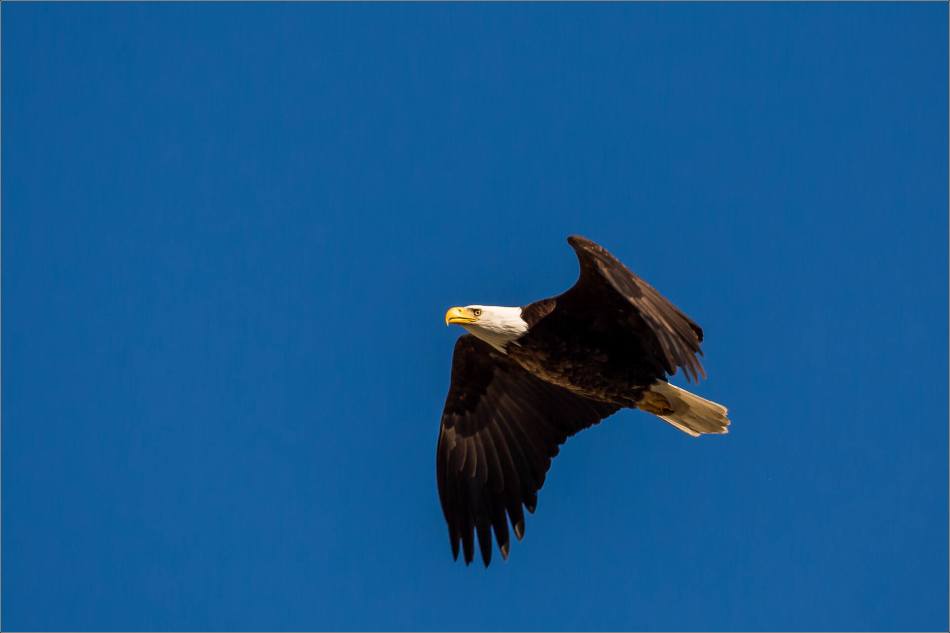 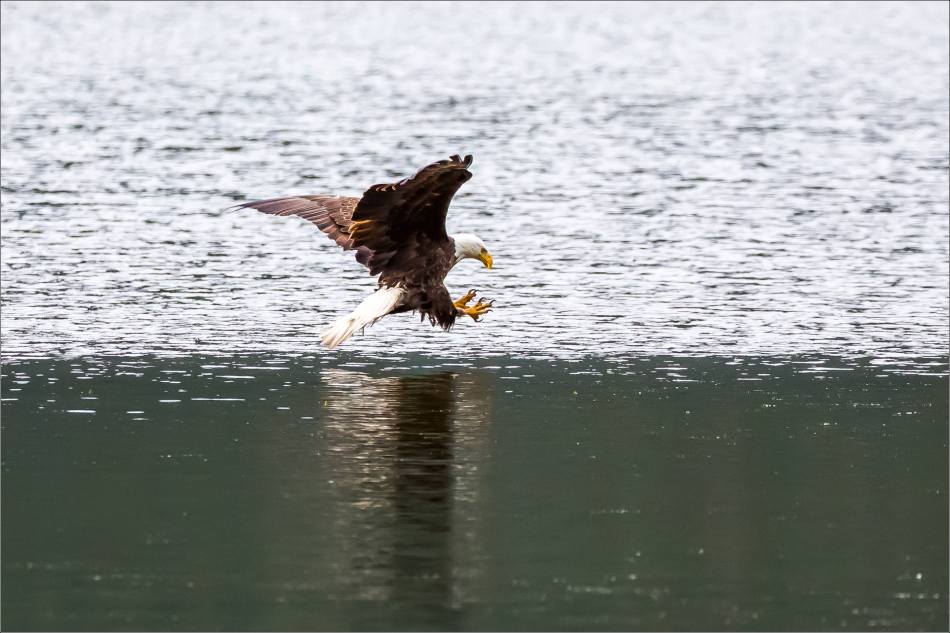 I watched this eagle glide across the Vermilion Lake from its nest on the far side.  Ahead of his arrival on the shore in front of me, waterfowl and a couple of Great blue heron scattered in all directions.  The eagle flew higher and circled a couple of times, staring into the water.  He dove, his claws slicing the water, but finding no joy.  The raptor pulled up into a branch of a dead tree to reconsider its approach. 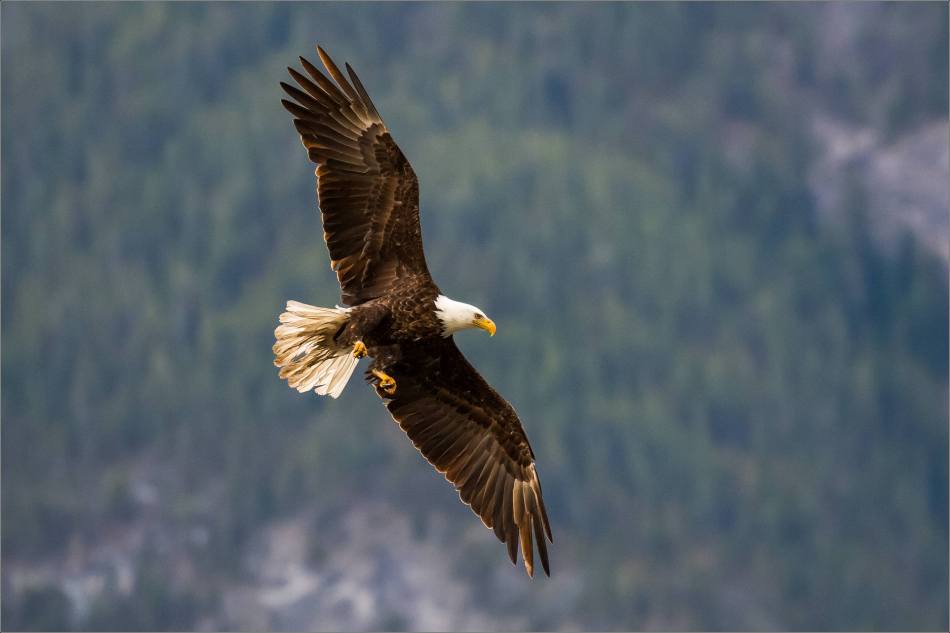 Twenty minutes passed before his second flight.  He flew in a wide arc, gaining a little more altitude.  The birds that had been on the water, had not returned so the eagle had a clean line this time.

He dove, again, and this time his talons came off the surface with a fish in their grasp.

The fish was quickly moved from talons to beak and then swallowed mid-flight. 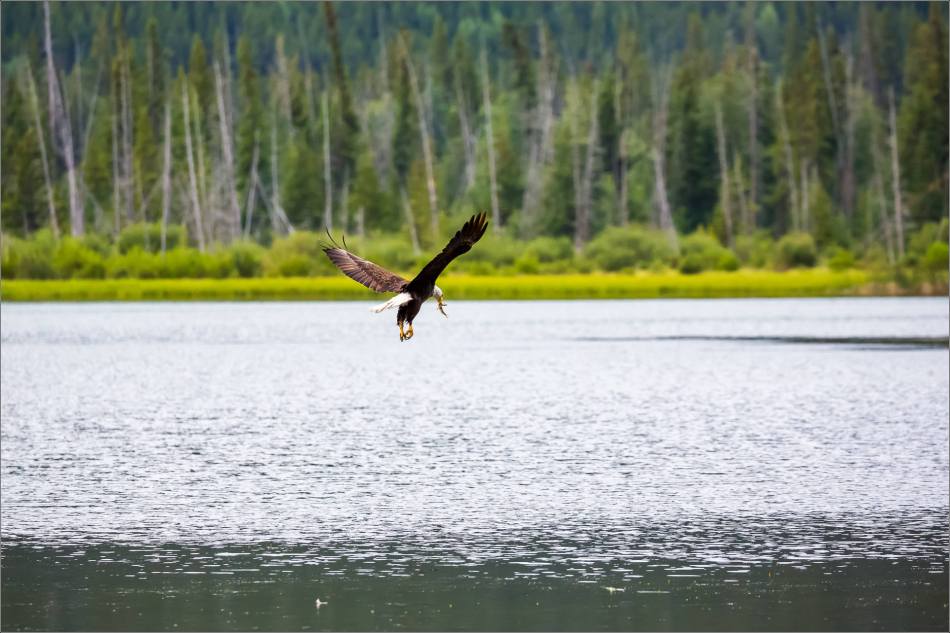 The eagle flew back up to the same tree and settled on a branch near where it had been pestered by the blackbird earlier.  From there, I hoped he would fish again and I waited for more than an hour.  Along the way, he called out a few times which gave some interesting head and beak positions to photograph. 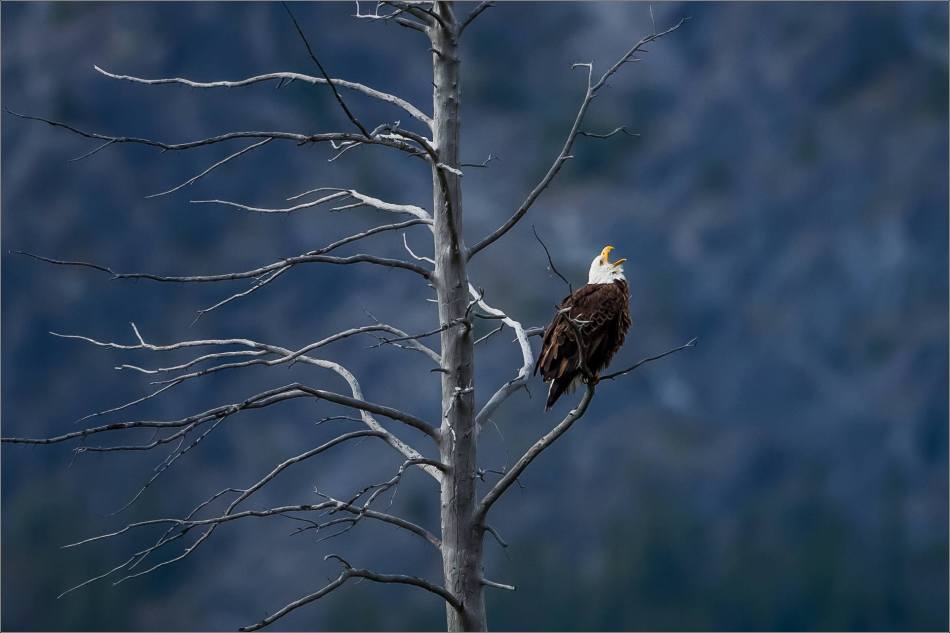 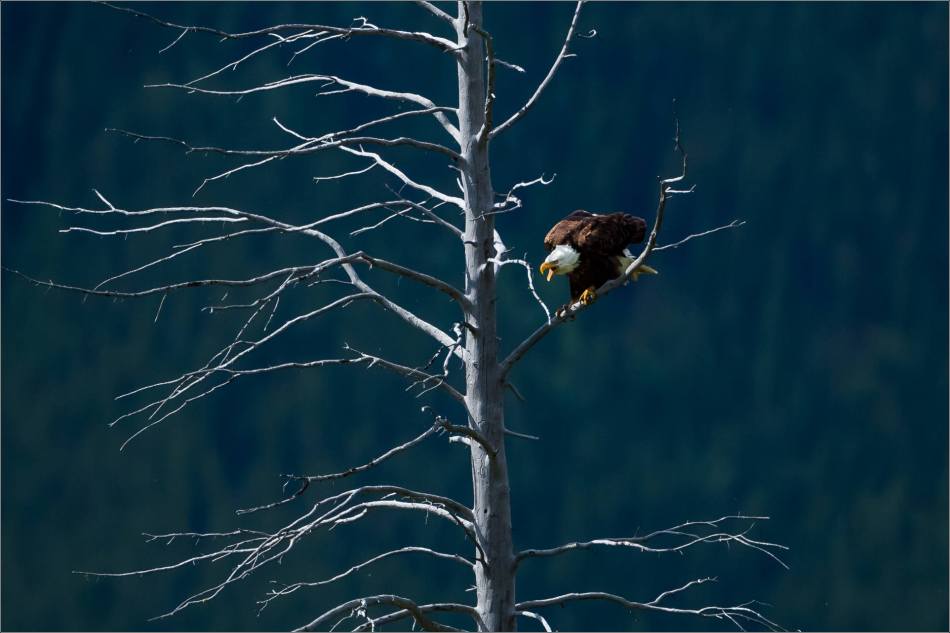 Watching these two eagles for an hour back in March, I am convinced they are the pair who will occupy the large nest perched in these trees over a pond on a farm on the high prairie east of the Crowsnest Pass.

Both had no difficulty catching the ground squirrels in the fields surrounding the pond.  When they did, they returned to this branch to eat – possibly for the company.  It was very cool to be a stone’s throw away from the wonderful creatures.  At close range, I was reminded how big these birds are.

Other eagles circled the water as well but none seemed paired up like these two which leads me to believe they “own” the nest.  I’ll get back there soon and see where things stand now! 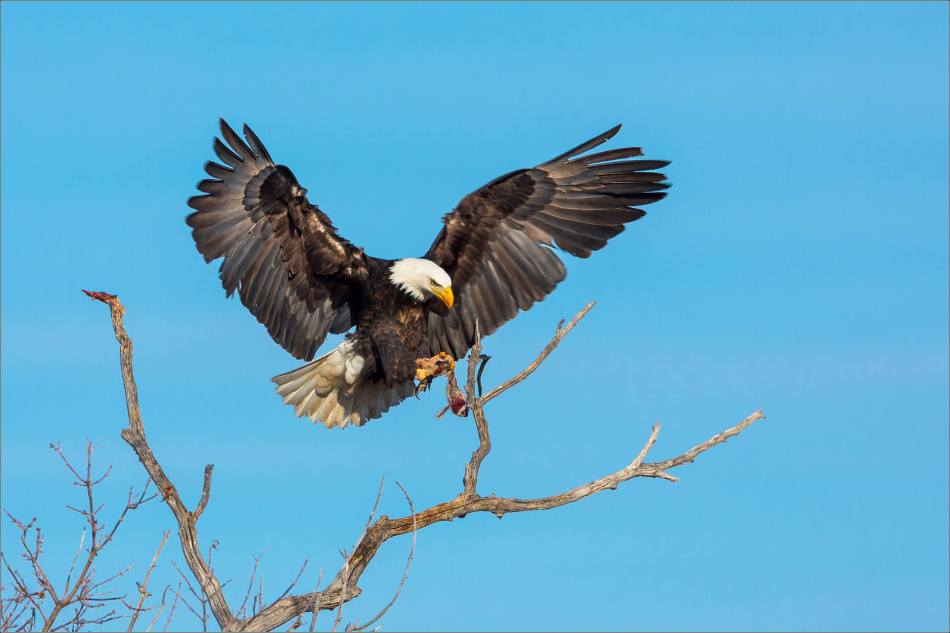 There were a lot of fun shots to choose from which I whittled down to these few here.  It was, obviously, a well spent afternoon by my standards. 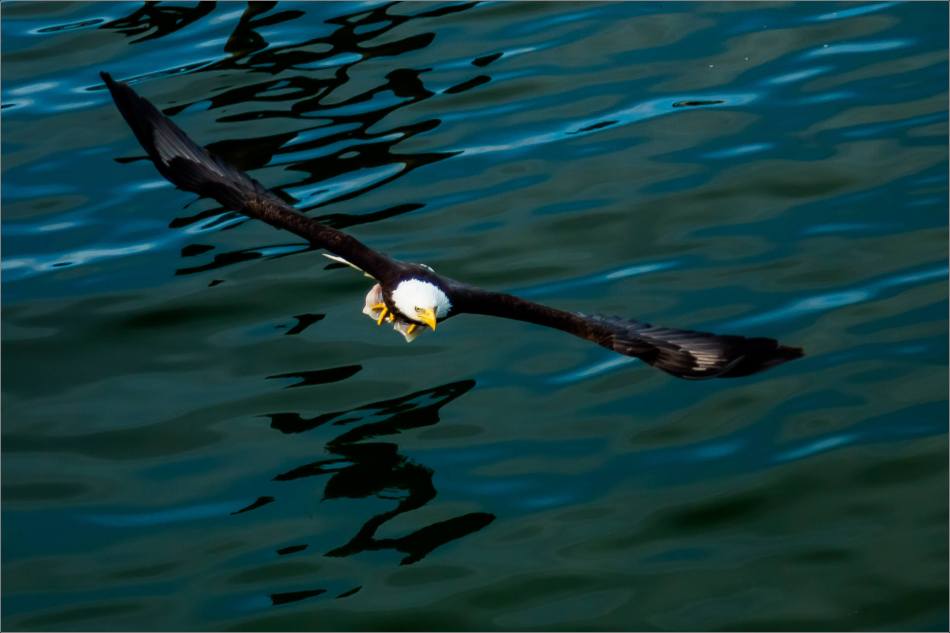 Eagles, owls and bears were chief among the highlights when I look back over my wildlife photography in 2014.  I spent time with Grizzlies in the Khutzeymateen Provincial Park, Kananaskis Country and the Banff National Park.  Eagles were often elusive, spiralling far above or banking around a corner, but I had great encounters in Prince Rupert and in the Great Bear Rainforest.  Closer to home, Great Gray Owls and Great Horned Owls let me find them now and then in the foothills and out on the prairie.

Beyond these animals, interesting and beautiful wildlife in Mexico, Arizona and around southern Alberta also grabbed my attention.  Taking a bit of time to enjoy recalling all of these highlights, I created a gallery with 45 images that meant the most to me.  If you are interested in having a look, please click on any image or this gallery link to open a new webpage with my collection of these photographs.  It was a good year and I’m looking forward to more exciting encounters, taking more opportunities to learn more about the animals I photograph and to keep learning to see deeper and to create interesting imagery that tells some of their stories. 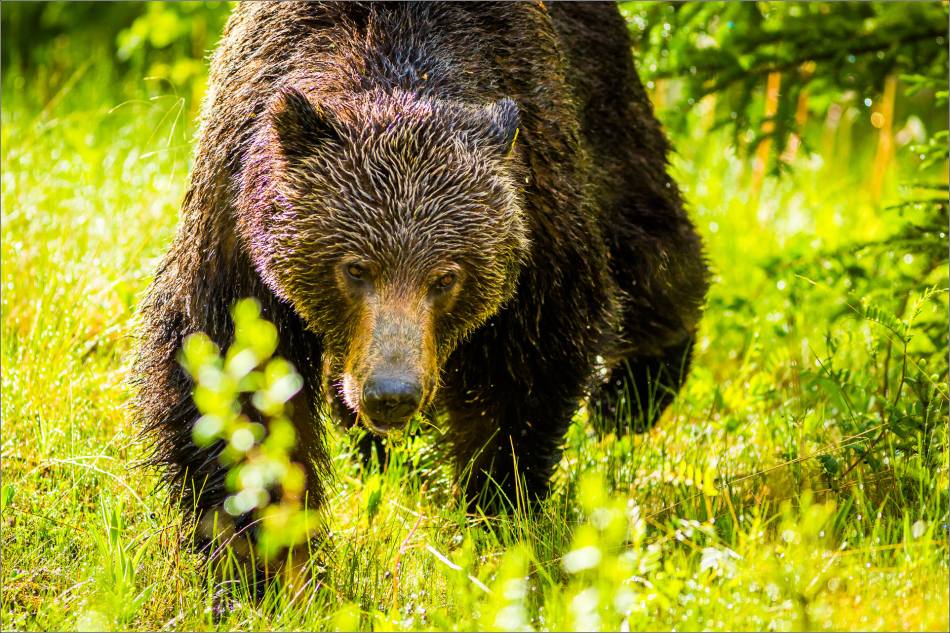 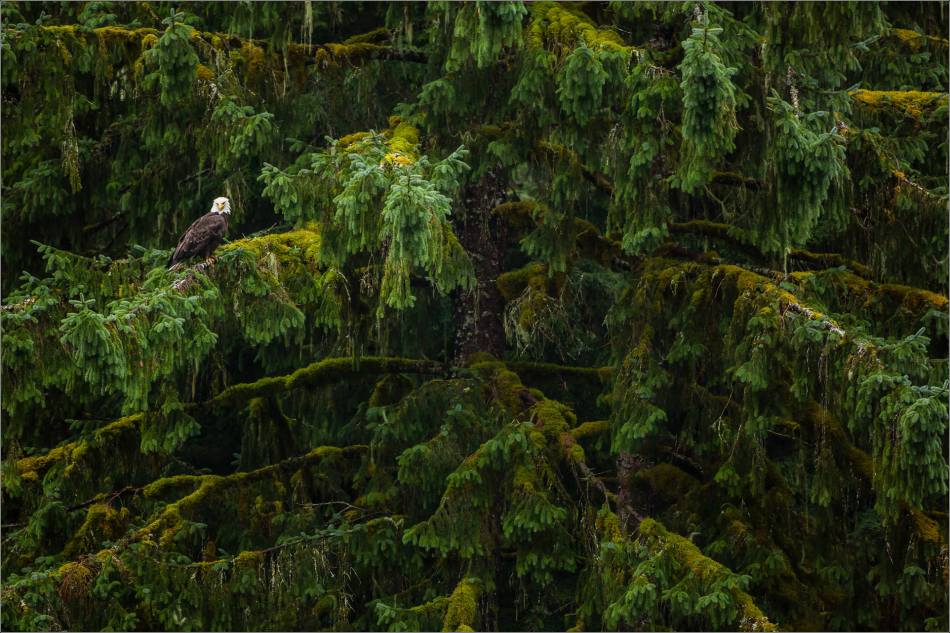 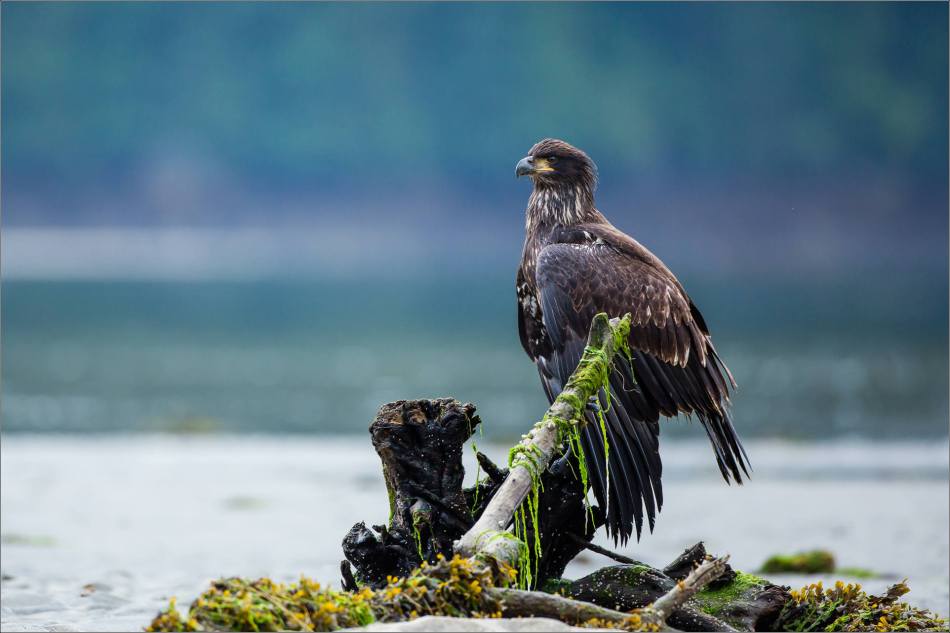 Eagles along the Grand Valley Road 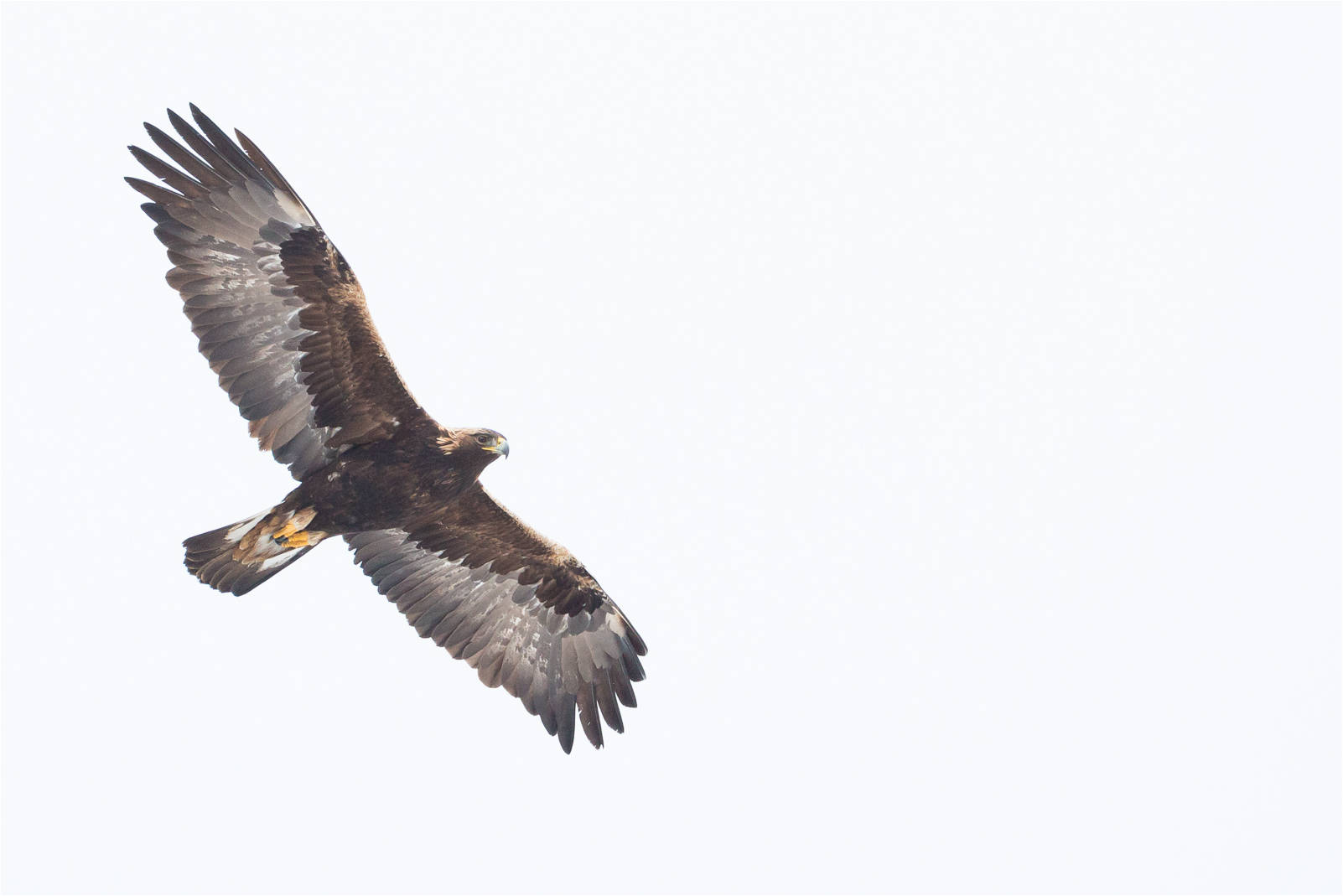 Our family went for a drive along the Grand Valley Road northwest of Cochrane a few days ago in search of raptors of any description.  This road is nice drive that is rarely busy and can often yield sightings of owls, hawks or eagles.  In a hilly farmland area we noticed a number of ravens circling around a stand of trees in a field a couple of hundred metres off the road.  When we pulled over to see what the focus of their attention was two coyotes bolted out from under a large cedar and sprinted across the open into the thicker forest on the far side of the field.  Looking back to the spot where they started running we could see a carcass that had been mostly picked clean of what, judging by one of the horns that was sticking up, appeared to be a bison.  As it was on farm land it seems likely there were bison being raised here but there were no other farm animals within sight to confirm that theory.  With coyotes, ravens, magpies and probably a number of other predators drawn to this unfortunate beast, its herd was likely as far away from this spot as the fences would allow.  So, we were watching the ravens which were squawking and pestering the smaller birds picking at the  scraps when Bobbi noticed a Golden eagle (Aquila chrysaetos) approaching from down the valley.

We already had the long lenses out so we were able to photograph the bird as it flew overhead towards the other birds.  Two ravens also saw the eagle inbound and flew up to harass this new attendee.  The three looped around the trees for a minute before the eagle landed in one of the high branches and the black birds returned to ground.

During this chase, the overcast skies took on a more threatening tone and soon a soft snowfall turned into a blizzard.  I thought the Golden eagle would wait out the height of the storm from the perch so I kept looking around to see if the coyotes, or anything else, came back.

Out of the sheets of snow a Bald eagle (Haliaeetus leucocephalus) swooped in and took up a spot on a tree near to the Golden.  This had turned out to be a great encounter and when a couple more Bald eagles flew in and around over the next half an hour, it continued to get better and better.  The snow did finally ease up and there were opportunities for nice flight images.

The lighter skies appeared to spur one of the Bald eagles to say goodbye to a raven it had been sharing a tree with across the field and glide over to the bison skeleton. 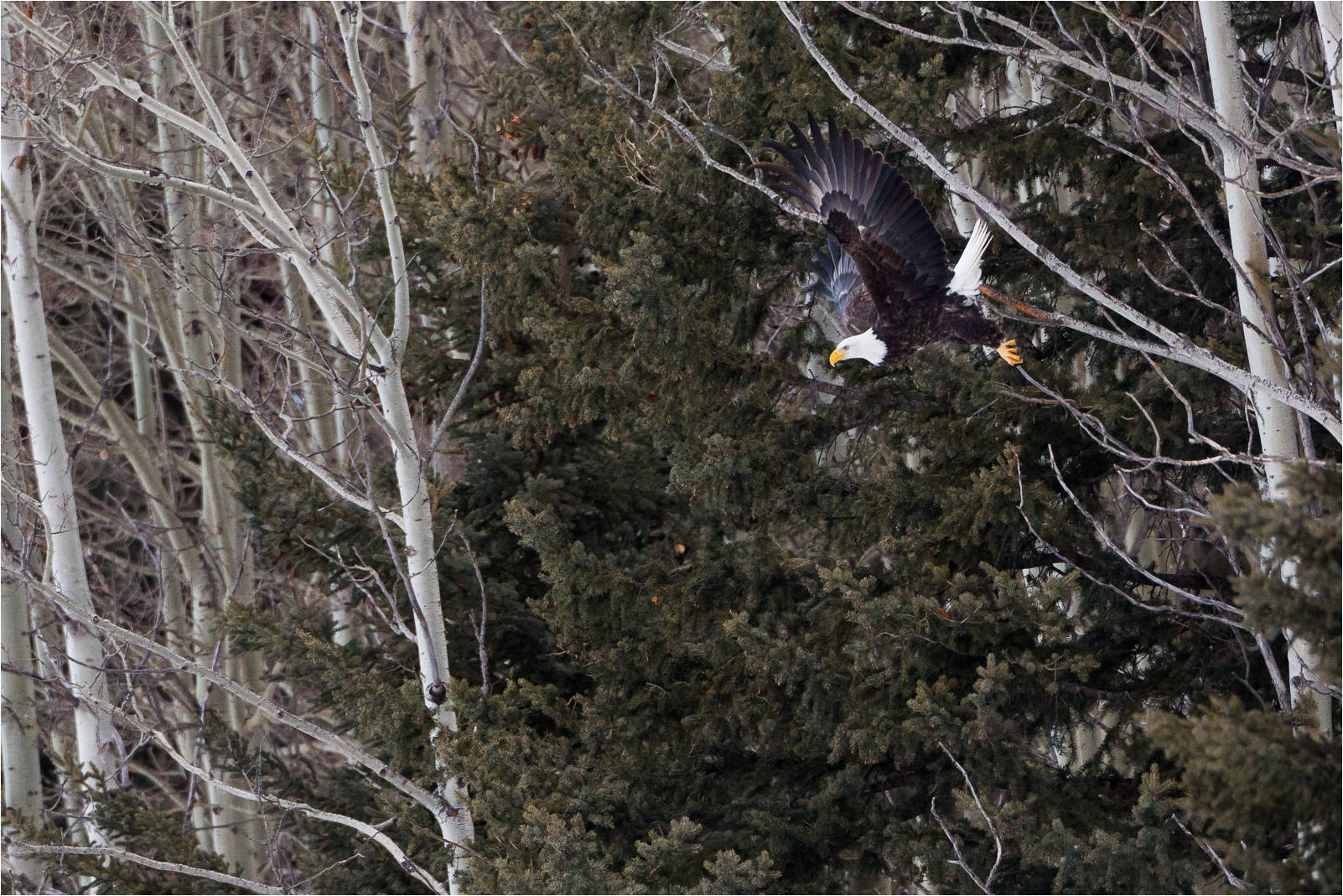 This eagle brought a good amount of conviction to its scavenging intent and it chased off all of the passerine that had been crowding on the ground.

When we moved on, this eagle was alone on the ground having successfully landed and taken ownership of what remained.

The Golden eagle had disappeared and two Bald eagles were perched where they could keep an eye on the bones.  The collection of black birds were scattered in singles and small groups around the scene though none strayed close to the eagle holding dominion on the ground.  The last wildlife we saw as we drove away were the coyotes trotting along the hill towards the farm-house keeping their distance while still keeping an eye on the bison.