A dance with Sandhill cranes

Sandhill crane couples dance with each other.  I found this pair in a field west of Bragg Creek and was lucky to be able to watch them.

A few Canada geese watched the dance as well.  They seemed to watch with little interest.  Far less than me.

I was at my daughter’s dance recital this morning.  She had a lot of fun during her performance and we had even more watching her.  We were able to enjoy a number of enjoyable performances.  The image above, taken just before the stage lights came on, reminded me why I like photographing so many events with a 70-200mm zoom lens.  I saw the dancers getting into position and dialled in the exposure to create silhouettes.  The image below was the first shot where I wanted to catch the moment before the dance started.  Above, with the overall scene photographed, I tried to work into it and find a more compelling composition.  Within the frame as David duChemin and others have discussed eloquently on occasion.

I previously posted about the Tsuu T’ina Nation’s Annual Pow Wow and Rodeo event that I attended in July.  Now that we are almost into September, I took some time to work through the stack of images that I made while I was at the Pow Wow.  There were great characters, incredibly ornate outfits and a wonderful cacophony of color – it really was a lot of fun for everyone.  For photographers, there was a lot to work with and the opportunity to make some interesting, beautiful photographs.

I choose two main types of images that I wanted to make.  For one, I wanted to get sharp images of the regalia and the people.  Beyond documenting the event, I wanted to show some of the emotion and purpose that the people put into their dancing.  With the second type of images I wanted to convey the motion of the event.  All of the dancers moved in a clockwise direction around the central supports of the Beaver Dome.  There were upwards of a couple of hundred children and adults moving around the circle and within this path, performing their particular dance.  The swirls of color grabbed attention as the dancers and their dancing outfits traced out their stories in response to the drum circles and chanting.  I started out at floor level using a wide angle lens (Canon 17-40 F/4) to be in the middle of the scene and then went up to the sound booth, had a good chat with Jim a sound technician from Hobbema, and spent much of the afternoon using a longer lens (Canon 70-200 and 300 IS) from up there.  I wanted to get higher so that I could shoot downwards and keep the bright daylight outside from spilling into my shots.  The Beaver Dome is an open sided building so during a sunny day, the outer edges show up as very bright, very wide horizontal patches of white in the background of your images if you are at ground level and facing outwards.  Going higher, allowed me to have other dancers, the carpet and the crowd in the background instead.  Adjusting the aperture, I was able to choose whether to have these background elements in focus or blurred into abstract.

The two types of images required two different techniques.  For the sharp images of the people, I used short exposures with a high ISO to freeze the action and minimize any blurring.  With the relatively dark lighting inside this often worked out to 1/40 second and 1/80 second at F/4 with an ISO 800.  I put up the shutter speed to 1/160 and 1/200 a few times just to make sure I had sharp images in the bank but, back at the computer, I have been happy with a number of the relatively slower shots that allowed more light in so the colors could really pop as they did when I was there.

Conversely, longer exposures To capture the motion, ended up being between 1/4 and 1/15 seconds using an ISO range of 100-400.  I kept my aperture mostly locked at F/4 as it was working to separate individuals from the surrounding crowd and distracting background elements while keeping most or all of the person and their regalia in focus. 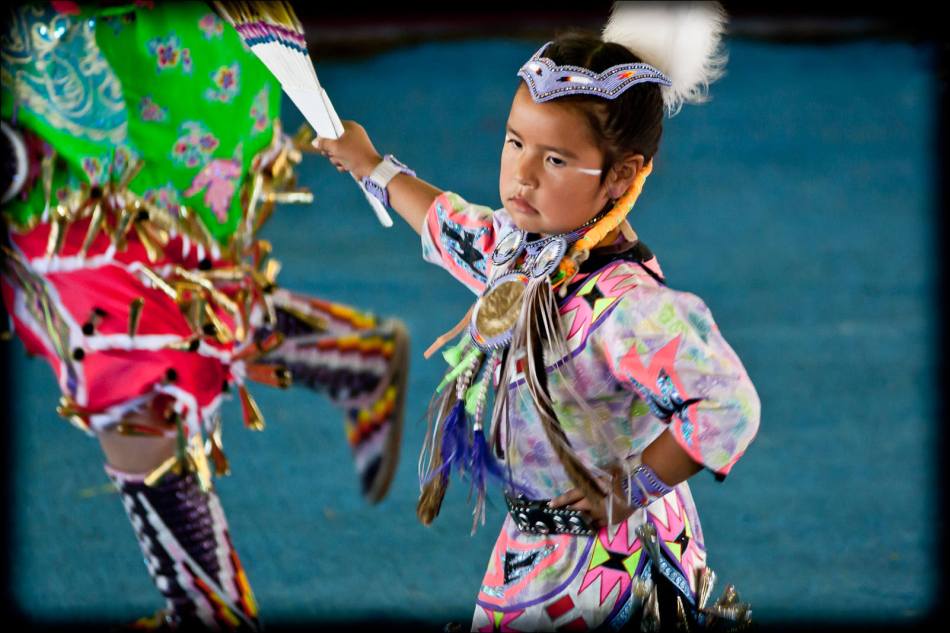 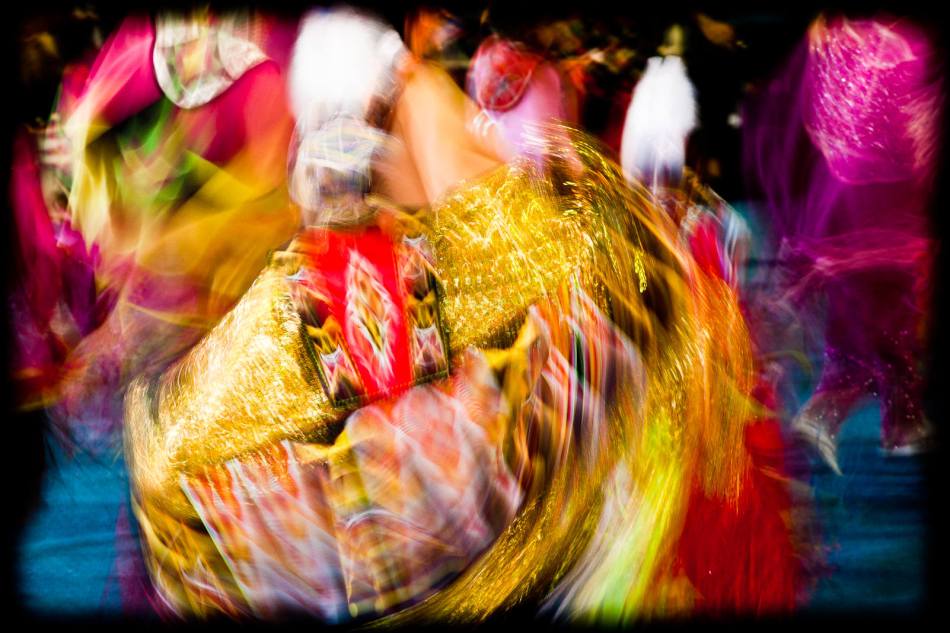 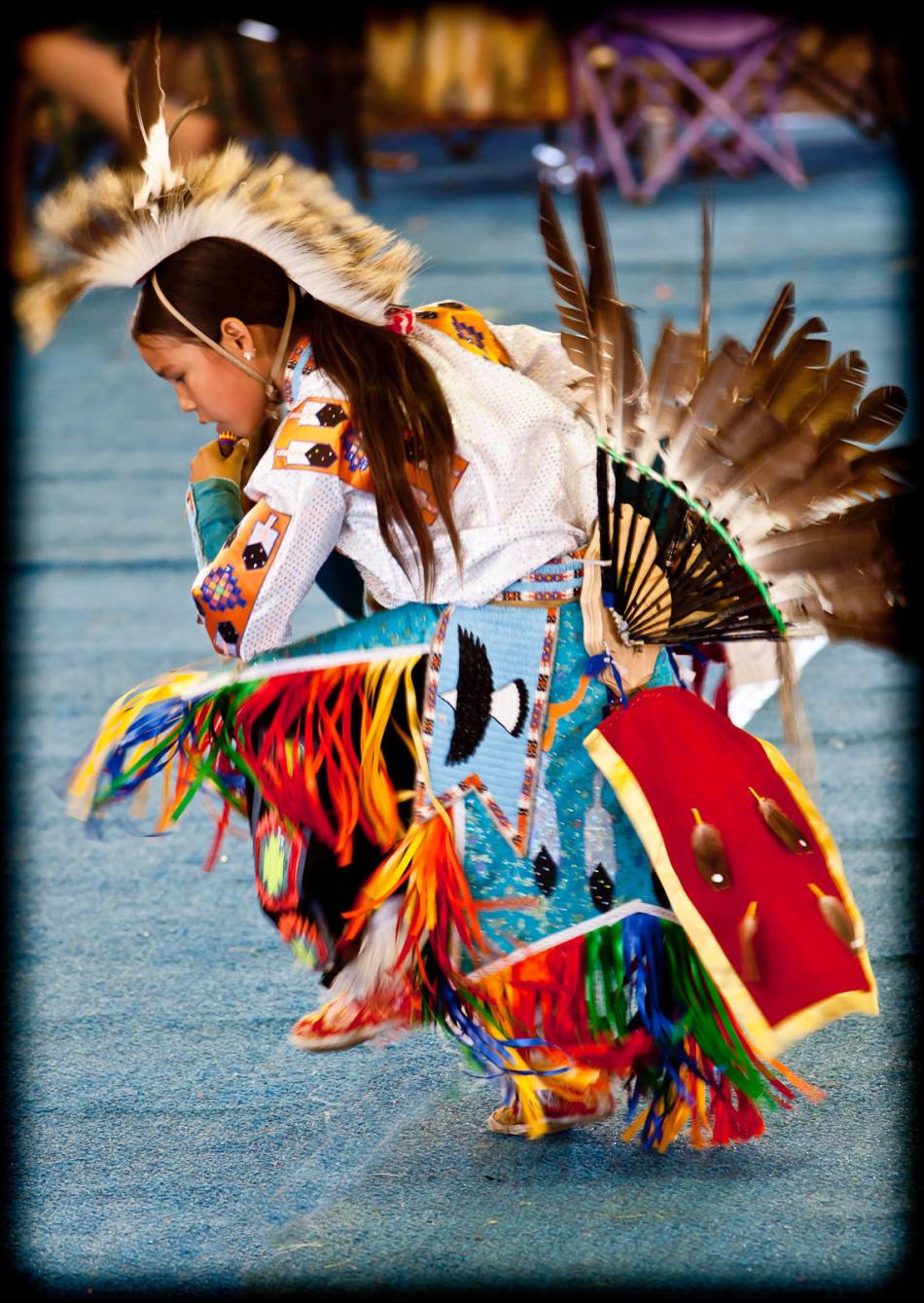