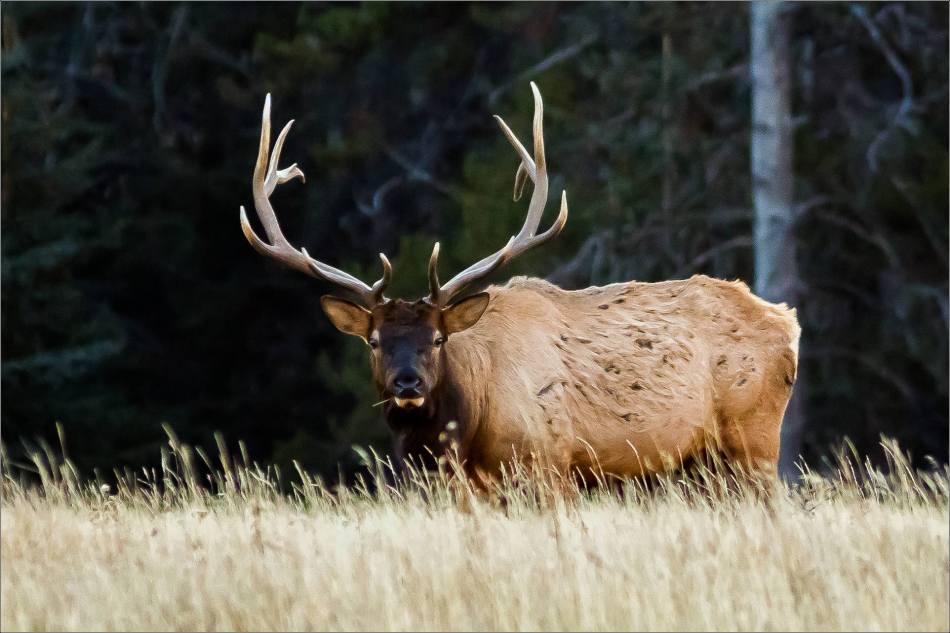 I met this handsome fellow, a bull Elk, in a meadow near Lake Minnewanka.  He was grazing along with a few other males earlier in the month, shortly before the snow began to fly in the park. 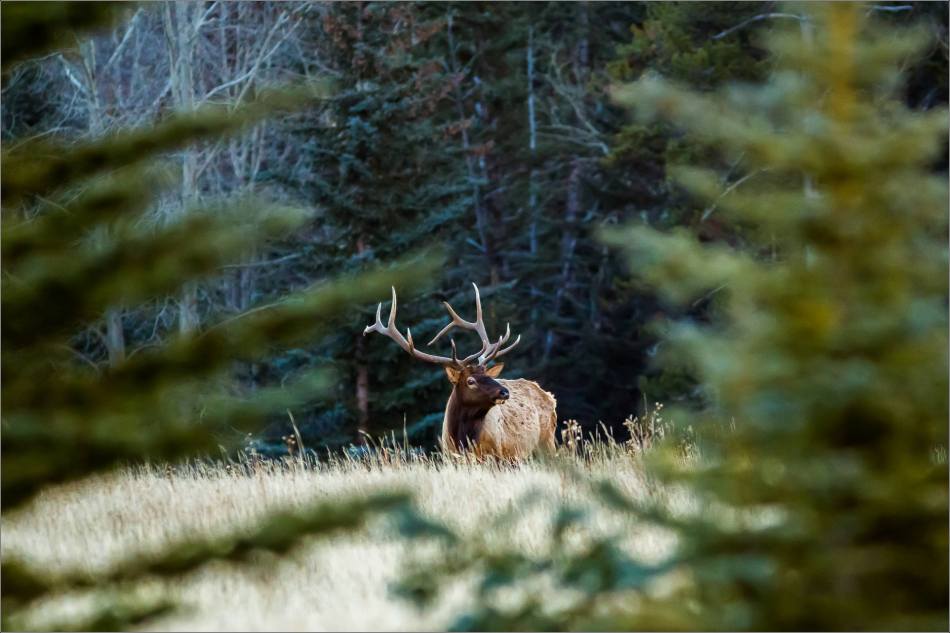 Following a beautiful sunrise down on the Vermilion Lakes, my friend and I drove up towards Lake Minnewanka to see if there was any wildlife that wanted to be seen.

We spied this bull elk along the edge of the canal where the lake drains out grazing on the patches of snow-free grass.

He spent a little time in the water and the climbed out and moved towards us along the tree line.  I loved the way the reflection cast by the elk and the trees onto the water shimmered and blurred. 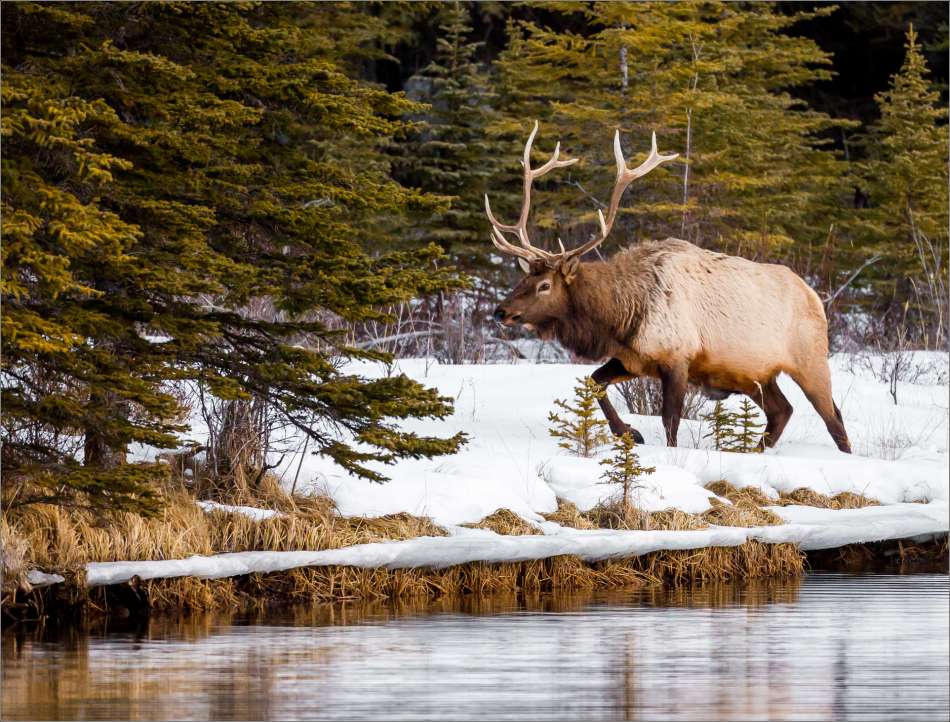 Just after walking behind the stand of trees that hung over the water, the elk walked into the trees to graze.  Returning to the car, we found the elk had moved to the edge of the trees by the road and that allowed us to watch him stripping bark of fallen tree branches.

I drove along the Lake Minnewanka road last weekend with plans to photograph the sunrise from a bluff above Two Jack Lake that affords a great view of the lake along with Mount Rundle in the background.   Parking at a pullout near my intended spot, I started setting up my gear when I noticed a female elk standing near a tree about 20 metres away.  It was still dark out but I could see her staring at me so we played that game for a few minutes.  It was too dark to shoot and she seemed pretty relaxed so I was happy to just watch her.  Then, I saw some movement behind her and a bull elk stood up and shook the snow off.  She might have been happy to stay there but he wanted to get a bit of separation so they hopped the snow bank onto the road and, after clearing the bank on the far side, climbed the hill to the edge of the forest.  At this point, the light was brightening quickly and by raising the ISO on my camera I was able to take the image above of the bull staring at me from the top of the hill.  I thought they were going to continue into the forest but when I reviewed the picture in the LCD on the camera, I noticed the female’s ears in the lower left corner of the picture and realized she was laying down.

They were in no hurry to disappear so I stayed on the far edge of the road from them and photographed the bull with his amazing antlers.  These are among the best balanced racks that I have seen and one of the largest.  Really impressive and when he licked his chops I had a fleeting image of him using them on me.  That idea didn’t take hold as his body language did not suggest any agitation.  He stayed on this little rise for the time while I was there and the cow got up once but stayed low and mostly out of sight.

I tried not to take it personally when he stuck his tongue out.  It’s a funny look that’s hard not to anthropomorphize a bit.

Even while scratching his leg, the elk kept one eye on me presumably to avoid being surprised by any movements I might make.

Switching lenses for a wider composition you can see the first light colouring the peak of Cascade Mountain above the forest.

I left them just before sunrise as he was turning his attention towards the trees.  I piled my gear back in the car and headed down to the Bow Valley Parkway and, as it turned out, to a pair of wolves.

Silhouettes: Elk on a Ridge 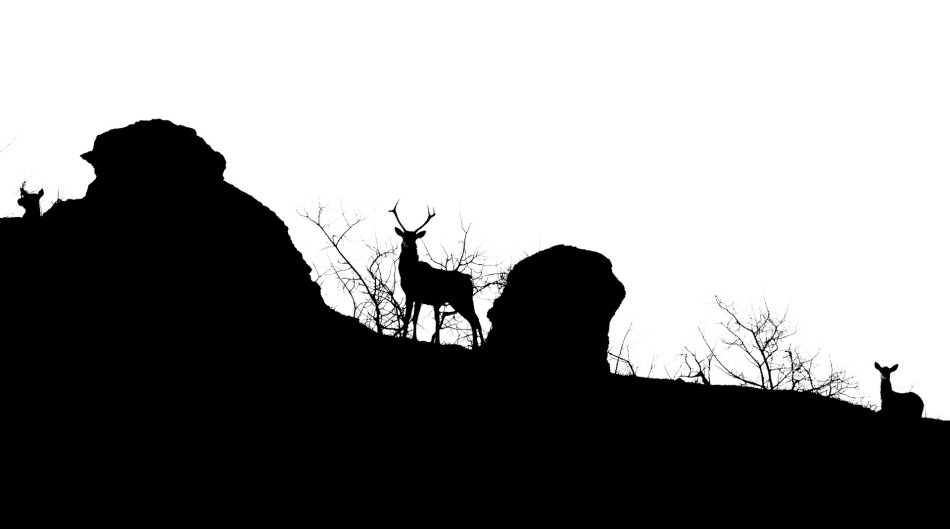 The Sibbald Herd is a large group of elk that forage west into the front range of the Kananaskis mountains and east to Springbank near Calgary.  They move within a relatively thin band along the eastern part of their land and are often in the scrub brush that edges the farmland along Highway 22 between Highway 8 and the Trans Canada Highway.  They often graze behind this ridge in a shallow valley but on this morning I found them lined up among the trees and the rocks.  They were quite interested in my for a couple of minutes and then resumed grazing and wandered back behind the hill.

I photographed these animals about an hour after sunrise with the sun still below the crest of this ridge.  The strong backlighting made for wider range from dark to light than my camera can capture so I chose to work with the structural elements within the scene.  Reduced to black and white, there is an interesting relationship between the land and the elk highlighted in these pictures. 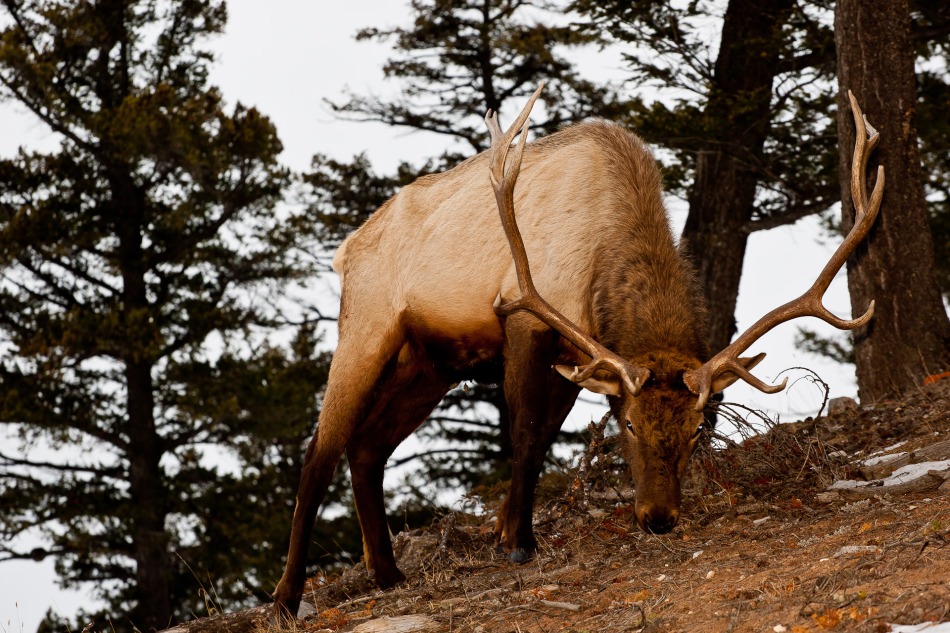 We’re up in Banff for a few days and staying at the Douglas Fir Resort (nice place with an excellent waterslide for the kids) on Tunnel Mountain.  We drove past a few elk (wapiti) cows near the lodge yesterday which served as good foreshadowing for this morning.

I went down to the Vermilion Lakes for a sunrise shoot and when I was out on the lake edge I noticed this bull elk laying down on the hill above me along the wildlife fence that runs along the highway corridor to prevent wildlife collisions.  I carried on with my landscape shooting for almost an hour and when I returned to my car saw the bull had only moved a few meters along the ridge.  I changed to a telephoto lens and climbed up the mountainside a fair distance away from him.  I stayed in sight so he knew where I was and headed up the opposite direction from where his grazing was taking him along the ridge.  I wasn’t sure if the elk would stick around or trot around the rocks.  I was wading through some deep snow so it took a few minutes to get up but he hadn’t wandered away.  I set up my tripod and then photographed the beautiful animal for about half an hour before I headed back down.  He was eating the whole time and was not bothered by me (a true advantage of longer lenses) so his head was down low most of the time.   He did raise his head up a few times, once in response to a train whistle, and I took a couple of those images.  Really a great encounter – too bad a little sunlight couldn’t break through the morning cloudbank to bring some warm illumination to that coat – but no complaints.

Elk are members of the deer family which, in North America, includes moose, whitetails and mule deer.  In sheer size, they aren’t the largest but as you can see with this buck their antlers can be incredible.  This fellow is young and skinny.  I think the winter has been hard on many animals this year with the cold and the deep snow burning a lot of calories that are hard to come by.  A very good reason to look forward to spring.