Following a beautiful sunrise down on the Vermilion Lakes, my friend and I drove up towards Lake Minnewanka to see if there was any wildlife that wanted to be seen. 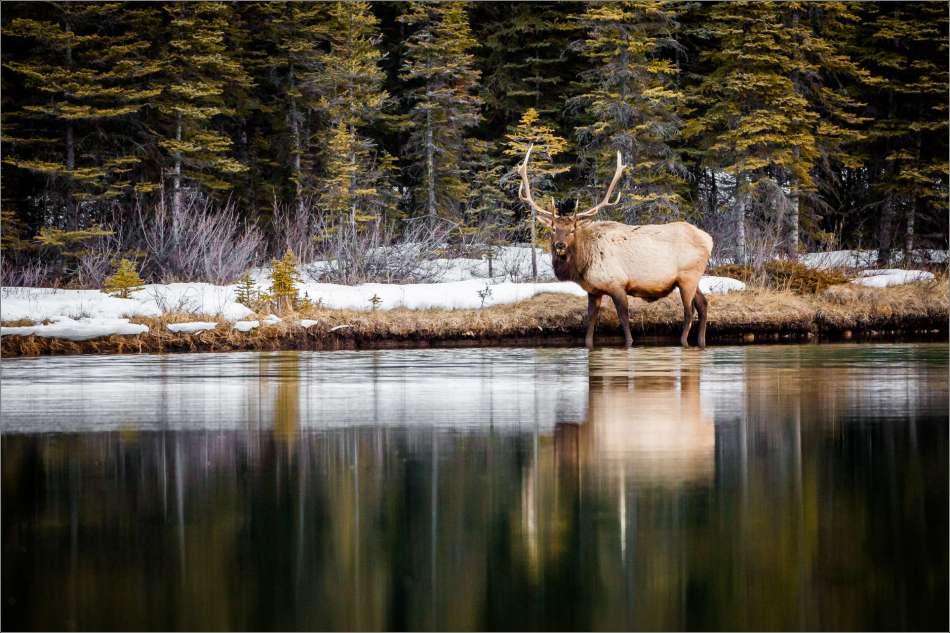 We spied this bull elk along the edge of the canal where the lake drains out grazing on the patches of snow-free grass.

He spent a little time in the water and the climbed out and moved towards us along the tree line.  I loved the way the reflection cast by the elk and the trees onto the water shimmered and blurred.

Just after walking behind the stand of trees that hung over the water, the elk walked into the trees to graze.  Returning to the car, we found the elk had moved to the edge of the trees by the road and that allowed us to watch him stripping bark of fallen tree branches.

We’re up in Banff for a few days and staying at the Douglas Fir Resort (nice place with an excellent waterslide for the kids) on Tunnel Mountain.  We drove past a few elk (wapiti) cows near the lodge yesterday which served as good foreshadowing for this morning.

I went down to the Vermilion Lakes for a sunrise shoot and when I was out on the lake edge I noticed this bull elk laying down on the hill above me along the wildlife fence that runs along the highway corridor to prevent wildlife collisions.  I carried on with my landscape shooting for almost an hour and when I returned to my car saw the bull had only moved a few meters along the ridge.  I changed to a telephoto lens and climbed up the mountainside a fair distance away from him.  I stayed in sight so he knew where I was and headed up the opposite direction from where his grazing was taking him along the ridge.  I wasn’t sure if the elk would stick around or trot around the rocks.  I was wading through some deep snow so it took a few minutes to get up but he hadn’t wandered away.  I set up my tripod and then photographed the beautiful animal for about half an hour before I headed back down.  He was eating the whole time and was not bothered by me (a true advantage of longer lenses) so his head was down low most of the time.   He did raise his head up a few times, once in response to a train whistle, and I took a couple of those images.  Really a great encounter – too bad a little sunlight couldn’t break through the morning cloudbank to bring some warm illumination to that coat – but no complaints.

Elk are members of the deer family which, in North America, includes moose, whitetails and mule deer.  In sheer size, they aren’t the largest but as you can see with this buck their antlers can be incredible.  This fellow is young and skinny.  I think the winter has been hard on many animals this year with the cold and the deep snow burning a lot of calories that are hard to come by.  A very good reason to look forward to spring.