After dark in Boundary Bay

After watching a Barn owl hunt across the long grass marsh flats at Boundary Bay through dusk in mid-March, I was packing up when I saw a Snowy owl perched on a log.  It was about 100 yards away but the white oval shape stood out distinctively against the blues and blacks of evening.

I worked my way along the levee towards the bird and it just stared at me as I stopped about 50 feet away.  We stared at one another for a minute and then the owl whipped its head around and cocked it towards some sound or motion I was oblivious to.  It didn’t attack and went back to looking around for a while.  A few minutes later, it launched onto another large piece of driftwood which was closer to the ground.

From there, the snowy stalked along the wood and ended up jumping into the grass at one point.  It stayed in the grass for a little bit but I didn’t see whether it was successful in catching something or not.

The bay was dark by this time and I left the owl as it flew to another perch nearby.  I had a few great encounters in Boundary Bay – I’m already excited to go back soon.

Hunting with a Barn owl at dusk

Boundary Bay is lovely throughout the year.  Early spring along the levee that runs parallel to the tidal flats, driftwood piles and grassy fields is not an exception.  When we were there last weekend, the rain rolled in as we were watching Snowy owls scattered across the grassland which did contribute to a beautiful scene a couple of hours later.  At the time, it set the owls in their poses as they hunkered down through the showers. 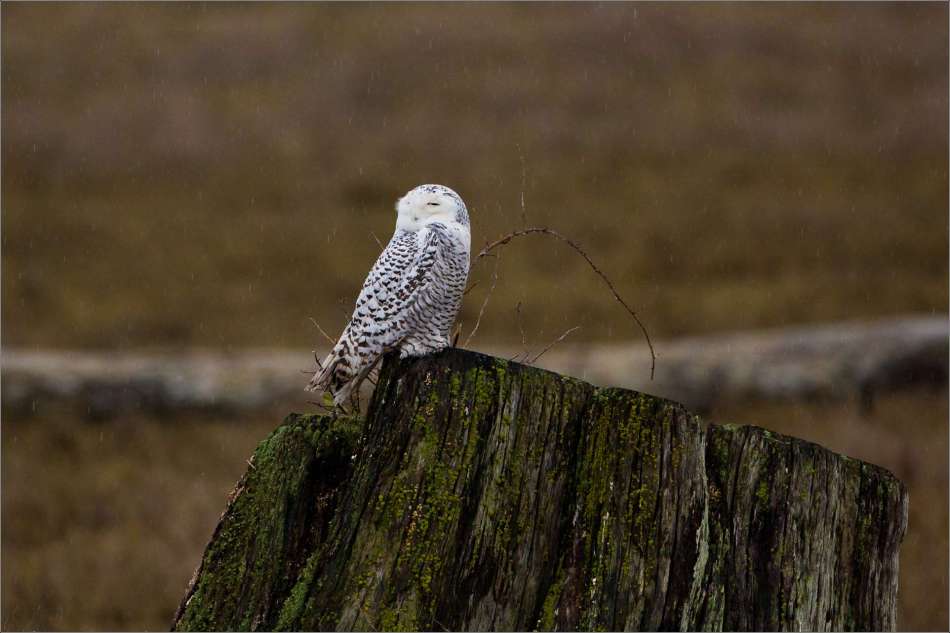 Jack and I waited for the weather to change so that the owls may take to the air.  Dusk was quickly approaching and we had hopes that these raptors would start hunting.  The rain increased and we walked back along the dyke towards the parking lot a couple of kilometers away.  As the car came into view, the rain lessened and when I was at the trailhead, the sun had even hazarded a couple looks under the clouds.  The evening light was beautiful though very soft as it was filtered by the clouds and water vapour in the sky.  A rainbow over the water drew my attention out over the flats and that’s where I first saw a distant bird flying low over the marshes.

I followed it through the gloom and as it moved closer and into the sunlight, I was able to identify it as a Barn owl (Tyto alba).  This was my first sight of one of these owls in the wild and I fell in love immediately.

They have a chaotic flight pattern where they swoop along and then dive with great conviction downwards at crazy angles when they find a target.  It crisscrossed a large area for about half an hour and all I could have wished for was a bit more light. 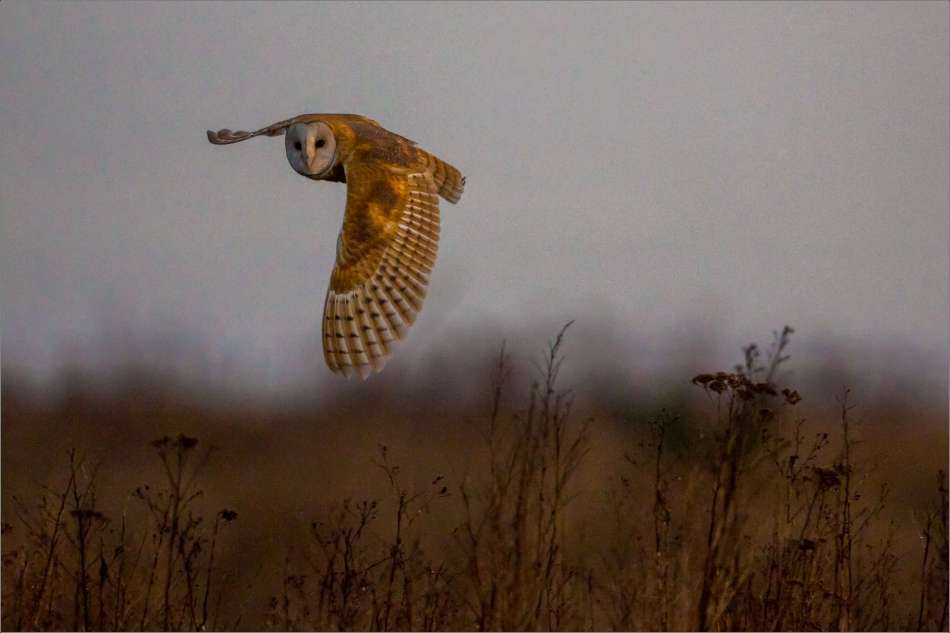 Dusk was well entrenched by this time and I was pushing the camera’s ISO and autofocus hard.  The owl was curious too and swooped by on two separate occasions.  The whole time spent watching this bird was a great experience and I’m looking forward to my next encounter with one of these beautiful owls. 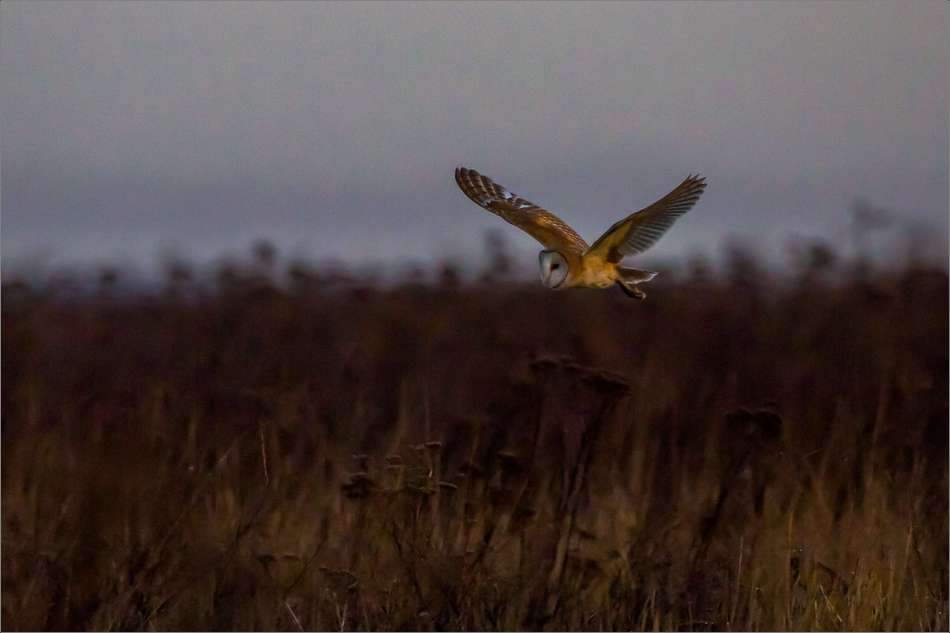 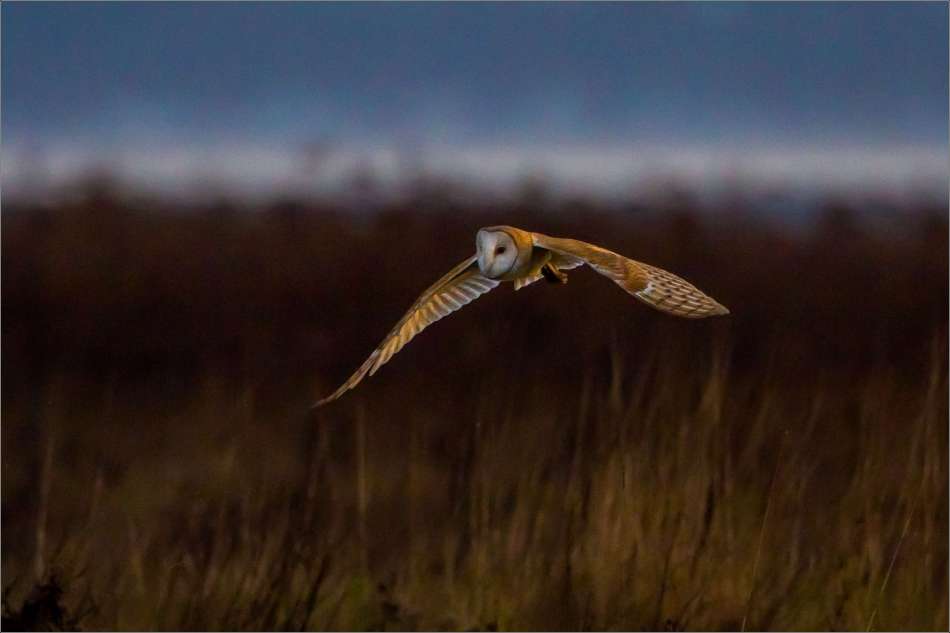 I could still make out the silhouette as it flew further away but my attention was pulled in a new direction by a Short-eared owl that circled by for a couple of minutes and then a Snowy which, freed from its perch by the calm weather, landed on a pile of waterlogged wood less than a stone’s throw away.  I hope to share some of those photographs soon.