Stags in the hazy morning sunshine 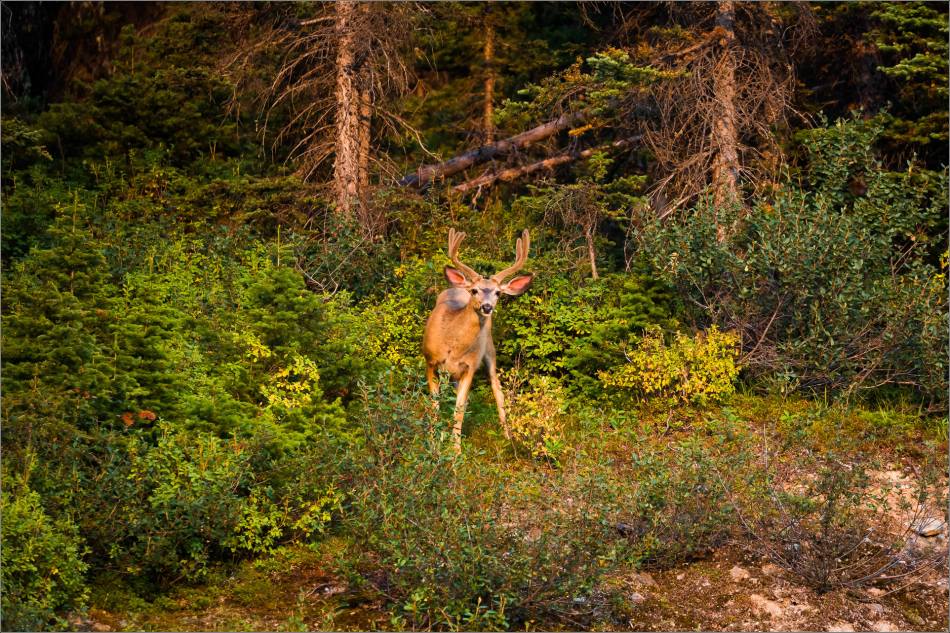 There were two mule deer bucks nibbling on roadside grass that I came across last weekend.  They were between the two Kananaskis Lakes and they ran up the hillside to the forest edge when another car passed by.  This brought them into the morning sunshine which illuminated them wonderfully. 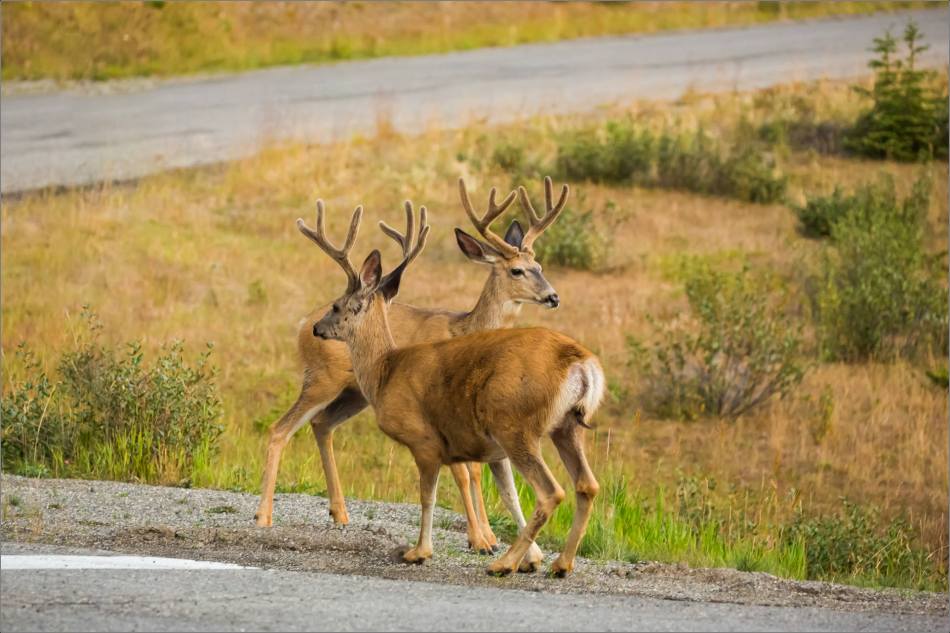 One of the stags paused at the top of the hill before disappearing behind the trees.  The other walked along the ridge above the road for a few minutes. 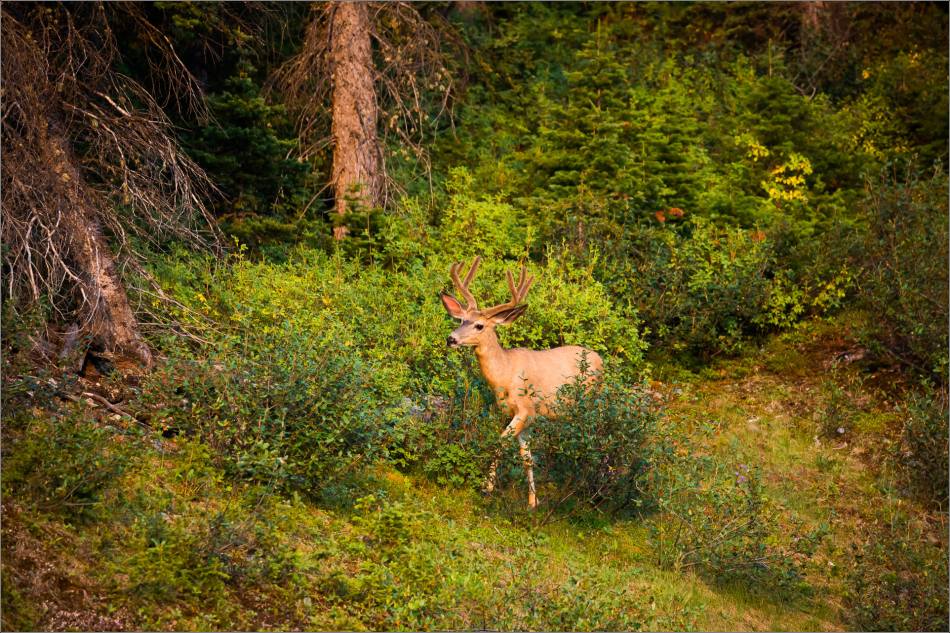 He was enjoying the buffalo berries which are ripe throughout the valleys in Kananaskis now.  I always think of these berries as being food for the bears but this fellow reminded me that they are a delicious snack for many of the animals in the Rockies. 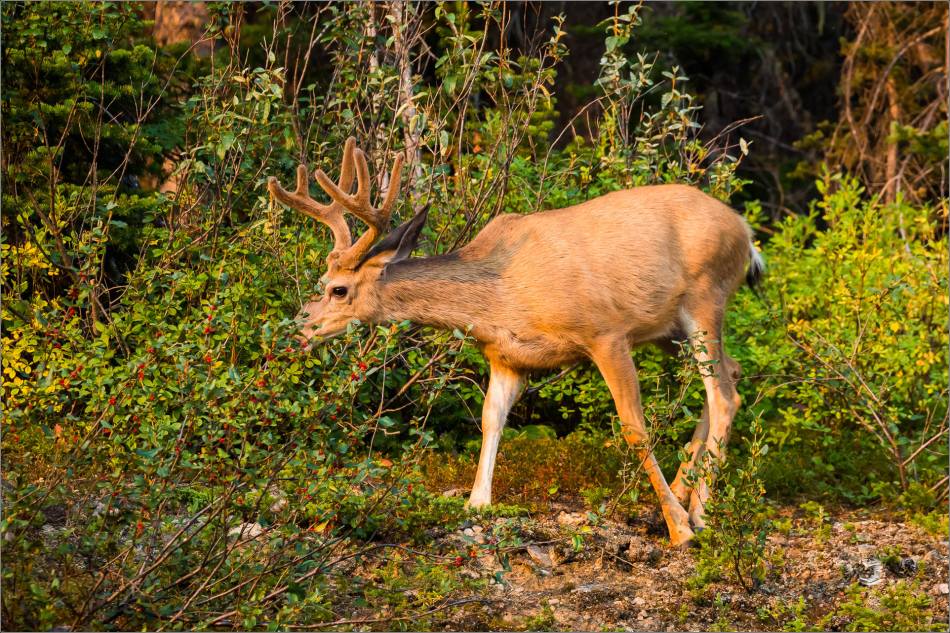 The smoke from the wildfires in British Columbia and Alberta continues to roll across the west.  That morning the resulting haze was quite heavy which warmed and softened the sunlight.  Beautiful light to work with – a very small and personal silver lining to a massive issue impacting millions of people.  This photo of peaks in the Kananaskis valley gives some indication of the atmosphere on that morning. 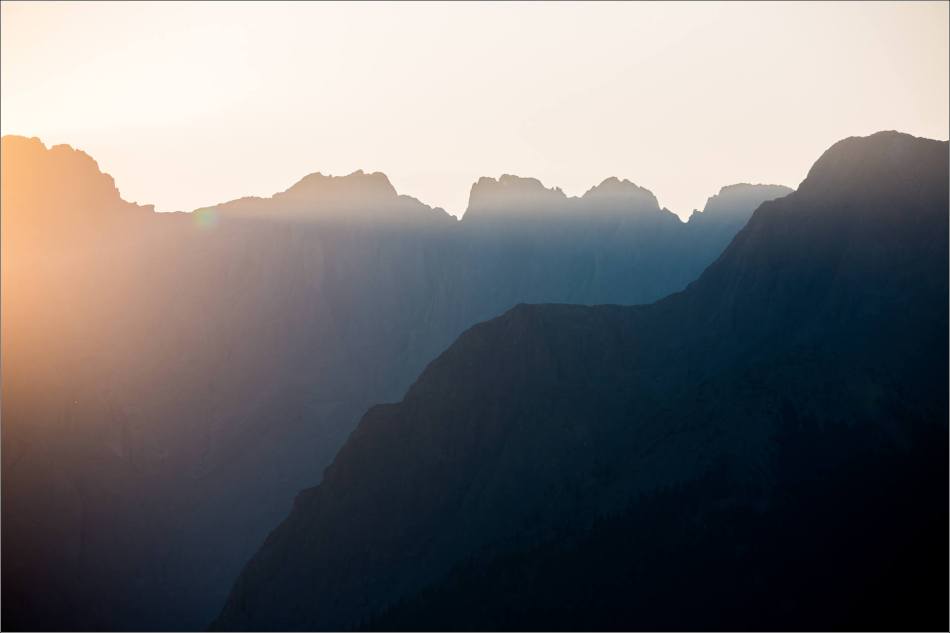 The stag kept an eye on me but with little traffic and me staying in my car had little provocation to join his partner in the woods.  I left him still grazing and continued my travels around K-Country. 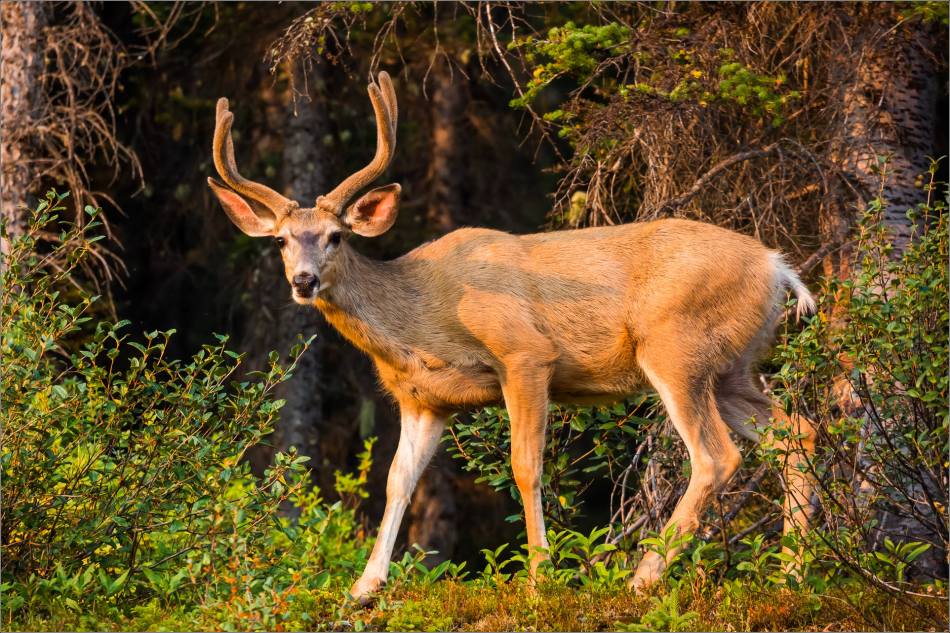 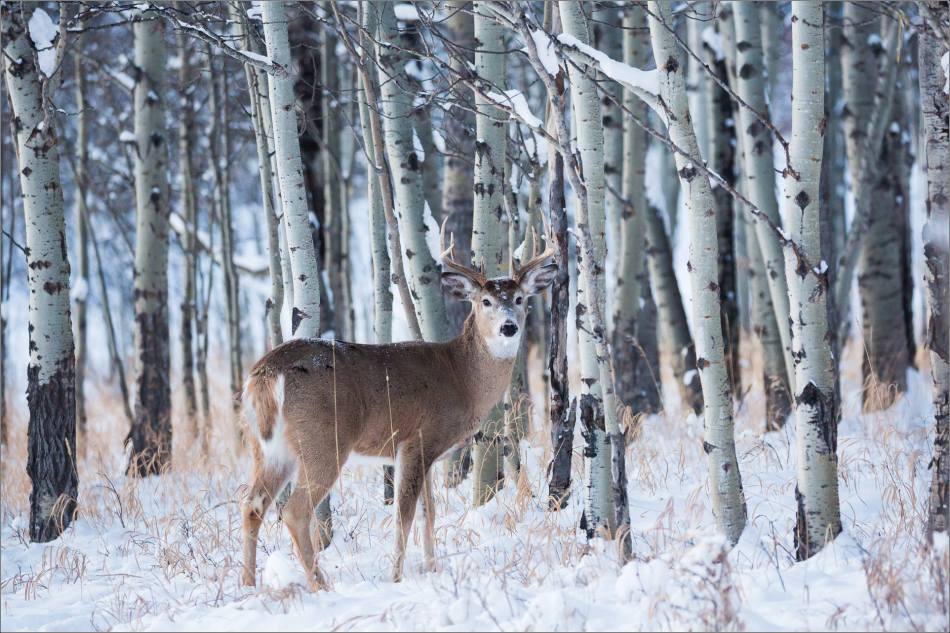 This White-tailed stag was found during a short drive into Bragg Creek on Christmas day this year.

We are slowly warming up to New Year’s Eve and looking forward to the fireworks that our local community of Redwood Meadows puts on.  Always a great show – and they go early so the children get to enjoy them too!

I hope everyone has enjoyed, or is enjoying the last day of 2016.  It has been a winding year for our family, as it often goes, but still filled with a lot of laughs and the continued wonders of rearing my two children.

Fighting in the fields 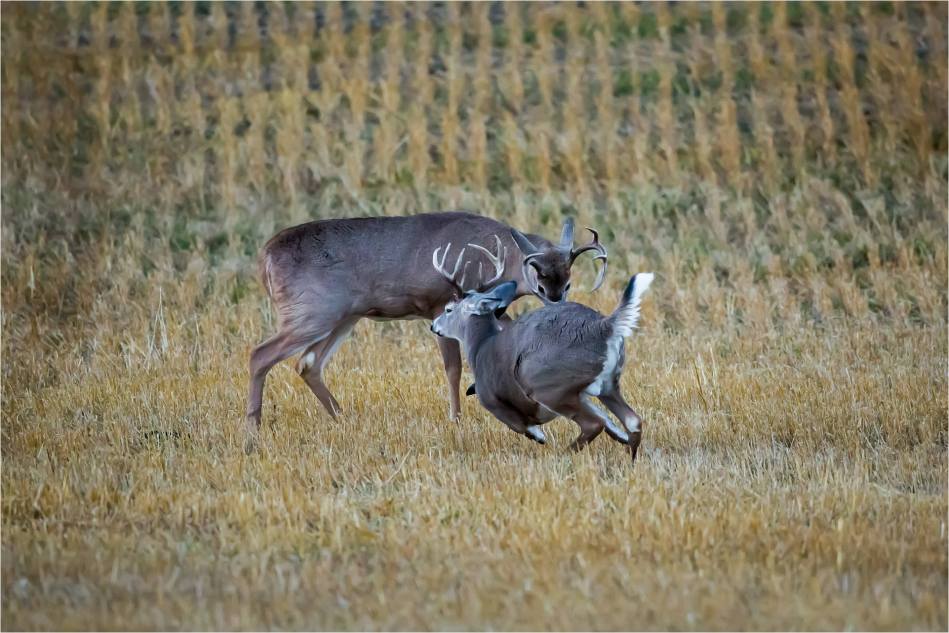 I was roaming the gravel roads east of south of Cochrane on the weekend.  As dusk started to fall, I found a small herd of white-tailed deer in the middle of a field.  There were two bucks standing apart from four does.  The smaller male was prancing about a bit so I put on my longest lens and waited to see if anything would happen.  We are still in the middle of the rut so I was hoping they might do some antler jousting. 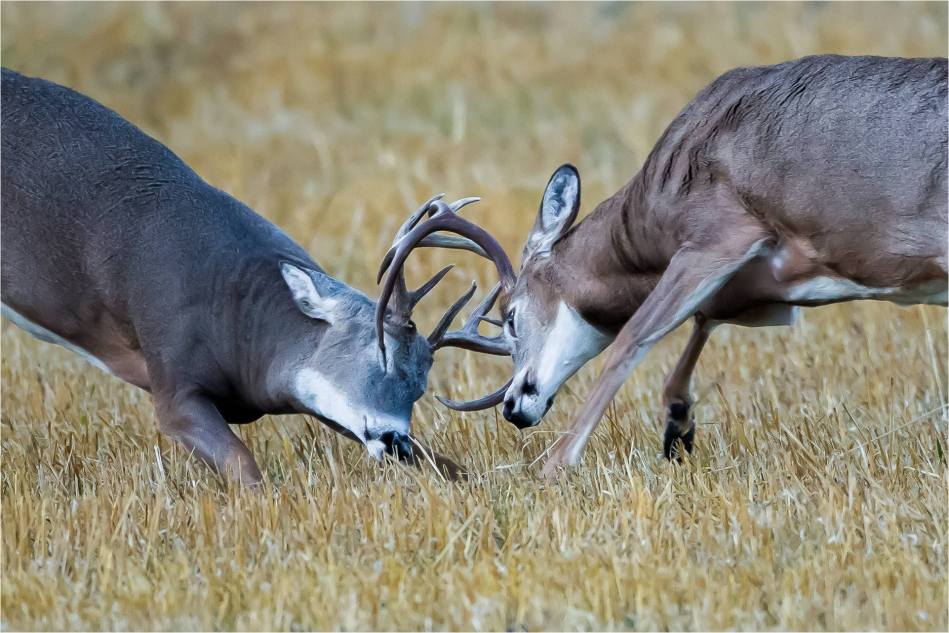 And, as it turned out, they did.  They clashed a couple of times with antlers cracking while they tangled head to head.  The battle was short, frenetic and I felt very lucky to watch this moment play out. 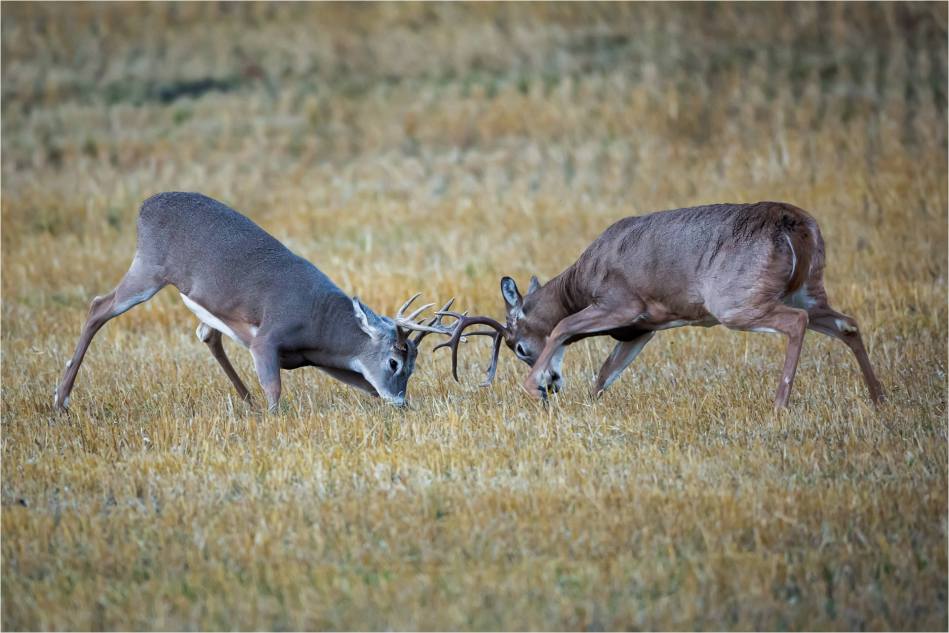 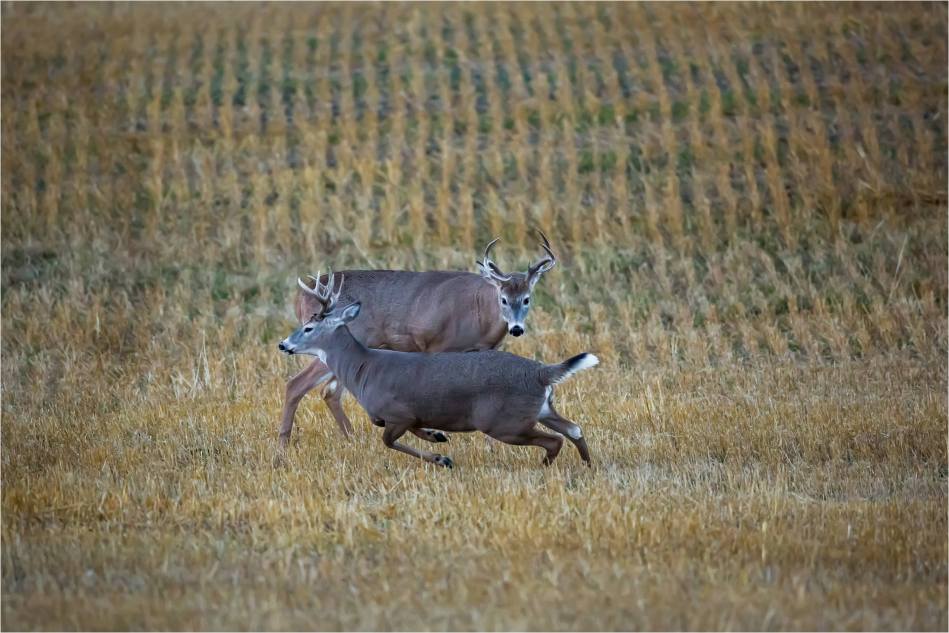 After this skirmish the smaller one darted away and they stood apart for a minute before moving up a fold in the hillside back towards the seemingly unimpressed does. 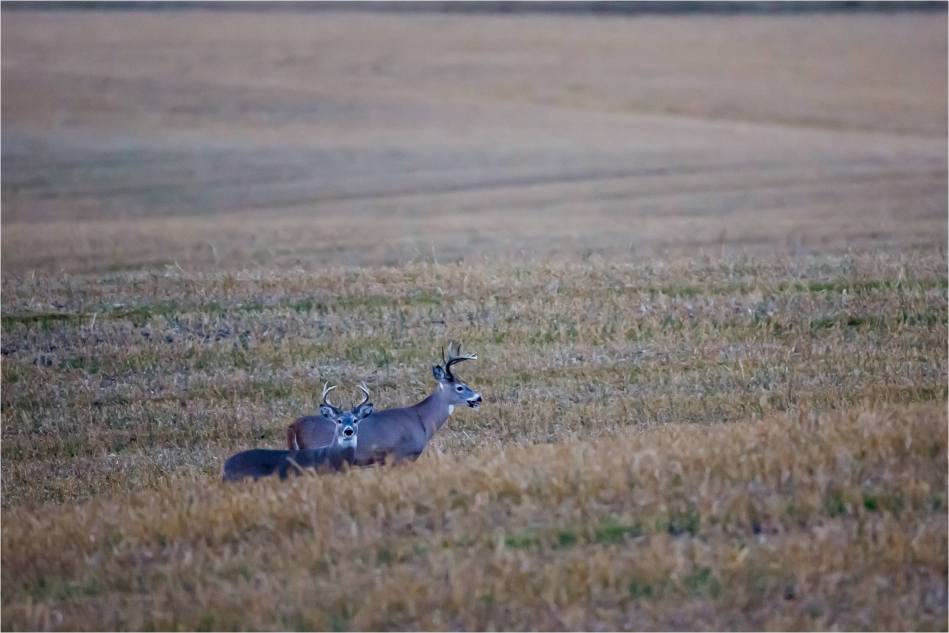 A creature of the mist 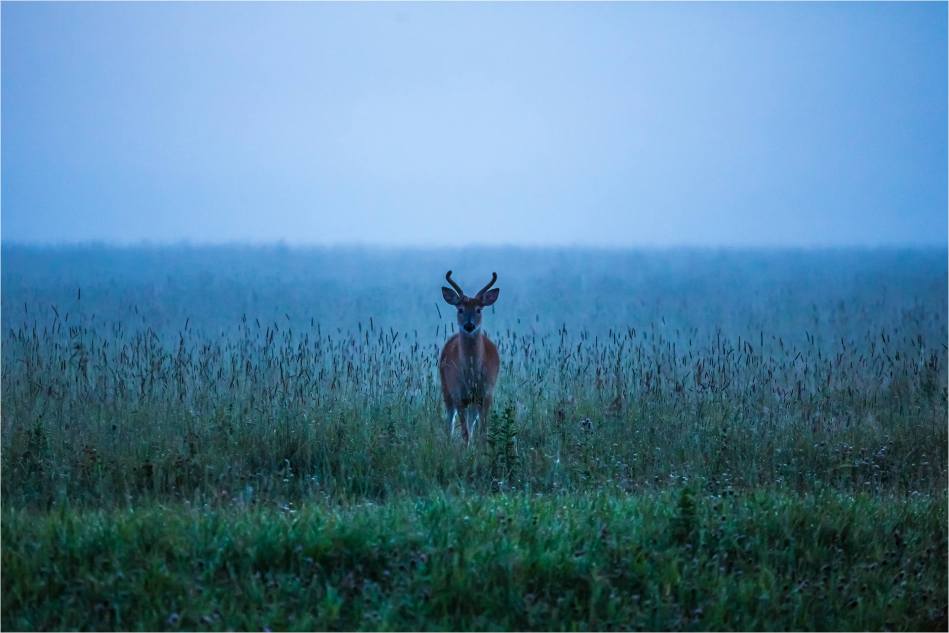 With the cooler mornings of late August, mist becomes a frequent visitor before dawn in Bragg Creek.  This young White-tail stag stared at me from a field near the hamlet which gave me a moment to photograph him surrounded by, and almost a part of, the mist on the weekend on a day that started very close to freezing. 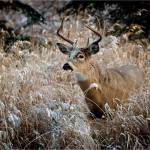 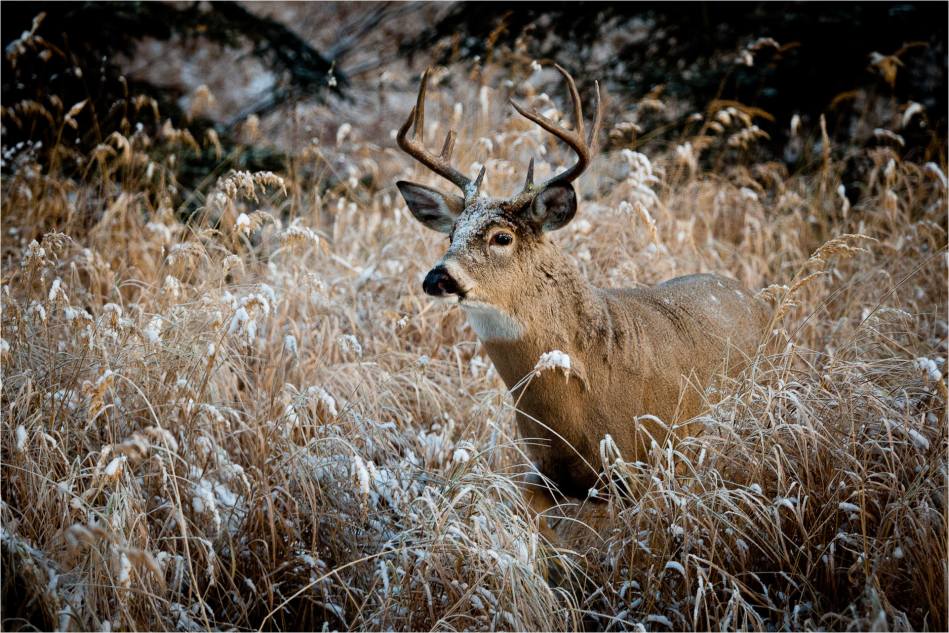 A chilly morning in West Bragg Creek gilded all the tall grass and tree boughs with hoar frost emphasizing the hold winter now has on Kananaskis Country.  I wandered around a few trails before finding this muscular stag walking steadily through a field. 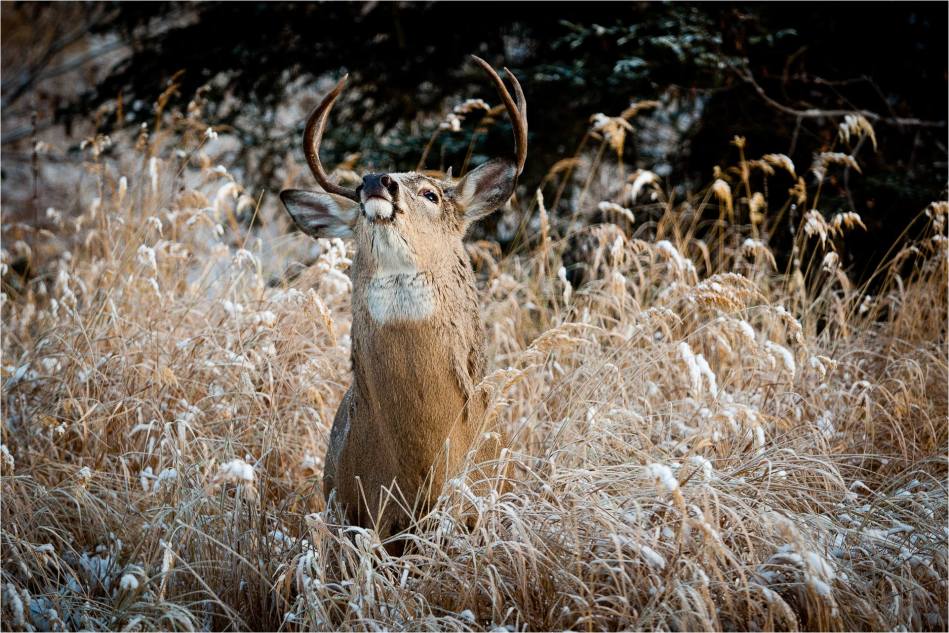 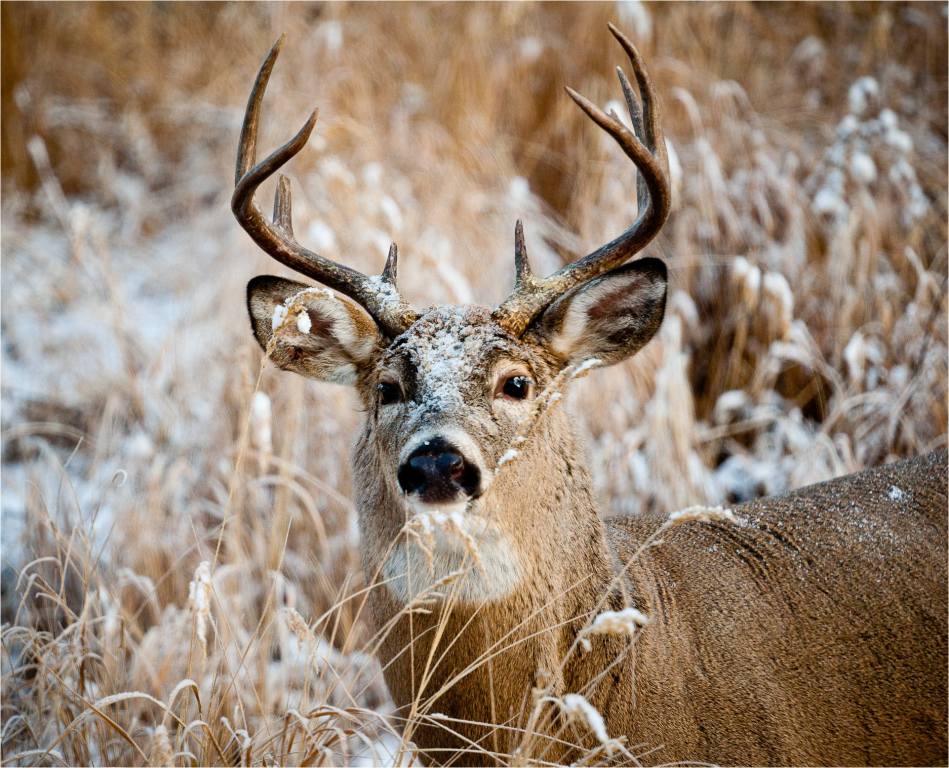 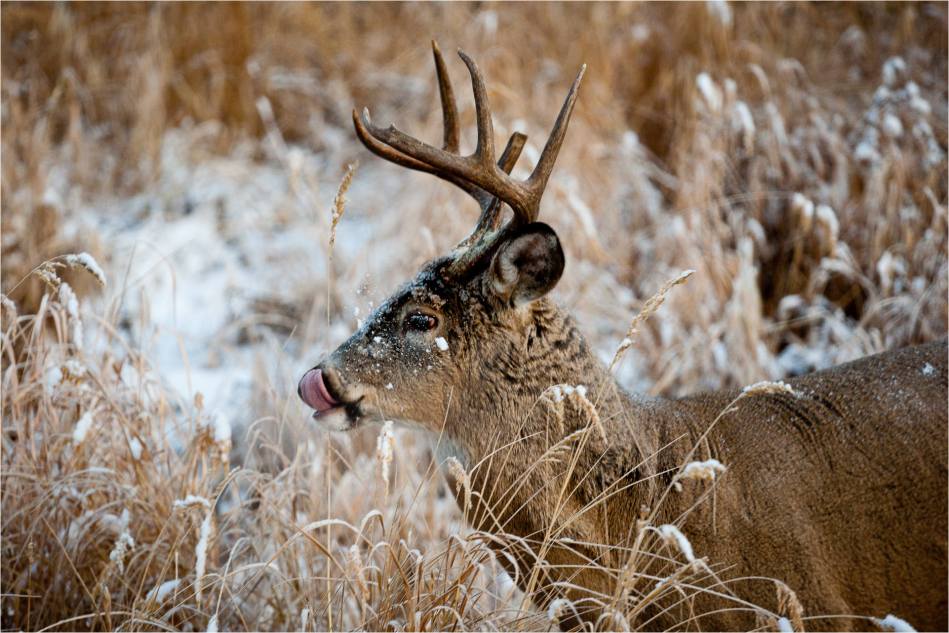 He watched me closely for  a minute, pausing to check me over, before carrying on through the snow parallel to the path before crossing and bounding up the hill into the forest. 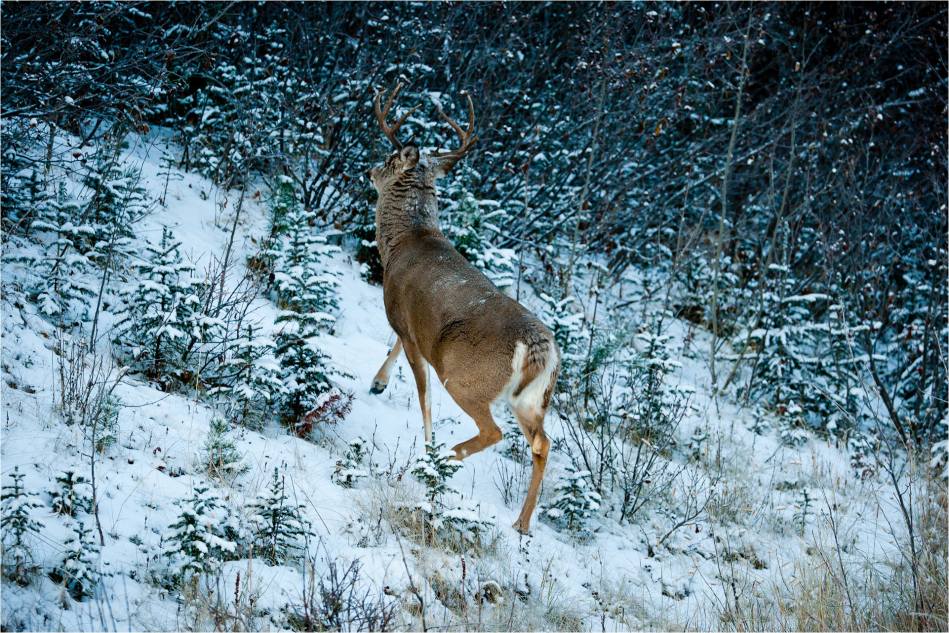 I encountered a second buck as I was heading back to Bragg Creek.  I was driving on Township Road 232 and he was near the fenceline, partially obscured by a stand of reed-like branches.  I was running a bit late and he seemed anxious so I only stayed for a minute to get this image before heading on my way. 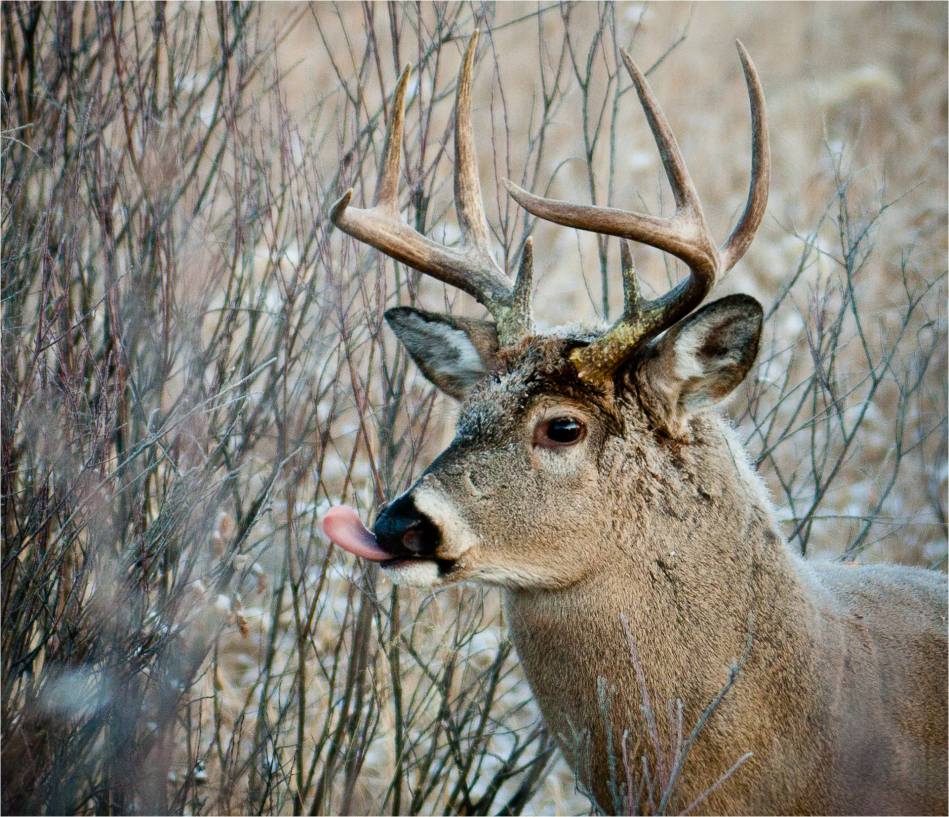