The last night at the 2015 Calgary Stampede

July 12th was the final day of the 2015 Calgary Stampede and I had an invitation from good friends to join them for the Chuckwagon Finals and the Grandstand Show Finale that evening.  I jumped at the chance and enjoyed a great night down on the grounds. 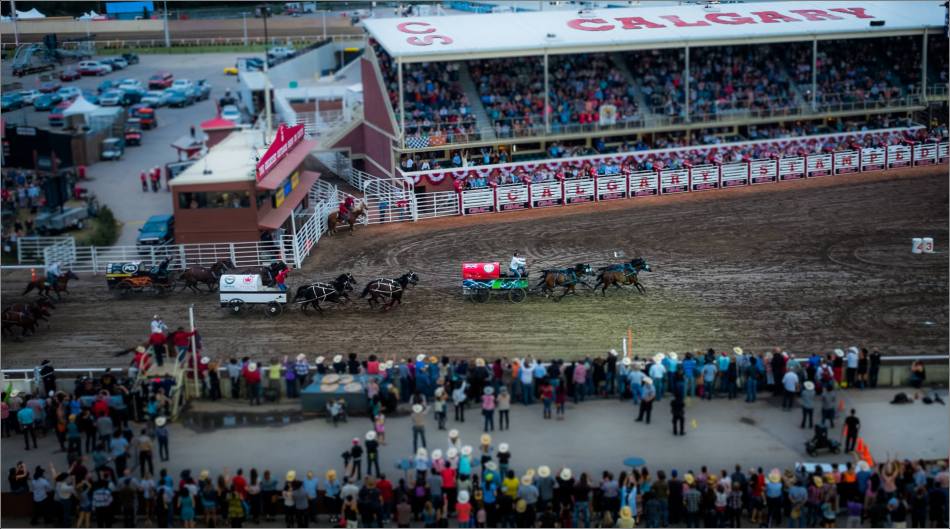 The Chucks were exciting as usual with the best races coming in the last couple of heats.  This year’s champion was Kurt Bensmiller who successfully defended his title from last year in a great race, particularly down the stretch.  Bensmiller was riding on the Tsuu T’ina wagon, whose land we live on, so I was happy for them as well!  Above is my shot of him closing in on the finish line.

Another great race was heat 5 where Mark Sutherland pulled away from a tight grouping with all four teams and won by just under a second.

Earlier in the evening, we walked down the midway, checking out the rides, the people and the crazy games.  I like riding these big swings with my kids and with the sun behind it made for a cool picture. 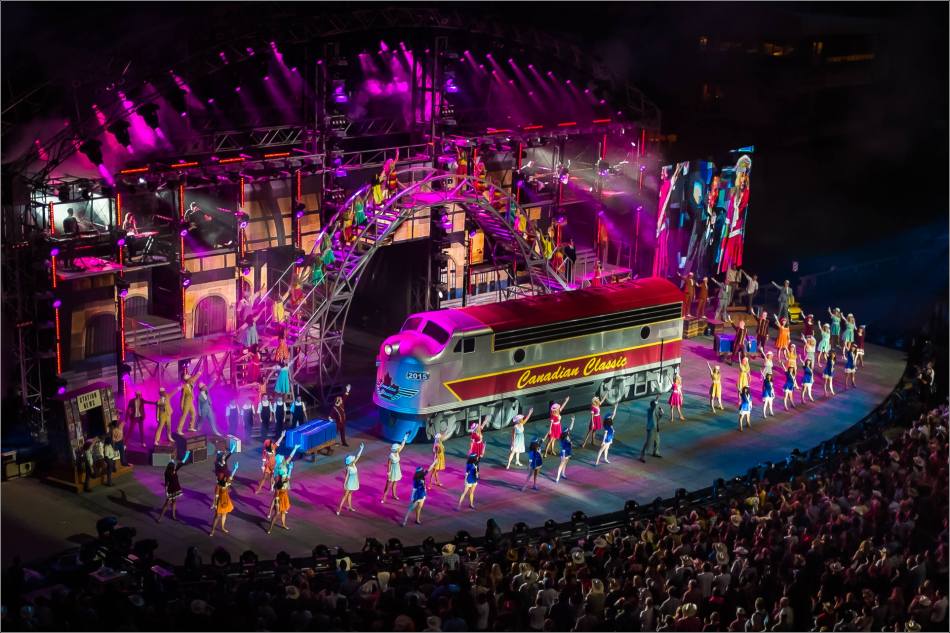 After the races, the Grandstand Show was up and this year’s edition was called the Canadian Classic.  I thought it was great fun.  I was sitting above a group visiting from Ohio and, judging by their enthusiasm during and after the performance, it was well received by friends from afar as well. 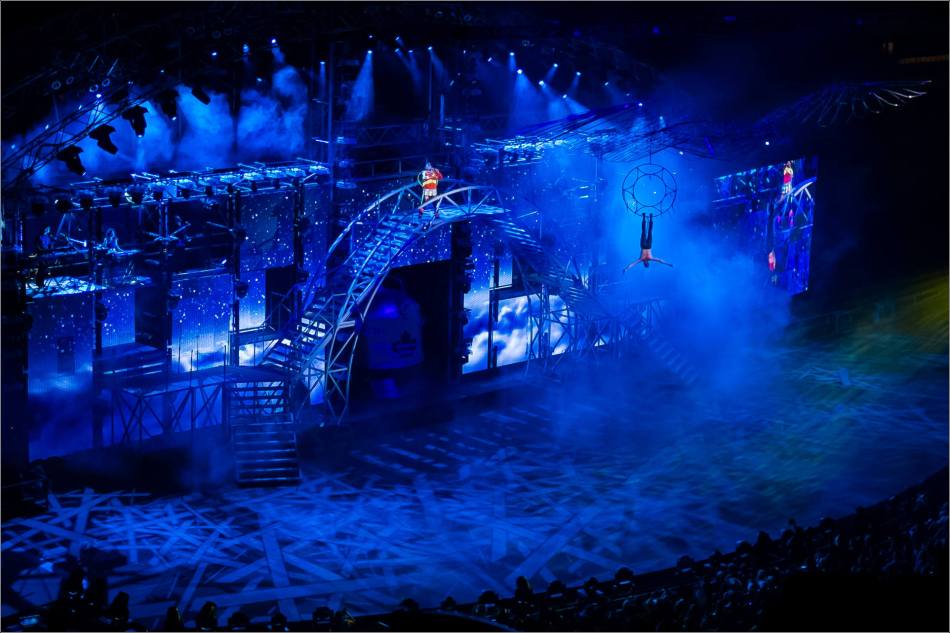 The fireworks are a signature piece that ends each show.  The set on the last day were far and away the largest of the Stampede I was told by a friend who had seen several of them this year.  They were huge, loud and beautiful.  From our seats on the second deck, we weren’t too far below the average explosion height so they felt all-encompassing which is great when it comes to fireworks in my mind.

Lindsay Sears is a local barrel racer from Nanton, Alberta.  She won the Barrel Racing event at the 2008 Calgary Stampede as well as being a two-time Barrel Racing World Champion (2008 and 2011).  The crowd went crazy when she raced today and it was well deserved.  She is the best in the sport right now and is rightfully the hometown favourite. 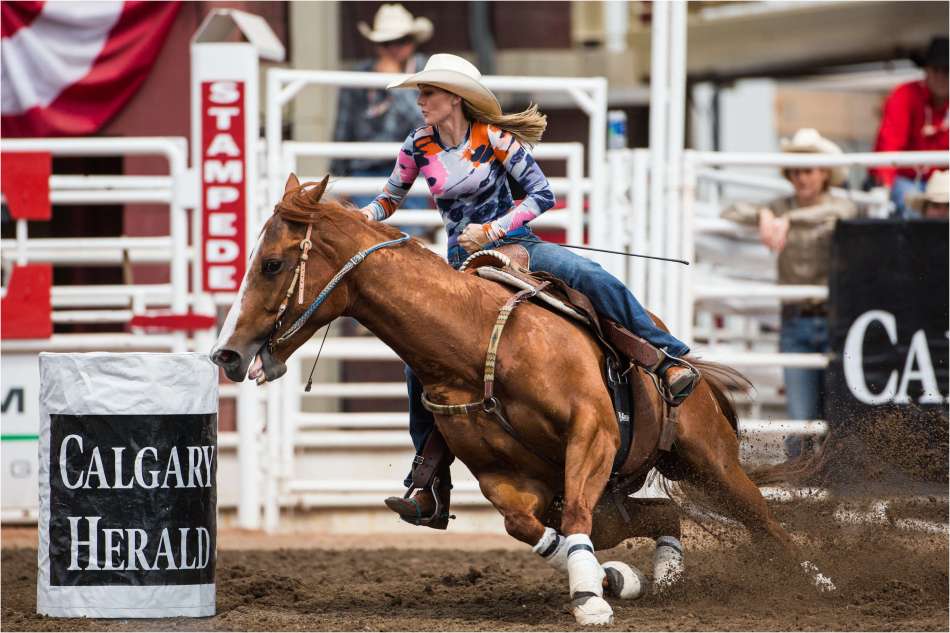 She has been getting faster with each day through the qualifiers at the 100th Calgary Stampede Rodeo this year.  She won the Thursday Group B qualifier, with a time of 17.62 seconds.  She is currently tied for 4th place in Group B with the last qualifier on Friday.  I would expect she will keep getting faster and should earn her spot in the Sunday finals without rolling the dice in the Wildcard Saturday event.  When the finals are run on the 15th, her track record would suggest it might be foolish to bet against her walking away the centennial champion.  I can’t wait for that race – good luck Lindsay! 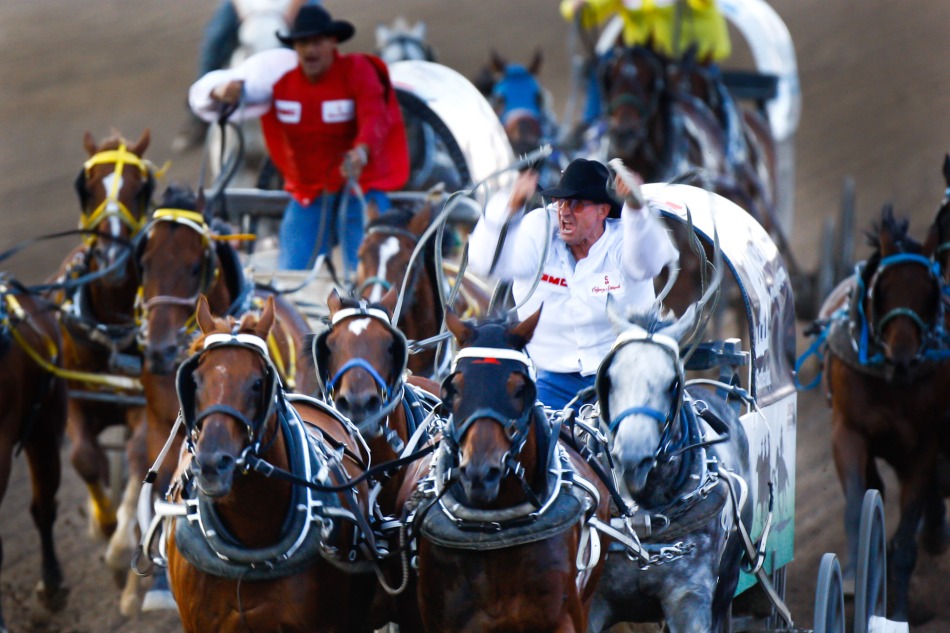 Sunday was the last day of the Calgary Stampede.  The final event at the grandstand was the Rangeland Derby where the chuckwagon teams who had successfully vied for a place in the last heat ran for the $100,000 first place prize.  The final four drivers were Kelly Sutherland, Reg Johnstone, Jerry Bremner and Kurt Bensmiller based on their record over the previous nine days of racing.

Kelly Sutherland is the king in the world of chucks.  Last year he surpassed legendary driver Dick Cosgrave for most wins at the Calgary Stampede with 11.  This year, he came out of the barrel turns clean and held on to the lead tightly all the way down the stretch.

Lined up for the race here is the calm but crowded start to the final.

(I’m still not sure if this slow shutter, zoomed focal length image works or not but thought I’d include it anyways).

Coming out of the barrel turns, Sutherland was tight on the rail and even with Reg Johnstone.  He pulled away through over the open track and beat the Bashaw Flash (Johnstone) by just over a second. 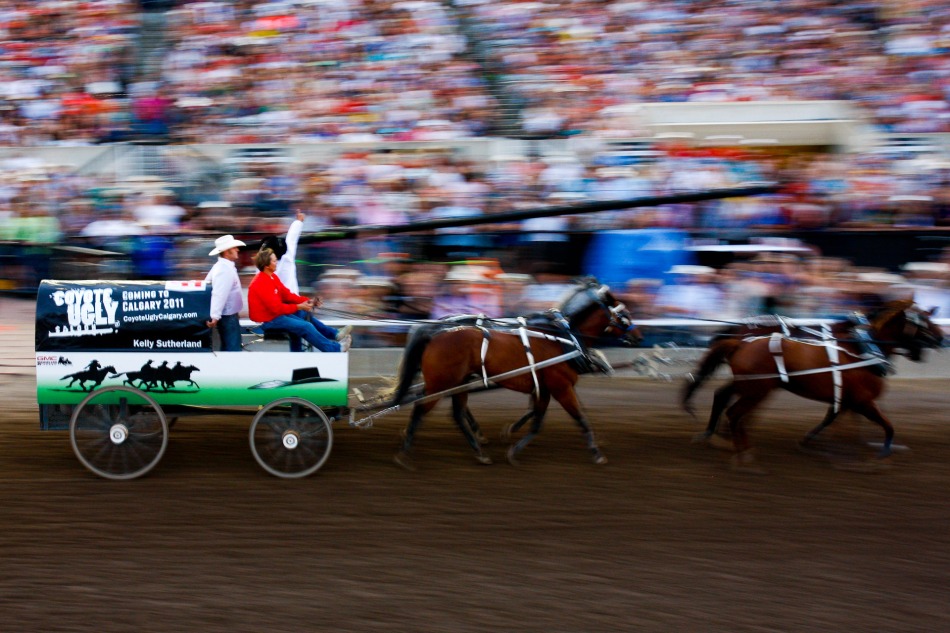 Kelly Sutherland’s thumbs up is a trademark move and with the success he’s earned, the Stampede crowd has seen it many times.  Here Kelly celebrates the win with the grandstand crowd. 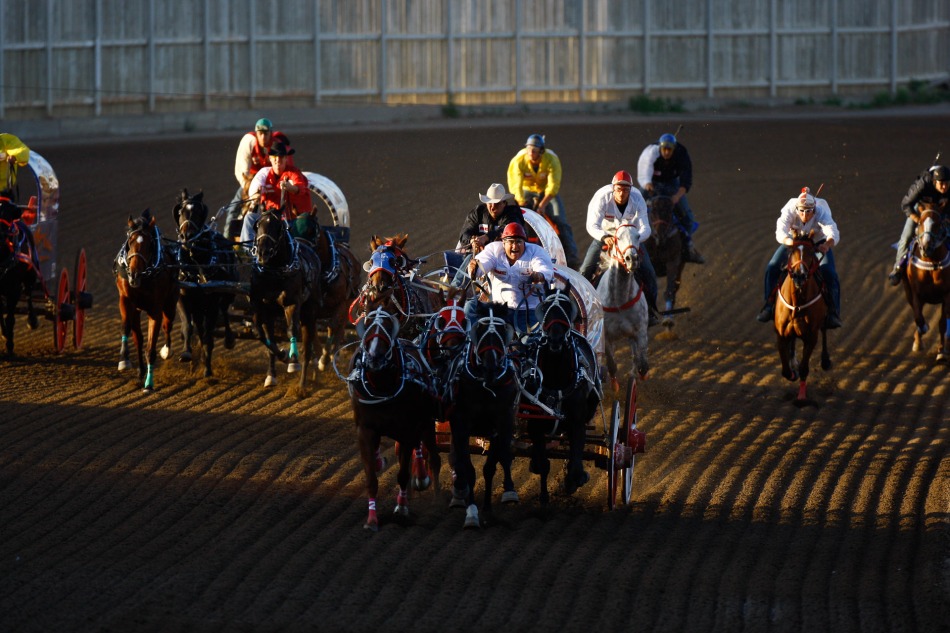 And here are some more images from the Sunday evening heats that preceded the final.

Jason Glass guides his team around the barrel on his way to winning Heat 1. 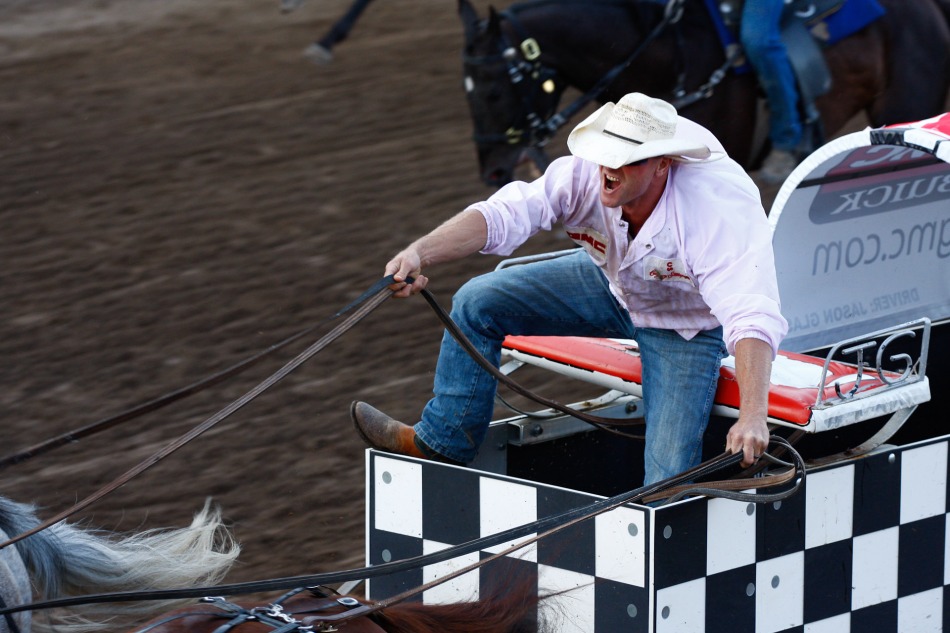 Another of Jason Glass showing the intensity that has carried him to a very successful career – including 3 world champion chuckwagon titles . 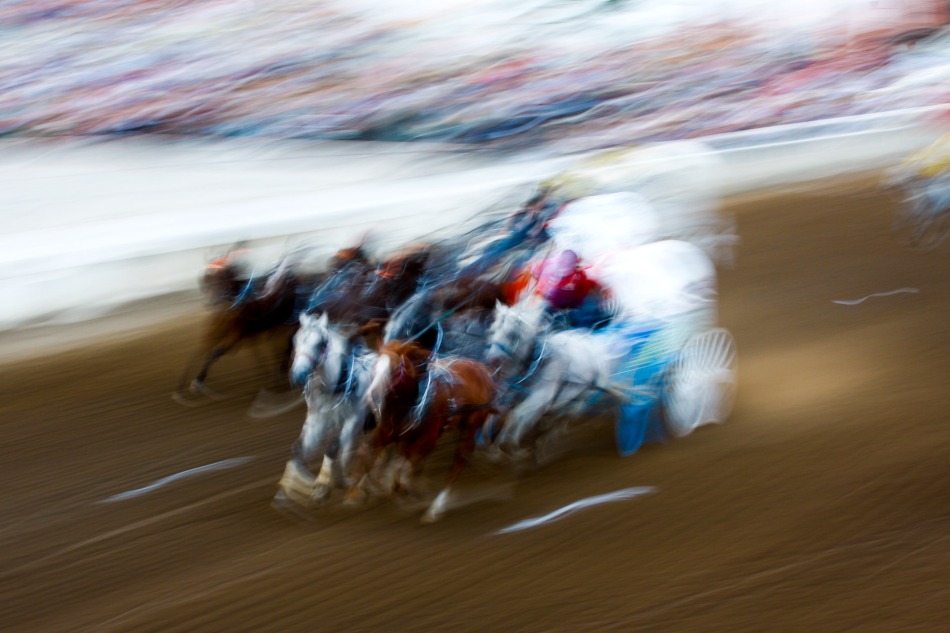 The horses of Ray Mitsuing and Hugh Sinclair in a flurry of motion as these two lead wagons race free of the barrel turns and out onto the racetrack.

One of the outriders pulls his horse towards the starting line for the next race. 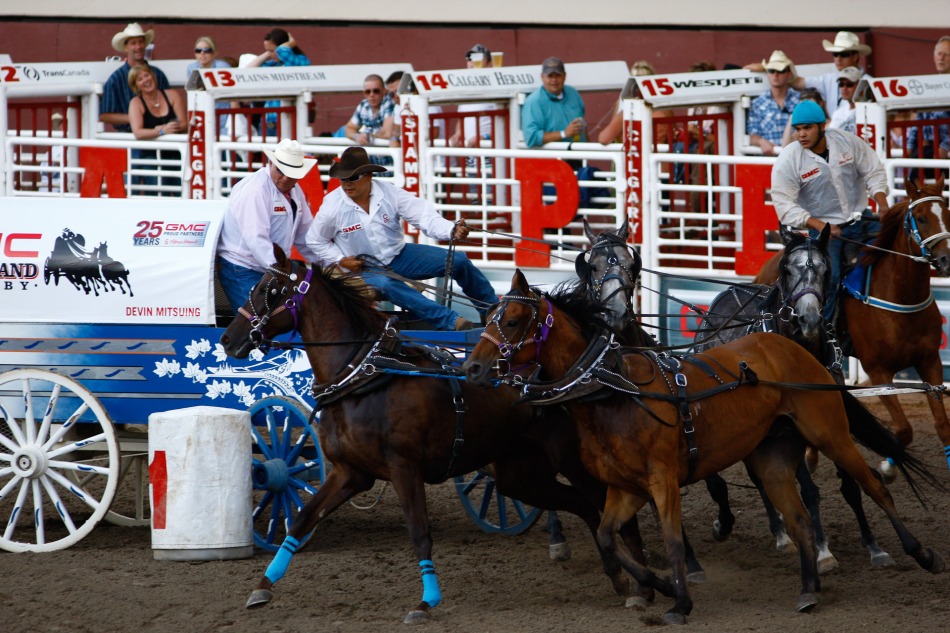 Devin Mitsuing rounds the one barrel during the demonstration race before the heats start.  The announcer narrates the race to help spectators new to the sport understand the rules and some of the nuances of chuckwagon racing.

The last image in this post is of Troy Dorchester as he rides by the crowd during the cool down trot following the race.

This year’s showdown final was great fun and was a fitting way to close out the Stampede sporting events just ahead of the last Grandstand Show and the fireworks display.  I am already looking forward to next year.