The emperors of the marsh 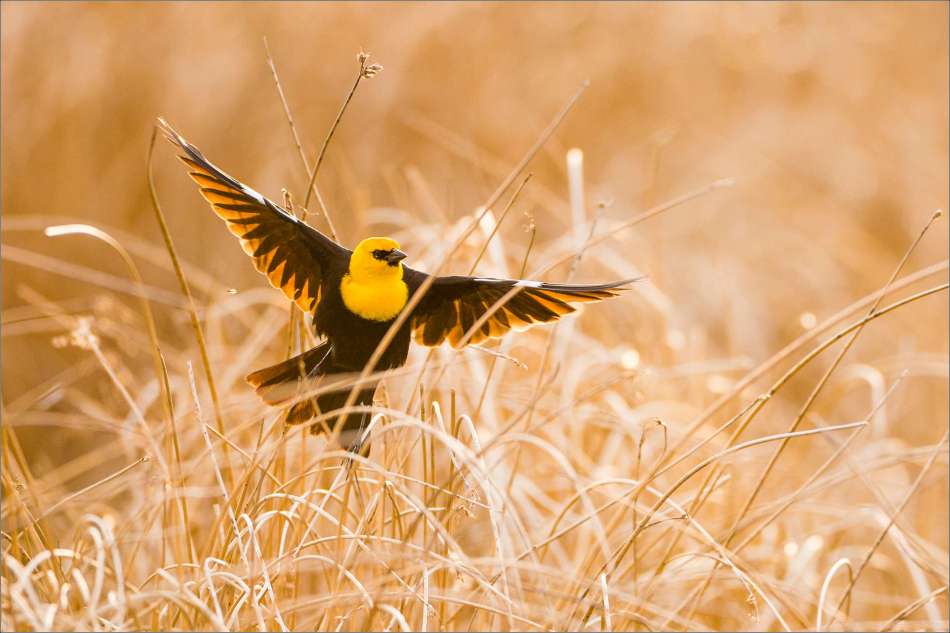 The Yellow-headed Blackbird (Xanthocephalus xanthocephalus) is a beautiful marsh dweller.  It also rules many of the prairie marshes it inhabits with an iron fist (or claw, as the case may be).  With smaller birds, like its cousin the Red-winged Blackbird, it will chase them off hounding them well past the edge of its nesting territory in the reeds.  Members of the heron family, gulls and coots will predate the nests and with these creatures the Yellow-heads will defend against very aggressively.

On the day I was at Frank Lake most of their activity was spent calling to one another and holding boundaries with other Yellow-headed neighbours. 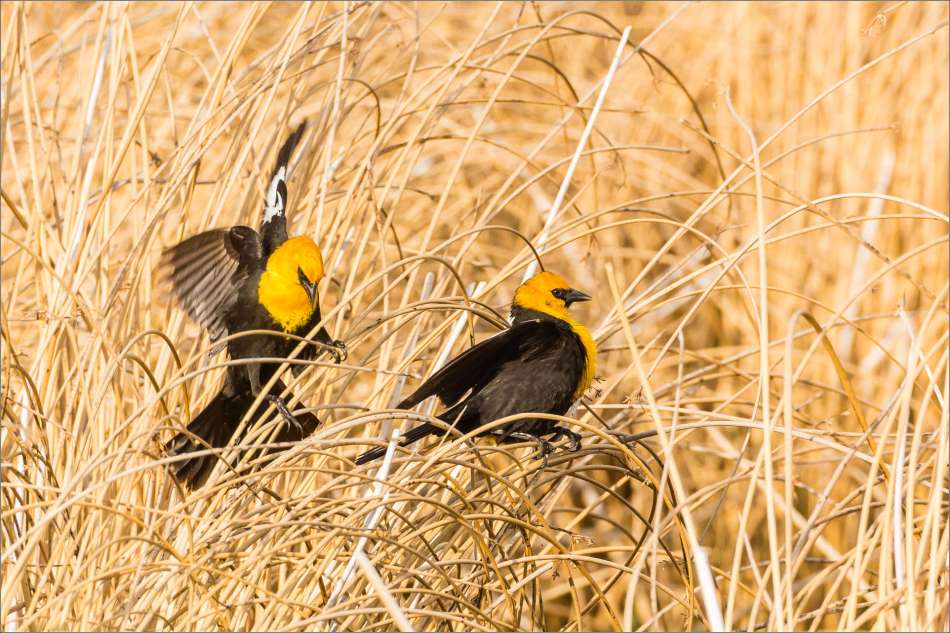 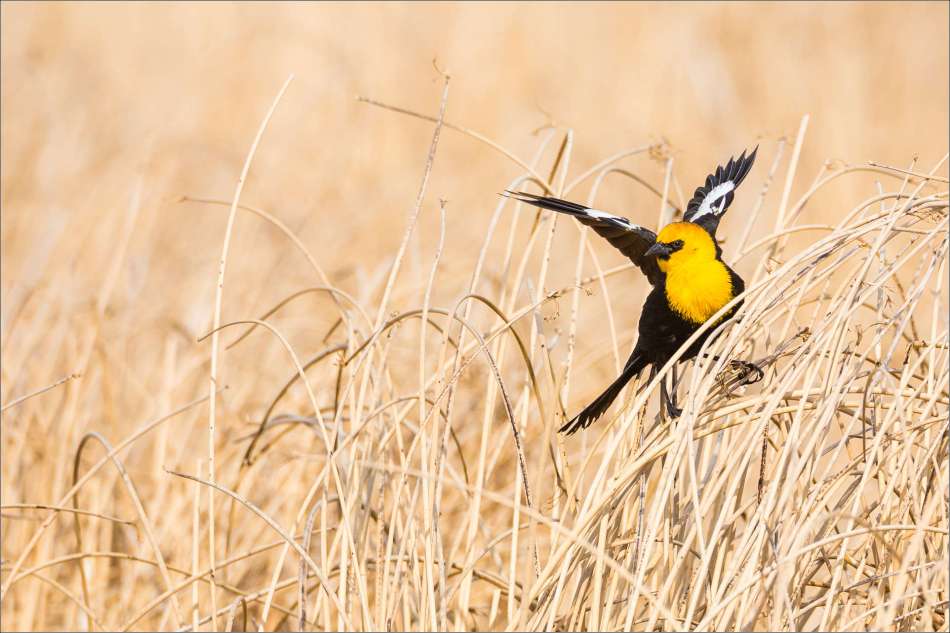 I think the females are on the nests now as I only saw males flying around.  The babies may have hatched already but if so, I would have expected to see some hungry predators.  The males defending their nests can be very dramatic but I was happy to not see any of these would-be egg thieves around.  They will come at some point so it was nice to see the Blackbirds having respite during a warm afternoon.  I enjoyed photographing them flying around and perching with great balance on the reeds waving around in the breeze. 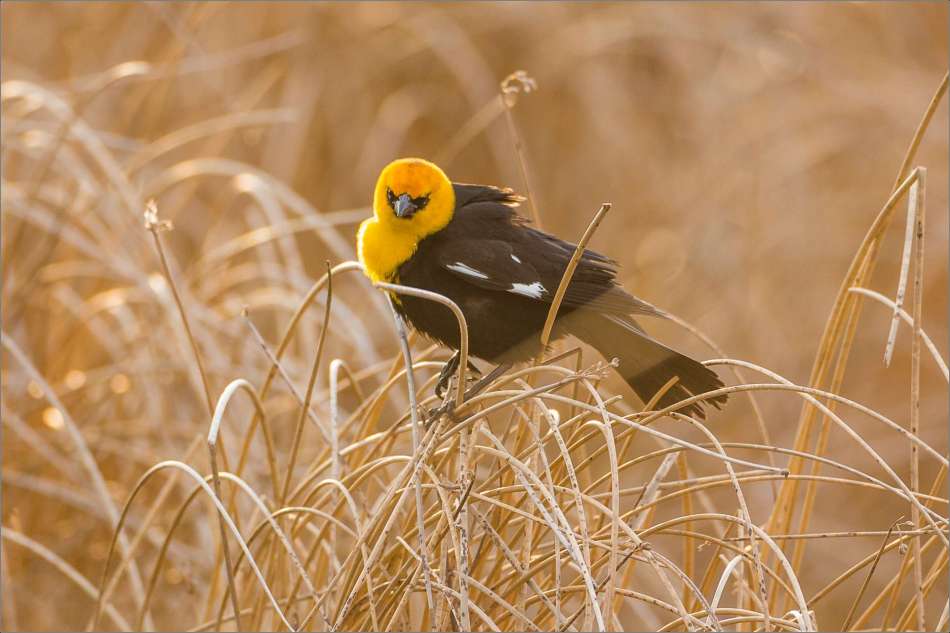 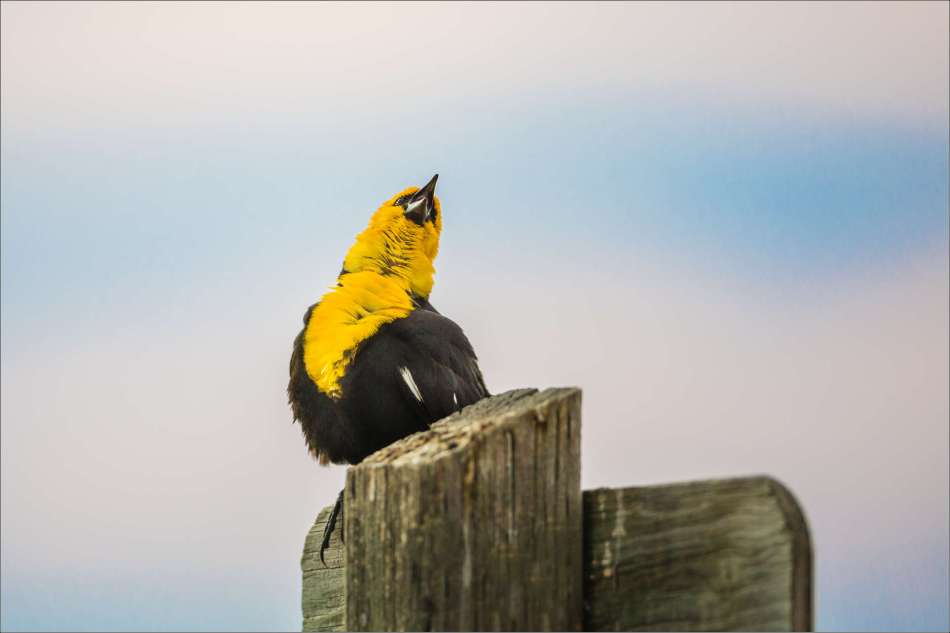 The nests are built over deeper water which helps keep curious creatures (animal and human) away.  I have seen the occasional person wading into reeds, presumably to look for nests and more reclusive birds, however the potential for disturbance is enormous and I am not comfortable with seeking out the next great photograph that way.  It is a personal choice but if you go in, learn all you can about the birds residing there beforehand so that you don’t inadvertently cause a nest to be abandoned, trampled or exposed to predators that come along afterwards.  I didn’t see any signs of people tramping through the large marsh around the Ducks Unlimited blind at the lake so I’m hopeful it will stay undisturbed through the nesting season. 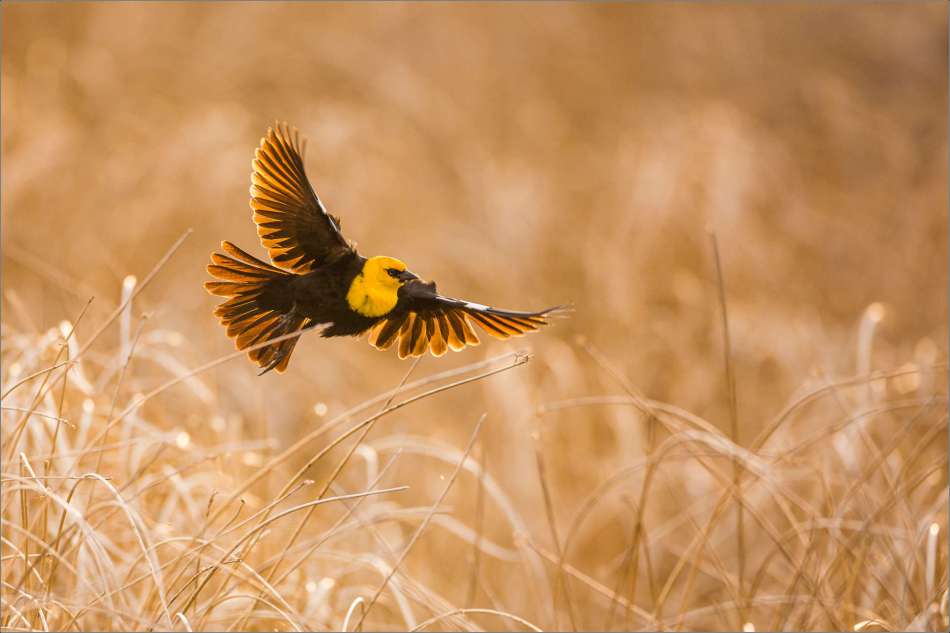 When I first went down to Frank Lake a couple of weekends ago, the American Avocets were the only shorebirds in the small marsh next to the large blind along the water.  When I returned at the end of that weekend, there were a couple of Black-necked Stilts (Himantopus mexicanus) that had joined the good times fishing in the shallows.

The two seemed like a couple as they never strayed to far from one another.  The females can be distinguished by brown-tinged upper parts, whereas the males are a solid black.  The difference was not easily seen but I think I could identify one male and one female.

These are cool little birds.  Striking in appearance and very interesting to watch as they stalk around a marsh.  I’m excited to find out whether chicks will be following these two around soon.

Almost every marsh or pond in the Foothills with cattails or some form of brush on the water’s edge is attended by one or more mating pairs of Red-winged Blackbird now.  They have returned from their winter south or west of Alberta over the past couple of weeks and are now setting up for the kids.  I love the energy that is growing now that spring is truly underway (in May, I know…)

This fellow flew within a few dozen yards to check me out.  He may have just thought that the tripod and long lens was overkill for his little pond but he hopped along the bullrushes nearby and then flew across the water to where I could see his mate was perched.

A really spectacular sunrise pulled me off the road on the way into Calgary this morning. 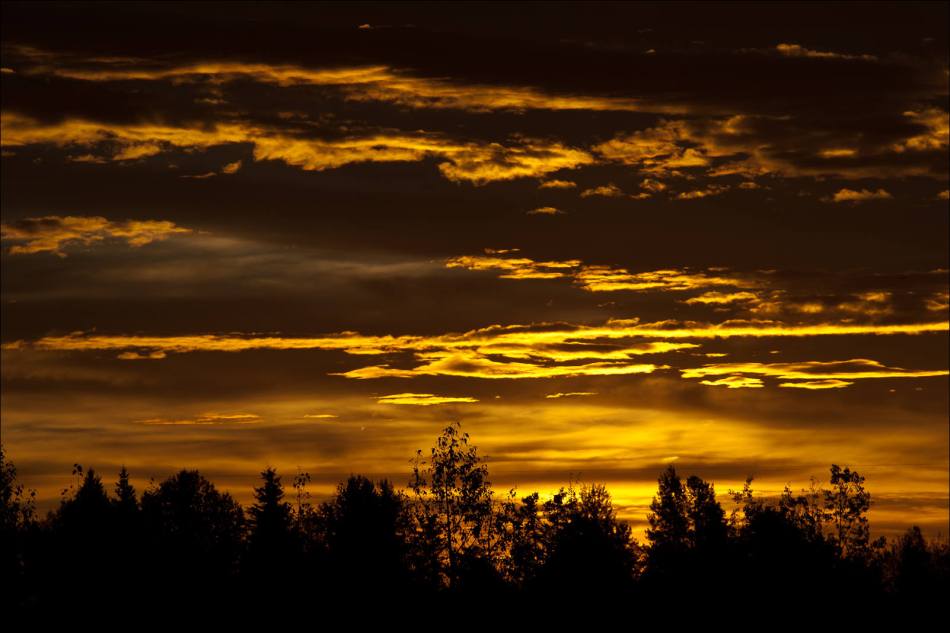 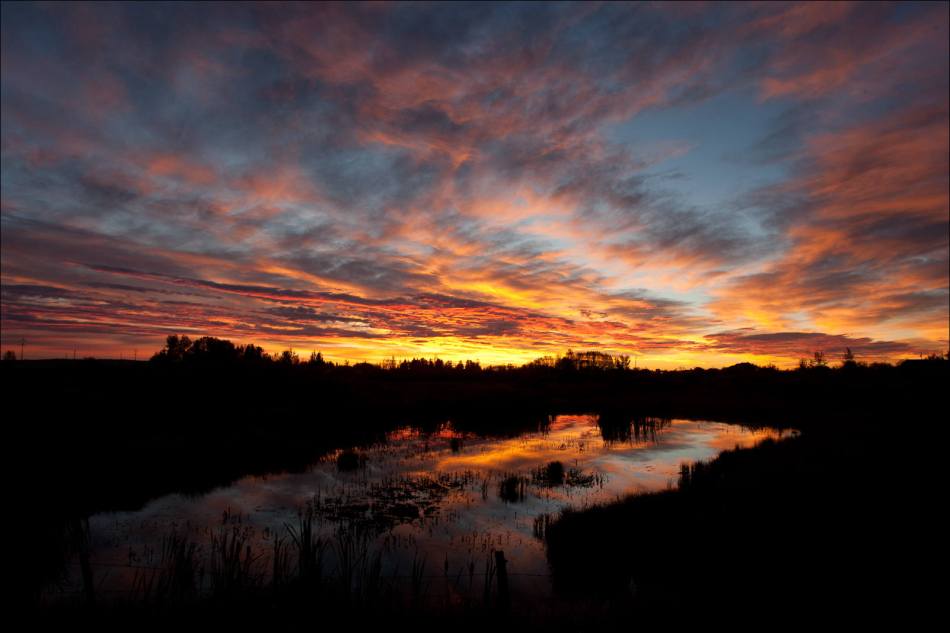 These photographs were made east of Bragg Creek along Highway 8 in Springbank, Alberta. 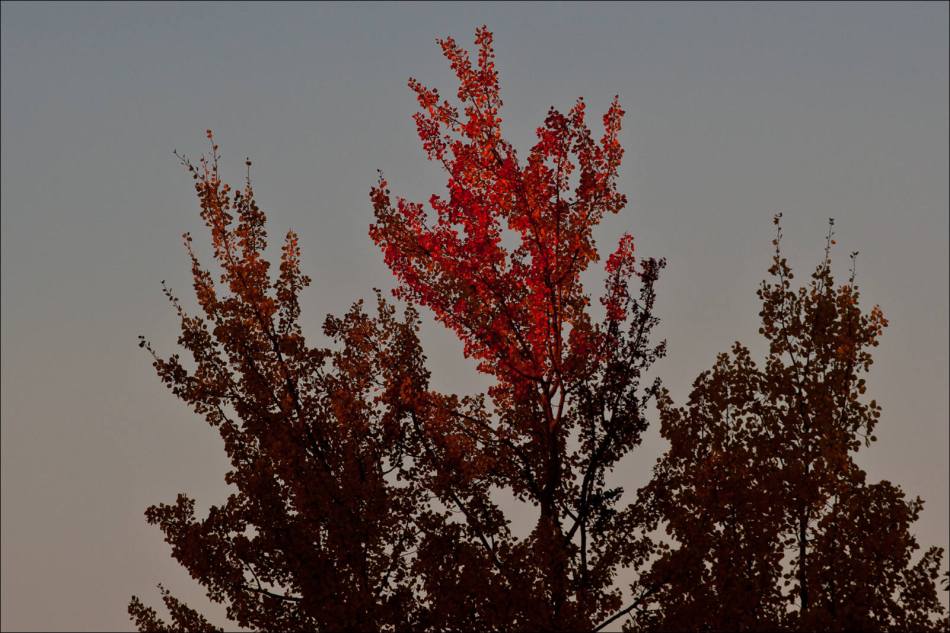