This weekend was the 41st annual Tsuu T’ina Nation’s Rodeo which draws First Nation people born to the saddle from all over North America.  The rodeo is held at the Redwood Meadows Arena which just across Highway 22 from my home.  This is one of my favourite rodeos and it was great to be able to be on the rails for the last day. 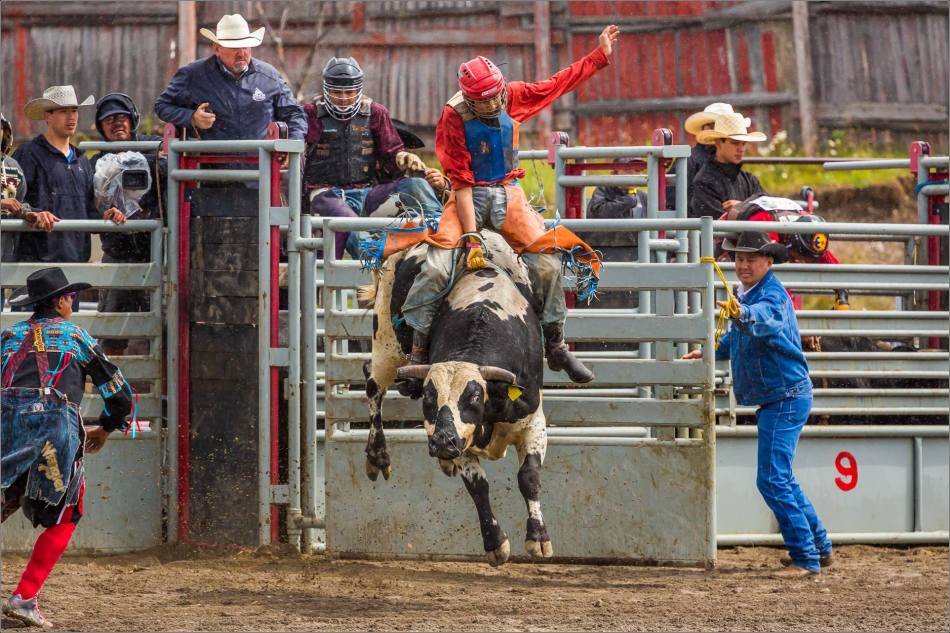 It was an afternoon that started with sun which gave way to heavy, heavy rain and ended with high clouds towards the end of the night.  Dynamic photographic opportunities came with the changing weather which was great for me.  Weather doesn’t make too much difference for the people or for the animals – they are all ready to go no matter what is going on above.  I have a stack of photographs to look at, and will share more soon, but wanted to get out this first image of one of the high-flying bull riders from a great afternoon in the Bragg Creek area.

(please click on an image to load a higher resolution version)

The finals of the Calgary Stampede’s Centennial Rodeo were a wet, muddy affair this afternoon.  It was awesome!  The last event was the Bull Riding Final.  Earlier in the day, the rain and mud seemed to work in the bull’s favour and of the ten cowboys that qualified for last day, only three of the four places in the final four were filled.  The other men were bucked off and did not get a shot at the $100,000.  In the final, luck stayed with the bulls and all three riders were thrown.  That meant another round of rides but adrenaline took over and you wouldn’t have known that these guys were each on their third bull of the day!  Shane Proctor, the 2011 Stampede Champion from Mooresville, North Carolina, got started and hung on from the side of the bull for the last two seconds to make full-time and earned a score of 66.50.  With the wet conditions and the ferocity of the animals, no one ruled out that as the winning ride even though the cowboy himself would have liked more.

Next up was Aaron Roy from Yellow Grass, Saskatchewan.  He rode beautifully aboard Risky Remedy and scored an 86.0.  He had great control and it was a ride worthy of a champion. 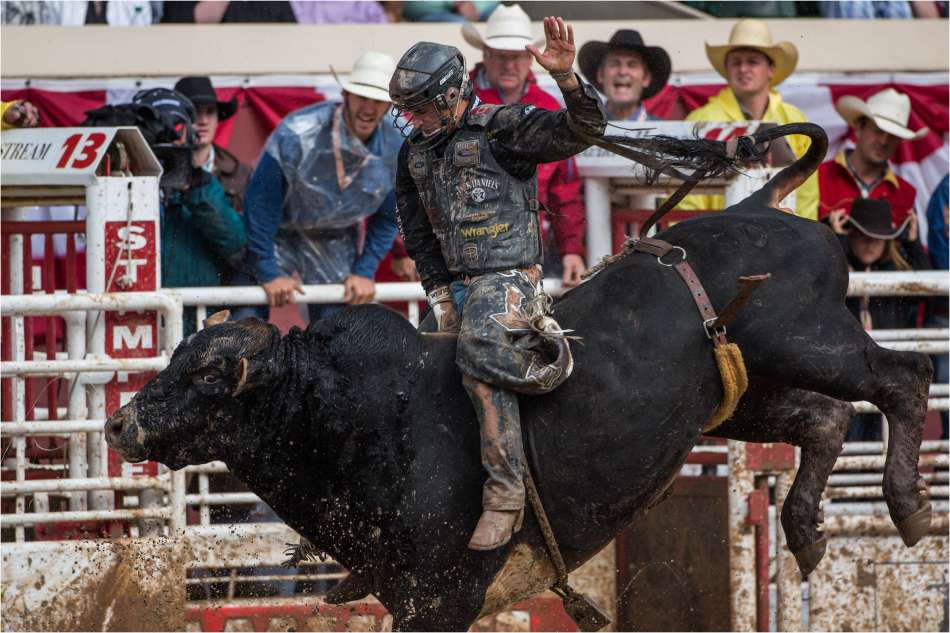 The final ride, barring a tie, was Chad Besplug riding on Kish This.  When the gate swung open, they came out like a huge whirling dervish.

Mud flying, cow jumping and spinning while the cowboy stayed balanced and rode out the madness. 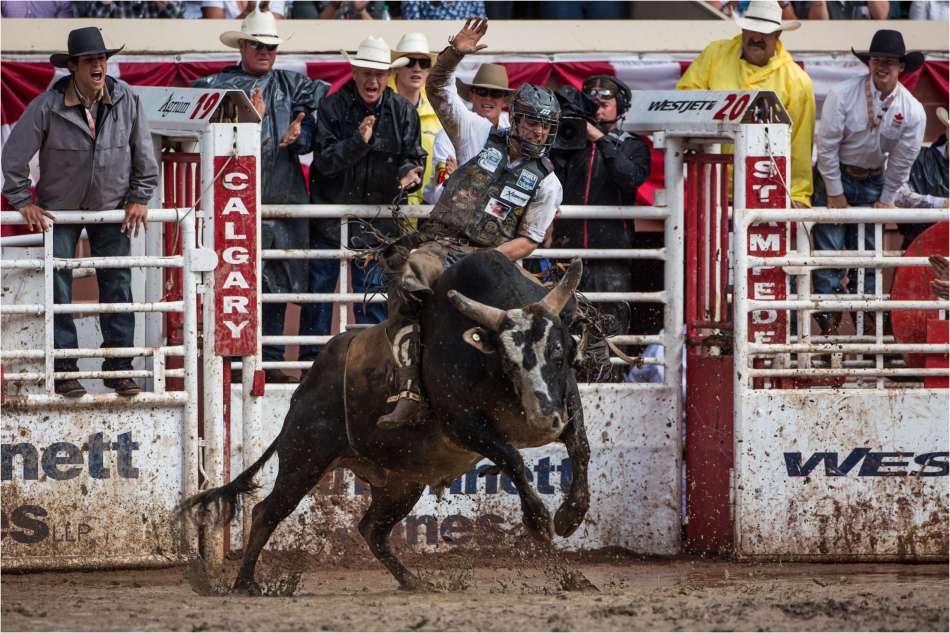 Chad won the battle and remained firmly in place past the horn.  He did end up getting thrown and went flying in the air a couple of seconds after time.

However, you have to get off a bull somehow and as long as you don’t get hurt doing it then it’s a good dismount. 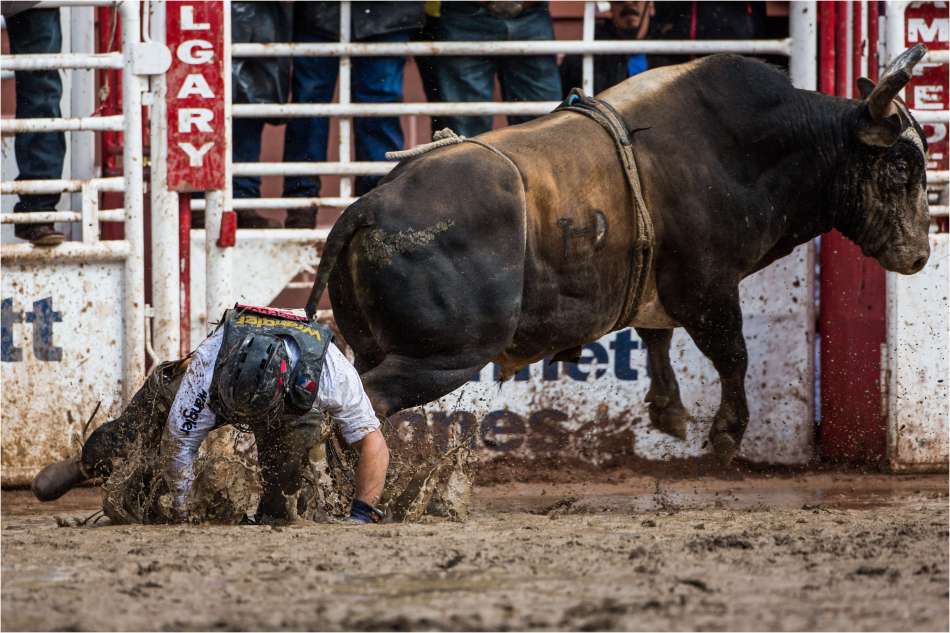 The crowd knew it was a great ride but it was not clear where his score would land.  Later, when he was being interviewed he said neither him or Aaron Roy were sure who won.  They had a minute to share a couple of words while the judges confirmed the score and shook hands agreeing that either one was deserving.  The score was an 87.0 and Chad Besplug earned the title of Calgary Stampede Bull Riding Champion for 2012.

The three rodeo clowns, who practice their craft of keeping the bull riders safe exceptionally well, were the first to congratulate the winner.

Then, as he crossed the infield, they tackled him into the muddy bog created by the rain that had just ended.  That was almost as much fun as the winning ride itself.

Congratulations Chad – well-earned and it is fantastic to have a Canadian champion on the 100th anniversary of the Calgary Stampede!