Dippers and their questionable behavior 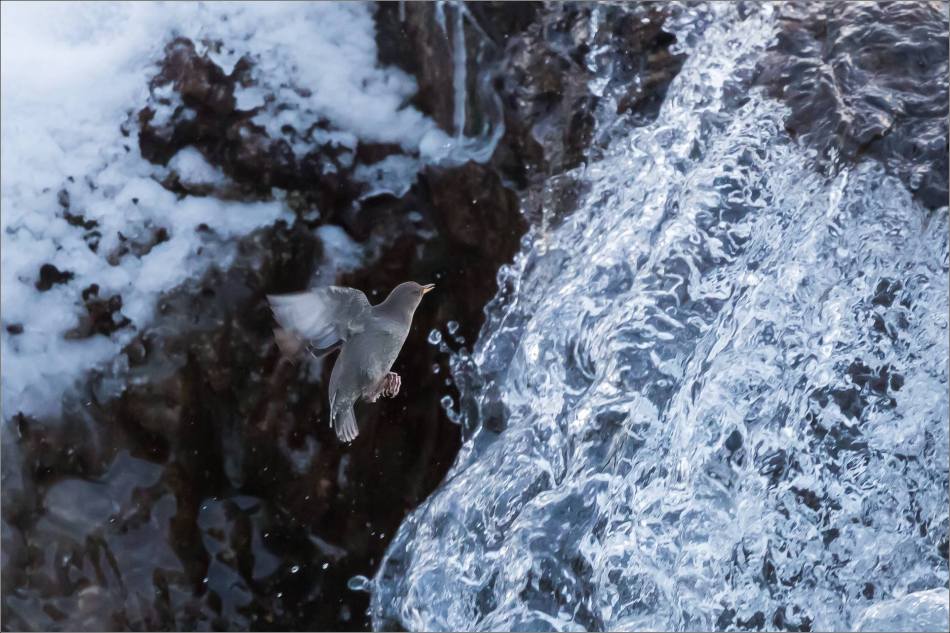 Not bad behavior, just one that I don’t pretend to understand.  When I was last at Elbow Falls, I photographed two American dippers as they flew, dove and splashed around the fast-moving water.  Along the way, one of the birds flew to an overhang beside the edge of the waterfall, and then slid on the ice before finding purchase in the snow.

It paused for a moment and then flew at the waterfall!

The bird flapped its wings to hover for several seconds only a few inches from the water where it fell over the edge.  I don’t know if it was looking for insects behind the water – surely not in the water itself!  Likely it was something else, maybe even simple curiosity or just because it could do it.  It was unusual and really fantastic to watch. 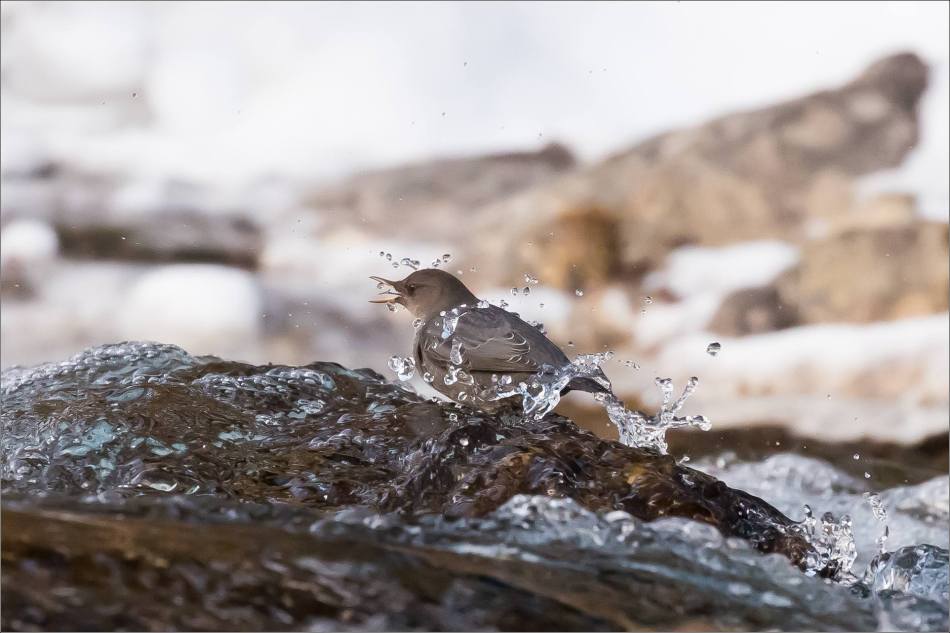 American dippers are year round residents below the Elbow Falls.  When I was there before sunrise, I could hear an occasional chitter from one pair as they flew up and downstream.  As the day brightened I saw them a couple of times while I was photographing the landscape around the waterfall. 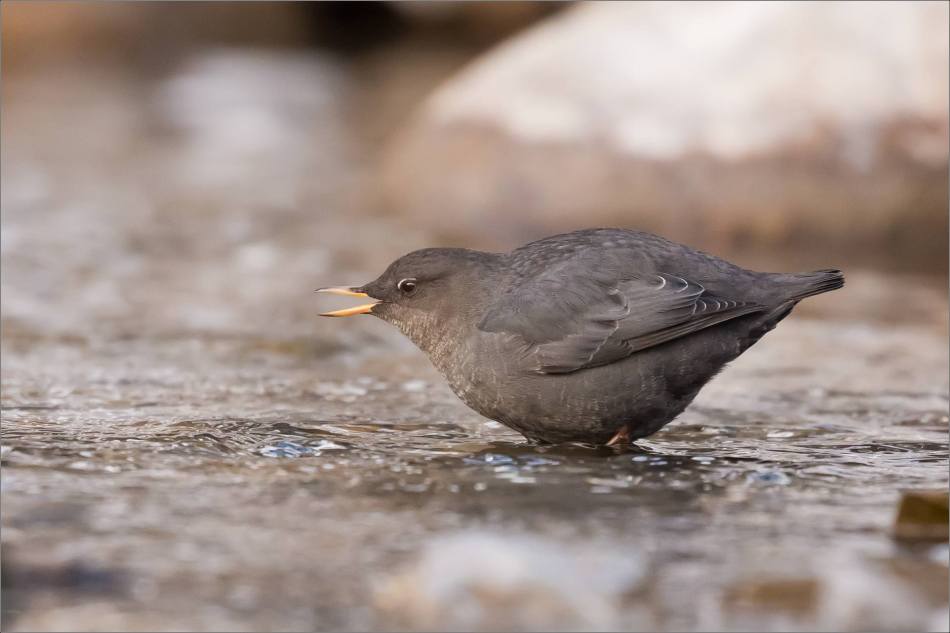 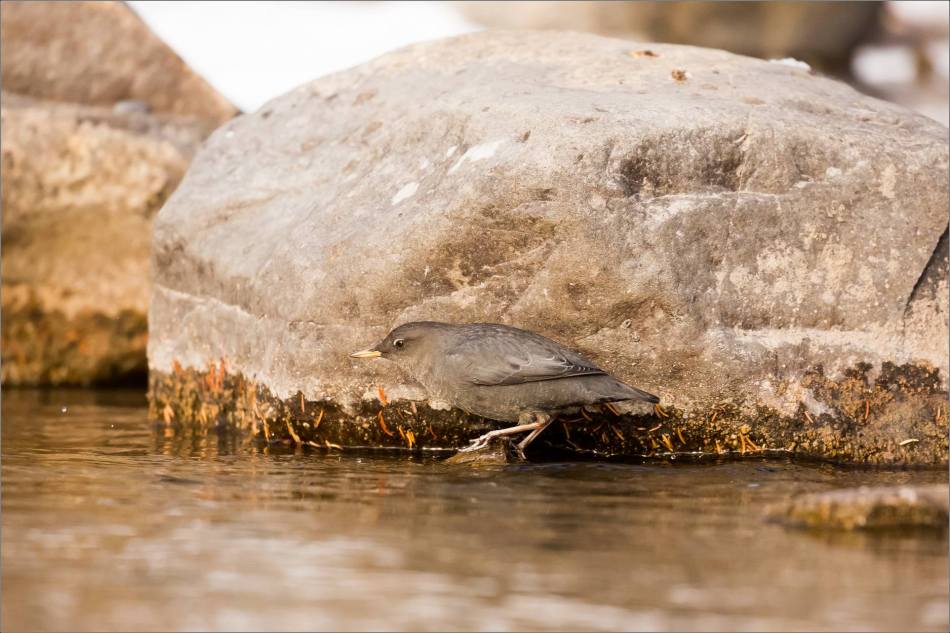 I shifted my attention to them and had two lengthy sessions photographing them.  The first began when I was taking the last couple of shots above the falls and noticed one dipper fishing in the small rapids there.  The bird splashed here and there, submerged in the flowing water and managed to hunt down a good number of insects in there.  After several minutes, breakfast concluded and the bird flew down the river and quickly went out of sight.

An hour’s wait separated me form the second encounter.  Eventually one of the dippers flew by and landed at rapids upstream from the falls.  That was too far for any reasonably interesting photographs but a second dipper followed only a little while later.  This one returned to pools above the waterfall which I have enjoyed watching them at often.  When the bird alighted in the water this time, I laid down on the snow to get close to eye level with the little bird.  I was well rewarded as it soon chose to ignore me and walked close by.

An American dipper in the cold mist

The quick stab of wintry weather last weekend reminded me of a visit to the Vermilion Lakes in January.  It was cold, -25°C cold, but this American dipper flitted around the pond with the energy typical of this species.

This was a welcome distraction from my wait for daybreak, still 15 minutes away, so I switched to a telephoto lens and photographed the comings and goings for a little while.  Hot springs seep out of the hillside and run into the pond which keeps sections ice-free throughout the winter and creates the hazy mist that rolls in slow motion waves across the water.  It was a beautiful spot to be on a frigid morning – even when my fingers might argue it was not worth it, I believe it was. 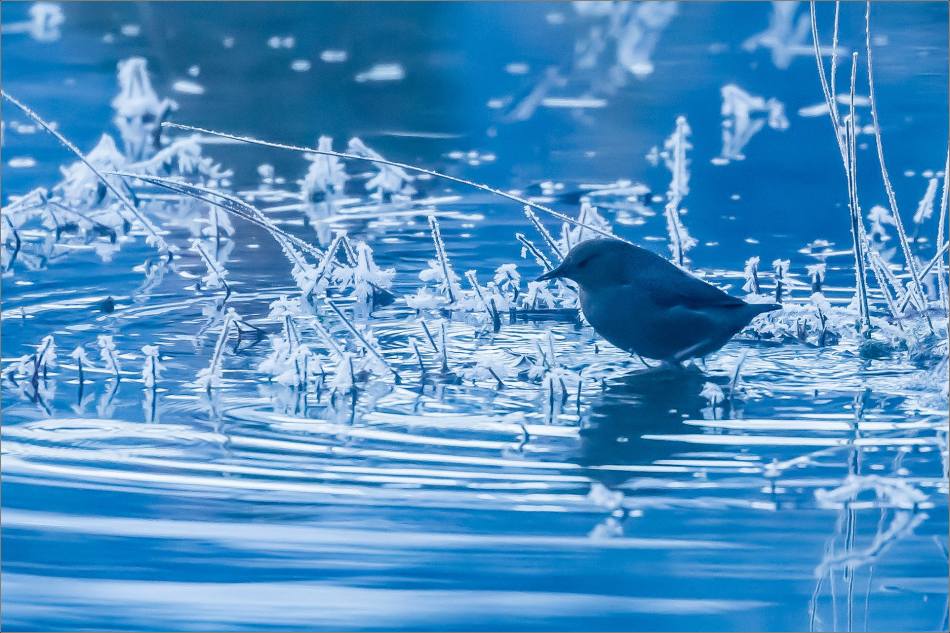 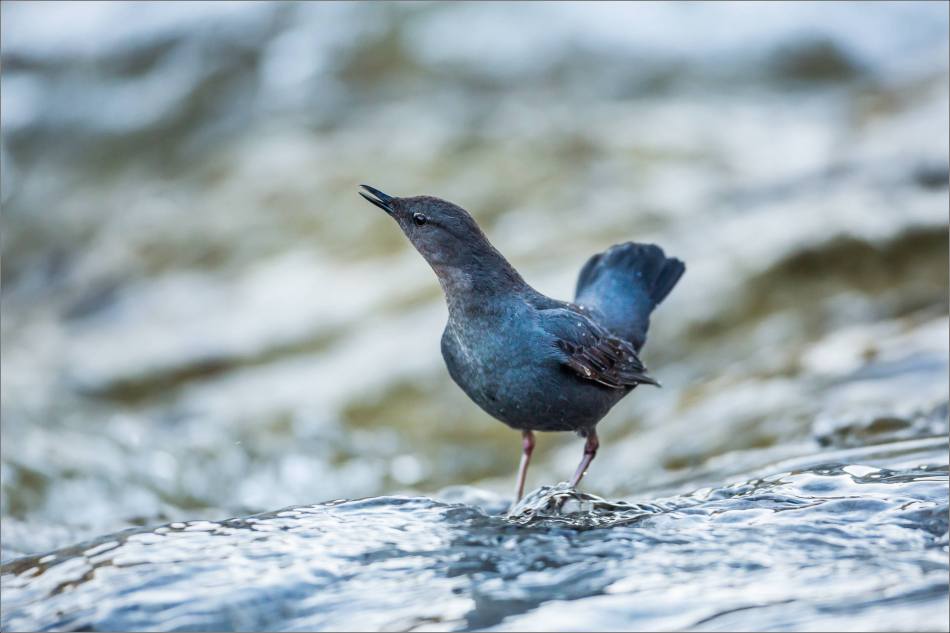 I went up to Elbow Falls last weekend for the sunrise but I stayed for the American Dippers (Cinclus mexicanus).

I love watching these aquatically adept birds stalking, diving and swimming in the middle of the rapids.  On the last visit to the waterfall, there were three Dippers flitting about moving between the bottom of the waterfall and the rocks at the top. 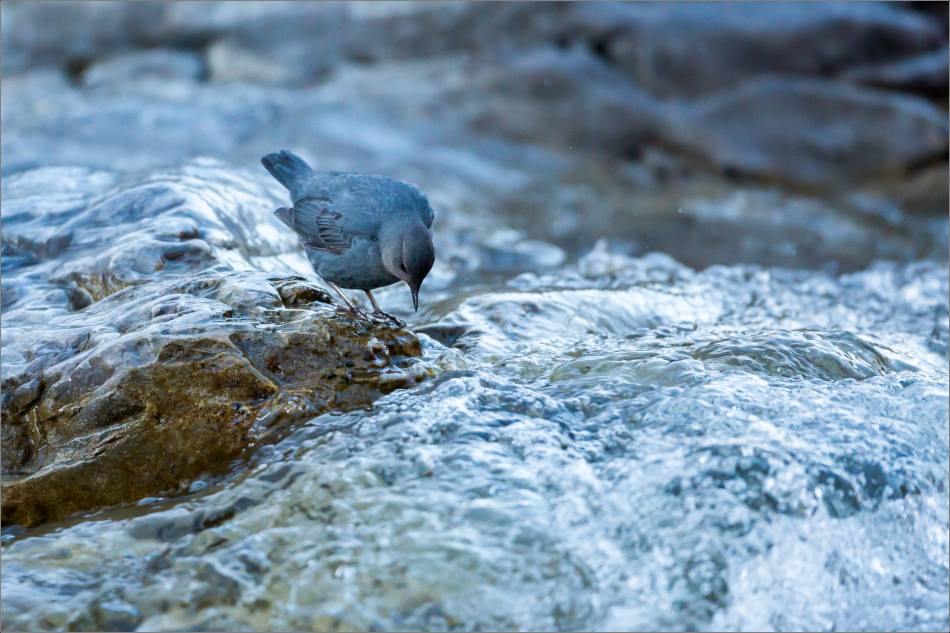 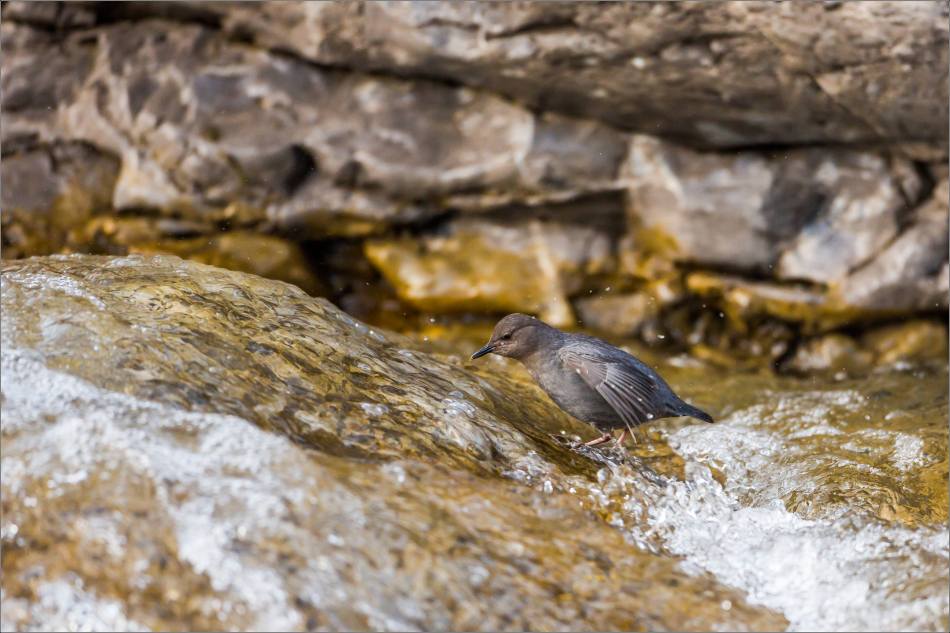 They chased each other down river a couple of times but spent most of their time fishing alone.  On a quiet morning in Kananaskis, it was nice to spend my time watching them. 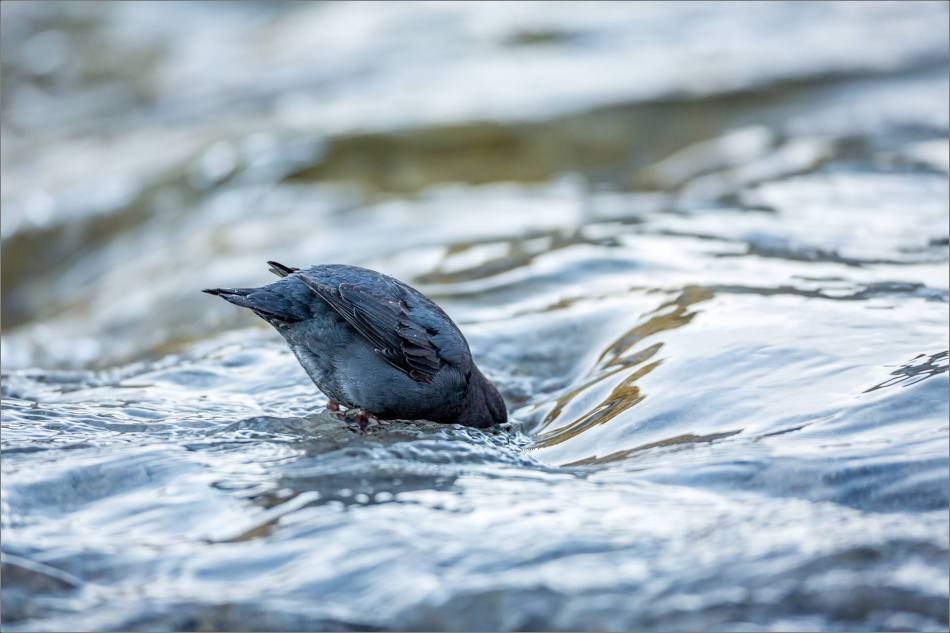 American Dipper on the Ice in Banff

On Third Vermilion Lake where the hot spring creates a break in the ice I found an American Dipper diving for food, hopping in the reeds and seemingly enjoying the warm water.  I caught it during a quiet moment along the edge of the ice.  The Vermilion Lakes are just west of Banff (a 10 minute ride) in the National Park.  Moose, deer, eagles and ravens can be seen year round along the lakes.  And, dippers – where there is some warm water.