I was in the Tonquin Valley west of Jasper last year and on the first evening along Amethyst Lake, I had an opportunity to photograph a pair of forest caribou (R. tarandus caribou).  I had never seen this distinct species of deer in the wild before.  This cow had led her calf down to the wildflower meadows along the shoreline and they grazed with enthusiasm while I hovered around a 100 yards away.

Our guide had said there was a grizzly roaming around the lake under The Ramparts and the caribou were wary as a result.  We didn’t see the young boar until the next day when we were photographing landscapes on the far side of the valley.  We were universally facing south photographing the mountains closing the southern end of the Tonquin as seen below.

I looked around at one point and my eyes caught sight of a large bear shuffling over the field of boulders a couple of hundred metres behind us.  He headed off when he saw us staring his way.  We walked parallel for a while before losing sight of him.  He had picked up speed and swam across a shallow gap and galloped into the trees there.

Another place that I’m excited to return to sooner than later.

Being able to spend three nights in the Tonquin Valley allowed three chances to have great light in the morning.  The landscape around the valley is honestly spectacular in every direction.  The Ramparts, an iconic chain of peaks that string together the length of the valley, rise sharply up from the western shoreline of Amethyst Lake while there is a band of forested hills separating the shore from the sharp ridges that form the eastern edge of the valley.

The rocks, water, mountains and snow can be combined beautifully when photographing in the valley during the day with imagination being the only limitation during the daylight hours.   However, adding in dramatic light when the clouds decide to play along provides a magical element to work with in the images.  For two of the three mornings I was in the valley, there were moments where the sunlight crept under the blanket of clouds and the pinks and reds of the early morning shone through.

An incredible place to spend some time.

Gavriel and I were working on compositions with two students among these large boulders when I noticed this young grizzly boar shuffling nearby.  He was up wind so he had not caught our scent and we were grouped on the far side of a house-sized rock so he hadn’t seen us yet.  I climbed higher on the rock and had a great view of the bear.

He didn’t come too much closer before he noticed us.  Some people still think bears don’t see well but they are wrong – this fellow caught sight of me from a couple of hundred meters away. 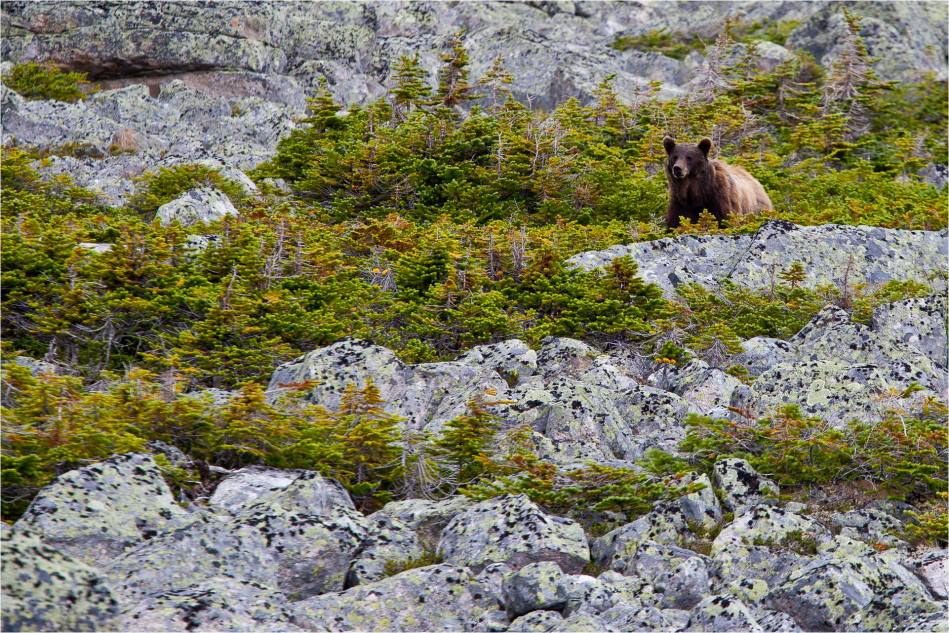 Our group of six photographers watched (and photographed) as he turned towards the shoreline and then walked parallel to our group along the isthmus dividing the two sections of Amethyst Lake.  We walked to higher ground for a better vantage point and found him loping towards the river.

He dove in and swam across to the foot of The Ramparts where he walked along the far shoreline away from us.  In the image below he is just clear of the water and looking back in our direction.  I kept an eye out for him for the next couple of days that we were in the valley but did not come across him again.  A beautiful bear, I hope he’s able to fatten up in the next month before the snow starts to stick on the ground again.

I was on a horse for 6 hours last week to travel into the Tonquin Valley west of Jasper in the Canadian Rockies.  I was working with a great group of people on a photography tour and we had a lot of fun (that dimmed a bit when the snow and rain were pelting us for the last two hours of the ride but spirits returned when we got into camp).  The mountains on the western side of the valley are collectively known as The Ramparts.  They rise straight up from the edge of the two lakes in the valley, Amethyst Lake and Moat Lake, and are spectacular. 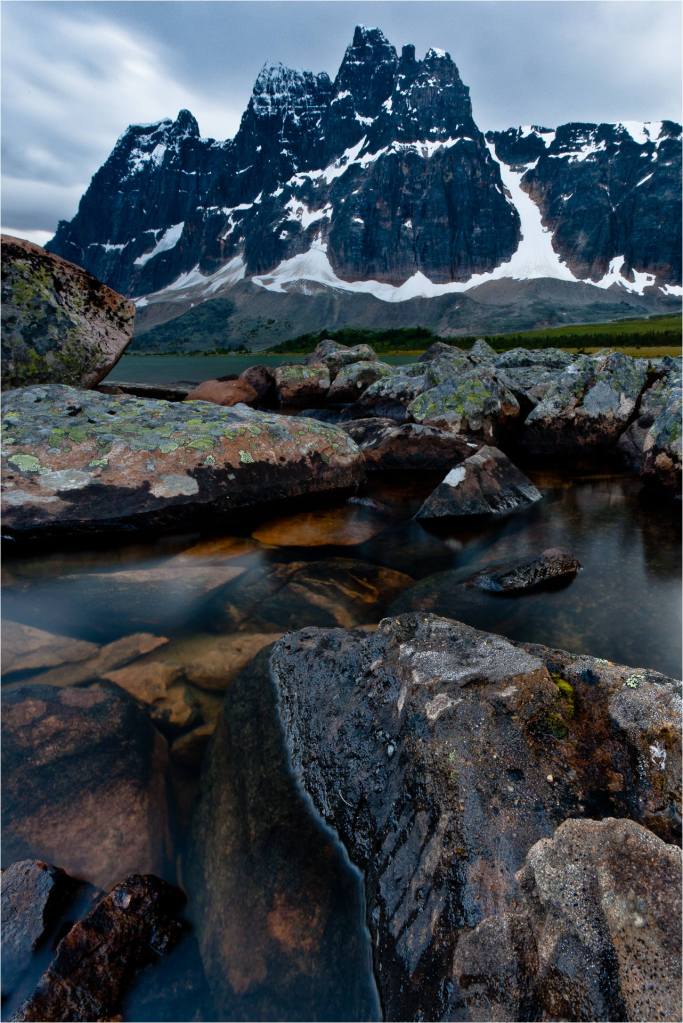 The first evening and the next day we had overcast skies which reinforced the forbidding nature of the peaks.  These images are from my first two sessions on the lakeshore getting familiar with the landscape. 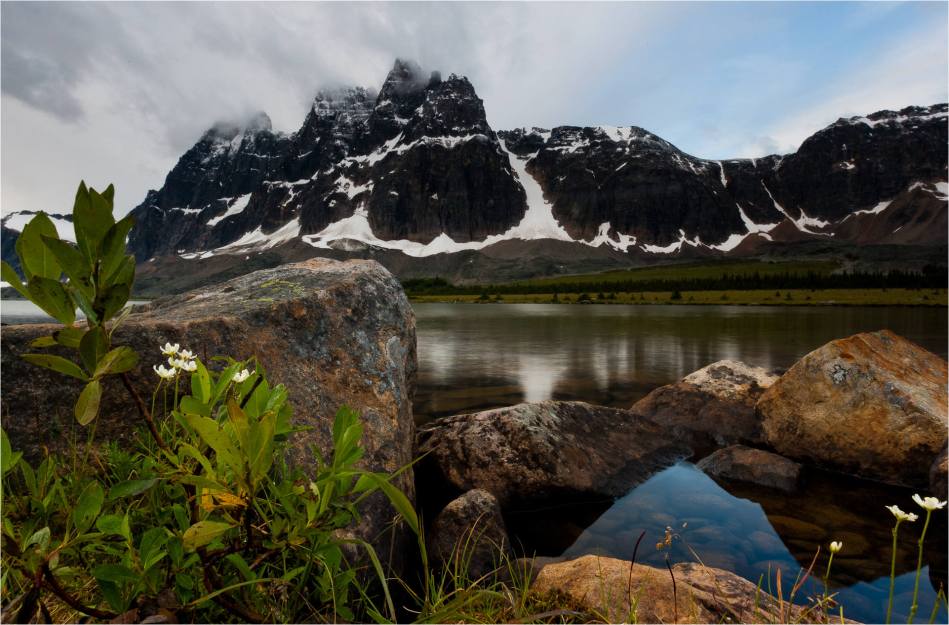 Framing the peaks with the rocks provides a sense of the area and with the beautiful lichens add nice color to the scene.

The following two days that we stayed in the Tonquin Valley, the weather picked up pace, changing from snow to rain to sun steadily.  The resulting light played wonderfully with the landscape and I look forward to sharing those images in the next couple of posts. 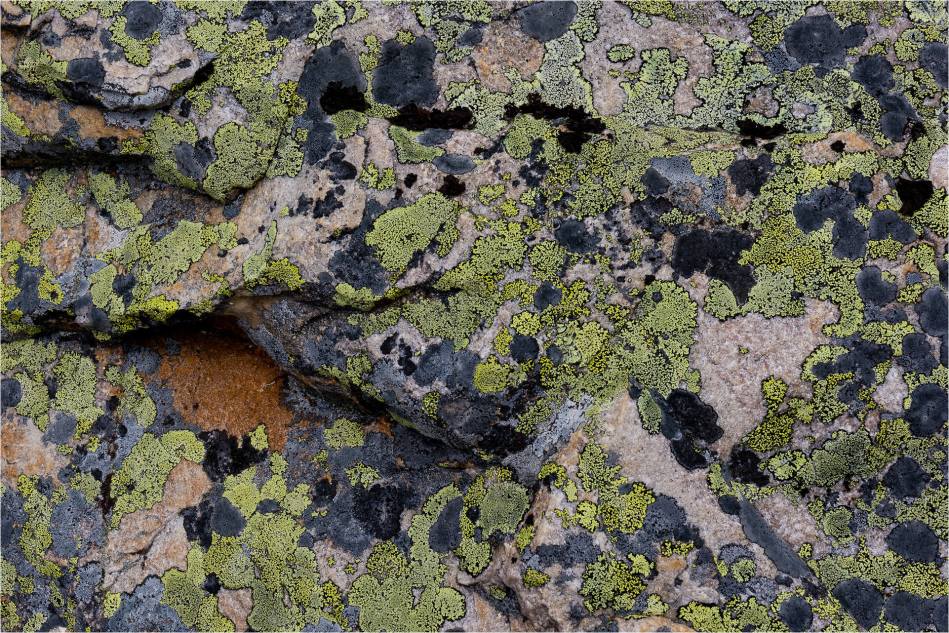