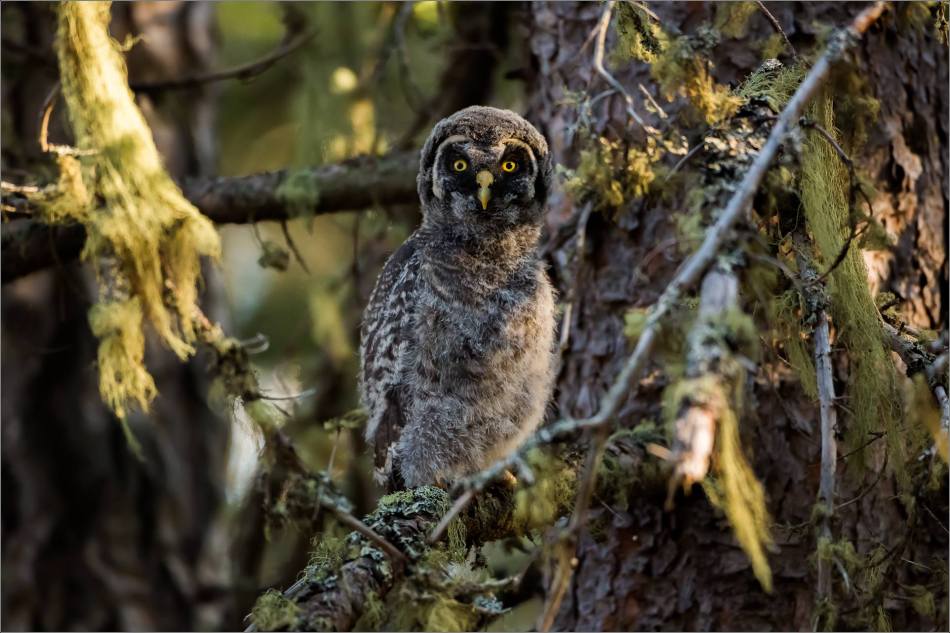 On a walk a couple of weeks ago I came across a Great gray owl nest in Bragg Creek.  I had noticed an owl perched high up in a tree and while watching it, I heard its very soft hooting, about 10 seconds apart – almost like a slow, steady beat which was not a vocalization I was familiar with.  A bit of motion higher up in another tree about 50′ away drew my attention and I could see two owlets in a large nest.  The activity was the larger one spreading, and flapping, its wings.  The vocalization seemed like a steady reassurance to the owlets that mom was close by.

I’m always a bit anxious when I find a nest as I don’t want to stress the chicks or, in a very much worst case scenario, cause the parents to abandon them.  This nest was very high up and the mature owl did not appear to be agitated so I took a few photographs and then carried on my way.  The sight lines to the nest were not great but I planned to come back in a couple of weeks to see how the little ones were doing.

Earlier this week, I returned to the path and walked back towards the nest.  Rounding a corner, another flutter of activity caught my eye.  This time, it was not at the nest as I had been expecting but about 30′ off of the ground in a tree neighbouring the nest’s holder.  It took me a second before I realized it was one of the chicks perched on a branch flapping its wings for balance.  I looked around and soon spied one of the parents perched in an aspen watching intently.  It seemed the owlet had left the nest at some very recent point, and was making its way to the forest floor.  That’s being a bit kind – as I watched for the next couple of minutes it somersaulted, tumbled, grabbed and slid its way down the branches in a series of 3 to 6′ drops until it half flew, half crashed to the ground.  I had my longest lens on a tripod and was set up to watch this even from my spot about 150′ away.  The birds hadn’t noticed me as all of their attention was presumably consumed by this flight of the still mostly flightless owlet.

The little owl righted itself and peered around to get its bearings.  I moved up the path a little ways which gave me a good line to the bird and we stared at one another for a few seconds.  Mother dropped down to a fallen tree and the little one jump/flew over to it.  The two of them moved off to the side towards a bit of an opening in the trees. 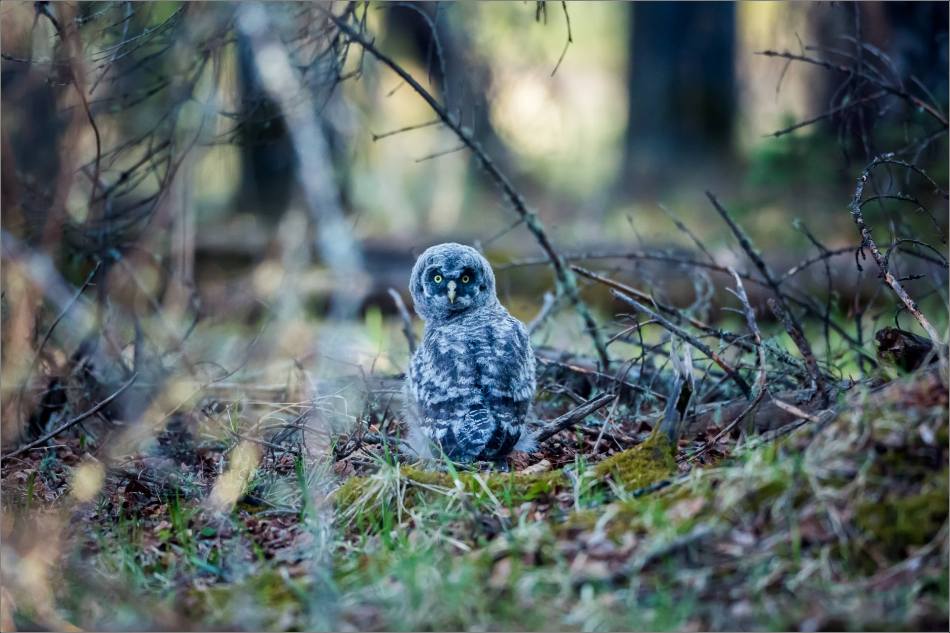 I lost sight of them and was picking up my tripod to see if a spot a little further up the trail might afford a better view when I looked up and saw the second owlet (the first picture in this story and the one below).  About 20′ away, perched about 12′ off the ground and staring at me.  I retreated to the edge of the trail, set up again and was able to photograph this beautiful creature.

All the while I could hear the other owlet flitting about and crashing around in the underbrush.  I circled away from the smaller owl in front of me and found a great spot a good distance from that owl with a nice view of the first one I had seen fall out of the tree.  It had now managed to fly up to a bent branch about 8′ off the ground.  Its mom was perched 5′ directly above that on another aspen.  I closed to about 80′ away and watched them for several minutes.  The highlight was when the father swooped in and fed the owlet a mouse.  The actually handoff (beak off?) happened just out of sight from my position so I didn’t photograph it but it was so cool to see.  The father flew off back towards the nearby fields and the mother found a new perch a little higher up.  I left the chick in its spot watching me languidly as it digested supper. 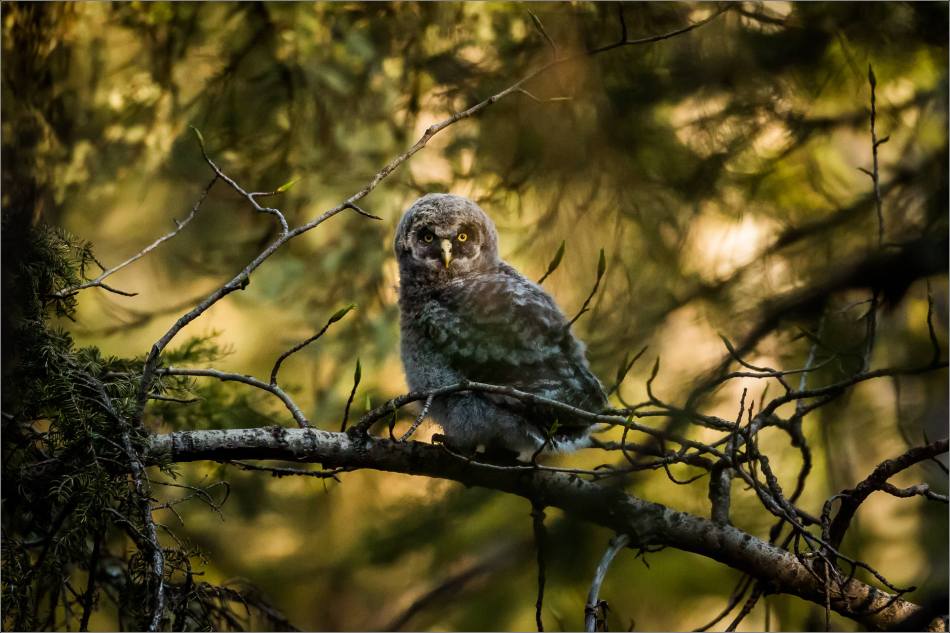 I checked on the second owl, which was noticeably smaller than the other, and it was still in the same spot.  The sun had dropped and was tracing an outline of the bird’s profile which I found to be appealing. 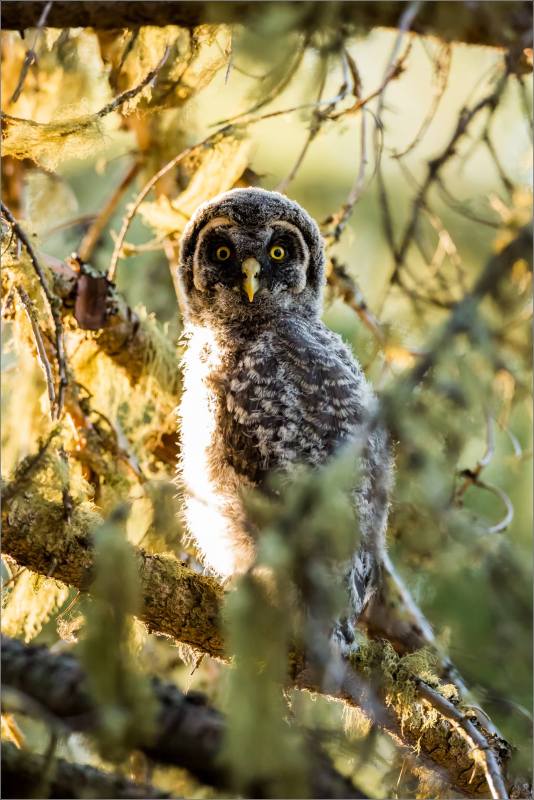 One of the parents had flown to a perch nearby and was watching this owlet.  My ears picked up the soft, steady hooting once more and I thought that was the right time to leave the family to themselves.  I had no interest in delaying this one’s supper as I expected the next mouse caught would be hers (or his). 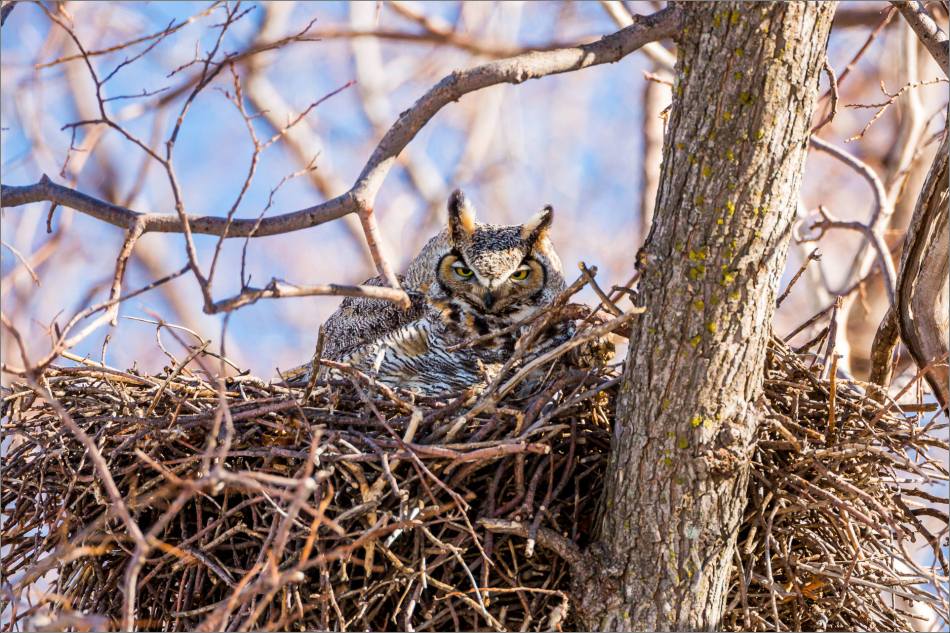 A nest east of High River that I have watched for a few years is home to a new brood of Great Horned Owl (Bubo virginianus) owlets again this spring.  I went on a backroad tour last weekend and when I saw the nest occupied I set up the long lens and watched the owl as it dozed.  I watched her shift her weight around a few times and hoped that there were nestlings who might want to peek out from under their feathery blanket.  It didn’t take too long for one and then two of these babies to have a look around.

On this latest visit, a fellow admirer told me that the nest has been used to raise owlets annually for over forty years.  I love that and it makes sense as the nest is in a great location with access to fields, shade, protection and seemingly all of the things that make for a good home.

A couple more photographs from the visit. 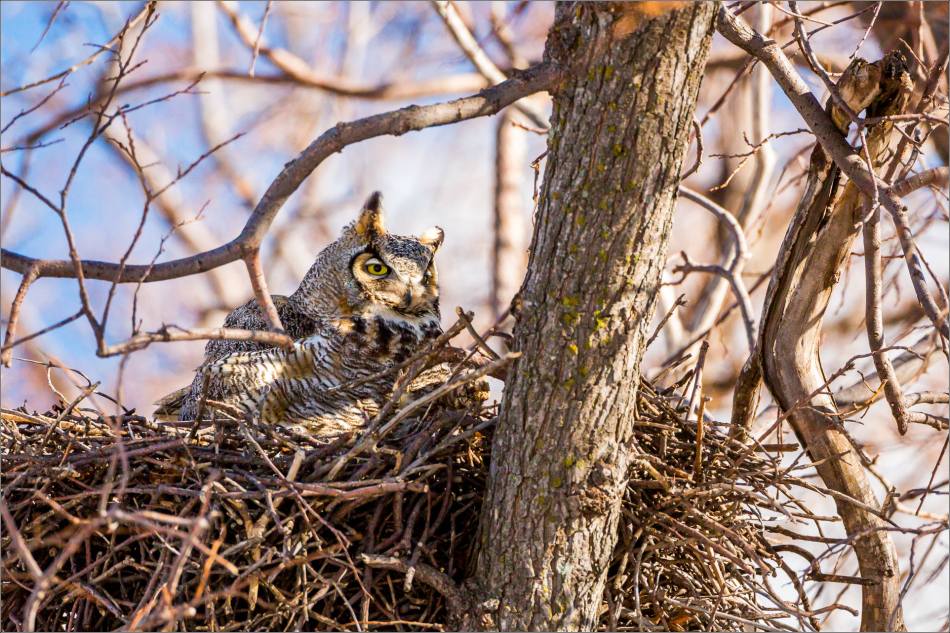