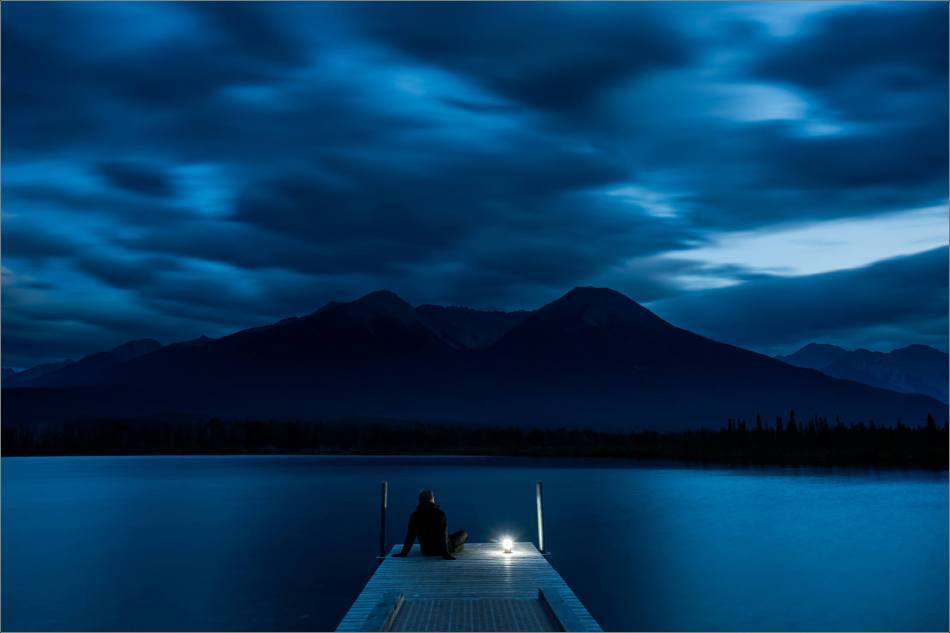 Watching the last light of the day slip away to the west from one of the piers on the Vermilion Lakes.  I was reminded of this night scene from August when I was waiting for dawn near the same place last weekend.

Down the alleys with a superhero 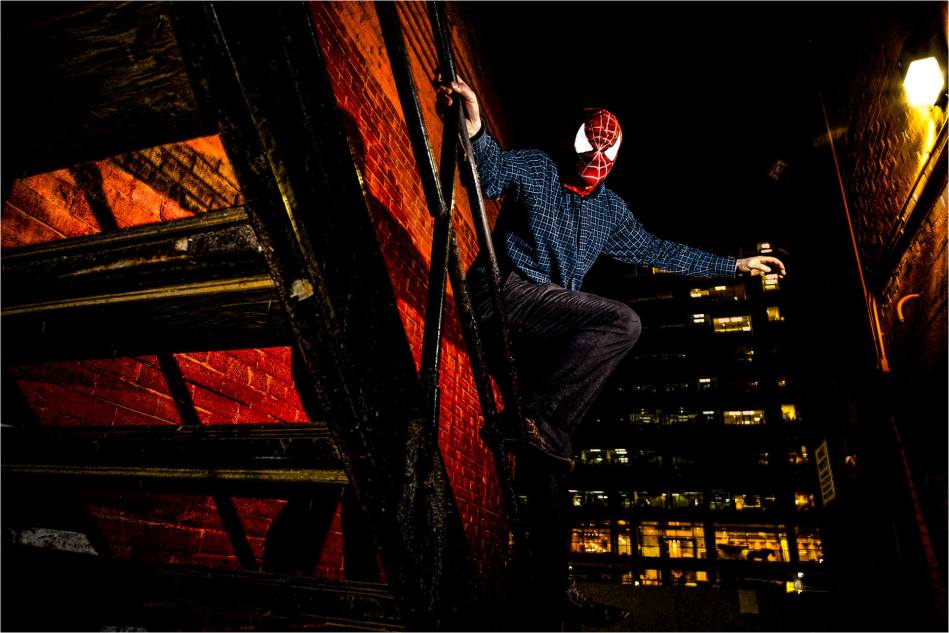 Thursday night I was downtown photographing night scenes.  Hunched over my camera, concentrating on some abstract composition my attention was torn away by a blur of motion above me.  Looking up, I saw a flash of red and then… nothing.

I climbed up a fire escape on a lovely old brick building and that’s when I had a good look at the cause of my distraction.  He landed on the flight of stairs above and then leaped over the railing (as seen above).

At this point he was well positioned for an action pose and I managed to take one photo as he was staring at me.  A second later and he was scaling another wall up towards the roof top. Keeping up to him without a jet pack, flying surfboard or some other speedy contraption was unlikely so I just stood and watched as he spun a web and swung out of sight.

I went back down the escape and walked around the corner keeping an eye out for the webbed one.  I turned around intent on heading up the alley and saw him scaling a brick wall.  After clearing the doorway our neighbourhood friend launched upwards into the darkness where I lost him again. 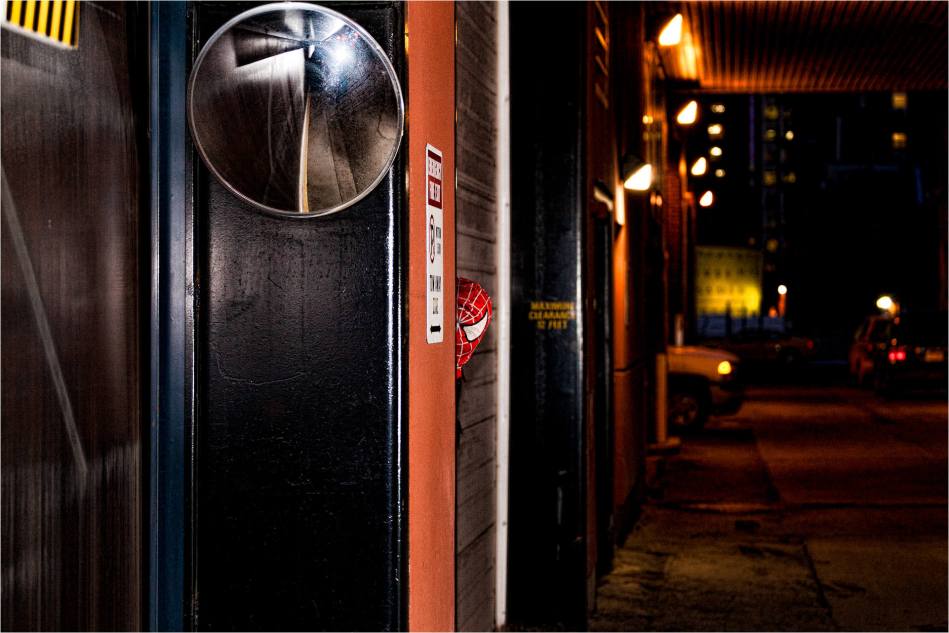 I didn’t see the masked vigilante for a little while and thought he might have gone.  I was heading back to my car when I looked back over my shoulder and caught a sliver of his mask peering around a gate entrance.  I carried on to my car in one of the city’s underground parkades and was still rather surprised when the man spider ran down a line of parked cars and vaulted over my car.  I wish I had captured the whole sequence but I was only able to take one sharp shot.

At that point I was thinking that my chance encounter wasn’t chance.  I know photography was one of this particular superhero’s interests but I can’t say whether he was watching me out of curiosity about just what I was photographing or if he thought I may be a villain up to no good.  I should have asked, not that it was likely he would have responded.  When I pulled out of the garage, I had one last good look at this mysterious fellow.

I wasn’t thinking about it in the moment but, looking at the pictures, I wonder why he wasn’t in full outfit – was he just exercising a little after the day job, the superhero’s equivalent of going out for a stroll?  No idea, these and other questions are still puzzling around in my mind.  The imagination wanders… it was a very interesting evening.

Just before Christmas I was in West Bragg Creek at Dave and Amarin’s home to photograph their family.

It was pretty cold but we had fun shooting outside under a full moon, clear skies and a few strands of Christmas lights. 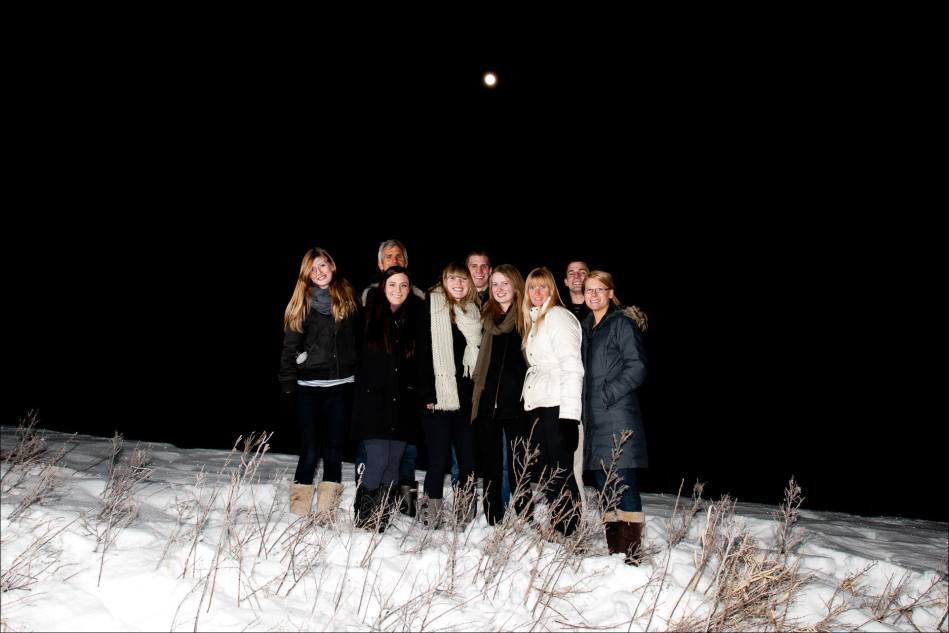 A great bunch of people and I appreciate them being game to try a few different scenes while freezing their fingers and toes a little bit.  A pretty photogenic bunch too I think.

Thanks to Amarin and Dave for inviting me to join them out at Fawn Hills and “shoot” their family.