The Edges of the Day – Sunset on Inle Lake 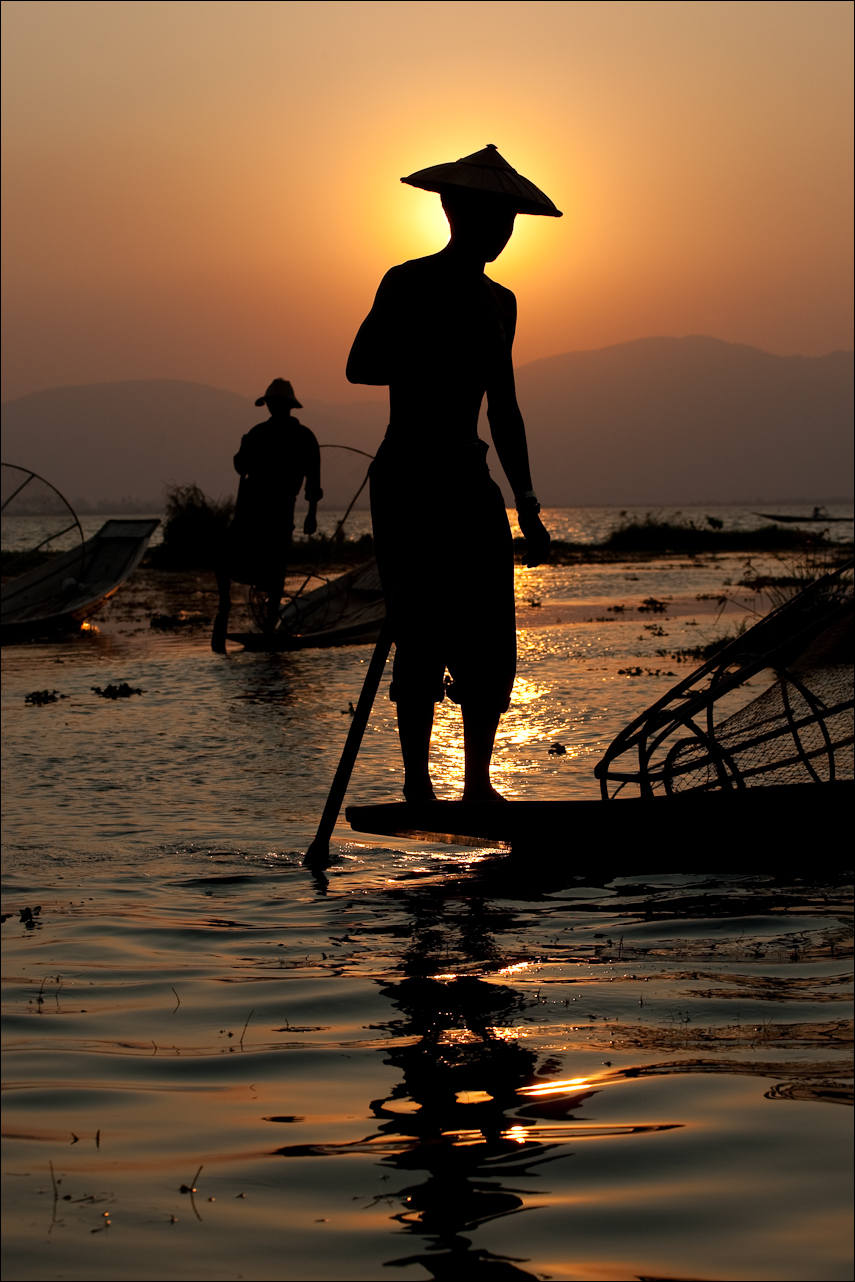 This is the second part of the Inle Lake Edges of the Day series.  These photos were taken around sunset during two evenings spent out on the water. 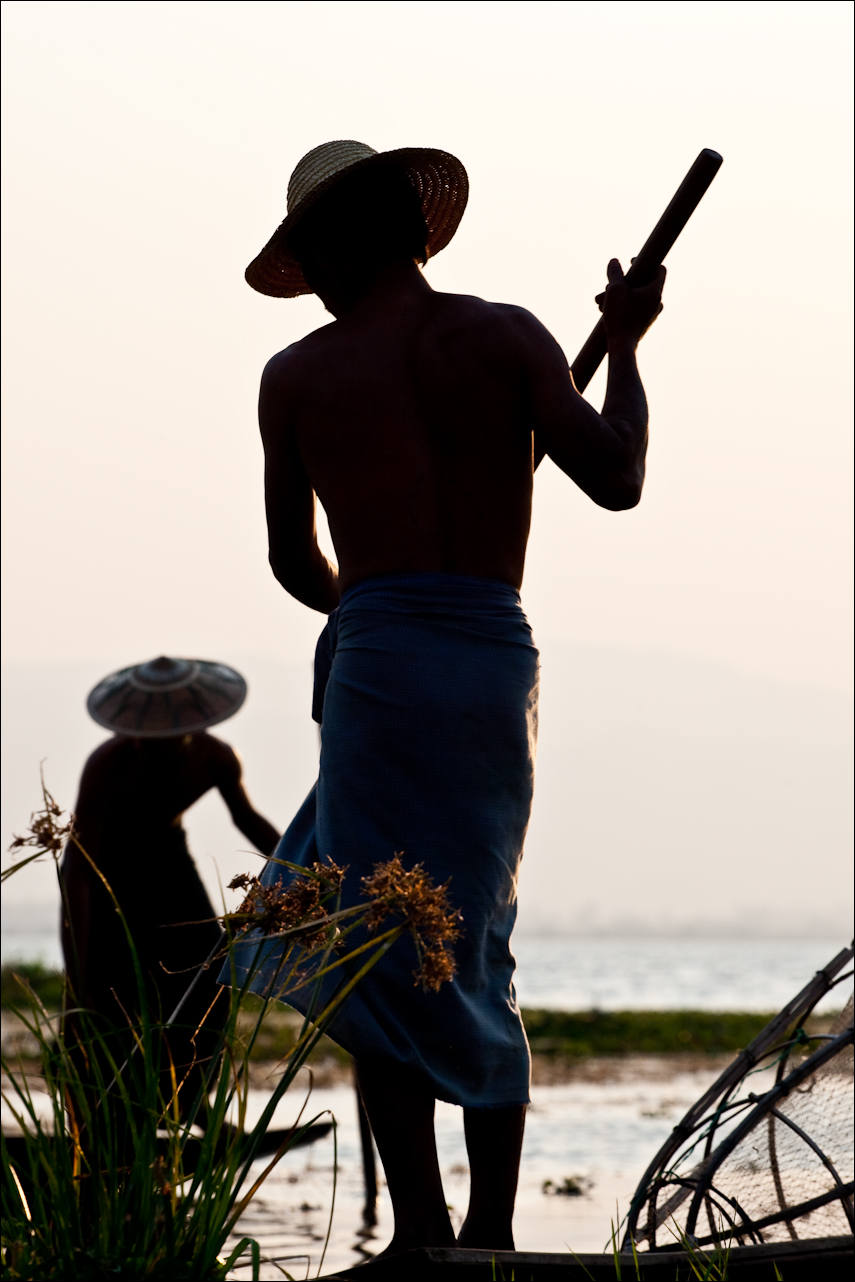 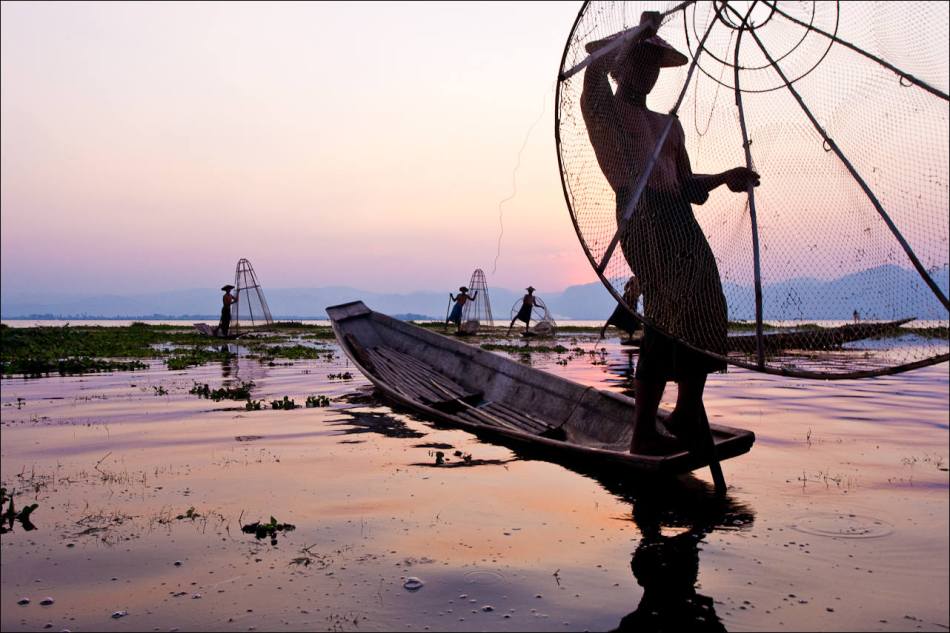 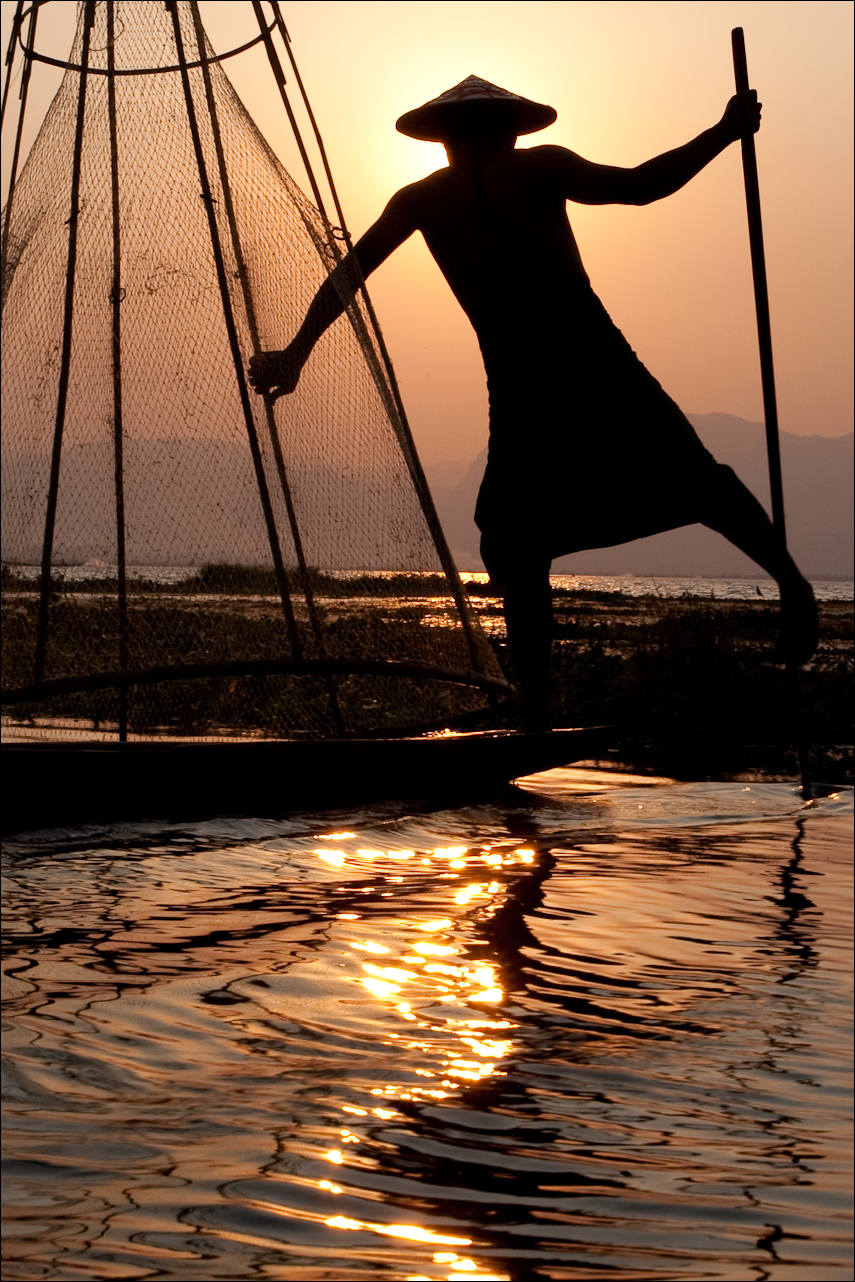 It was a lot of fun working with the falling light levels and exposing to reveal different amounts of detail from pure black silhouettes to overexposed reflections in the water.  Many different ways to shoot these scenes, I could stay there for another couple of weeks and not get bored just working with these guys. 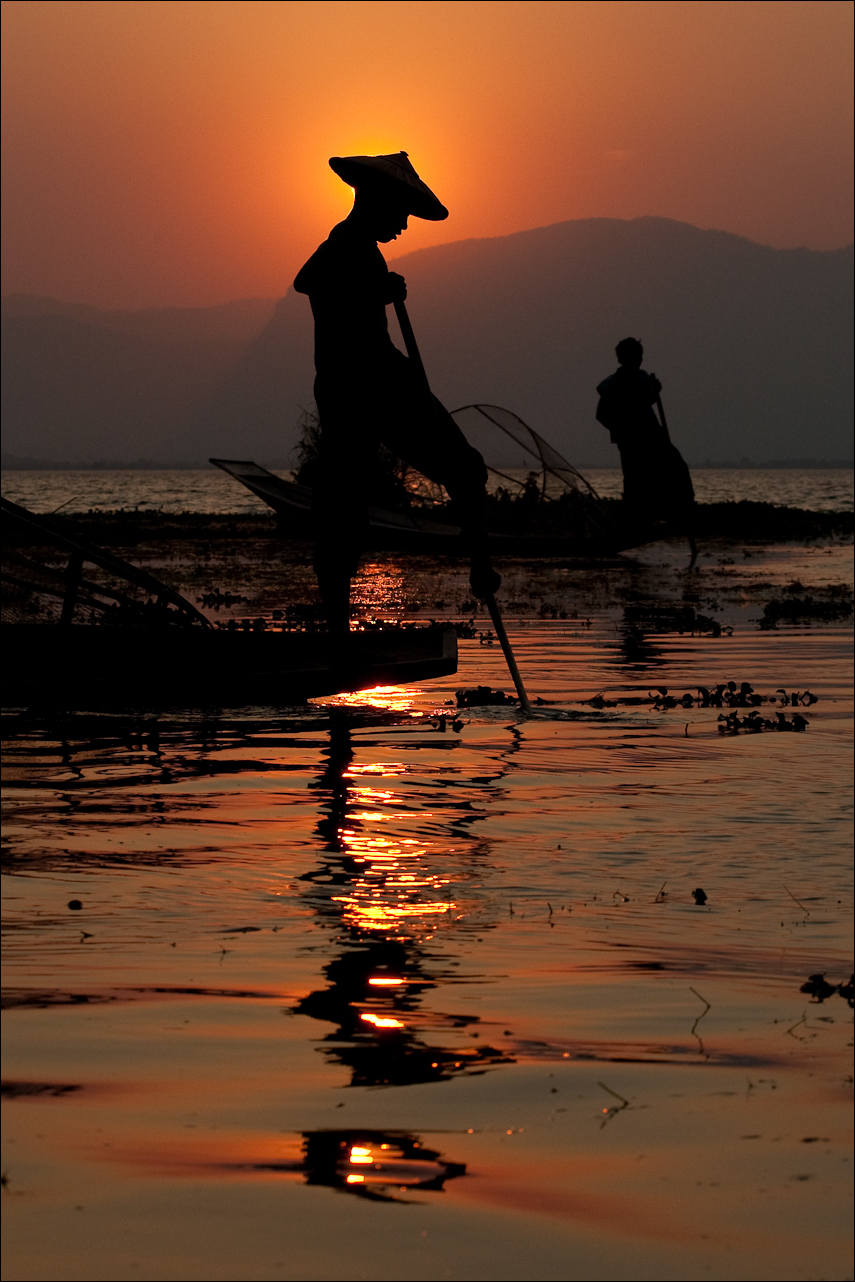 The Edges of the Day on Inle Lake

a smoke break on the water

Inle Lake is a lake unlike any I have been to before.  I was there for three days in February and each morning I went out on a longtail canoe on the smooth water and explored the lake, looking to capture some of the stillness and calm that preceded the sun climbing over the hills that rise above the eastern shoreline.  Here are some of the images from those mornings on the lake with the fishermen. 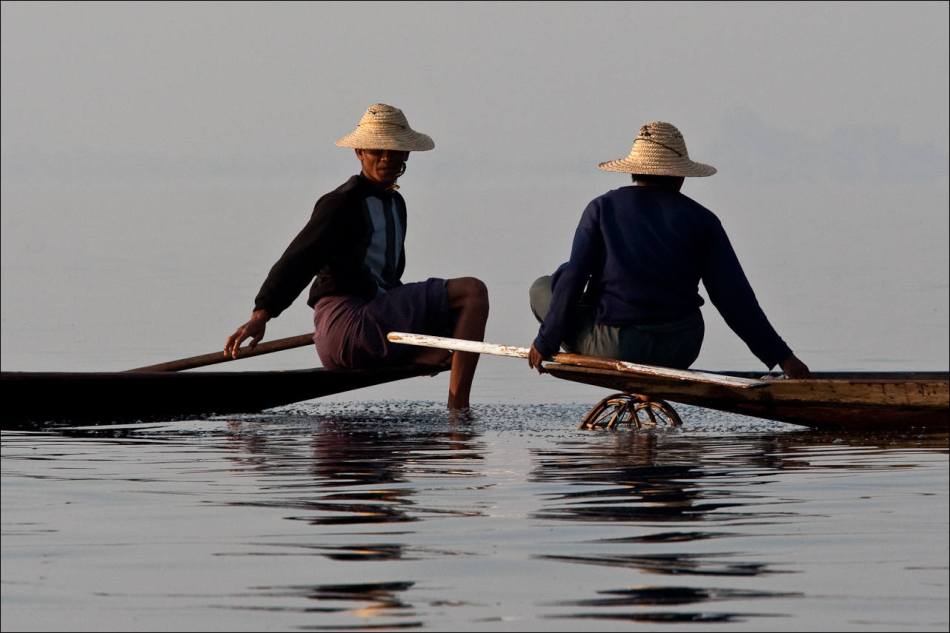 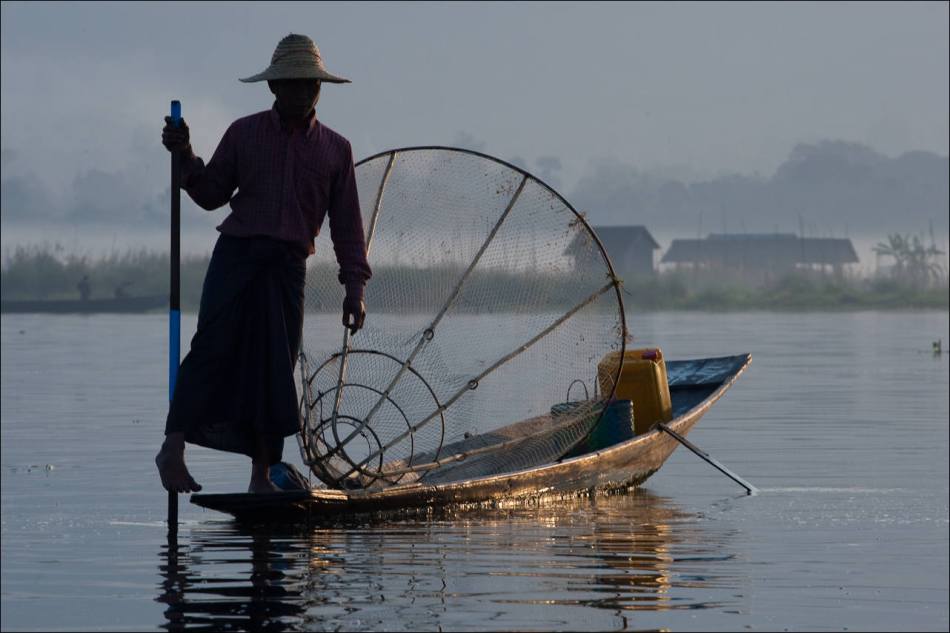 We maneuvered our canoe around the fishermen to work with and into the light.  Using longer lenses, we kept far enough from the men that we were not affecting their fishing.   Through our guide, we were told that these gentlemen did not mind us photographing them, they just thought it was strange that we found them so interesting.  Seeing the world through the lens continues to be an amazing way to experience life.

A short post with a link to a web gallery of my first set of favourites from my trip to Myanmar in February.

* If you can’t open the link, please scroll down to see the set.

More to come as I am still working through the library of images I came home with.

Thanks for checking out the blog and the images.

* The link is to a Flash based slideshow so for those viewing on an iPhone, iPad or other device that does not support Adobe’s Flash, I have included the images from the slideshow below. 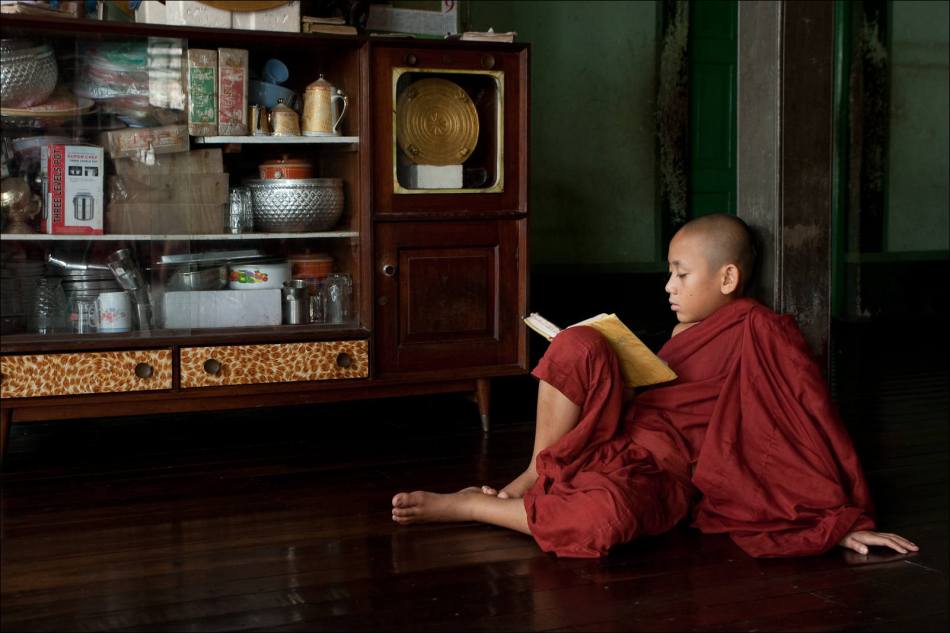 Sunset over U Bein bridge in Amarapura 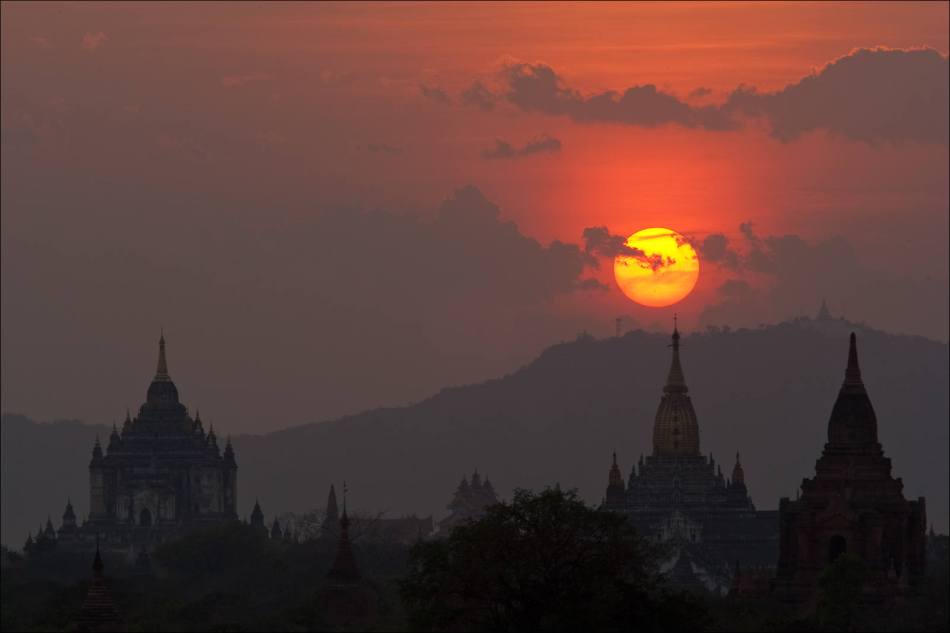 Sunset behind the temples and pagodas of Bagan

Senior monk at the Chaukhtatgyi Monastery

On the plains of Bagan

Devotion during the full moon festival at Shwe Dagon in Yangon

Early morning on the water at Inle Lake 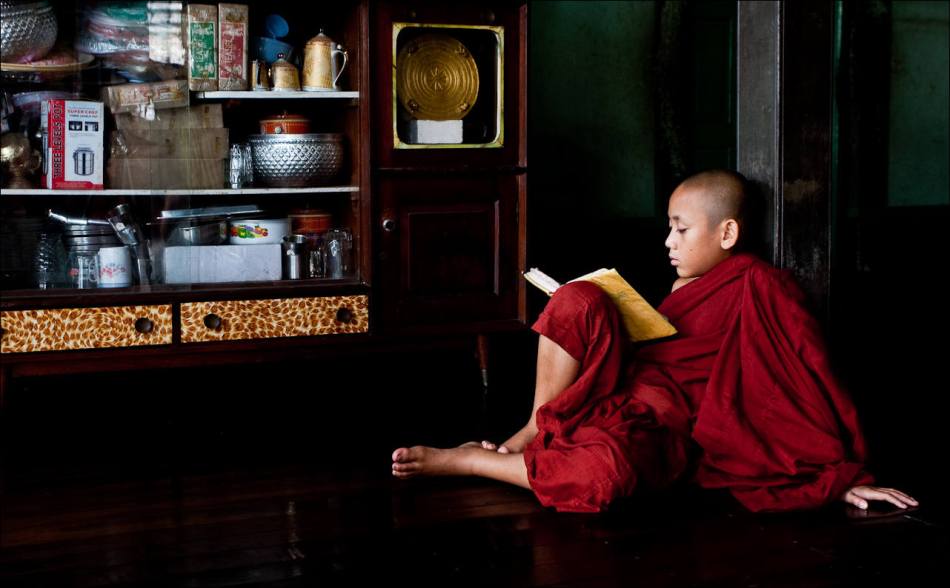 In Yangon, Myanmar’s largest city, lies the Chaukhtatgyi Temple which houses an enormous reclining Buddha.  We traveled to the temple, enjoyed looking at the impressive statue but moved on to the focus of our first day in Myanmar, the monastery attached to the temple.  The monastery houses monks both young and old.  It is comprised of a collection of wooden buildings that serve as dorms, classrooms, eating halls and meditation spaces.  We met the senior monk who offered to let us photograph some of the younger monks while they studied their scriptures.

Here is the senior monk in his living quarters on the second floor of one of the dormitories. 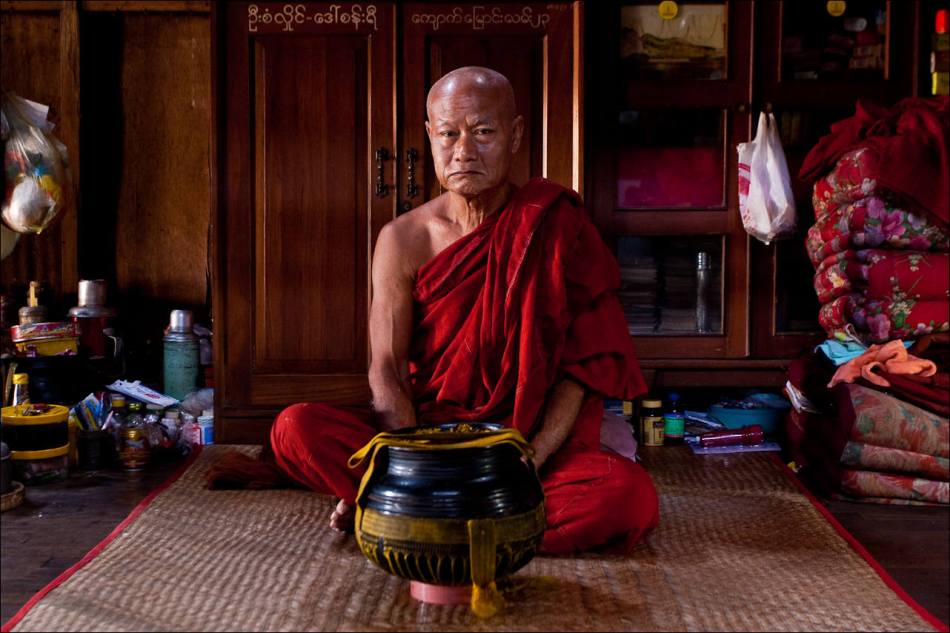 This group of boys were in one long, sparsely furnished room.  The students were scattered around the room sitting, standing or laying down on the dark wooden floor reading their books with levels of interest which varied from passive up to completely focused.  The younger boys seemed to be more the former with the older boys able and willing to devote complete attention.

The monk teaching these boys was a stern taskmaster.  While I do not speak Burmese, when he was not pleased with one of the students, it was very clear that whatever they were doing was wrong and should be quickly corrected.  He didn’t chasten often while we were there but when he did, the student under scrutiny amended the error immediately.  While some of the boys stole a glance, or even a smile, while the five of us photographers moved among them, they kept alternately reading and chanting as they had done before we entered the room.

It was an incredible scene to photograph.  Made all the more enjoyable as it was a window into the normal, daily lives of these young monks.  Definitely a world away from Canada and it set a very high bar photographically for the tour, coming on the first day at the first location we visited.  Hats off to Art Wolfe, Gavriel Jecan and our guide, Win-Kyaw Zan for this and many other great cultural locations.

The Fishermen of Inle Lake

I returned from Myanmar with several thousand images to work through.  I was able to spend a fair amount of time editing while on the road but it has still taken a while to start ordering the different subjects into some cohesive groups.  The first one that I have completed is a set of graphic art style images made of the fishermen on Inle Lake.  I have made this into a book and am expecting my proof copy within a couple of days.

First, a little detail about Inle Lake, Inle is located in Shan state in central Myanmar and is at an altitude of 2800 feet.  The lake is about 14 miles long, 7 miles wide and has an average depth of seven feet (up to twelve in the rainy season) and is roughly 50 square miles in area.  It is large, shallow and filled with reeds that sit just under the surface – I never saw the bottom of the lake during our three days spent completely in boats and stilt buildings on the water.  There are about 70,000 people living on and around the lake.  Most live in stilt homes of all shapes, sizes and condition.  The streets to all of the villages, large and small, are predominantly canals.  While I was there, the dry season was in full swing and the water levels were very low which had the largest visible impact on the small villages where there narrow canals were just mud in many places.  Dredging was constant and, beyond a bit of rerouting and a few pushes from friendly villagers, our boats weren’t impeded too much.

The fishermen ply their trade all around the lake and the river mouths.  They all work off small, flat hulled oar powered boats that they stand in back to navigate and then fish off the tip of either end of the boat.  Most fishermen man their boats alone but occasionally I saw two fellows partnering on one skiff.  The boats are mostly made of teak wood and are about 15′ long and maybe 3′ wide.  What draws particular attention, is their method of rowing.  They stand up using one leg to balance on the canoe, wrap the other leg around their long oar and propel their boat using a kicking motion.  When they are intent on moving quickly, they keep one hand on the top of the oar and then drive oar wrapped leg hard which results in them moving pretty fast.  While fishing, they hook the oar with their leg so that they are free to fish using both hands and can still maneuver their craft with a high degree of dexterity.  They fish using a tall, conical net which they drop into the water when they see fish directly below them.  Once in place, they push it down into the ground with one foot, keeping the other foot on the canoe, and then use a spear to skewer the fish through a hole at the top of the net which sits above the waterline.  It is a wonderful display of balance and strength as these men work from early in the pre-dawn, through the day and into dusk.  There are a number of species in the lake that the fishermen catch.  Of these, the Inle Carp is abundant and forms a staple of the lake people’s diet.

I will post a blog of the lake people, detailing the lives lived on Inle in pictures but in this series, I wanted to play with the constantly changing shapes and compositions of these men as they worked the lake.  I focused on the angles and patterns created by the fishermen, the boats and the nets.  To create the graphic effect, I overexposed the shots while I was on the lake, then converted the images into black and white and adjusted the contrast in Adobe’s Lightroom later.  Shooting early in the morning, I worked in low contrast light mostly and was able to eliminate the horizon, the surrounding hills and other distracting background elements in camera via the overexposure approach.  These men were concentrated on the fish but tolerated our presence.  We provided the men photographed with a tip as we shot them for almost a half an hour.  They were not distracted by the cameras and I was pleased to be able to capture their regular movement which I found very appealing. 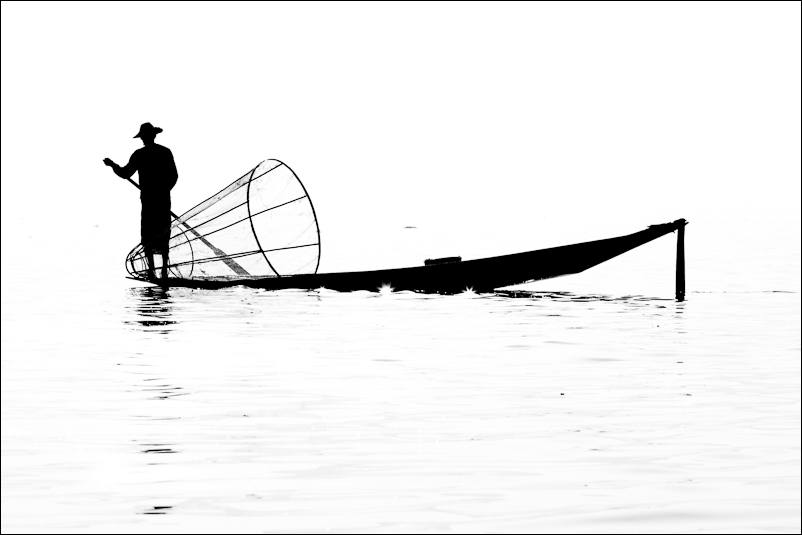 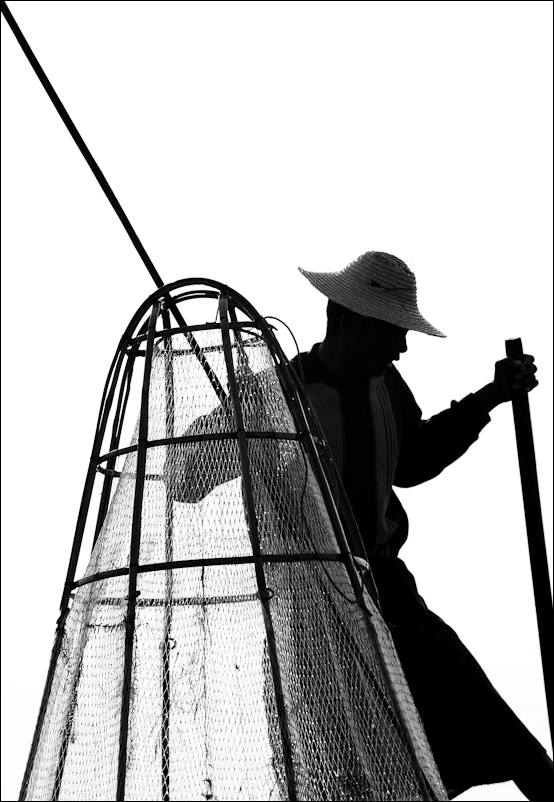 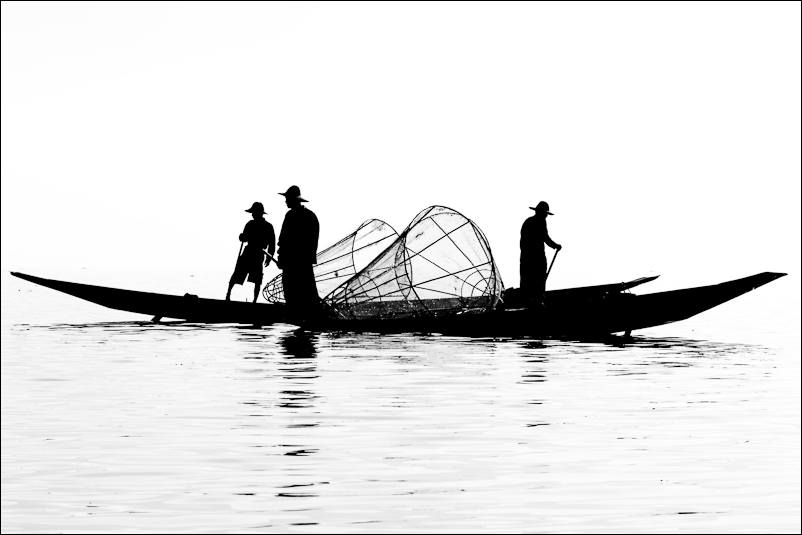 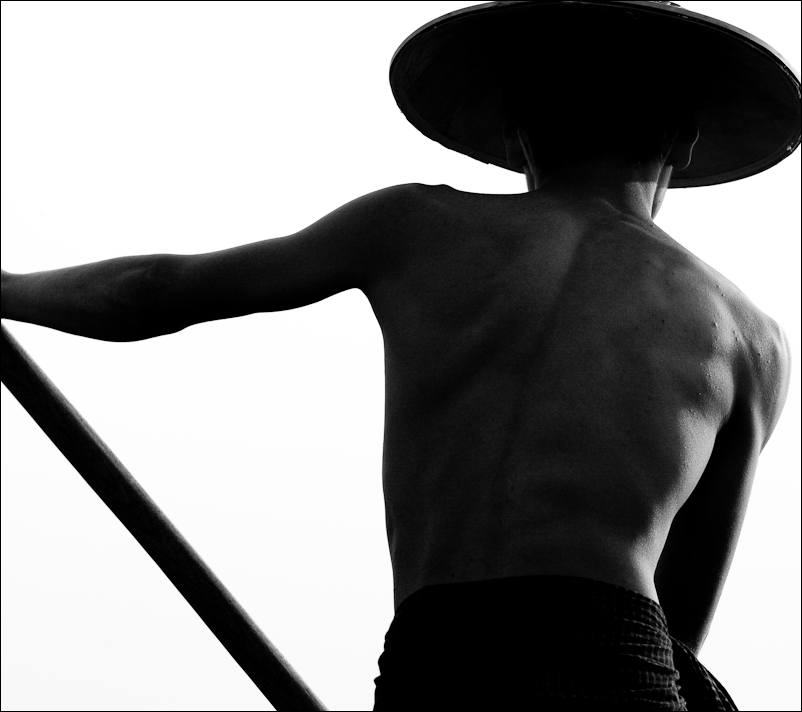