Exploring the Rockies: a few summertime adventures in the mountains 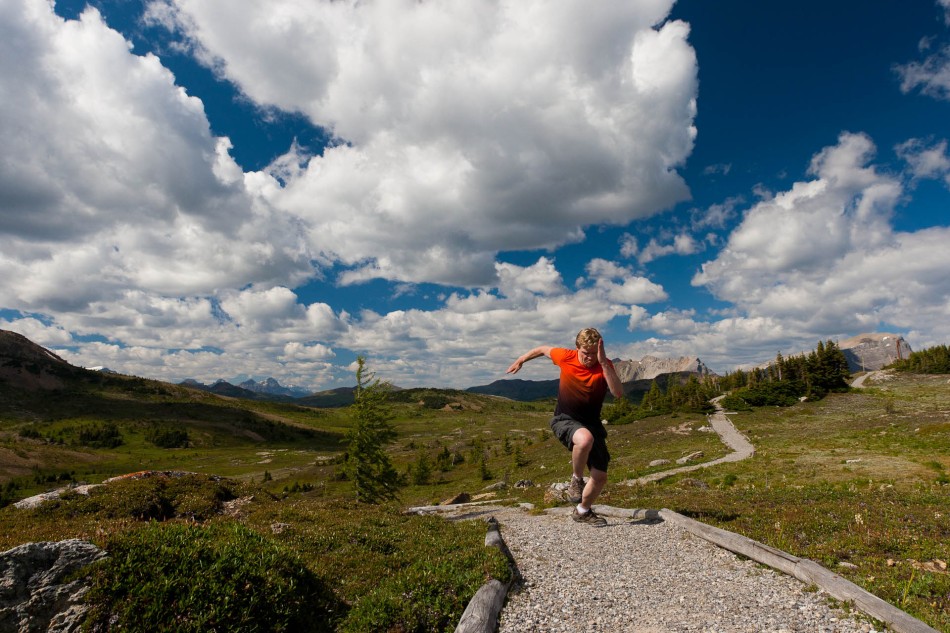 I was working on some images of the active lifestyle in the Rockies for a client and thought the summer set would be fun to post.  With fall ready to give way to winter any day it was nice to recall the summer before the snow flies. 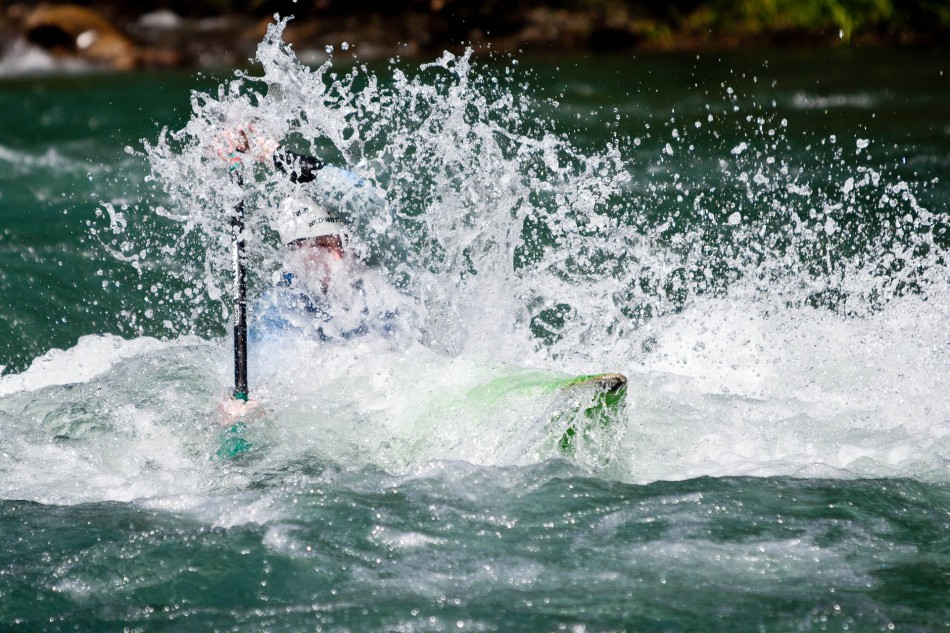 In July Jeff and I met a kayak team on the Kananaskis River during one of their training sessions.  We definitely had the easier work scurrying over the rocks photographing compared to waging war against and conspiring with the water.

When I was in the Tonquin Valley with Art Wolfe and Gavriel Jecan, I had a minute to photograph Gav as he was bouldering.  That ended when we noticed a grizzly bear among the rocks a stone’s throw away.

This guy, Chris as coincidence had it, was visiting friends in Jasper and came to Horseshoe Lake for one purpose: to hurl himself off this cliff about seventy feet above the lake.  I remember doing some decent jumps but shooting him descending was a different perspective.  I was impressed with his lack of hesitation and the nonchalance displayed when he swam back to the shore afterwards.  It wasn’t enough to convince me to follow suit though.

I photographed a group of para-gliders, hang-gliders and other fliers from their launch at the top of a ridge above Golden in British Columbia.  Watching them spiraling  upwards on thermals, as this lady was doing in the image above, was amazing.  I came away with a profound appreciation for the grace and the silence of these engine free forms of flight.

We went into the Tonquin Valley in August along a trail that started in forest, came up above the treeline and then slowly descended towards Amethyst Lake.  In the image above, our guide Sarah is leading our group out of the valley.  Seemingly not as adventurous as some of the other images, throw in a trailside bee hive and a six hour trek through rain and sleet, and I think it belongs.

Cody Cover Chuck during his championship ride in the bull riding event at the 2011 Tsuu T’ina Rodeo on July 24th.  Cody’s young, just in the tail end of his teens, but has a long string of championships through youth and junior rodeos.  The way he rides, there would be no surprise if he earns a spot on the pro circuit sooner than later.

This year’s edition of the Tsuu T’ina Rodeo was great fun.  With people attending from across North America, this rodeo has a great breadth of people involved in competing, organizing and enjoying.  The level of competition was really high this year with some cowboys making some impressive rides.  The finals were on Sunday and I was able to work with some of the guys managing the chutes to get great access.  Some of the resulting images are from quite a different perspective from where I normally shoot the rodeo.

The athletes, competitors and visiting people are very friendly and this is the second year in a row where I have made a couple of great new friends.  Robert and Dave, I hope you like these images as you guys helped me so much by allowing me to stand on top of the gates and letting me know when the bulls were moving up – thanks! 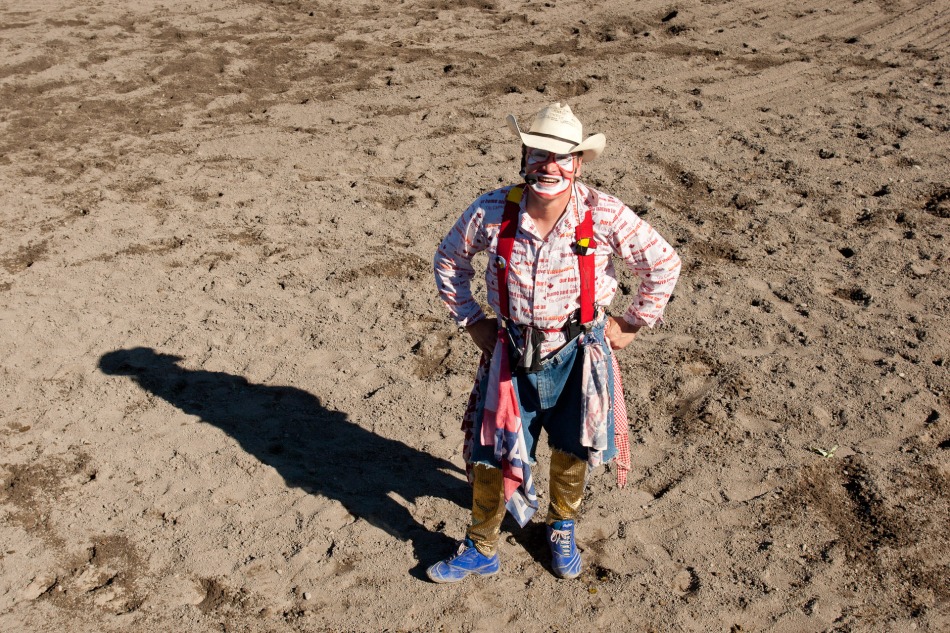 This fellow was a funny guy and a very good rodeo clown.  The clowns are some of the hardest workers in the corral – this guy was no exception.

I love watching the barrel racing teams sprint towards the line after the last barrel.  It provides a great opportunity to capture the motion of the rider and horse, especially when they are both leaning into it. 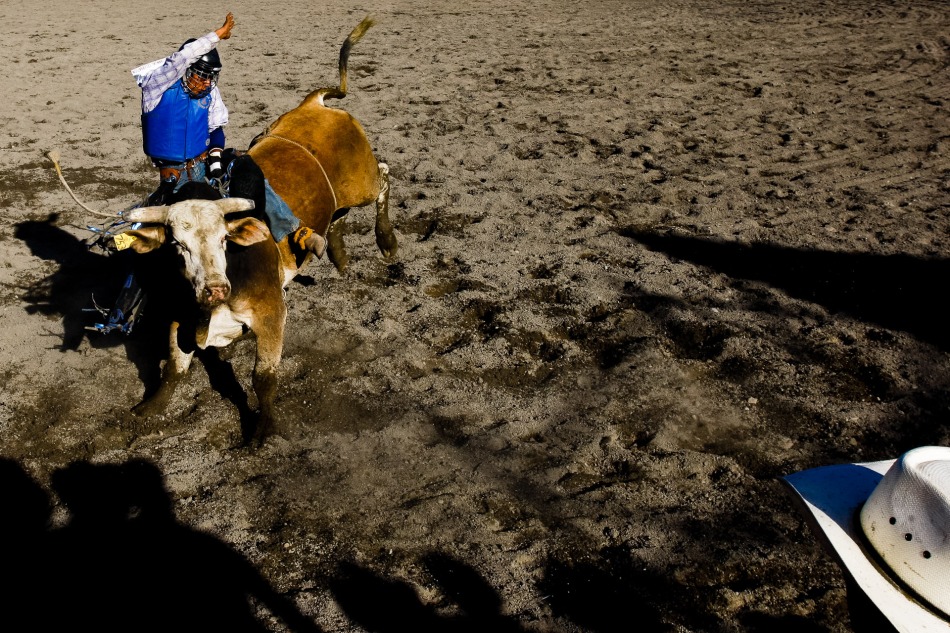 This cowboy had a really good ride.  When the bulls get out of the gate and then start jumping and spinning, there is every chance of a great score… if the rider can stay onboard. 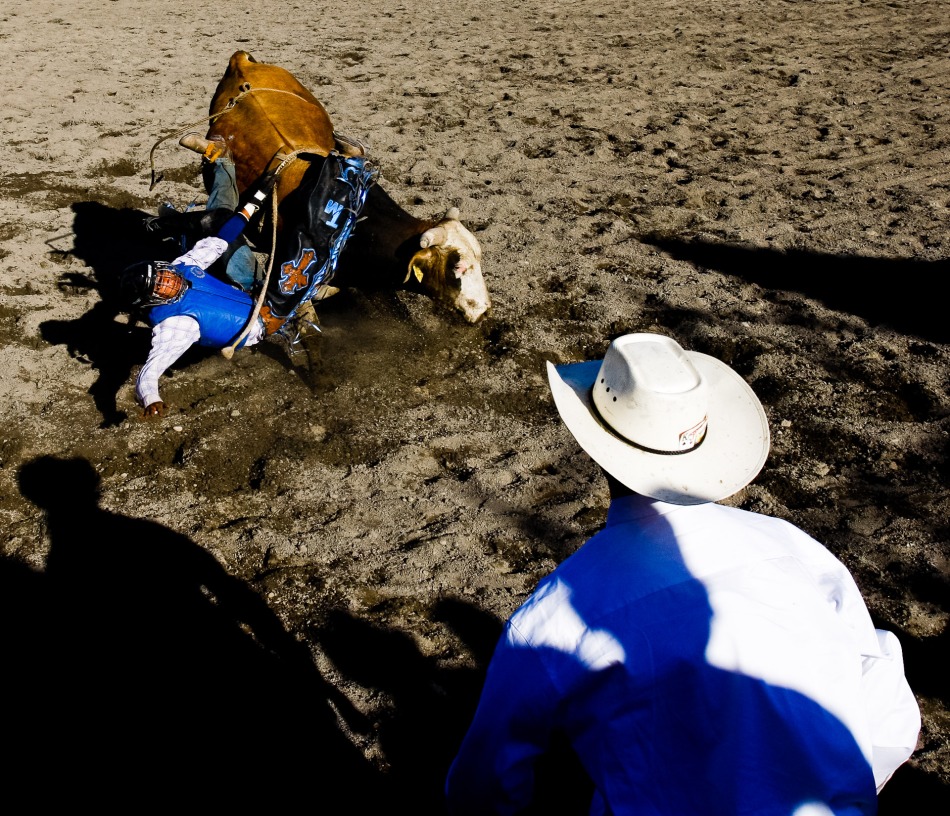 Another great rodeo at the Tsuu T’ina First Nation near Bragg Creek.  Thank you to all of the cowboys, cowgirls, horses and bulls who put on a great show.