Working with clay in Ni Xi 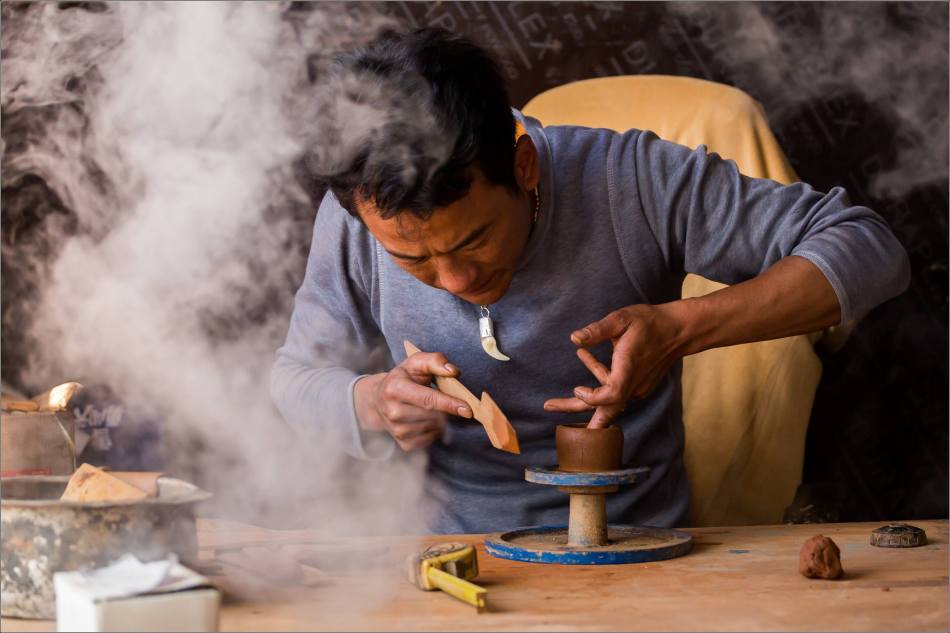 A good friend and great photographer, Jorge Sarmento, and I rented a van and driver yesterday and drove out into the countryside.  We didn’t have any set agenda so we were just exploring the mountains and valleys as we went.  Our driver was a Tibetan and was from a small village called Ni Xi about 40 kilometres from Shangri-La.  We found that out when we asked about visiting that town which is renowned for its black pottery which results from baking it in the kiln without any coatings or glazes.  He drove us to his friend’s home who is an apprentice potter.  When we arrived, we asked if he would mind if we photographed him at work and he had no problem with that.  As we watched he created a tea-cup on this small wheel.  It was great to watch him work with his hands and tools to shape the final piece.  Along the way I learned that he was five years into his apprenticeship but I was not able to ask how long he would study under his teacher.  I absolutely loved watching the craftsmanship and ease with which he worked.  There was mastery in his work.  The two men were smoking while the cup was being made which gave Jorge the idea to increase the volume of smoke.  We had a puff of smoke blown in through the open window, with both men’s approval, which rolled and wrapped around as seen in this image.  It was a great idea and elevated an already compelling scene considerably.  Thank you Jorge!