A long, cold (and worthwhile) wait

The photograph above of the snowy owl in flight was taken late in the morning on February 11th.  This flight followed a long wait after some good early action.  The wait started with a feather cleaning session on an entrance gate which was interrupted by the approach of this truck which prompted the bird to fly to a more isolated spot.

When the vehicle drew too close for the owl’s liking, she launched and flew along the fence line towards the sun.

She didn’t go too far – landing on a post roughly 100 metres away. 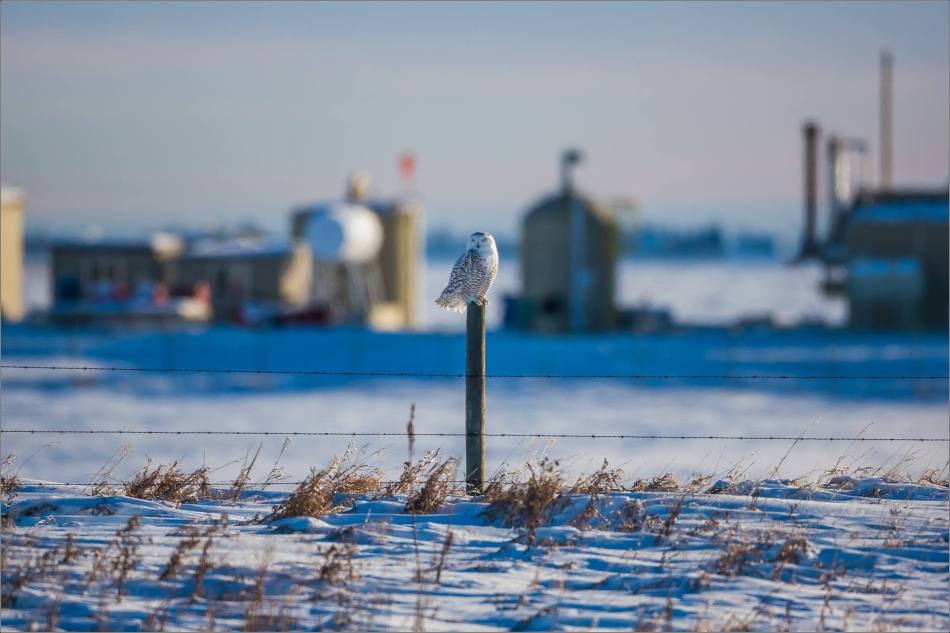 We were separated from the owl by a fence line of our own which ran parallel to hers and they were about 80 metres apart.  That distance was just fine for me and with a 500mm lens made the subject a reasonable size in the frame.  From where I was, the sun angle and the background were both far from ideal.  I walked along the fence line and found a new location which allowed for improvements in both areas.  I kept moving around now and then to change the scene.  The owl did not – she settled in and did not leave the post for a long time.  There was no way to know at that point, but it would be 2 hours and 38 minutes before the snowy would return to the air.

The potential for a special moment – maybe a dive close to our line or a flight with the sunlight catching her eyes – kept eyes glued on her and fingers resting on the shutter buttons.  At a few different points, a drift of snow buntings buzzed past the owl as they flew to different spots around the field to forage.  For her part, the owl watched these comings and goings with minimal interest.  For me, these sorties were welcome bits of action. 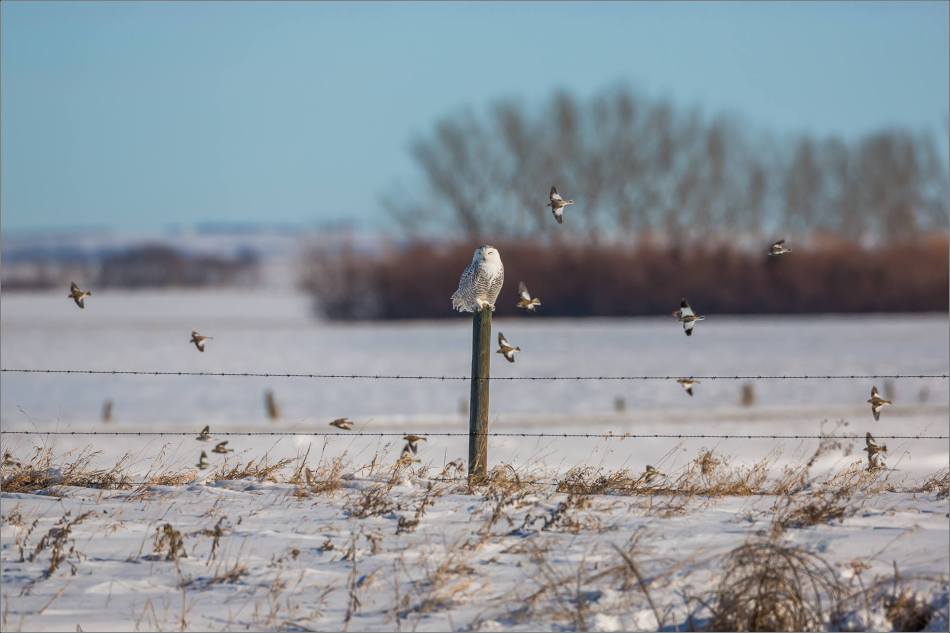 Along the way there was more preening, dozing and the occasional stretch.  The one below seemed like a yoga position and was one that she held for several seconds.  Maybe this was all a part of her morning meditation?

Just before noon, the wings opened and she pulled her body down into a crouch.  She paused for a second and then pushed off into the air.

The snowy flew along her fence line which allowed for a few nice photographs before she passed us, crossed the road and landed in the snow near the top of a small rise that was a couple of hundred metres away.  My fingers were aching from the cold so this was one of the rare times where I was no longer interested in continuing to shoot.  I was happy to get in the truck and get the heat going. 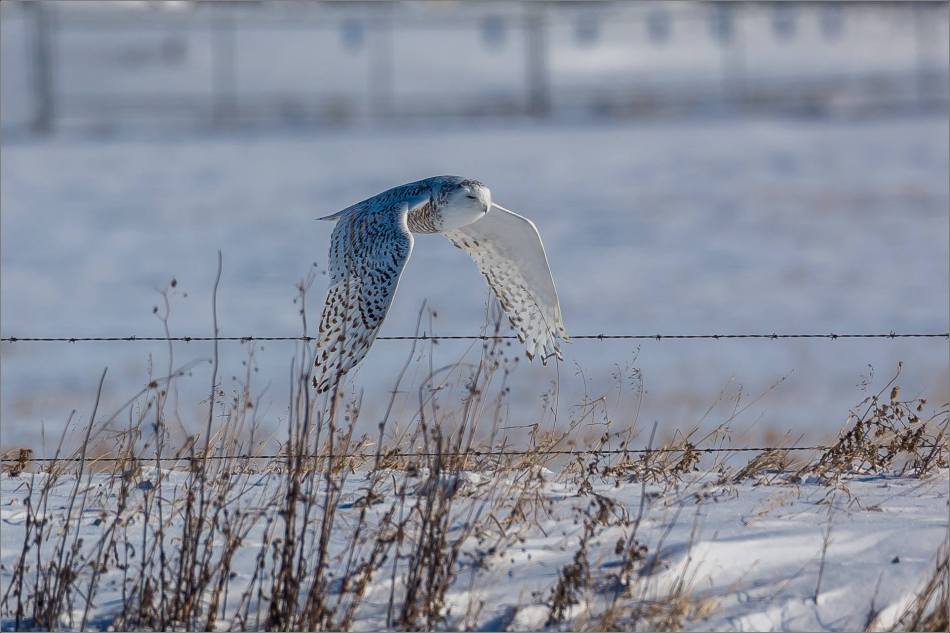 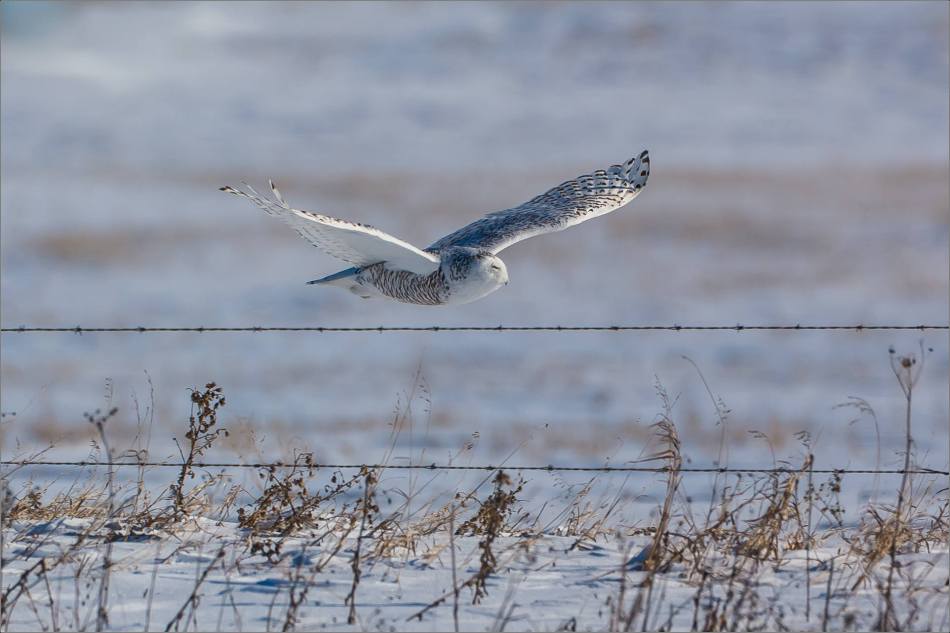 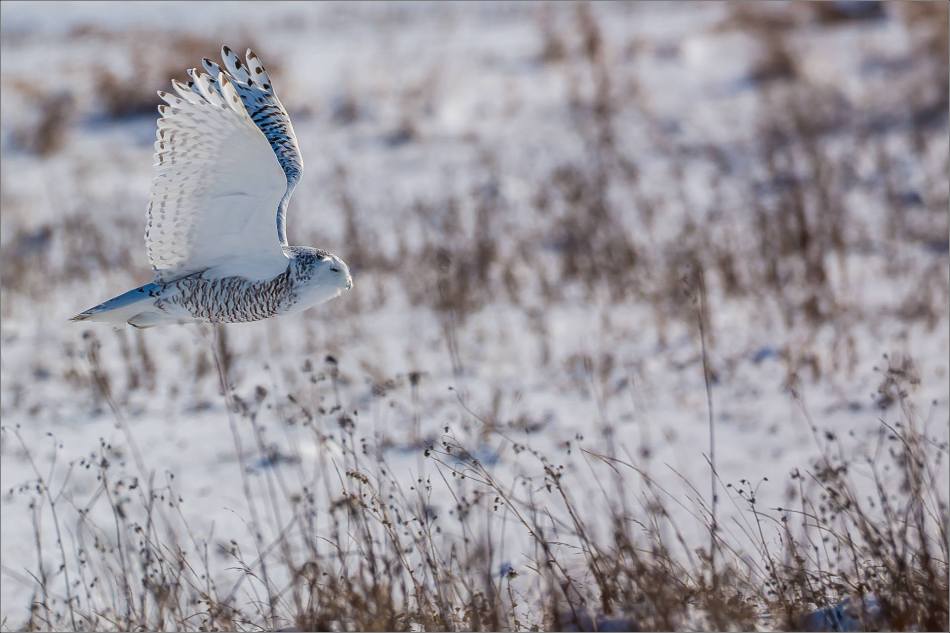 This entry was posted on February 17, 2017 by Christopher Martin. It was filed under Nature, Owls, Wildlife, Winter and was tagged with alberta, animal, bird, Bubo scandiacus, Canada, flying, snowy owls, wildlife, winter.