A ruckus on the water

I went to Wild Rose Lake a few days ago to see what animals might be active early in the day before dawn.  I’m waiting for the loons to return to the lake so I visit regularly.  On this morning, a beaver and a muskrat were paddling along different parts of the shoreline and there were small bands of ducks nearer to the middle.  Thin bands of fog blew over the surface and I stopped to watch that dance for a while.  It was a tranquil scene supported by gentle calls from the birds including three Canada geese (Branta canadensis) that floated by. 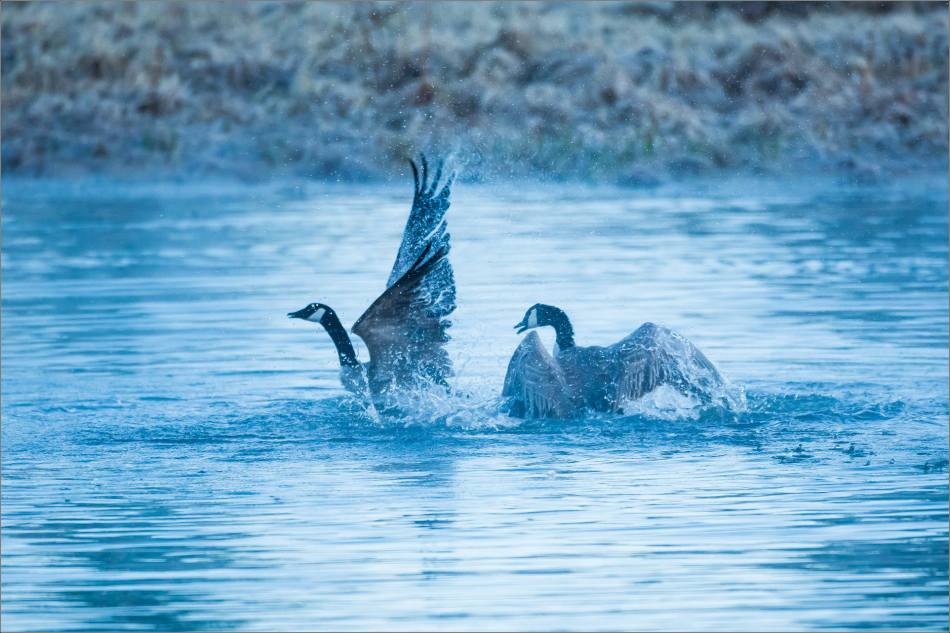 And then, all hell broke out.  Apparently the geese were not three friends but one couple and a third wheel.  The boyfriend apparently had enough and changed his tone from soft quacking to loud, angry honking.  That happened right when he lunged at the other male and the two were in the equivalent of a back alley brawl – maybe a better description would be a pond pounding or a mid-lake mashup.  The beaks were the main duelling weapon but wings and bodies were used to attack and defend as well.  The main fight lasted less than a minute and then the chase began.

The male in the relationship trounced the other one and sent him scooting away.  The chastened goose started beaking off from a short distance away and that seemed to rile the champion up.  He then swam/flew to the instigator and nipped at him until he dove under the water.  Popping up several meters away, the cycle then repeated itself six or seven more times.  It was crazy to watch!

In the end, the lone goose ended up flying across the lake and the lovebirds continued their morning swim.

This entry was posted on May 6, 2015 by Christopher Martin. It was filed under Birds, Nature, Wildlife and was tagged with alberta, bird photography, bragg creek, Branta Canadensis, Canada, Canada Goose, wildlife photography.