… Not in Alberta though.  Bobbi and I were in Sedona, Arizona last week and we learned that there was one species of Hummingbird that stays in the area through the winter.  In the spring and summer, there can be up to 14 different types of Hummingbirds there but only the Anna’s Hummingbird (Calypte anna) will spend the full year. 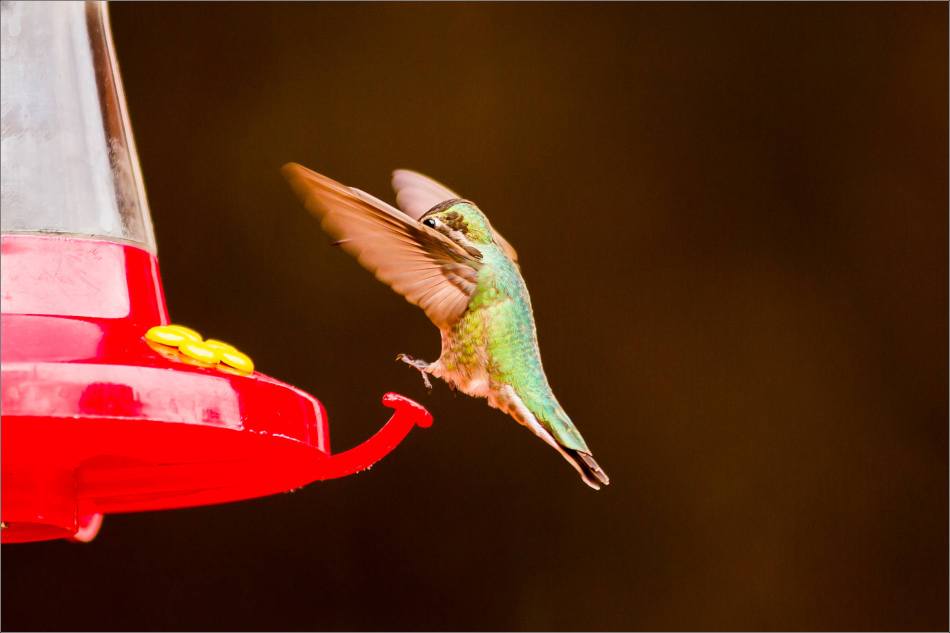 I went to the Red Rock State Park where I had been told a couple of these birds had staked out the feeder put out by the park staff as their territory.  Tucked off to the side of the visitor center, they have a sheltered garden with native trees surrounding a few benches and various bird feeders catering to those who overwinter nearby.  The Hummingbird feeder is in a slightly unusual position beside an exit door and close to the large bay windows of smoked glass.  I suppose it allows people to stand close to the window on the inside and watch these speedy fellows at close range.  I liked the clean background afforded by the opaque window so it suited my purposes.

I believe there were two individuals that I saw but they never appeared at the same time so it could have been one, two or more as I’m not familiar with this species and could easily mistake the unique number observed.  Regardless, I was entranced by their iridescent feathers, the speed and precision of these birds as I always am with Hummingbirds.  It will be several months until they return to my home so it was a treat to spend some time with them last week.

This entry was posted on February 4, 2014 by Christopher Martin. It was filed under Arizona, Birds, Nature, Wildlife and was tagged with Anna's Hummingbird, Arizona, Calypte anna, Hummingbirds, Red Rock State Park, Sedona, winter.