Snowy owls on the Prairies

The past weekend involved a lot of Snowy owls so it was fantastic.  On Friday, I made a solo run east of Calgary and roamed the country roads between Langdon and Strathmore eager to find the white owls which enthrall me.  I found one perched on a fence post warming under bright sunshine along  and had several minutes to enjoy watching her before a tanker truck roared by and the sound spooked her off the roost. 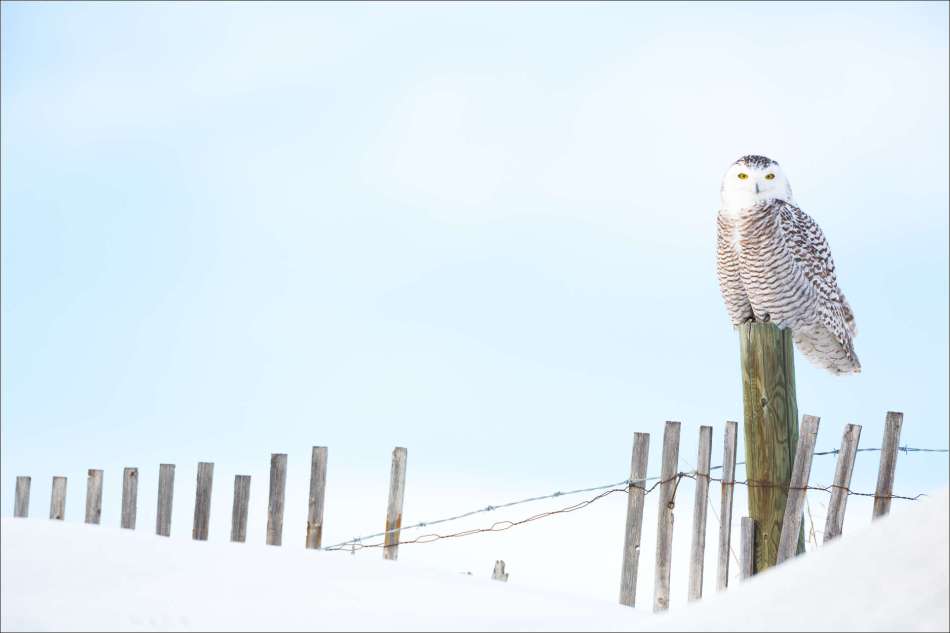 I say her because females Snowies often have dark banding  – often but not always as adolescents of both genders have heavy banding as well.  It used to be thought that males were usually white with little or no banding and the females were as described.  There are convincing arguments for and against however I found this link persuasive.  It has helped me to realize that I would need an expert’s opinion before I would state any Snowy owls gender in absolute terms.  So, please allow me the license to use he and she with these owls so that I can avoid referring to individuals as “it” which seems to drop them into object status rather than that of a living creature.

The owl took flight across Highway 901 and flew out over the fields.  I watched it glide low and out of sight behind the rolling hills to the southwest.  I zigzagged along the roads in the same general direction and found her on a telephone pole scanning the landscape.  I pulled alongside slowly, set up my camera through the window and got comfortable.  Fast forward half an hour and she seemed to lock onto something out in the grasses.  When she did launch it was under a cloudy sky which makes for an interesting contrast of white on white (as in the image above).  I love watching the Snowy owls fly and then glide low.  She dove down in the middle of farmland and settled for several minutes on what seemed to be a successful kill.  She was a long ways out so I headed off along the crisscross of back roads. 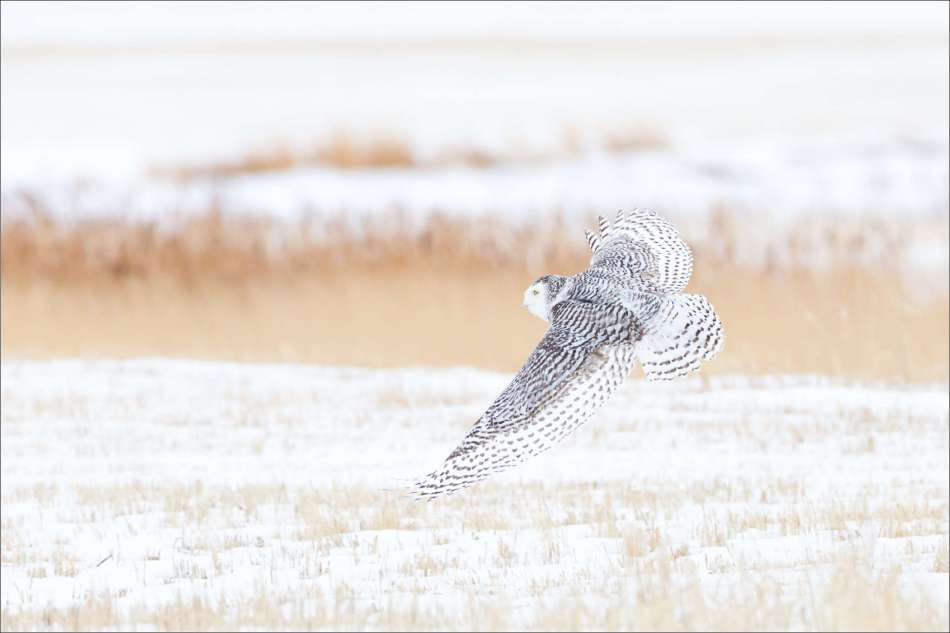 About a quarter of an hour later I found another owl in a different field.  I pulled off, set up and waited to see if this owl would fly in my direction.  After five minutes it flew parallel to the road I was on and then swooped up to another telephone pole.  This owl was actively hunting and moved around a lot over the next hour.

The highlight was when it perched on a fence post near the road where I was parked and we looked at each other for over a minute before it went over to a higher perch on another pole. The evening was coming in slowly and I left the owl once it had flown up to a very tall transmission line tower where it was glowing in the sun against a dark cloud background.

As the light failed, I retraced my steps back towards the highway but had a visit with one last owl, this one a male (maybe).  The soft pastels to the east and the glow from the west on the white feathers were beautiful and I photographed him until the darkness overwhelmed my camera’s sensor.

And then, on Sunday, my wife and I took the kids and one of their cousins to Drumheller to visit the Royal Terrell Dinosaur Museum.  This allowed us to search for owls on our drive there and we were not disappointed with the weather or with what we found along the way.  The blue sky was a change from Friday’s mixed weather and always provides a great background for white birds. 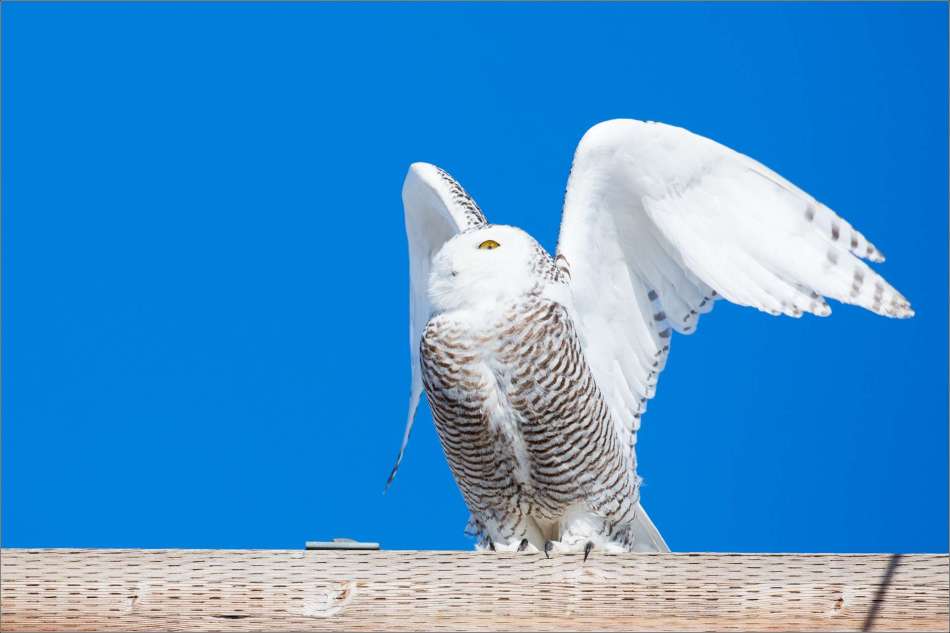 We saw several owls and all but one lingered on their perches for 5-15 minutes before alighting or us moving on.  This allowed the kids the opportunity to watch them and appreciate a magical part of nature.  They had a great time with my son surprising me the first time that we drove away from one bird, saying that we should stay and watch a little longer.  Normally, having grown up with his dad always stopping to photograph wildlife during walks, hikes, rides, drives, etc., he is often anxious to get going again – not this time.  I think the Snowy owls cast the same spell on the children that I have been under for almost two years now. 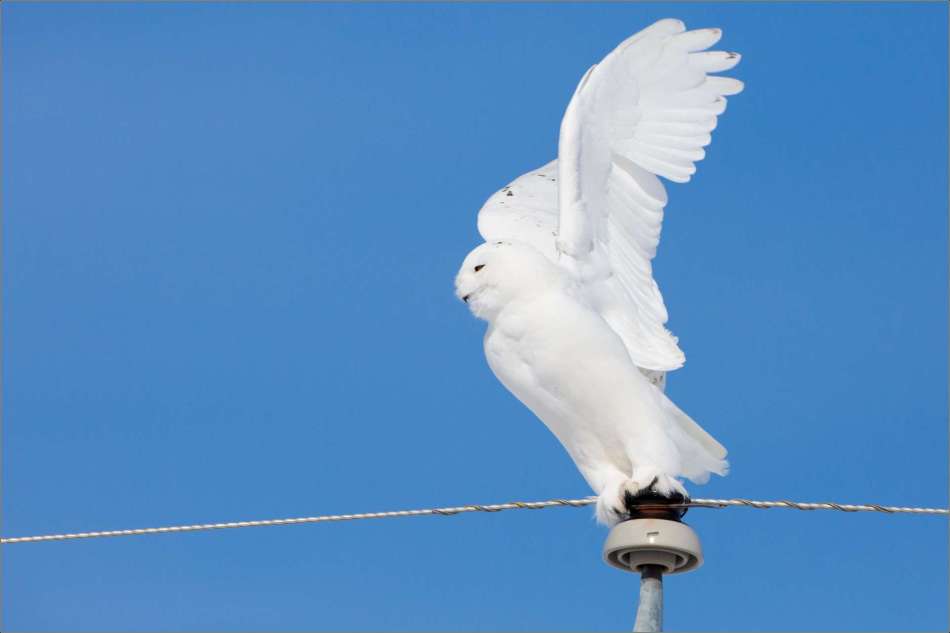